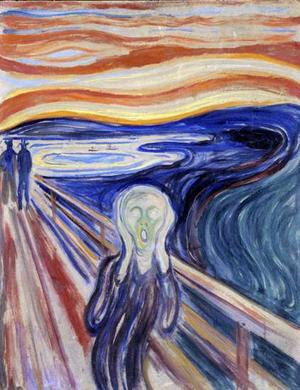 
I DON'T post rantings here..lots of reasons and one of them may show up and read this too...but, my opinion is MINE, I get to vent. NO harm in getting it all out once in awhile with caring horsey friends...since I choose to not gossip at the barn...and my poor husband just moans the day , each time it is a horsey complaint! SO you guys are my outlet...well today you are!

I had a wonderful plan yesterday of showing up on the normal Monday, trainers day off, so I can count on riding in the arena without bothering anyone with my mare....if I choose to go in there.
She can have outbursts of frenzy. It freaks the normal dressage folk out for her to do what she does. So I am VERY CONSIDERATE OF OTHERS, I stay away from making them uncomfortable with anything. I ask before I do and I also just don't do- if there is not the right person there . It is the way I am I like to AVOID conflict!
I do believe my mare's disdain for the arena came from her past of being abused and all tied down and made to be falsely collected without being in shape for it and without any consideration for her mind. Ridden for 30 days straight, with a western saddle that did not fit, by a very large man(I hear) that had tons of leverage. The saddle got put back on her every day over open sores with cellophane over the raw spots.... She was abused and it just pops out sometimes...during lunging, and riding..only in the arena though. Also, my sister that bred her Dam and started her(then sent her to that ill man) had her out to pasture for near 7 years. her work ethic is nill. I do think all that has something to do with the mare I inherited!
She is perfect on the trails as far as response to me asking for anything. She just has an affliction to circles and anything that makes her all tight and tied into frame. And with me getting back into riding with HER...wow, the combo has been very enlightening. We have made huge strides in mutual understanding!
I have gotten a lot of progress in the last 3 years ...5 saddles...7 trainers, teeth, back, feet, neck, hocks...
all part of the makeover that has gotten me here.
Only 2 trainers have done right by the mare and I. Most just tell me that she needs some apparatus to MAKE her do what I want, or they just take my money and waste my time trying to make us fit into some lesson plan that excludes her and I..Not creative and NOT trying to help US!
The fact is I can't afford lessons now. You know, changing jobs and "economy happens" stuff.
My last trainer really did us a disservice BUT-through some of our clinics at my current facility with Colleen Reid http://www.electricschoolmaster.com/ I have come to realise my mare does have potential, but I do need direction from someone like her. Until I find that someone...I have come to the fact that the only time I ever knew the mare liked the arena; is when It was an outdoor one- don't have that where I am- or when she was doing ground polls and jumping.
She loves to focus on something and really is perky when she does. 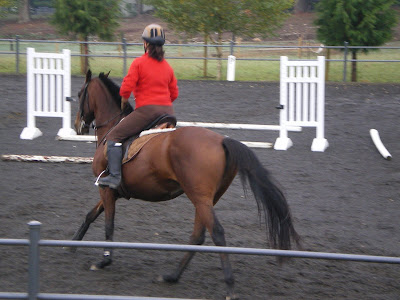 Though her expression here does not show her enthusiasm! I think we had just begun the lesson and she was thinking Arena thoughts!
She did very well last year, jumping over at another stable I found, quite unusually so. I met the owner in the hospital! I was visiting a friend whose horse had run her down while she was ground training him..broke her leg, and this owner was in the hospital room with her.

Any who.... all this to say, yesterday, I show up at the barn and all my friends are there grooming, readying themselves for a ride. me too...I was actually going to ride in the arena for the 3rd time since a huge blowout with the mare this summer. I pulled the draw reins out of retirement and was putting them on her.(more for weight than use) She went well years ago when I did use them..it was just hard having double reins.
All of a sudden, the BM comes over and tells me that the owner and the trainer wish to speak with me....bad timing folks...have a time limit and the horse it tacked up, and Everyone is now looking at me..I am getting "called into the office". I hate things like that!

They proceed to explain to me that I am not going to be allowed to jump in the arena.

I think I have a training plan for the mare and whoooshhit, Stomp! Something about insurance, safety, knowledge.

Blow it out both sides- it was coming !

I said,..."this feels like control and fear to me". "No, it is the insurance and your knowledge"...then I am asked to give an oratory on jumping procedure and spacing and......you get my point. I sure as Heck don't remember this on my boarding agreement(NO JUMPING IN THIS EQUINE FACILITY- you may hurt yourself!)

My newly arrived friend ,with her green Thoroughbred is going to be allowed to jump. And When did my friend do her oral or otherwise jumping test for approval?

Funny thing was ..She was jumping as we spoke! WHY does the insurance cover her?

SO -when I said, "she and I planned on being accountable with each other during our arena jumping times." "NO! Absolutely not, she is not an instructor" Then,( puffs of smoke rising up) they tell me the reason why she can jump is that she used to teach jumping. ( Oh, so she WON'T GET HURT, I see!)

I signed all the release forms to my life when I came to that barn too.
Let me explain something here:

When I say I want to jump...I mean cavalettiis forever...then ground polls(*though we DON"T have safe ones at our barn, nothing to secure them with!)
Lots and lots of ground polls....then maybe a cross rail on blocks, appropriately spaced, after the GP! You know how long it'll take ME to get to the point to jump?? Being safe and sound like I like...A very long time!
So since I have never jumped in my current facilities arena and never was told I could not,
till last night, for varying and seemingly backpedaling reasons, as I confronted the negative...

I feel very singled out! And to tell you the truth, I lost it...cried for the seeming-singled out feeling, and they were upset, I was upset, made some consessions..I actually can't remember now!
And..I just remembered, I was lunging a perfectly(how that happened ?) relaxed and even tempo'd- white froth coming outa her mouth- mare ...and I see them coming into the arena towards me....AND, I can't remember what they said, again now...
and My mare just lost it after that...bolting, fearful, and I couldn't even ride or ask her to canter on the lunge. She READS ME TOO WELL for trying too much when down.

So folks...I may be absent for a time..this is really- REALLY -depressing me right now.

I may have a plan though..not sleeping last night helped with coming up with a plan.
AND it does include jumping..Lots and Lots of jumping~

I leave you with my first ever jumping experience on Washashe. We had done it a few times before she taped..so I let her go after the third time. Until a later time...be well~ 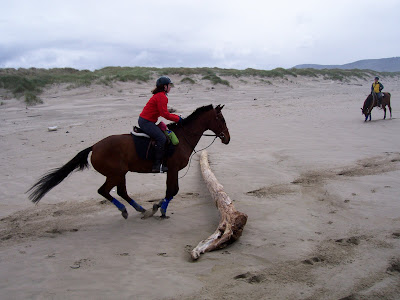 Posted by allhorsestuff at Tuesday, November 04, 2008

Email ThisBlogThis!Share to TwitterShare to FacebookShare to Pinterest
Labels: SOUR and DISMAYED