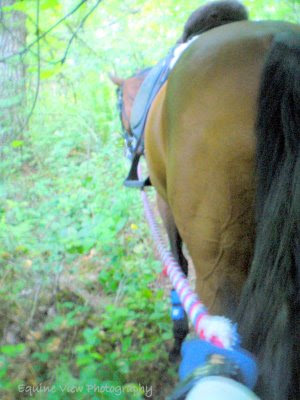 This picture depicts a first for us...are ya wonderin' what the dickens is going on there??!!

It was a nice day to be alone with the mare last Sunday. The day before we had gone up to Stony Mountain, and it was a very LONG ride, with a fairly new horse friend to Wa. She was in rare form.
She took a negative exception to this young horse. She kept reminding him - she was the "TRAIL BOSS HOSS"! Ooou, some very flat, pinned ears was not all either, she took a couple lunges at him as we passed or if we tried to "parade walk" side by side...it just was not going to be done that day. She was having NOTHING to do with him! That story will come after this one. 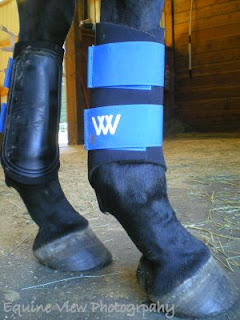 I found these nice leg wraps in the perfect color at our local Wilco store> The brand name letters are Washashe's nick name- Wonder Wa!

So, even though I thought to walk her mostly and take it easy on her. I wrapped her up incase it got hairy on the trail. We had a lot of hills the day before and It was warm out. I did not want to put her hoof boots on again after getting off several times(day before)to untwist the right hind boot. And finally, to just take the blame thing OFF!
I told her that we'd just go for a walk to see what was down a certain trail, not too far away.
Seeming to understand we tacked up and we were off! No hesitation whatsoever. Good girl.
We have to get off twice for gates..I did try to open the gate from atop of WA, but can not get to the bungee. It is down too far on the fence . The owner of the property has it really tight and angled to keep the 3 cows in. I guess they have tested it and if it is looser that what he does(and I cant' from astride WA) the cows get loose!
So no prob...she is awesome standing for me..I always use a log or mound or boulder...to ease the wither torquing..I am a bit over weight right now.
We made it to our destination and I dismounted. She ain't NO mountain pony ....I have proven this a couple of painful times now. I like to share the adventure with her dismounted ,more and more these days too. It is good for my weight reduction efforts!
Down we went, one corner-narrow trail. 2 corners, even steeper. She was following wonderfully and keeping off me. I turned the third corner, and though I could hear the sounds throughout the Upper" Clear Creek Canyon"of bubbling water, I saw how very narrow the next stint was and how there would be no turning around. I did decide to take my chance now to turn around. She was great, stepping one step at a time and stopping precisely as I asked her to.
We got turned around but I realised..it would be near impossible for me to walk ahead of her with out getting stepped on. So...I thought..humm, I have her halter bridle on and have her lead attached in a chain knot(as Gentle John's Owner suggested) I undid the knot and shimmied behind her...twisted her long black tail around my hand and asked her to "walk up".. she did..no second thoughts. about 12 feet up..I tested her and said, "Easy... AND...Whoa". She stopped and looked slightly back at me. We continued the whole way after that, with out stopping again.
I love this mare..unrehearsed trail ...mastering it together in a new way!
Coming home we took a side trail that we had never before and we almost got lost...but I remembered that the light behind the tree ridge was on the right of me as we went into the canyon and so it should be to the left coming out..no problem really...it is a part of the trial system I ride, that is between 2 roads and three private properties..can't do much getting lost but can do alot of doubling backs and circles...my red ribbons helped me to return.
On the last leg of trails across the street from the tree farm, we were crossing the creek near one of the road. I have always relaxed in the fact that passing car engines don't affect Wa, unless they rev loudly, suddenly, and then she get a bit nervous. She tends to want to cross faster on the way home, then going out...I was asking her to lower her head and to walk, when a car was passing(normally, no problem) But this car either THREW OUT/HIT/ Or? a paint can- as they zipped on the road..it made a terrible crashing scrapping noise and Whhooooa...she bolted forward and up the trail at canter-as she had no idea what terrible thing was about! 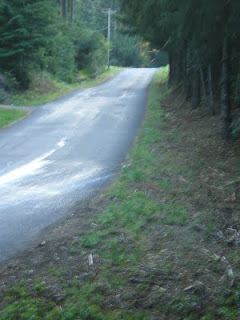 By this terribly blurry picture, it is hard to see the paint can, plus large strip of wet, spilled paint on the road. Wa did NOT want to stand by there either. We never tarry near roads..ususally cross them after listening. So she was wanting to get on with it! 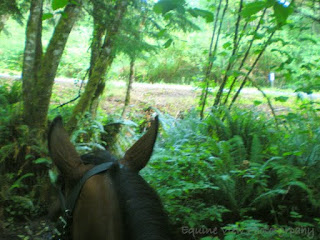 VIEW FROM TRAIL IN THE CREEK

It took some convincing..but we went back over the creek a few times and to investigate and prove that it was safe again.
Then-finally-we returned to traveling homeward, at dusk now.
What a day..I was soo elated by the teamwork we had and also, that she'd go somewhere clearly scary for her, because I asked, and she trusted me.
Getting home at 9pm..there was just enough light to clean tack and give her a brace wash and feed as we listened to the Coyote's howl! We missed the deer parade of earlier in the eve.
Posted by allhorsestuff at Wednesday, July 22, 2009

Email ThisBlogThis!Share to TwitterShare to FacebookShare to Pinterest
Labels: love this mare