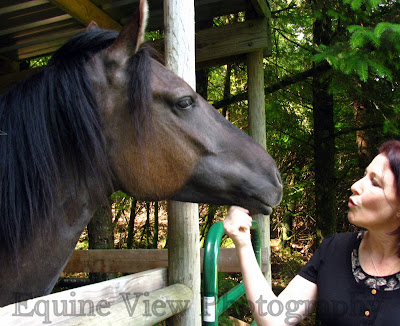 I went back to the beach last wkend with my riding buddies from a former boarding stable, T.A.T.
It stands for "Two's A Team".
The Weather was lovely again...so nice!
The horses had arrived the day before and all had been ridden on the beach- some for the first time...like Tessorro here. He is a Gorgeous 5 yr old Kiger Mustang. His momma, above, drove herself and I Friday afternoon to join the horsin' party that had gotten started the day before.
We decided to take a Sunset ride...but only on the Bay side, as Tessorro's mom needed to build connect/confidence, before she tackled the beach.
Hoof boots...uggg~ 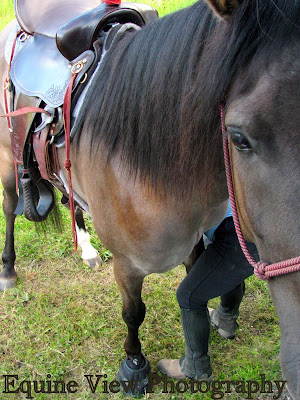 And as we set off.....into the beautiful bay view...I mentioned that a helmet had been forgotten! 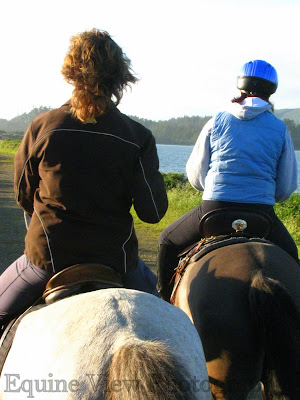 You can't make someone do what you know is right...prepare for something- No One wants to think, could happen to them.
This gal had a brand new saddle made by "Tucker Saddle Co." it was gorgeous...and sat her -so nicely balanced- in its cushy padded seat! I had saddle envy going on! 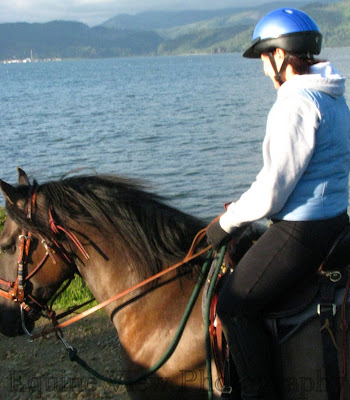 We strode down the road...me on a borrowed horse named Diesel. He is a large Paint I have ridden, just indoors for lessons. He had an attitude this night..which surprised me some, testing me and testing me on my resolve for standing and also leading.
I mostly remained, in the back. 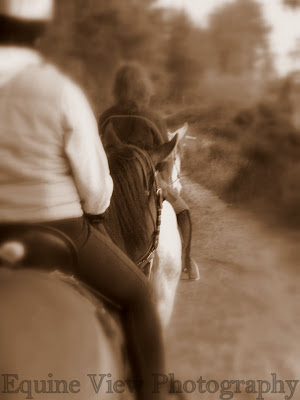 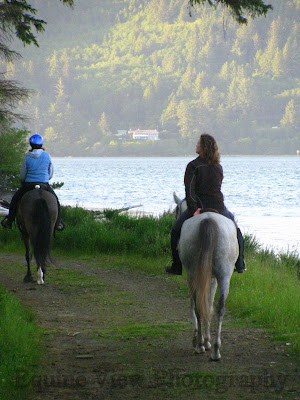 It was relaxing and calm with the bay on the right...then we turned around, a short time after, and headed home... bay on the left. 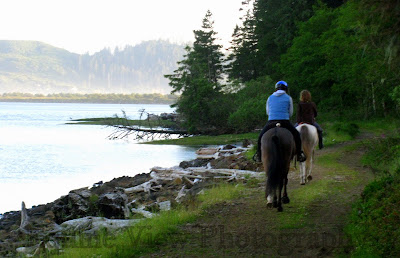 This was the last shot...
before the ride went shockingly awry!
And as much as we have stewed over it now..and recounted it..it happened very fast! 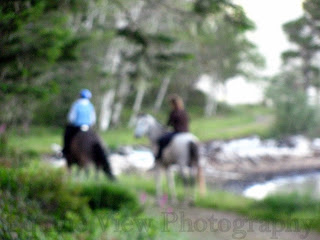 We were all walking calmly and I had begun some leg yields on Diesel...to get more control of his body...he was great, as we traversed the road...back and forth with straight thrown in for good measure.
I was simply doing that then...he mistook my aim and LEAP FORWARD- over a rather large water puddle...into nothing but brush..not even a place to land!
But, I was left behind his motion, so he landed in the scrub without me abroad.
I had been jettisoned at the onset of the big leap! I had no stirrups to help me out...was on the bareback saddle.
I laughed as he leap..almost in disbelief...and the girls looked back to see me....in mid air...he in mid air...then me crumple backwards...over my  right shoulder.
THAT IS WHEN IT WENT SOUTH...
My mount was calm for a moment..then, I may have stumbled as I got to my feet, or he saw the saddle sideways( I did try to stay on apparently..squeezing, and the saddle went my direction.)
He lost it and bolted towards his Young, Grey pasture mate...and then the second rider was flipped off, as her Grey mount twirled around and ran away....which leads me to the third horse....Who must have thought, " OH MY..THE LIONS ARE ABOUT!",
he leapt into the scrub brush too...but.... OH!!!
A DROP into the Bog awaited them!
Must have been 6 feet down...as they were no longer seen by us!
I heard , "Help, Help, Help" ! We rushed, as well as we could to try and find them...and what happened next was amazing.
Tessorro the Mustang, poor baby, his head appeared- AT OUR FEET.....that is far down the drop was!
We got out of the way as he extended his two legs onto the ground we stood upon...and hurled, pulled and contorted himself, back up to the solid ground of the road.
That accomplished...we set out down the road to find the loose horses.
My friend, had fallen on her helmet-less head and I saw blood and a cut...she was doing okay..knew her zip code and husbands name.
For now...I jogged on ahead...and got to a turning point..and then heard...cathump,cathump, cathump....here came Diesel horse...looking scared and then relieved...he ran right to me!
The young Grey Arabian, "Chief", stood patiently by... just down the road...waiting for us to come to him.
We all convened..and walked the mile back to the trailer.
Once back to the house, and after taking account of the horses...we then set out for the hospital, after I inspected my friends head again..open wound, but clean..it was still bleeding.
3 staples is all she got off with- PRAISE GOD!
Boy did I pray and pray, as we were going for the horses earlier.
It could have been SO much worse!!
So, the rest of the weekend consisted of sleeping and healing/resting. Families came to see the two women and encourage them.
I, of course, took more photo's having more time!
We assessed the horses again, in the morning... Tessorro had a bulge in his chest..no swelling or heat though. He also did not change his gait at all. 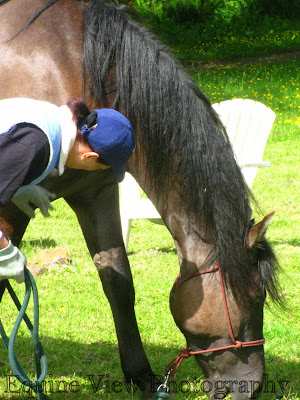 We  noticed Chief telling us things about his body...it bothers me here.... 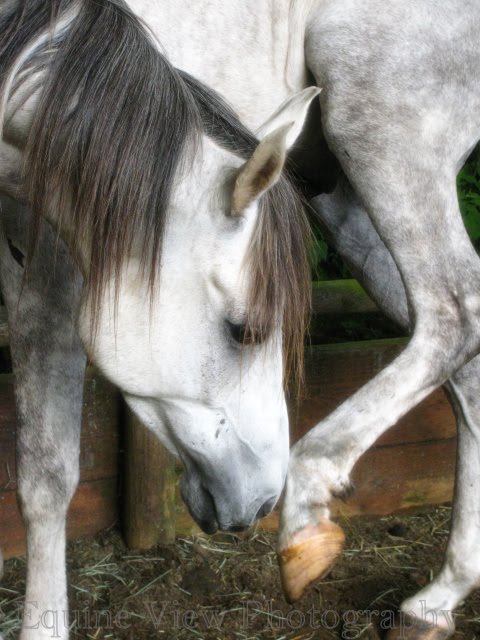 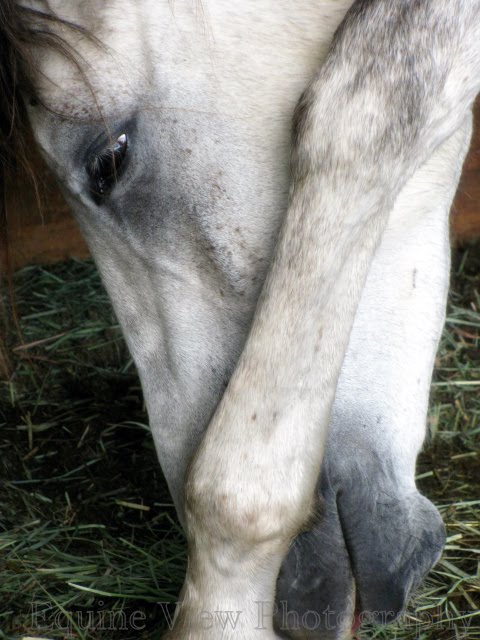 He had gotten the rope around his pasterns and burned some skin right off, while running.
Nothing a little 'Sore No More" did not help..in fact I used it too...on me!
The rest of the time...I just shot the horses and ate too much food.
They looked so beautiful...being of diverse coloring! 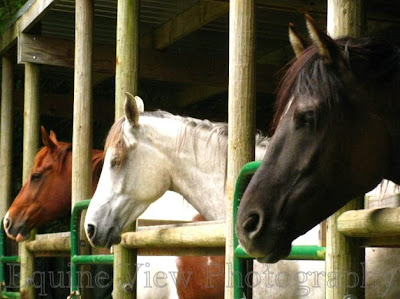 And Tessoro's ears..they were all fluffy and Carmel colored, as I looked down. 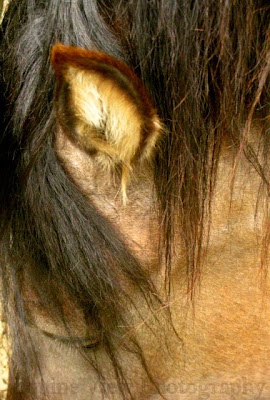 Then, he looked down on me! Made me laugh too! 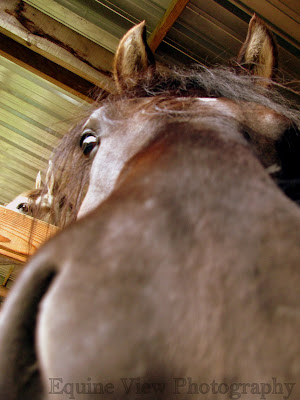 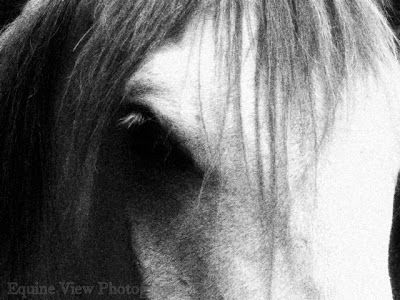 And Diesel...saying, enough with the photos...feed me and get on with it! 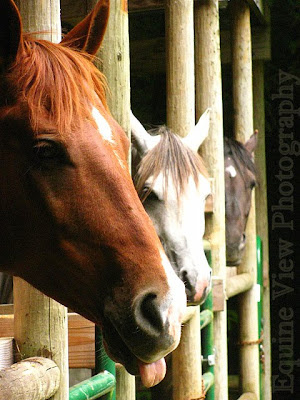 We did get on with it by concurring....we would be a bit more prepared by doing what we could next time...
A helmet was on the short list!
And for me...saddle with stirrups, on a borrowed horse!
Posted by allhorsestuff at Monday, June 21, 2010