Yup..I have become one of those members so, the day before (last Sunday) I celebrated a little with my mare by accomplishing something I have wanted to do for awhile...a  6 mile loop trotting day. I made her walk some (had to ask) she and I really had fun . She was in rare form .  Willing, forward, but not rushing and I found a nice groove, in the rhythm of her trotting. Right  diagonal is easier, always has been, and left really took some flexibility to remain that way...it could be that she threw a shoe last week...but I rather think it would be that way anyway.

I lengthened my stirrups a notch, and off we flew, trotting corners, up hills and down hills. It is really awsome for balance -hers and mine.
Sometimes a simple two point worked better than posting. We had so much fun...started out with nice braids..all balled and short, exposing her beautiful neck...um, we trotted most of them loose!
HA! 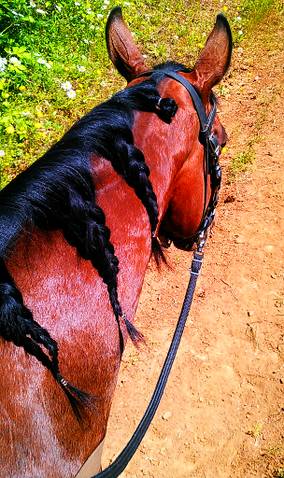