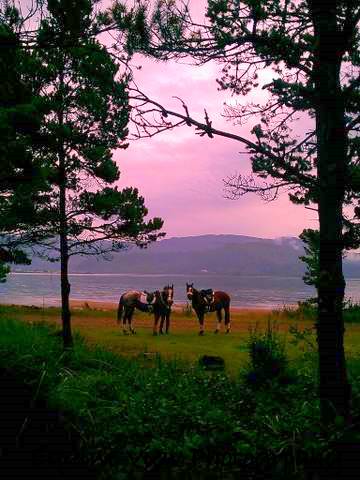 There are  no wasted moments, for a photographer at heart.... even a jaunt into the scrubby bushes-to hide from any onlookers - to  do you know what.
I looked up and saw this pink sky view, as the horses wondered why I had suddenly gone out of sight. I love my mare...she actually kept stepping towards the woods I was in, to get a better look at where I could be.
I'm impressed with the camera's capacity to take lovely images on my "smarty" phone..I call it that cause of the words it makes up as I try to quickly TXT someone...if you don't proof read..sometimes you say things -you don't mean to!
After a heck-of-a morning trying to be relaxed and "on vacation",  yet leave in a timely fashion for the Bay Ocean House in Tillamook, Oregon, I was confronted with this (avert your eyes if you are sensitive to eyes with massive blood showing in a burst vessel..yea, I woke up to looking  like this! I was not too concerned...I have seen them before on friends and they randomly happen. Sometimes because of lifting too much weight...I had only packed the trailer a day before for this trip and nothing out of the ordinary was carted and heaved around. 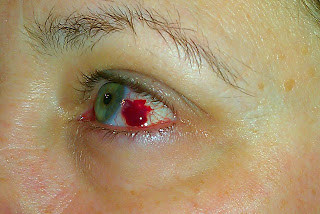 Well my husband was way more concerned than I and since I knew my sis was not in town yet from her own part of the Oregon coast, I thought okay, go see the eye Dr. I found out 2 things. It is not anything to be alarmed over and that I have 20/20 vision! WOW, thought it was worsening but..guess not! The Dr. was so funny too..he said, "I could get my husband in trouble or- I could take it easy, allowing everyone else to do work around me because I couldn't". I just said," I will do all my own work and leave for vacation, if there is nothing seriously wrong, thankyou!"
Leave we did after my sissy helped vet near 17 horses that she also helped to rescue last week. My other sister works as an animal control Deputy in Lincoln Co. Oregon. They rescued the 17 horses from a terribly rancid personality in Seal Rock that neglected them for over 2 years time by never letting 4 of them out of a stall, never cleaning the stalls and leaving blankets ON 6 horses -year round -for 2 years!!! That is not all, but that is mostly the worst. These horse are all highly bred and papered. They are on a beautiful web site called Raingate farms. The woman once was prominent in showing breeding and selling the horses...she  somehow went awry.
We got to the B.O.H. beach house after dark..and I was upset a little that the first beautiful day for riding, had passed us by. We had 2 free days and nights..one was now gone. BUT...I came around to see the worthwhile efforts of my sister volunteering for such a worthy cause
Early morning view from the kitchen window of a  horsey wind chime..and mountains behind~ 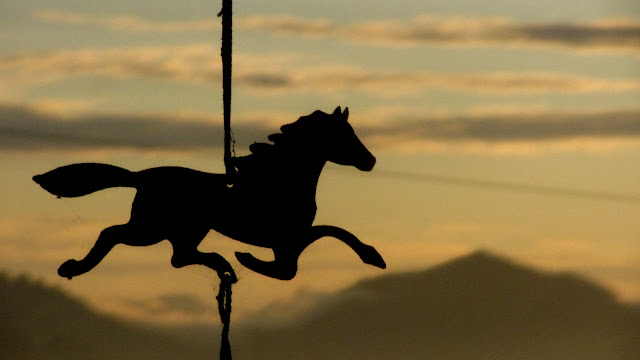 Sunrises are so warm and wonderful looking~ fishermen are on there way out to the bar of the ocean, during high tide~ 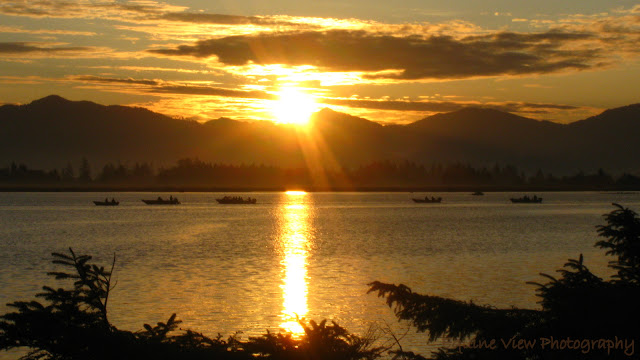 Horses fed and stalls picked...all is right in the world 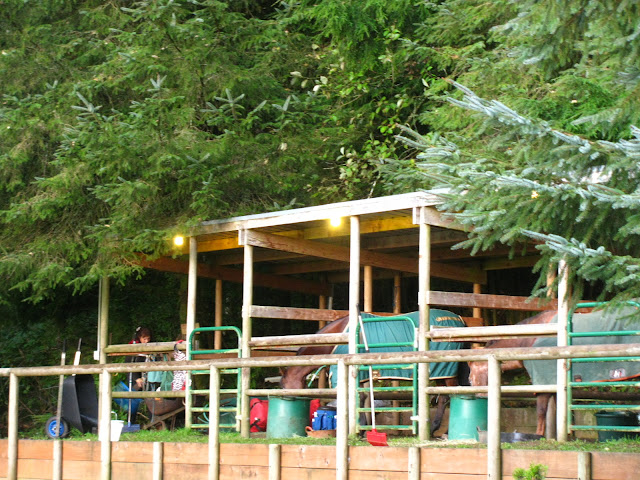 Time for another cup of coffee!
The day was beginning nicely and becoming brighter as the morning sun rose higher~ 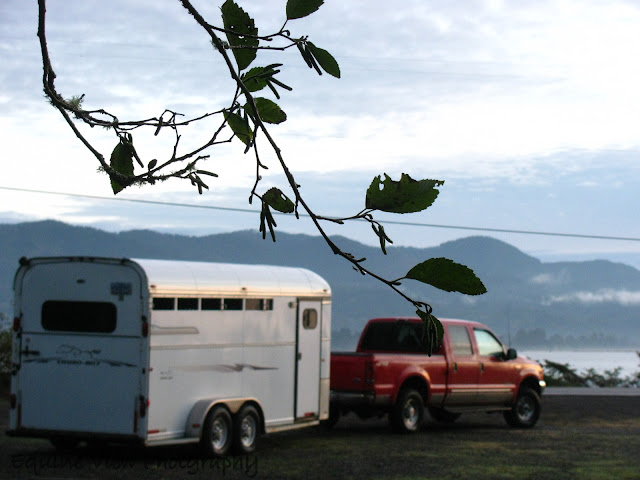 We sisters made another fire and contemplated the days events...A bay side ride for starters, we decided. Heading out an hour before low tide would make for the best ride..should we decide to go for the ocean shore side.
The Herons were everywhere...some 10 birds could be counted, as we drove the 3 miles to the Bay Ocean Spit parking lot. 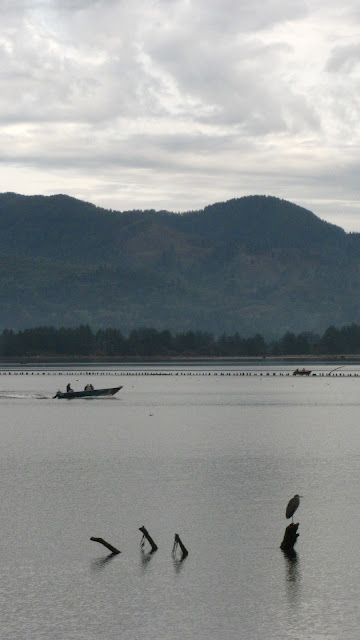 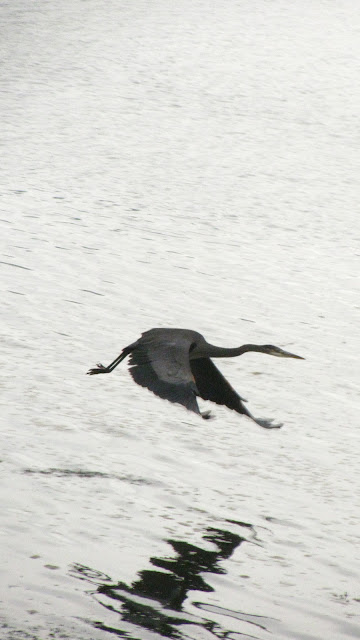 We followed Pantz mare along the bay side road...she was really "Kickin' Walkin'" fast like!! 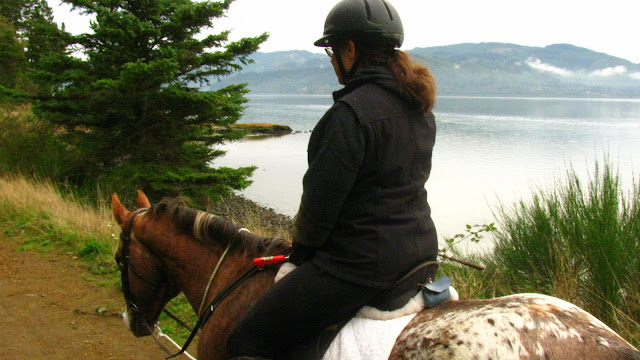 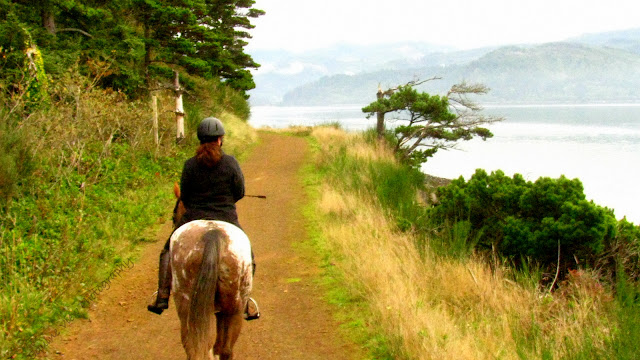 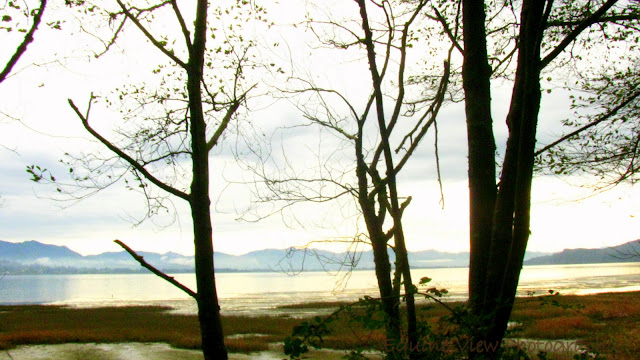 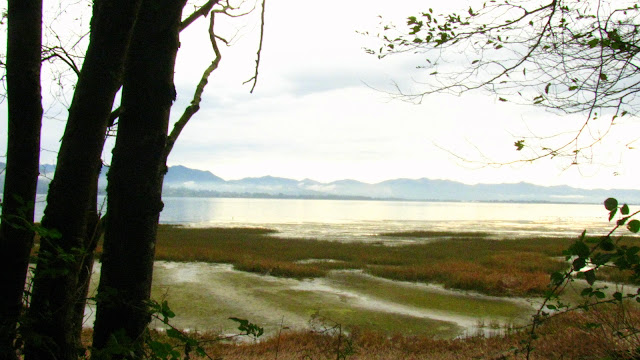 It was perfectly wonderful weather, being near 60 and no wind this day as we rode along the Bay of Tillamook. The mares were good and pretty calm this day. 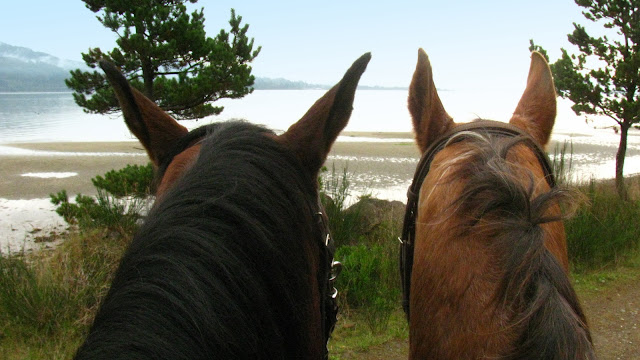 We found a little sandy 200 foot beach and tried to ride on it...but it was pretty sinky- deep- sand. Made for nice photos though! 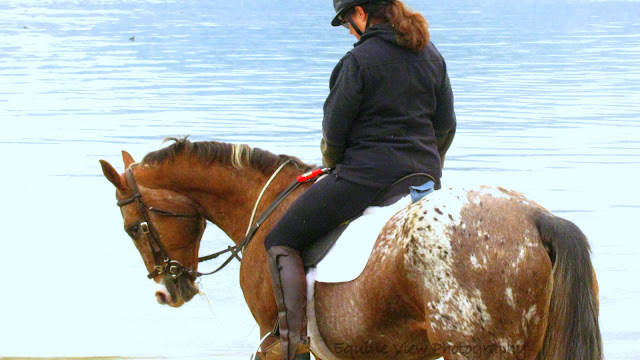 We got to the end ofg the road and my sissy acted like she did not remeber me saying I did not want to ride the beach this day with hoof boots on...fearing I'd loose them. She insisted we go forth...my mare was fit and ready for the turning homeward...pretty uppity. I knew I'd be in for a battle of wills and having my trainer sister there...I was not up for her and my mare so I simply asked her to pony me back...which, in itself is hazardous.
My mare is so competitive..to be near another horse, no matter it was Pantz, is a whole- nother- level of uppity! While taking a lesson a week back, I  learned a technique from my sis. It gets my mares attention and she can have an almost instant release from me asking for her head lowered and longer..IF she yields as I ask when she become inverted and high headed...
I choose a side, when walking with others on the side of me. I choose the opposite side. In this case, the right. For three strides, I close RT my hand/ and apply RT my calf by lowering my heal, and ask for an eyeball. I release for 3 and re ask if she has not gone longer.
If she has lowered her head,and has become attentive to my aides- I then lower my heals/squeezing the same hand as, about every other every third stride...just to communicate-Yes- keep it there.
WOW, it was a wild ride...but since we had done this technique before..she settled into it after only a few rounds of asking.  I LOVED how she settled into my hands..and then I could let the reins out, keeping my hands closed and a contact-though longer. As we walked along, it was my leg that kept her neck long.
Smart mare, she is!
It was about 4 pm as we got back to the trailer...Pantz had the slightest amount of foam in her mouth..it made my sissy so happy...this mare NEVER relaxes enough to  have a loose jaw and foam! 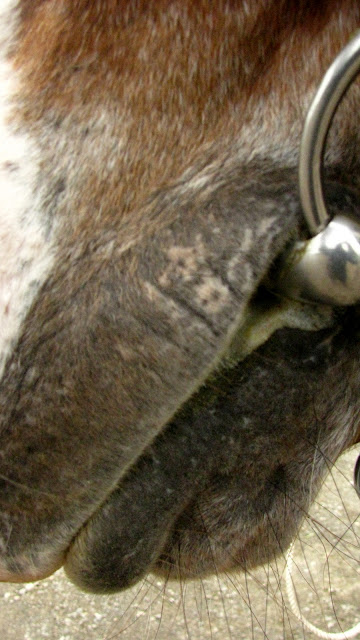 Hand grazing and another round of Strong Java we had upon arrival...we had ridden/ WALKED 10 MILES this day! 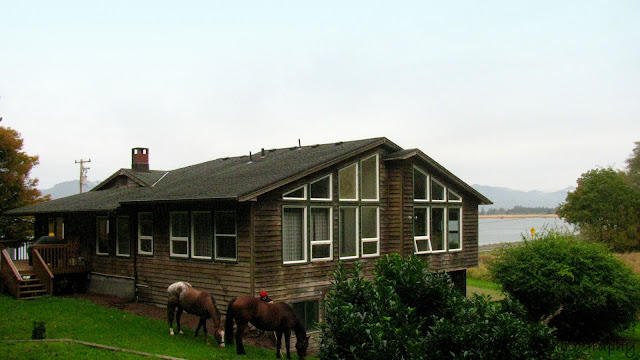 Sunsetting on the Tillamook bay second day on the coast with my sissy...made for more pink clouds 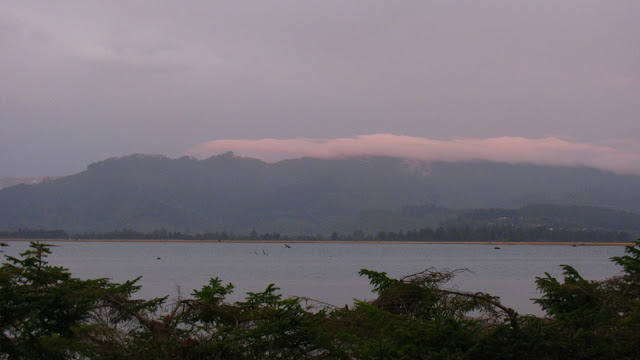 Night 2 of our times away..it was so cool, just us sisters...looking after the horses and me cooking for her....more to come..."~'

Posted by allhorsestuff at Monday, October 24, 2011