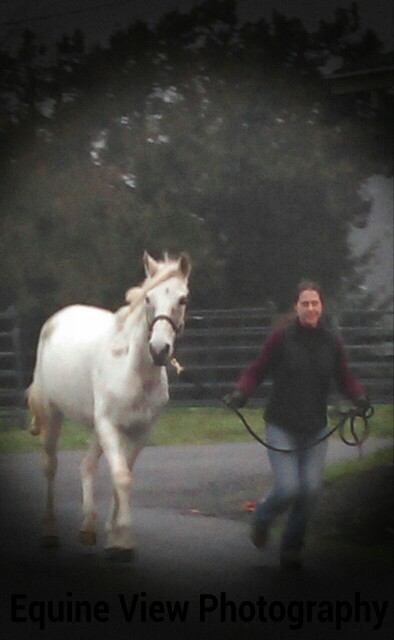 D'apple being trotted by vet assistant
"D'apple" the rescue mare went into the vet yesterday for her post purchase assessment.  It almost got cancelled due to the weather...snow and some ice. But, the vet's office told us that, " all had gotten there fine and no one reported problems".
As I left my mare's stable's driveway in the snow, I questioned that.  Yet, driving down into the valley, it did clear and D'ap was in the cross ties, being readied by my sister, as I pulled up to the barn. She had come to the gate for my sister singing the little D"apple song,
" D'apple loves apples!"

This mare is such a polar opposite to our mares! Washashe -reactive and strong willed and Pantz - Lead mare that takes care of everything, whether you want her to or not! This mare is a sweetie, that looks to you for direction and trusts...maybe she's an introvert ....but so far, she's never blown up.

My sister walked her out to the open trailer. All the paddock turnout horses were standing as close as they could to the fence lines...making it seem either that D'ap was going somewhere special, and they envied her. OR..."Oh no, where are they taking you? "  D'ap snorted a little , but got directly onto the trailer! I love this mare!

We gave the paperwork to our vet and he studied the dental work section, with interest.Since he is 1 of 3 certified dental experts in Oregon, he does make it a purpose to educate us and clarify any needs a horse may have. He knew the Examining vet that D'ap had last July, before my sister adopted her. He had done quite alot of work on her mouth...and I could tell he was being diplomatic about what he thought about it too. So we got her into the poll stall to check it out for ourselves. He pointed out several factors that made it difficult for D'ap to eat and also, accept a bit. 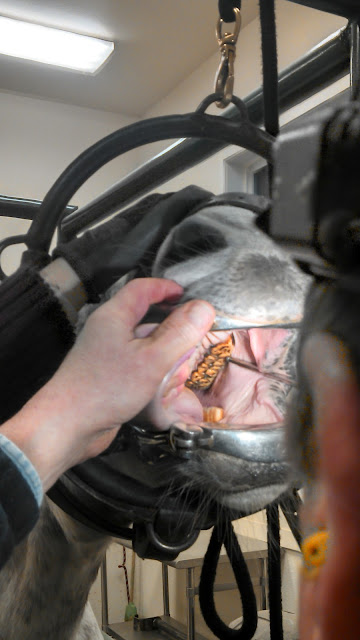 Our vet did a nice job with correcting her angles and making sure a bit would not pinch her gums against her teeth. D'ap did well with him working in her mouth. And soon it was all done. 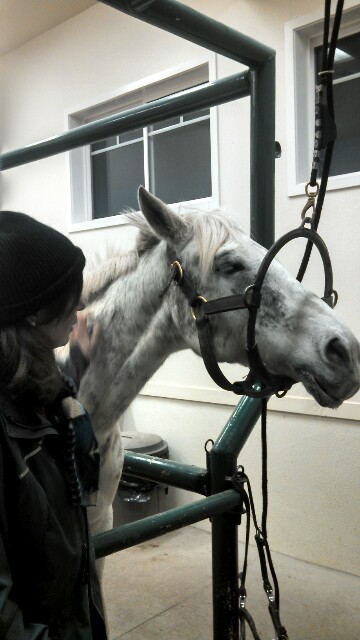 Sleepy D'ap
When a county rescues animals they rely upon volunteer work sometimes, or vets that will take a small  $ portion for the work. You just don't know who you are going to get and what capacity they have for the animals needs. This was the case for D'ap's reduced price vetting...she got a half job and it was showing up now for my sister, as she tried to work with her.
Now, we know she will be balanced and painfree...we also found out something else- D'apple got younger! Yup...she now is only 13 years old! 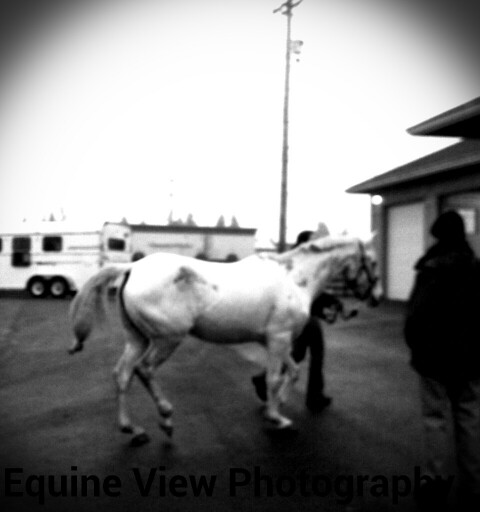 D'apple being trotted for Vet

A very good day it was. Since D'ap had work done recently, our vet did not charge my sister for the float. That was very nice!
The other questions my sissy had were about her hip scar and same leg bone protrusion. She had gotten injured in her previous life and had a big divot from her hip area and her splint bone looked odd. Though, she is not lame.
That is what we decided to go with, instead of X rays. Wait for the problem to show itself and leave the marks to being blemishes for now.
***************
She again, got right into the trailer...though it was a larger step this time and she tripped-but recovered herself.
I hope she continues to come to her song, "D'apple loves apples". I will find out today how it went the first time after her vet trip.
*****************
THIS WEEKEND>>> D'ap and sister are enrolled in a dressage lesson. I am so excited to see my sister ride with someone. Being a trainer herself, my sister studied and listened to this other trainer gal(Cathi) give lessons, while  she did her stable work over the past several months at the barn. Don't know if I ever mentioned; my sister gets a $ relief for the 2 horses being "on call" and doing her own horses stalls everyday= plus =the entire stable on Sundays.

I also hope to start riding again on my mare soon. I have been weaning her off the DEX drug for 2 weeks now. I talked to my vet yesterday, as we were there in the office. He says" light  saddle/walk work" in the arena, for a week or two, then regular turnout can begin again!

It is coming together finally..now if the weather will stop freezing! 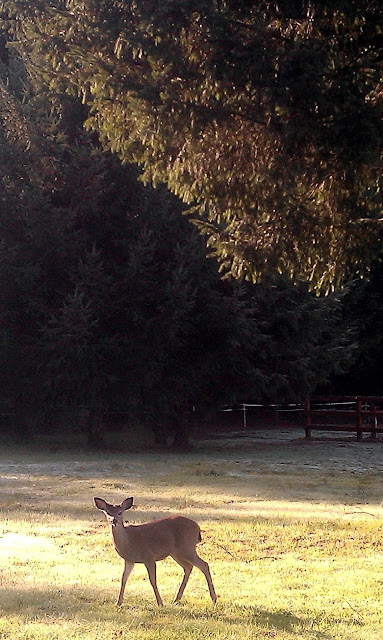 Posted by allhorsestuff at Tuesday, January 15, 2013