A Spot of Snow 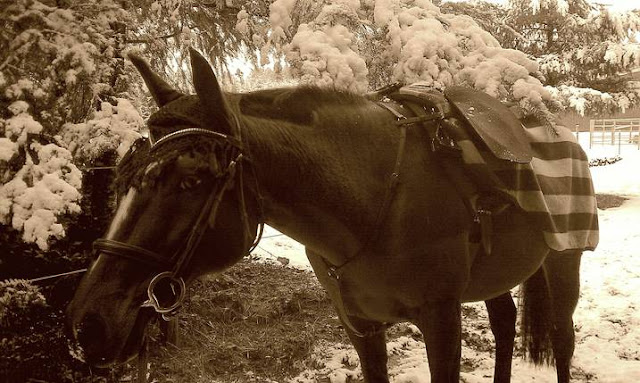 Totally delightful it was, to recently get out to the stable to see the trees and trails blanketed with puffy, white SNOW!
Of course it was delightful for me, because I did not have to drive in town in the stuff, or even far in it while in the country. It was mostly centralised around the stable-  perfect!
The mare has been very uppity of late...because of new things. She is a sensitive soul and reacts to any new changes. This time, a new horse (and human) Boarder had come 2 days earlier.  She is by far-not nearly as weirded out about the cute "Sam" gelding, as she was about the RED HORSE OF DOOM- last fall. But she and Theo, her turnout buddy, were definitely looking like they didn't sleep much, the night before!
Sam is a 15 yr old Missouri Fox Ttrotter/ Arabian mix. Interesting. He has a fine head and bigger boned legs. He looks to be about 15.1
He enjoyed some grass and the deep cover of his turnout, as he kept an eye on me~ 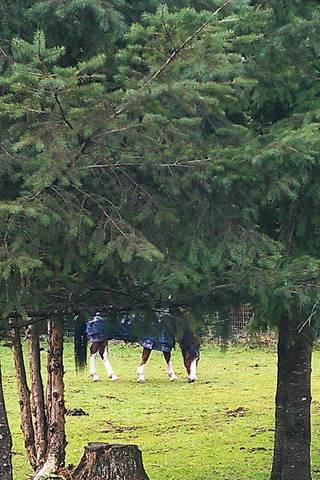 So, this snowy day the mare had a rare attitude of "LET'S GET OUT AND GO"! 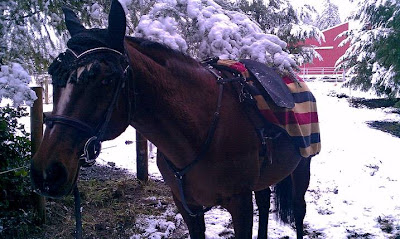 I have only experienced  her like this when something at the stable is bothering her..she wants to leave it..and maybe not return. She is so easily read. It is truly strange when she chooses every route that takes us farther and farther away, and not the usual- quickest way homeward. 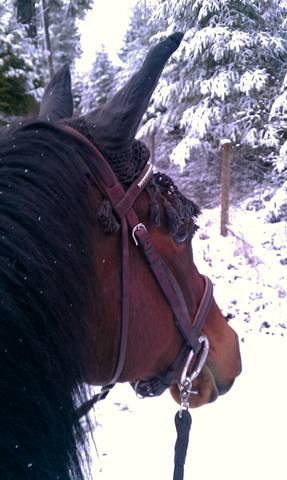 I bundled her up and me too..and off we went for a dusk ride at 4 pm. Since the bright white stuff was present, it made it seem not as late as it was, and kept us visually able to ride longer.
A cute little squirrel ran across our trail. he had a hold of a large cone to eat for a cold winter's night's dinner. See him, off the left ear? 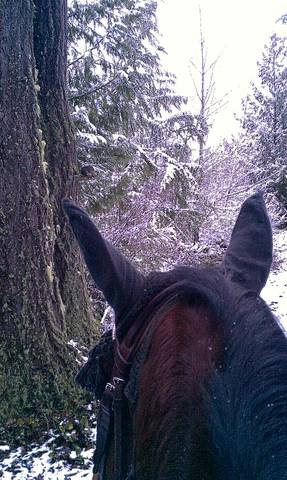 I have been riding with a  polo wrap on my mare's  hindquarter. It's called the "Promise-wrap". It has seemed to help her with balance. It is a "TTouch " method to encourage hind end engagement. 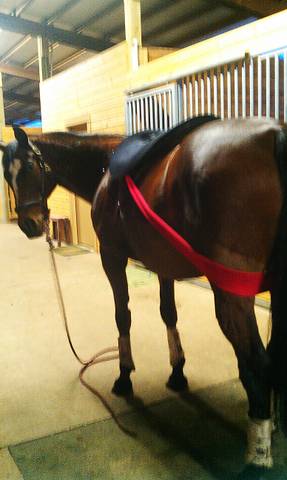 It can be used with horses that spook, giving them a feeling of containment; and  also reassures horses that spin or bolt.
I had none of those things...just a very free flowing walk, as we took our tour of  local nature, in it's wintry veiled self.
Love this shot about dusk time, the mare walking and bobbing in an engaged walk.  Somehow, I got her black covered ears in focus -and all the rest of the world, was a wintry white blur! 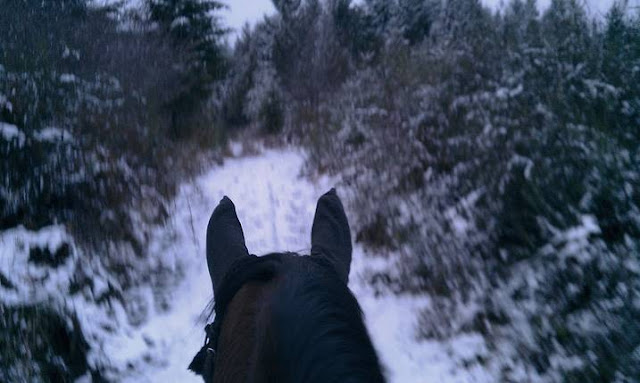 Just a quickie ride for us girls this day..."out and back" is what I call this kind of ride. Only about 2 miles...of total blisful stuff!
Home again we came and all was looking so different and new...even the paddock seemed intriguing to Wa. She stared hard, down the treed run... snow ( even though there was not much under the trees) always has a way of making the world look NEW and BRIGHT. 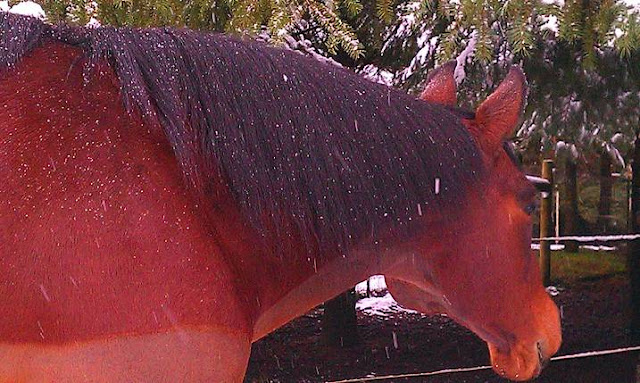 Thanks Wa mare...hope to sneak another OUT and BACK tomorrow sometime....and....
....Tomorrow...we pick up our 2 rescue kitties from the local shelter. The shelter owner had all the volunteers say goodbye to Grandpa Norm T. kitty. Today,  I got him a special cat bed that is so ultra padded and soft..even my husband approved. He just actually thanked me for thinking of Norman, and making sure he was able to have it cushy!
Posted by allhorsestuff at Tuesday, January 17, 2012