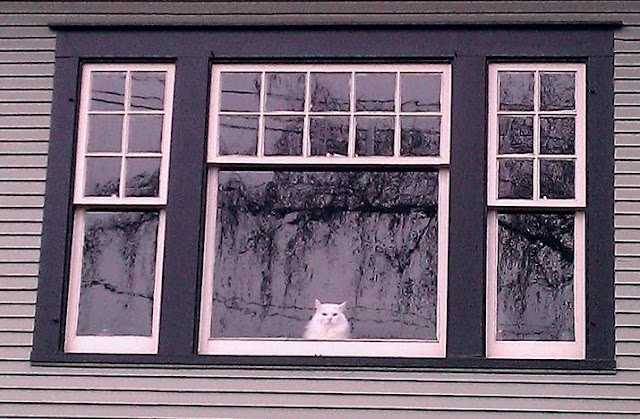 This regal cat was overseeing our departure the other day, as we headed out to meet some  furry felines,  potentially to adopt as our own. We have never seen his white majesty before; peering out from his hillside manor, "Purrfectly" centered in the picture window! We actually turned the car around and made a second pass by to smile,laugh and take his photo.
We did not have a succesful go of adopting that day. The Oregon Humane Society is having specials on adoptions- 2 for 1 and now, only $12
. Recently, we viewed a rather HUGE kity named "Walter". 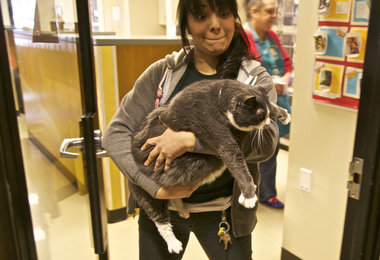 This was his second time through the O.H.S. He had been adopted several years ago, ere now. The older person simply allowed him to free feed...OH MY! Weighing in at 28 pounds...he could NOT walk on the slick floors.
SEE VIDEO HERE
Since he had been in the Local OREGIONIAN News paper, and on  the local news also- as one of the largest cats the Humane Society had ever had on premise, he brought in MANY people that wanted to adopt him. Lines of folks were waiting outside the next day, after the news spot. We had called to put him on hold...but he was just too popular. I'm glad he got adopted and the new owners are being councelled on how to care for him and give him a safer way to diet to health! We had some experience with this , so that's one of the reasons why he attracted us.
Meanwhile...all the folks that came into the Human Socienty that day also had a love craving for a feline friend. Out of the 4 kitties we had viewed that morning to see - ALL were Adopted that day, just  before we arrived. The remaing cats are all very OLD or very Sick . There was a recent -95- cat horder rescue- and most of them landed at O.H.S. They are just too needy for us and so, we keep on looking.
Other Cat Adoption facilities are very exspensive...$85 a cat. Since we want 2, that is out of our budget for now.
We got a tip on a neat Salem rescue from another blogger friend...and went online to see the cats and kittens there. A great place it was  and nice looking, better adjusted animals. So- we may drive the hour or so to look.
But yesterday, we went local again, to a place called "PAWS" animal shelter in Willamette. It keeps difficult hours for us to arrange for both of us to go at once. Once there ,we were thrilled with the health of the animals, though -way too many- for a small space.
I was drawn to several and my man was being drawn to another OLDER kitty. There is one at O.H.S. called "Patches" he yearned to take too. For some reason his heart wants to give an older kitty it's final home..this one, at" PAWS"-" Norm Thompson", looked like it could go to meet Freyda, Elsie and my Mike Madison cat, sooner than most.
The heart wants what the heart wants. They have a service there that helps you pay for the Elder kitty's needs- all the way through . I am not sure I want heart ache so soon, as it's still raw now, but that said,
I'm inquiring today about him  for my man....AND......
I think,
I found my girl.. 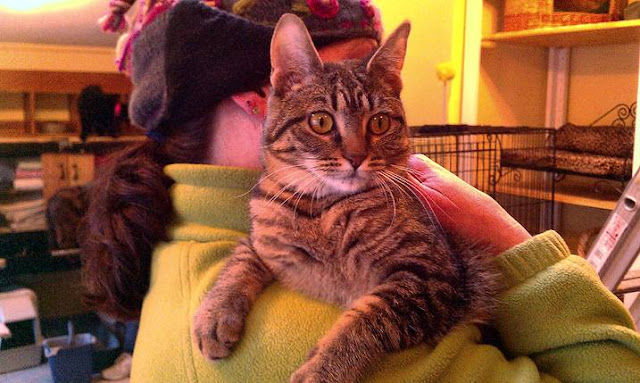 We played for like 15 minutes and I petted her, over and over again in the hour and 1/2 we spend there, looking at all 40 or so cats. She only has a number on the band around her collar -2604B. I was trying to come up with a name..they are all named after Hollywood stars or famous people. I thought of Gloria Estefan, with her unusual beauty and lovely talents. Her nick name would be "Glory B" ...though..don't ask me, it just rolls off my toungue!
OH GOODIE...it's finally noon..I can go see the cats again, and talk about the future of two of them!!
Posted by allhorsestuff at Monday, January 16, 2012