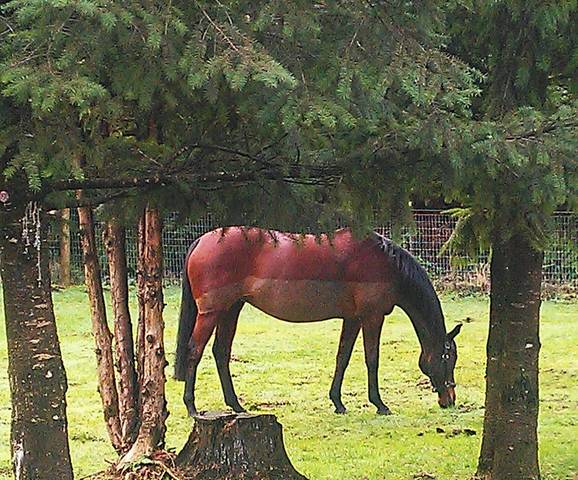 Every step my mare took upon entering the stables, left a trail of bloody hoof prints. About  6 or 7 of them. The stable hired help left them for me to see. Once my man took the photos, he started to get blood off the concrete ! I went to looking at the injuries and he set himself to covering the blood with fresh shavings, from my mare's stall. I figured that since the blood flowed so strongly, that it probably carried any debris OUT with it too.
I brushed the hoof off, and pushed and prodded a little, looking for anything wedged up in the wound. Wa did  not tolerate much, as she weaved and yawned in pain. She also had an unusual edema on her right chest. Imagine 2 penny rolls, end to end under the skin and hanging. I looked for a kick or abrasion. There was just a  round score mark. I could only imagine that she ran into something.
And the Hoof wound(s), I found a severely cracked heal bulb wound a few days later, as I soaked her in Hot Epsom Salts. (NOW I KNOW- it was an abscess that blew becasue of the insult of the injury)
Farriers view 1 week later. 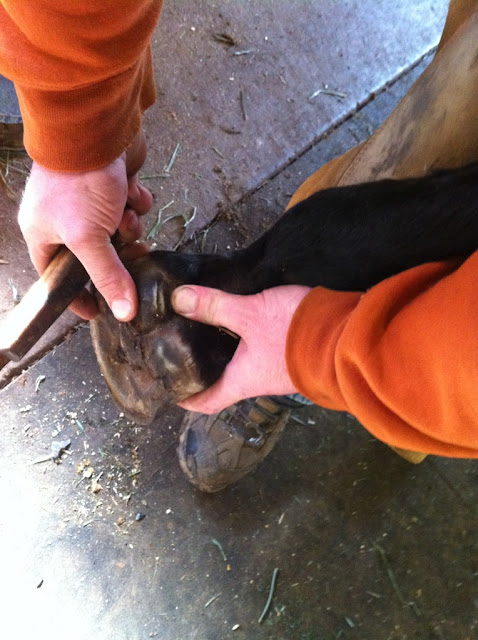 Last fall the my PBO's got loads and loads of gravel, to make sure the pasture turnout entry area did not mushify into muddy mess. They are very conscientious about the horses and turnout conditions.
As per normal, base rock was laid firstly, then the smaller gravel. Unfortunately, and this is not anyone's fault, the bigger stones always work themselves up to the surface. It happens everywhere I have ever been. With thousands of pounds of horses traveling and dispersing weight, and putting pressure on the grounds..it always happens over time. So some sharper stones have begun to jut up and are on the sidelines as well. Last Summer, when the stone was laid, my mare was shod in front and they did not bother her summer hardened hinds.
This winter, as per normal in Oregon, it has been totally soggy- doggy -wet. Over the months of horses standing in wetter grounds, the hooves get softer. So couple soft hooves and soles with speed.....my mare needs not an excuse to go fast, she loves to move! So almost 3 weeks ago at dusk, something scared the horses and they ran and ran , so the hired help told me.
Now put all that together- mud/rain , softened hooves and- Wala...injury.
This slice doesn't look that bad in photo's, but it is deep and with the bottom part of the frog skimmed off as well. She only would walk on her toe for 4 or 5 days.
With the slightest pressure I put on it with my hoof pick, it will part like the tides for Moses. 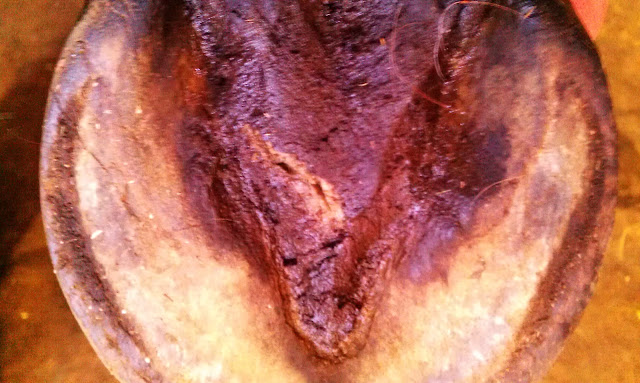 Soaking, soaking we have done...and my mare has been a model patient...she has never taken her hoof from the Hot Epsom Soak. She loves her "Bath" as much as I do in Epsoms, when I get home from my rides!
I think the -Full dropper squirt-( for "~" C's question) of "Rescue Remedy" ( animal version)and TTouching I've done, really gave her a calmness. GRACE was given to me  too, as right before the accident, I decided to Cut her Rice Bran -OUT- of her feed altogether, along with minimizing the second cutting Orchard grass hay, and using the first cutting more.  She was getting crusty necked and had some fat pockets. I also had started her on a  Magnesium supplement. This has GREATLY improved her disposition and her NERVES have really calmed...even to her aversion to being brushed!!!
The routine SOAK in Hot Epsom Salts. After either a Nolvassan surgical scrub or Soapy 7% Iodine- IF the hoof is soiled. 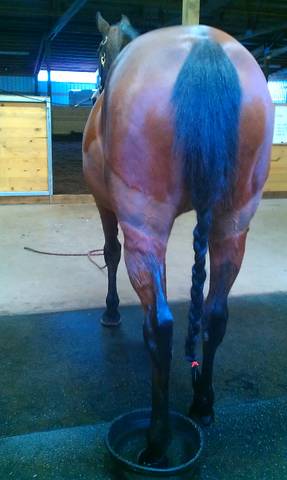 I have to say...I adore my mare...she has been so happy to see me each time I arrive. I have had to go out every day for the Soaks, sometimes twice a day,  to make sure she moves and gets her circulation going.
Sometimes, she'll nicker to me, as I walk into the stall...I MELT!
I was advised, by my barefoot specialist, to not allow debris to enter the wound. So, I have used this cool boot I found through "ACTION RIDER TACK". It's the classic Duct tape design, with out having to cut the duct tape out every day. -Plus+ it breathes better, not being STUCK directly on the hoof wall and sole. I poulticed the wound as well with " CALM COAT" Wonder Wrap for the first 2 days. 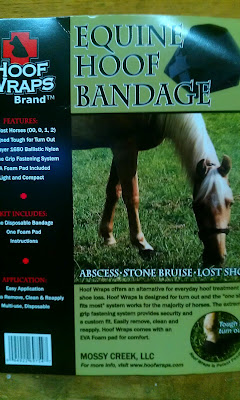 The SOFT ARENA was a  friend and we would  go in there to run around...not running at first, as she favored the hoof. She sometimes played her "touch the object" games. 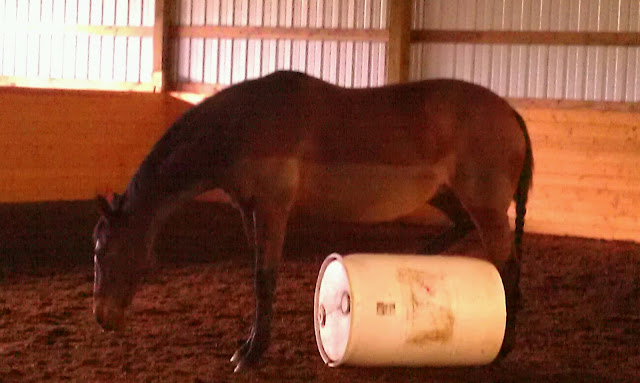 Then, after the first week of stall/run boundless, we played other games in the soft footed arena. We trotted together on foot, making nice seamless turns, in a rhythm together and going the other direction with hand arm actions only. She finally side stepped and backed for me, by the wave of an arm...and she has it down now...I raise my hands, and she will rear on command, coming down and looking cute, waiting for the cue to get  her treat!
Our down time has been rather enjoyable..and a phase of horse ownership I that can't be avoided, as they always do seem to get hurt sometimes. But with the TTouches and these other  creative diversions...I feel like we've actually moved forward with our partnership.
The other thing we've done is what I call :  "MARE WALKING". I have done this from the first time we discovered trails and woods together, 5 years ago. I walk with her and we either" rehab" like this time, or we scale treacherous territories or we just go for an outing on foot,  for the fun of it...looking for green grasses and sunshine to take in while we spend time together.
--------------------------------------------------
THE SUN SHONE THE ENTIRE FIRST WEEK INTO THE SECOND week  of February ..how's that for making you feel like things will get better!!!
SO, we prepared for our MARE WALK....I booted the mare up, with a "frog relief system" on her injured hoof and made it water proof...just in case...but, the dry weather made a huge differance, and the footing was not muddy! I also tacked her up-though I would be not riding her, I would sit upon her, as she grazed.
It was so nice, Sunny, warm and beautiful!
We strode down the road together...she heard some riders coming back to the stable here. 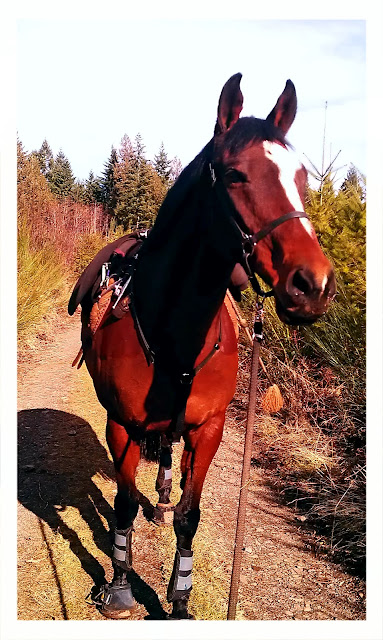 Once at the Sunny, grassed strewn location...I mounted up from a nearby log and she ate happily with me relaxed aboard her.
We were very near the "farmers field" that has a very nice-soft sawdust track around the parimeter...I decided to stay on her and walk the soft footed track. THAT was great!! She and I truly enjoyed the sunny time out. 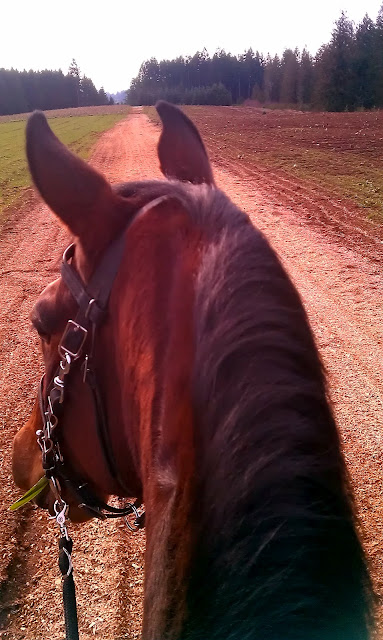 What a blessing to have the sunny and dry weather for a week or so!

After my routines with my mare, I'd fly off to my sisters mare.My sis was now recovering from her knee surgery and not to be tempted to do more(while on DRUGS) as she had at first, feeling no pain and coming down from the stronger anesthesia stuffs. That story may come later...woo...she does not remember a thing and almost does not trust me when I say the things that occurred,as she came off the surgery drugs!

Often, it would be dark when I arrived to see Pantz mare. She minded not, as she longed to get herself moving in the arena- rolling, running and playing!! 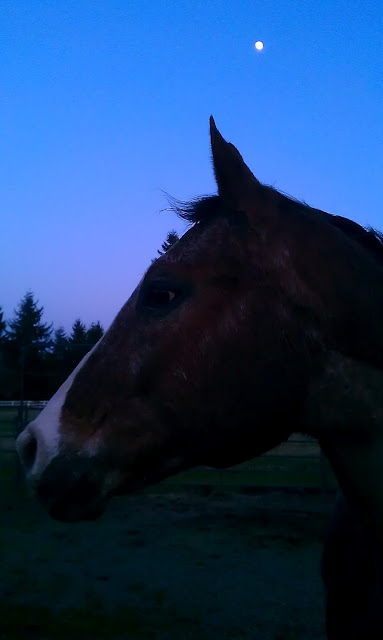 Sometimes...we'd see each other in the day times for a graze session. Her pasture is closed off to spare it for a couple months, during our rainy season. 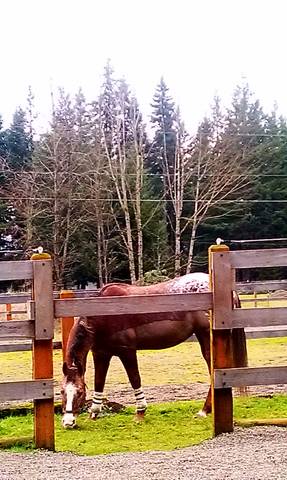 Then all over again the next day...my mare and soaking....walking....
AND,once in a great while, grazing the small paddock nearest the stable...as long as she remains calm and does not rip around!! I keep a "trail boot" on her hoof as the frog is so soft and forming still.
I'd hate to Wreck all this rehab by allowing her to rip it open again, stepping on something hard! 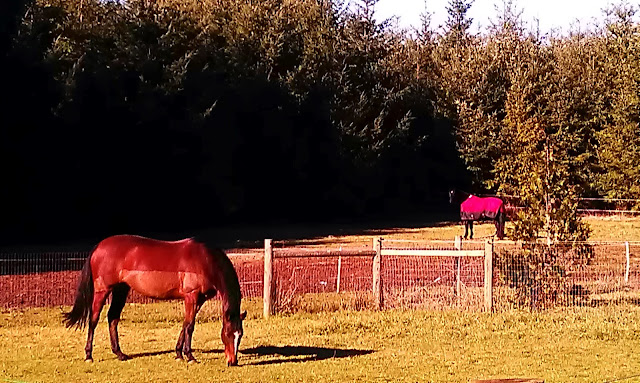 So, that's how it  goes for us the last 3 weeks. It was great while the sunshine lasted...now we've returned to a spot of hail, snow and colder temps again.
The  mud still has not dried up enough , not will it for sometime to allow the mare in her full run...she stands and pines for the other half. 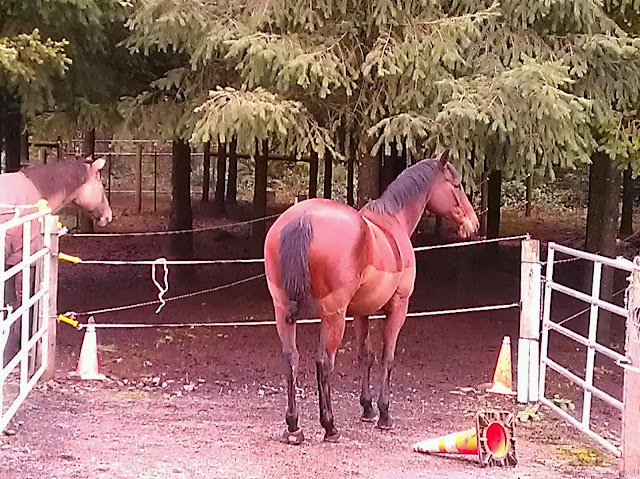 Onward and forward we go. It is what it is and like I mentioned, I have enjoyed our  different times together. I have learned a thing or two about hoof and  abscess recovery.
One of these days, when normalcy returns...I will maybe sit down and read and visit with you all...like CATCH UP!!   Miss you guys!
It's all good.... I know there is a season for all. So while I must be a stables more often and not ride-
we are working on our show...I'm calling it
"KaWallia"!
Posted by allhorsestuff at Wednesday, February 15, 2012