Testing out the "Panorama" mode on my cell phone's camera...it sometimes makes body parts disappear or sometimes adds more of them!~

While winter has a grip on most the country still, it took a one day reprieve from the PNW, allowing us a happy sunshine outing!

There was another rare appearance too,  3 out of 4  boarders in the stable- with horses. It was fun to catch up on news . I had forgotten my girth and went to the tack room for it. I glanced back at the mare and saw this shot. 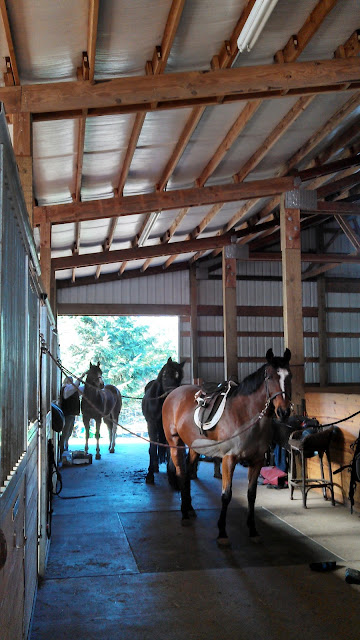 All riders dispersed soon after, so I am glad I captured the rare sight.
Off we went, down the trail solo today. We do love our adventures we two girls!
Soon after I stopped for this shot of the sun rays through the mossy trees and the mare giving me "her look", we had a lovely trot down the lane ahead.
OH! I am so loving riding in a saddle again. Having stirrups to do "two point" trotting, has given me such a high! 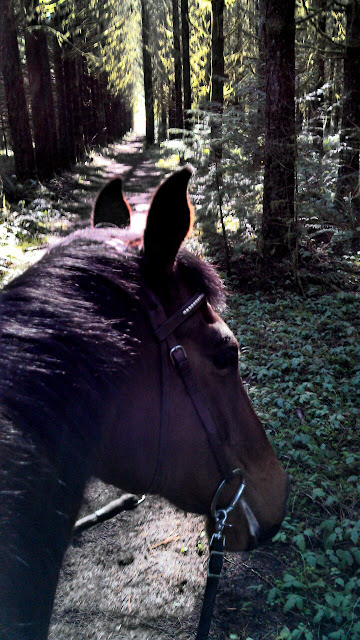 Once we reached the corner we slowed to a nice brisk walk. The mare snorting delight and then, I caught a glimpse of him....
See the man towering above our heads, above Wa's right ear ?? He stands on the banks of "Shawna Pond" fishing and quite unaware of us, approaching behind him. 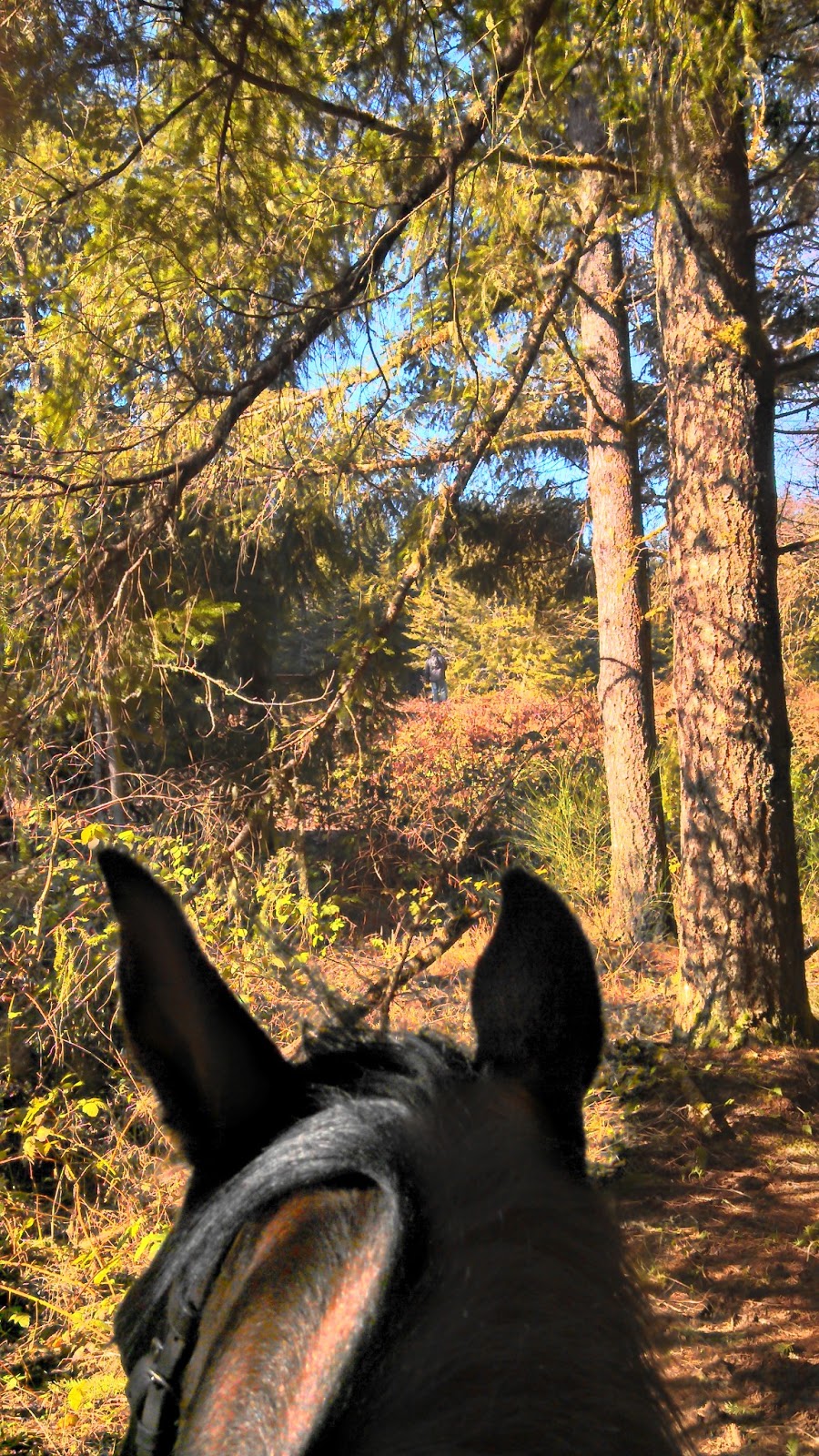 It is the dang strangest thing to come upon someone standing that far above one's head!  The first time it sorta made the mare stop, and really ponder it. Now, we are used to it unless the one standing there is casting, as he fly fishes. The "whipping noise" of casting does get to her, sometimes.
I normally say, "Hullo" or "Hey there!" as we approach (sneak up behind them) .  My secret giggling ensues after the initial greeting too...tee hehe... as they are never really sure if they heard it at all; they seem to feel as though they are alone in the woods.

And that leads me to a story: ONCE , while approaching a man fishing in this manner I shockingly realized, he was doing his thing, off the side of the pond- facing us!  Yea, no hollering hello that day!  We turned and found another route out of the woods! As we passed him from another direction, minutes after, - YOU BET- he may have pondered his actions!  You are never truly alone in the woods; I have found out myself, several times!

Such a lovely day it was and the ride we had truly blissful.
We returned to the stables to find all had left, and we had the place to ourselves. I cold hosed Wa's legs, applied "Sore-No-More" spray to them, and also her back.  She asked to be turned out in the arena as we passed the gate, for another roll. I picked her feet, groomed the arena dust off from her rolling, and  she willingly returned to her stall and run for a big drink of water. She began to finish some left over hay.
I always say, "seeya later" to her, before I leave. She stops whatever she is doing, even eating, to look for me and the treat that ensues! I love it.
******************************************
THEN- I jetted over to my sissy's barn for another lesson with D'apple mare.
Sister tried to invite her to the gate. As you see, standing in the sunshine and dry grassy area, was far more comfortable for the mare! 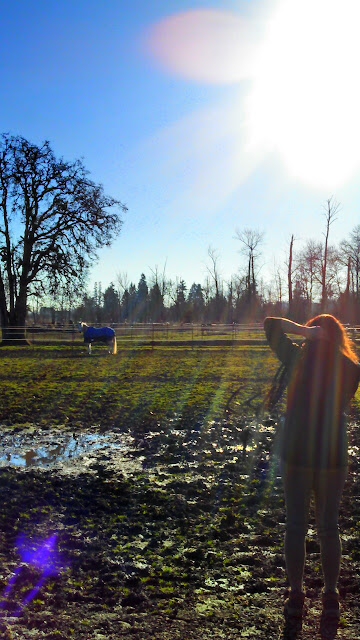 Sister lunged her lightly, as I tried out the Panorama mode again on my phone's camera.
Two white horses, one woman!

While the lesson was not as "AHA" as the one last Sunday, it had it's moments of connection for the mare and me. I MUST stop trying to micromanage myself and riding! The times I saw myself in my "MINDS EYE",  those were the times I saw it correctly and did it correctly and honestly.  D'apple responded to those moments (wish they lasted into minutes) and sister also responded with "Nice" or "feel that?!"  I did feel that !
I am starting to compile memory for the feeling of correct. D'ap and myself had not a problem this time with direction. She was a bit fussier with her head, but sis did say, we were more controlling this time and less passive. We ended on an excellent note though. Breathing in deeply (rising of energies) to trot for 3 strides and  then, breathing out (relaxing and lowering the energy) to come back down to walk. AWESOME!   Doing this several times, we were together and very much in communication.
That really felt nice, such a cool connection. I do this with my mare without thinking really, but to do it in the school, with D'ap, well, I was elated and we ended on those *wonderful* breathing* connecting* moments.

These Short and concise doses of school, have far more impact for the both of us.

Hope all is well with everyone....taking the Sunny day as a hopeful sign.


Posted by allhorsestuff at Saturday, February 16, 2013