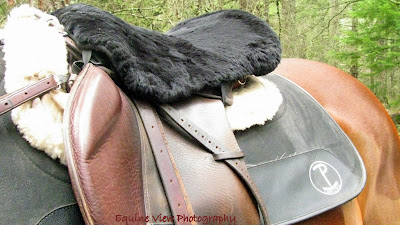 I set out on my local ride to try out something my siss had left for me. A "Lami Cell" saddle pad. Since her Western saddle prooved to not fit her mare and I have always had problems with a slipping saddle on our many hilly trails. She went ahead and left it for me. It looks like a brand-for a logo, and I'd like it to come down 2 inches longer, to protect the entire saddle flap ..but.... IT DID NOT SLIP this day, as we searched for my sisters lost, blue polo wrap.

Sorry to not take a pic of the unique and soft antimicrobial material that has contact with the horses back. It is waffle like. I also am going to check into GREY HORSE MATTERS girth that promotes ease in movement for the horse and, as she mentioned, non slipping features as well.

I also was trying out a NEW BLACK FLEECE seat cover...It was YUMMY feeling, as I rode!

AND...yup..Wa mare got to try out her new Shadow Roll fleece nose band. 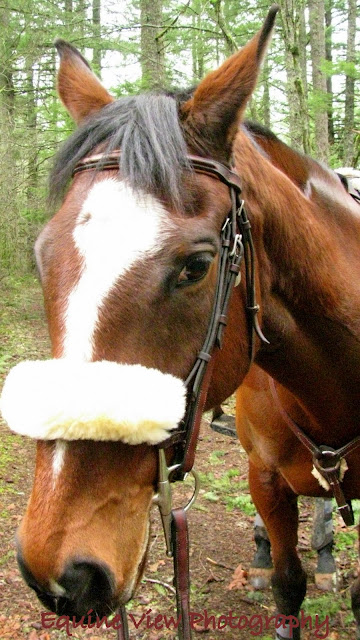 We rode to the old barn next door looking.... 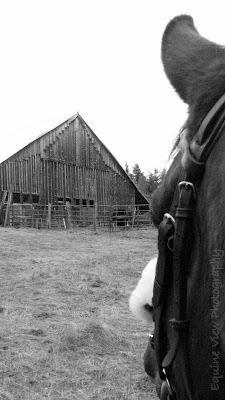 Then down to the pond looking.....And There she was...a  water sogged, blue polo wrap! 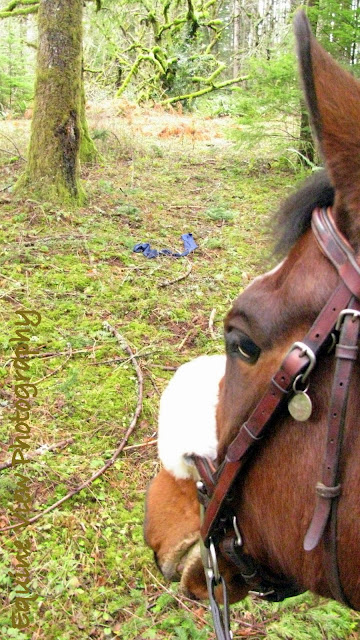 The Velcro had just given up! And with our riding weather being soggy and filled with creek crossings...not a good choice for the legs! I suggested some nice WoffWear all terrain wraps, like I have for Wonder Wa..the LOGO WW fits us fine!

We then took a longer ride away from our property line..Wa can't focus on me well, thinking she may turn towards home at any second! So we crossed the creek and went up a field  and down a driveway to another large tree farm. She was very good and when we hit this mossy area..I was taken with how pretty it was under her Mahogany bay color..of course, had to take a pic! 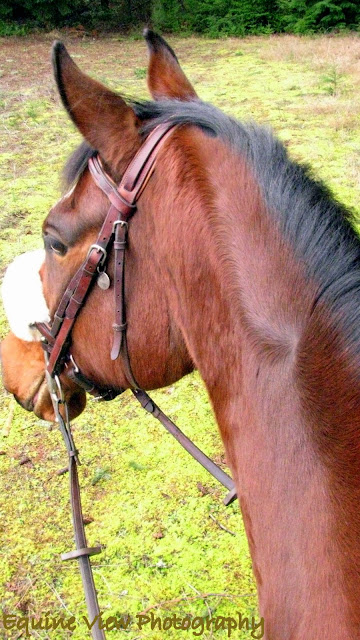 All went well; though Wa mare has area's she gets uppity about. Areas near the woods and by a house, where a dogs runs out and jumps in the air, behind the little trees to see us. She mostly was calm this day. Then...all of a sudden, she got high headed and wanted to bolt sideways. I turned her and retried the same path, on the edge of the wood homeward...she stopped dead and I kept telling her..all is good while I sang a little calming tune.

Then- POP- out of the woods was a Man! And he had a Machete! It was weird  folks...my mare heard him while I was trying to console her..she was telling me he was there, whacking the bushes beyond view!

Posted by allhorsestuff at Tuesday, January 26, 2010