Sprwinter -words from the home front

Hi y'all!
Thanks for the encouragement here and  personal emails to me, about how we are doing. Love you guys for the kind and thoughtful friendship! 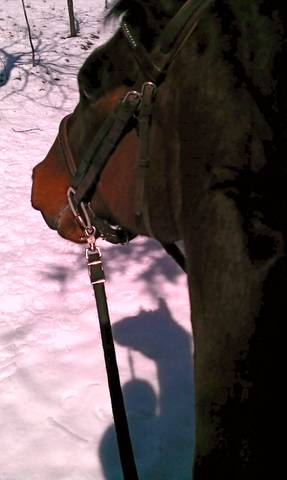 Yea, that made up " Sprwinter " word is for how it has felt around these parts... And the above photo is how March went for us.
March 1st looked like that, from horseback...
Then on March 13th again, looked like this.... 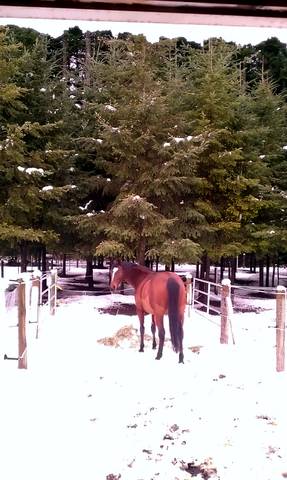 While waiting for Springtime to come to our section of the world, we were patient here in Oregon, only groaning a bit and biding our time with some indoor activities. The mare was being her perfect patient self, as her frog healed. She and I went out when we could. I wrapped her hinds up in boots to protect the wounded one, as she was not lame at all from the frog injury. When we couldn't go out , due to foreboding weather, we  kept busy in the wonderful inside arena we have.
We got Wa's tarp fears conquered too! She always is mindful of anything under her feet, and the tarp we never could cross, though she'll wear it like a hoodie, over her back and head. Under her hooves, she never would do. My sister thought..lets remedy that- one Sprwinter day in March.
A little oats and she was walking over it, after me, without a halter! 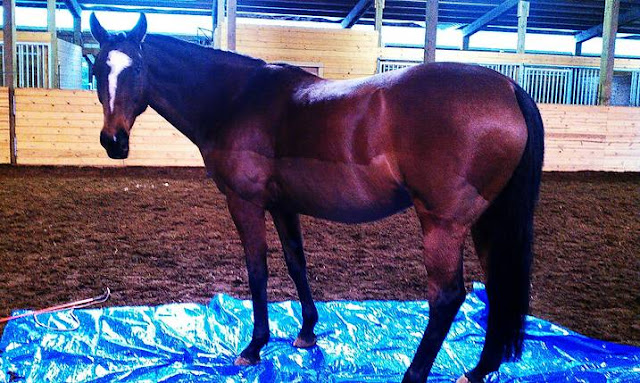 We also lunged quite a bit, with the  T Touch Balance wrap . 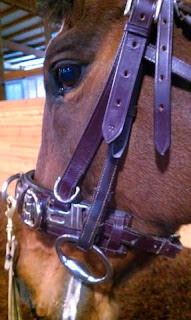 I've a shocker to tell ya....we adopted ANOTHER rescue kitty. It has taken 3 cats to replace Freyda!, my sister said! Someone saw a box moving  along side the Hwy and stopped to find a cat suffering inside. It's fur almost all gone  from heat exhaustion and stress. The poor kitty re cooperated at a vets, and then went to stay at P.A.W.S. shelter near our home. We met this cute and loving kitty, as we met all the cats at the shelter last January, when we were looking to adopt.
I actually had her on hold at first, with the 2 cats we did adopt, while making up our minds. 3 cats just seemed  like way to many!
After we took our 2 kitties home, they moved Martina to a local Pet Store that teams up with them . It just so happens that the store is where we get all our cat care essentials. So, we got to see her over and over...and it proved too much a temptation for us not to invite her home as well.
Meet Martina Mcbride~
We call her Mari 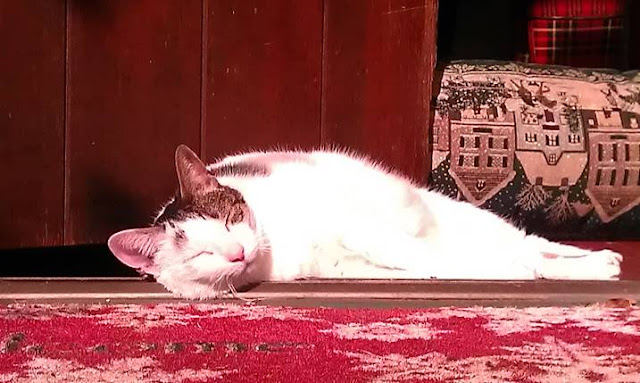 She's older than Glory, my tabby girl, and she is more a lap cat for my man~ 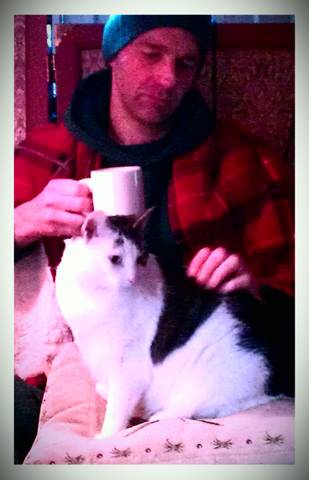 It truly was timely for Martina to join us too, as the 11 mo old Glory kitten was beginning to terrorize Norm Thompson. Him being 18 and fragile...did not appreciate that!
Glory has a HUGE-O play drive...I can barely give her enough run time.
Glory and Martina started out being separated for 3 days...we put Mari in the front bedroom. She was all set up and we'd lunch with her or have supper with her, read the bible in the morning with her on our laps...it was nice. Glory would stick her paws under the door and howl for us to let her in, but NO, not yet. Mari would hiss under the door a bit. By the second day, i was opening the door up an inch so they could spy on each other...more hissing from Mari and shock from Glory.
Norm, he had no clue really...he sleeps alot, but did smell round once or twice.
Day three, I let Glory into the room with Mari. The hissing had stopped and they seemed inquisitive...well Mari left her room ASAP upon the door opening, and Glory rushed in to check out the room she had been locked out of! I took advantage of this situation and shut the door, leaving Glory in the smaller room allowing Martina to go into the whole house unabated by the stripped fury!
Doesn't she look  demure here...Glory fury (nicknamed "FLURRY") that rarely stops moving!! 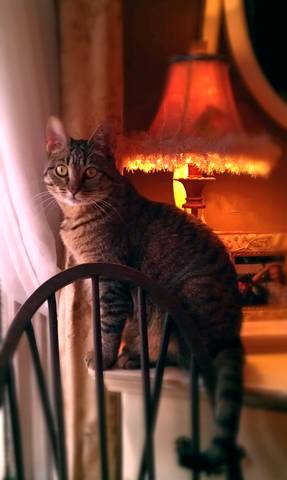 All three are well and we are loving the group. They play hard and love our attentions. They are such a stress relief for us...the heart rates go down, with a hand on a bunny soft cat at night!
The Hoof healing  for my mare had gone very well... After the Epsom soaking for nearly 3 weeks, I then set to spraying the hoof and frog with a 7% Iodine twice a day, to harden the frog and sole.
At week 6, March 10th, there appeared a bubble like section of new frog from the gash...it was so soft, I could score it with my fingernail. 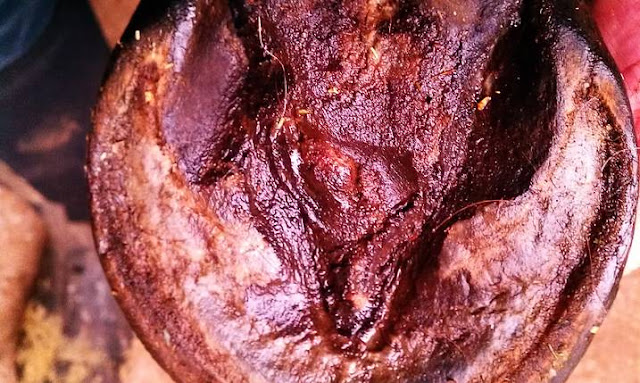 I know I have done the correct vetting, as I checked in with my barefoot specialist at week 3 and again at week 6.
At week 8, a Vet looked at the hoof and said,  "keep doing what I was doing, a while longer with keeping the hoof wrapped." I had to make sure gravel and debris could not penetrate the almost sealed slit of a wound. I kept up with the Iodine spraying, then wrapping the hoof in vet wrap with Duct tape over, to protect the softer wounded frog from puncturing again. WOW...it was rough making it to the stable for 60 days straight!!!!
My sister was recovering from her ACL replacement and I was the Official Chauffeur. The Lord was instrumental in that timing -looking back on it now. Financially it was a killer to drive to the stable EVERY DAY for 60 days through February, and into the beginning of March.
I HAD TO Go everyday though- for the hoof recovery mode of making sure Wa's frog grew back, with no debris or bacteria inside the large hole. My sissy bought me  several tanks of gas through February and March.  I was taking her to her horse's stable and to Physical Therapy, along with errands.
What a Blessing that was for us to get to spend the time together and for me to have some relief from the high fuel costs!
Snow, snow and more snow, we had in March!! By the 20th we had more of the white...the mare and me again went out for a look at the newly embellished scenery. 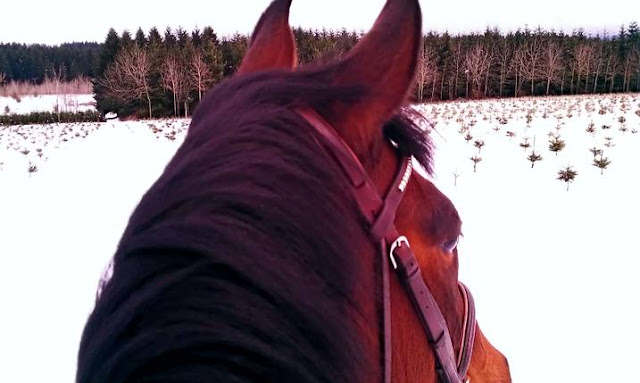 We were HAPPY for the rest of the world..New York in the upper 70's and Midwest in the 80's...and the like- across the country. That's okay,we took it on the chin fer y'all ...putting off gardening and riding ...( well not me, I was riding still) have wet weather and snow gear- will ride, is my motto! We had fun, the mare and me...and some thrilling too....Once she caught a glimpse of something, in a -scary to her- part of the woods. OH!! She was up and turning so fast..I was off to the side and falling ...only to find her under me again..but now we leaped towards a huge tree...missed it by inches..MY!
RODEO. Of course, we went straight back to the spot a few times over, to conquer it all. Healthy fear instilled inside me again on riding, and the dangers that lurk even on -close to home- trails, we've ridden SO many times. 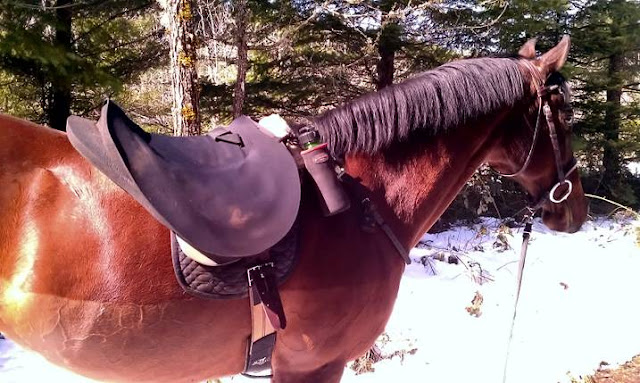 Chiropractor was necessary,  after that stunt.
SNOW, snow and more snow....March again spit out the white stuff, near the end! Out we went in it...but by this time, the grounds were so saturated and slick...truly had to be careful. 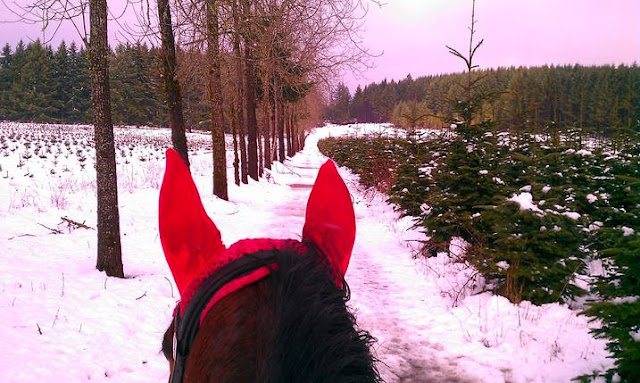 Then last week, on an spitting rain, Oregon day, we went out to graze a grassy trail, me walking the ground with my mare on slicker steep trails and only riding the flats. As we walked slowly up a trail, as she grazed lush grasses. I had been setting my timer each week, 2-3 times through the non snow days of March for 15 minutes then 20 then 30-45. Now, April, the mare is  up to an hour of grass grazing, anti oxidant good stuffs! So...we had been in an area for 35 minutes...me aboard her as she grazed.
She took a step, whoosh...down she went! It was so blame quick that I realized I had better stand up and  step away from my horse, so she could regain her upright self! She stayed on the ground for a few seconds longer, in utter surprise it seemed, then got herself up again. I looked at the spot she slipped...wow, an approx 24 inch swoosh mark told the story. Again..back to the Chiro for me!!
Wa mare now has an Apt with her therapist soon too!
That's about it guys....for the past 60 days. It was full of driving, rehab, riding and furry felines.
Oh yea, I fit Work in on the side also! 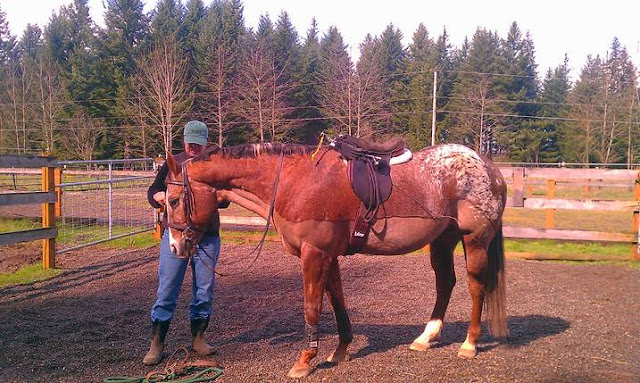 Pantz mare and my sissy with her leg brace off, after 7 weeks of ACL rehab.
I have been taking  lessons from her on Pantz.
Oh, I'll save the Dressage training notes for next time...cool things to share in that department !
HAPPY SPRING, Happy hearts and glorious Easter tidings I send along.
Posted by allhorsestuff at Thursday, April 12, 2012 21 comments: