Laughing it up, for a second time!

This next ride out, a few days after the first local wind storm....it was again super windy! In light of  The "Columbus Day storm" in 1962, this was nothing...but just 3 days ahead of the Calendar day, remembering it.

The leaves were blowing down in our dry October, and they were all green still! 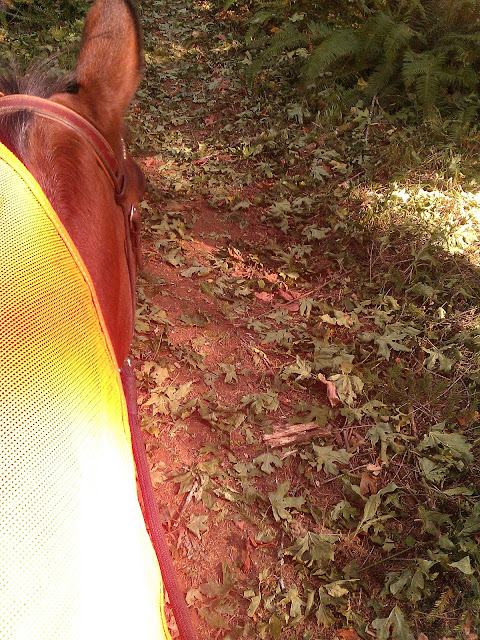 Wa mare again, was perfectly intent on me and listening through the windy gusts and chattering leaves all about.  I laughed at how wonderful it felt to trust her and to achieve a dream; riding my mare in any weather, having her do anything I asked. Trailssage at it's finest!
I have adored this mare all summer and now, into fall's attempts bring winter in. She and I have truly been linked in thought and action. I know her and she knows me.

I had been helping my sister move in and move in and move in the first , second and third week of October ..nothing had gone according to plan. The property manager forgot to have the house cleaned (#x^!/*!wo!) and for some reason didn't order the rug to be cleaned either. So we had her belongings stuffed into 2 rooms and some still in the horse trailer. THEN- as if that was not bad enough, the power went out upstairs! She had been living there as a minimalist...then that!
NOT due to wind did the power fail, but a short somewhere. So we could not arrange furniture and paint, we had to clean and start the fence outside, for her dogs. But at least the weather was WONDERFUL! Sunny, warm not a drop of rain in sight, though we had gotten the word, by the weekend it would be here, in some measure.

I did most the cleaning...a 12 hour day of it. It was terribly disgusting! The owner was disgusted too...he did finally have someone come to clean last minute, and they did not a D---- thing, but steal our supplies! He stopped by after I txt'd my sissy to tell her nothing had been done- affectingly putting off our paint and decorating AGAIN!
And seeing how gross the place truly was, the owner did arrange to get the carpets cleaned. I told him, " I wouldn't even walk in that house with socks!"  It was an ALL DAY into NIGHT process, for him thinking they were not soiled.

While we moved some things into the house last month, I caught a glimpse of -what could be, in my eye! My sister said okay, go ahead... 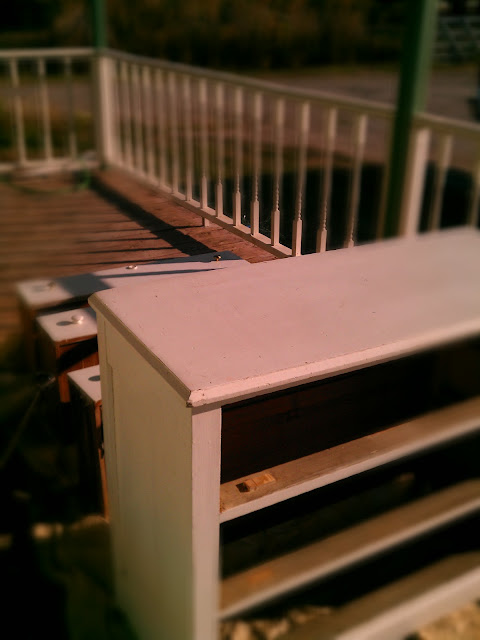 She found this sturdy old dresser at the dump years ago, and to her son's dismay and horror, as she asked him to help her save it from the pile. Some drawers broken, now duct taped. No knobs the same...5 coats of odd paint.

AFTER*
A "Re purposed" piece!
A kitchen island! 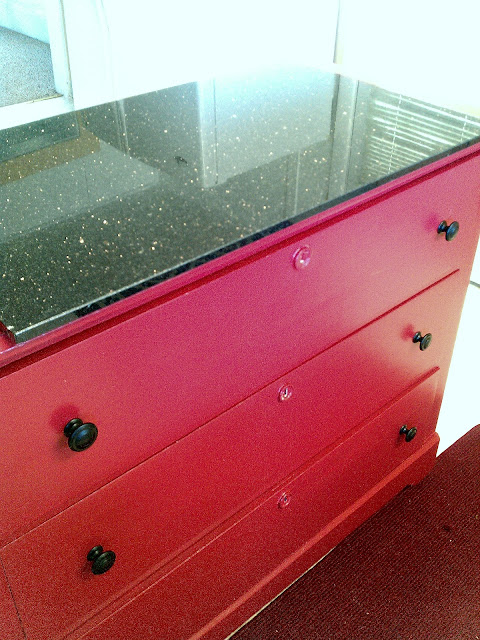 Black granite topper, "Devine"Toucan paint, like her walls. Black metal knobs and inside, I put Faux black leather liners!
We love it!

***************************************************
So..that is pretty much how OCTOBER went......BUT....
Wa had a mystery accident and injury.
I showed up  early on a day I normally can not, due to my work schedule, and found my mare injured. I found her standing out in the field, her turnout buddy was being ridden inside the stables arena. I walked up and said her name...she suddenly neighed to me as she began to hobble towards me...SHOCK and horror at seeing her barely putting her left hind down and the size of her hock!
Being the detective always...I looked her over and over. No blood, no scrapes, no anything, including mud! Not even on her hooves barely a speck of mud from the very muddy field. This instantly had me thinking, she got this injury inside her stall, since there was fresh shavings on the right side still ( her favored side to lay in the stall) upon her turnout blanket.
I took her into the stables and checked her over more and began to cold hose her swollen and rock hard, left hock. There was a minimal amount of heat, only in the inside region of the hock. Hoof cool, lower leg cool. I gave her 2 grams of Bute, some Arnica, Rescue Remedy.
OH!!
So...2 weeks have gone by quickly with me nursing the mare. It is November already! While those on the East Coast battle with Mother nature and "Sandy" storm, I am praying for them as I hand walk daily...praying for recovery for the mare and for the millions.