Laughing in the wind! 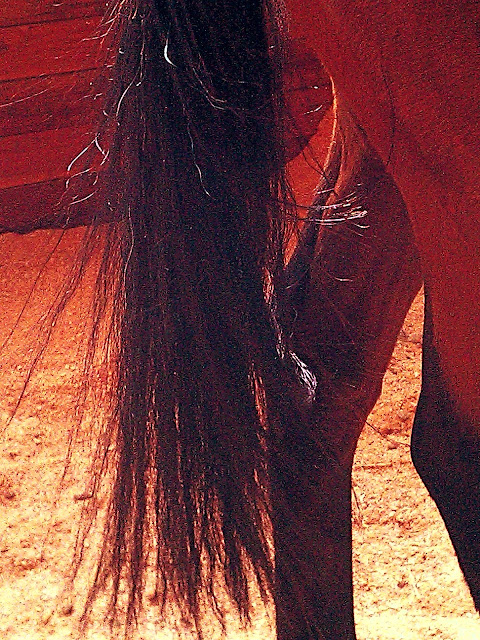 Fresh in from the field, Washashe's tail was statically charged!

A Big batch of Breeze hit the PNW...I am calling it "A Big Breeze " simply because it is still warm and in the upper 70's. Even the high winds are warm.
My  favorite station "All Classical 89.9"  is having a difficult time raising the $ for the non profit operating budget this week -due to everyone is OUTSIDE and not in, listening to the radio, 'cause it is still August like!

Driving along to go see the mare on the day the above photo was taken, and  I was  pretty excited to ride and get out into this fabulous Autumn we are having. It has been 75 and lovely. Yes it is a drought, and leaves are shriveling up verses turning color, the ground  parched, fires have now sprung up in forests of Oregon- and in the city too!
Only .25 of an inch of rain since July.
There is nothing I can do about all that; aside from enjoy the sunny, warm and bright days and not have a  fire in the Fire pit.

On this day, I was warned before I had left my house by another boarder, that the winds were fierce and to be careful if I chose to venture out riding. Having missed seeing WaWa for 2 days, I refused in my mind to worry about the winds. Suddenly as I turned a corner, there were flashing lights and a vehicle blocking the road., very abruptly stopping me.  I could see why too! A huge fir tree had fallen across the roadway. I turned around and went a few miles out of the way to the stables. I tried to warn my stablemate, but she was at the tree from the other direction already.

Once at the stable,  I walked in to see another boarder in the arena with her spooked horse. She told  me, "she was NOT EVEN going to ride outside, or in, for that matter!
I thought, "humm, I wonder about today"...but persisted in my plans to ride out.  The mare was in a fitful state, all trotting up and down her run and whinnying. She was not too keen on grooming and kept looking behind herself. I was patient, though she was a bit nutty. I enjoy the process, even when it can be dicey, it's all my mare and I just work it out with her by addressing her with kindness.
She clearly was reacting to the surroundings - BUT -the one thing she was also reacting to was my SHOCKING touch...I noticed quickly, that every brush motion was making the dirt fly back onto the section I just brushed it off! AND- I was shocking us! Once my mare hopped up, as I touched and shocked her jaw..so I had to employ the only solution I could come up with.... Conditioning spray, like each time I brushed! 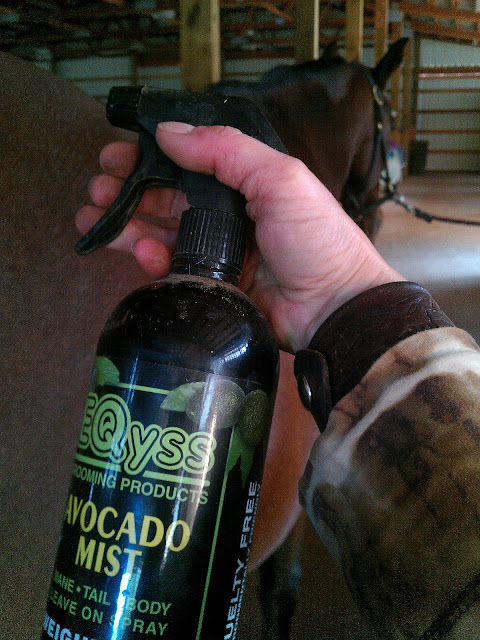 Another boarder showed up after awhile, and tacked up in record time, headed out with her Orange hunter ("see me") attire. She quickly came back too, saying, " It was really scary , I heard the trees knocking together and stuff was falling all around".
So, with that, we headed out to ride, but, I decided to walk the mare for the first 1/2 mile before mounting! 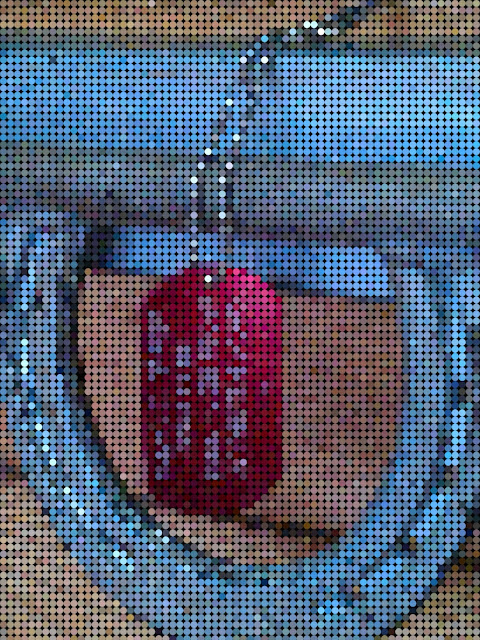 I had gotten an important package in the mail from a former boarder, she does engraving and tags, for all sorts of things. I have really wanted to have identification on myself, and on the mare, in case of separation
( I am dislodged)  or injury. This gal made me the" I.C.E. tags"( in case of emergency) that I attached to my mare's saddle, and these above go around my neck and under my clothing.
Ever since a  friend  I was riding with was bucked off and injured badly a few years ago, I have wanted to make sure; if I were in the same situation,  my pertinent Information would be available so
*** ANYONE could call the right people, and also know what medical information was needed for me and my mare. I had such a stressful time trying to figure out how to use my friends phone, in the heat of the moment when I thought she was dead, that I planned on getting this info made for myself and my mare.

I was thinking and hoping that it was not Symbolic that-TODAY- windy, windy as it was, would  be a day that the tags were put to use! 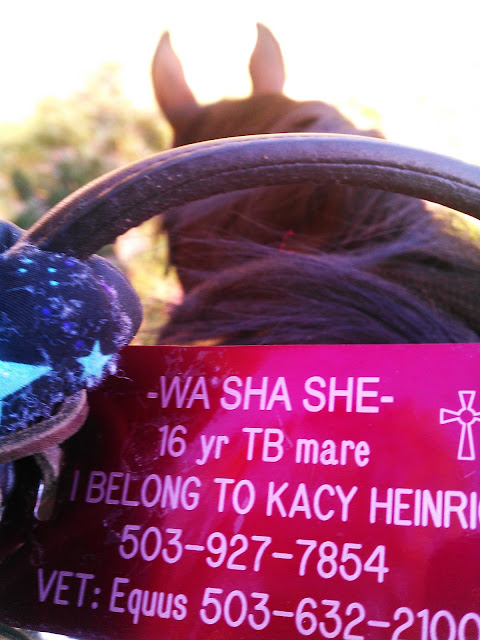 Reverse side is her boarding info and my sister's number as well, if I am unreachable.

Washashe mare was unaffected by the winds, as we walked along. We both watched some yellow leaves float curiously above our heads . They dangled and danced as if birds, above us. It made me laugh as the leaves seemingly played! It was wonderfully warm, though windy.

I choose a nice big stump to get aboard my mare and off we went...these feathers on Wa's bridle, I found in past weeks rides, began to dance and flutter too. 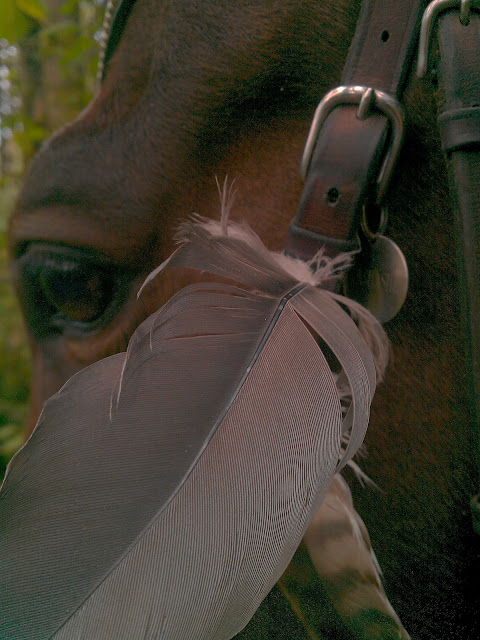 I was amazed, truly, that Wa was so calm and  this made me laugh out loud too! We were able to practice our "Trailssage" moves. We did serpentine's with me practicing keeping my hands still,  but in front of me, creating a wall rein that asked her to turn, as my torso and hips did too, with corresponding leg position to guide her. I have begun to divert my mare's attention this way, as often she focuses on  turning  homeward when approaching a trail intersection. If she becomes rushy I instead of a soft serpentine, choose a straight line to a destination and a carousel turn, once we reach it. It has been wonderful to have her listen to me and she does seem to enjoy the conversation.
This day at our intersections, she was soft and responsive which made me laugh with a gleeful happiness. Who'd have thought such a windy day, would render such positive responses??

We came up a tree'd lane that was entirely covered with fir needles. It was so neat. I was hoping that this one area I chose to ride through, in the thicket of large evergreens, would hold fast to their limbs in the fierce winds! The needles made sounds like crunching snow, as we walked into the mottled  looking trail. 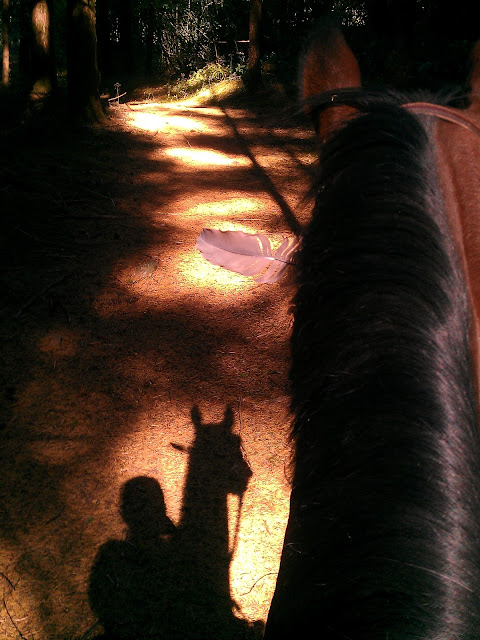 Aside from that covered area, we stayed to the open. We practiced canter departs and I was so happy that we are in sync now with my new body stance. My hips are much looser and this day, along a straight long road, I asked for canter departs from halt and from the walk. The mare took the aides well and we did right lead for 4 strides then a trot , then left lead for 4 strides then trot. I was again laughing in the wind...as it was not effecting us in the least!
We went  riding further after our canter to cool down. At the walk I asked for some little jaw flexations. Left eyelash, then right eyelash. I noticed something that has not happened in some time, largely due to my former stance of blocking her. She had white lipstick not only on the left...but on the RIGHT this time! Nice.

We headed back after some more trotting and giggling coming out of me....this windy stuff ain't so bad. I do think if it were cold- that it may be a different story altogether. But for this forcibly windy day, the mare and me seemed to be enjoying the unique nature of it; the warmth, being out together in a totally absorbing wind storm, taking action decisively.

Laughing  (snorting blissfully for the mare) in the wind was fantastic, just what we both needed!