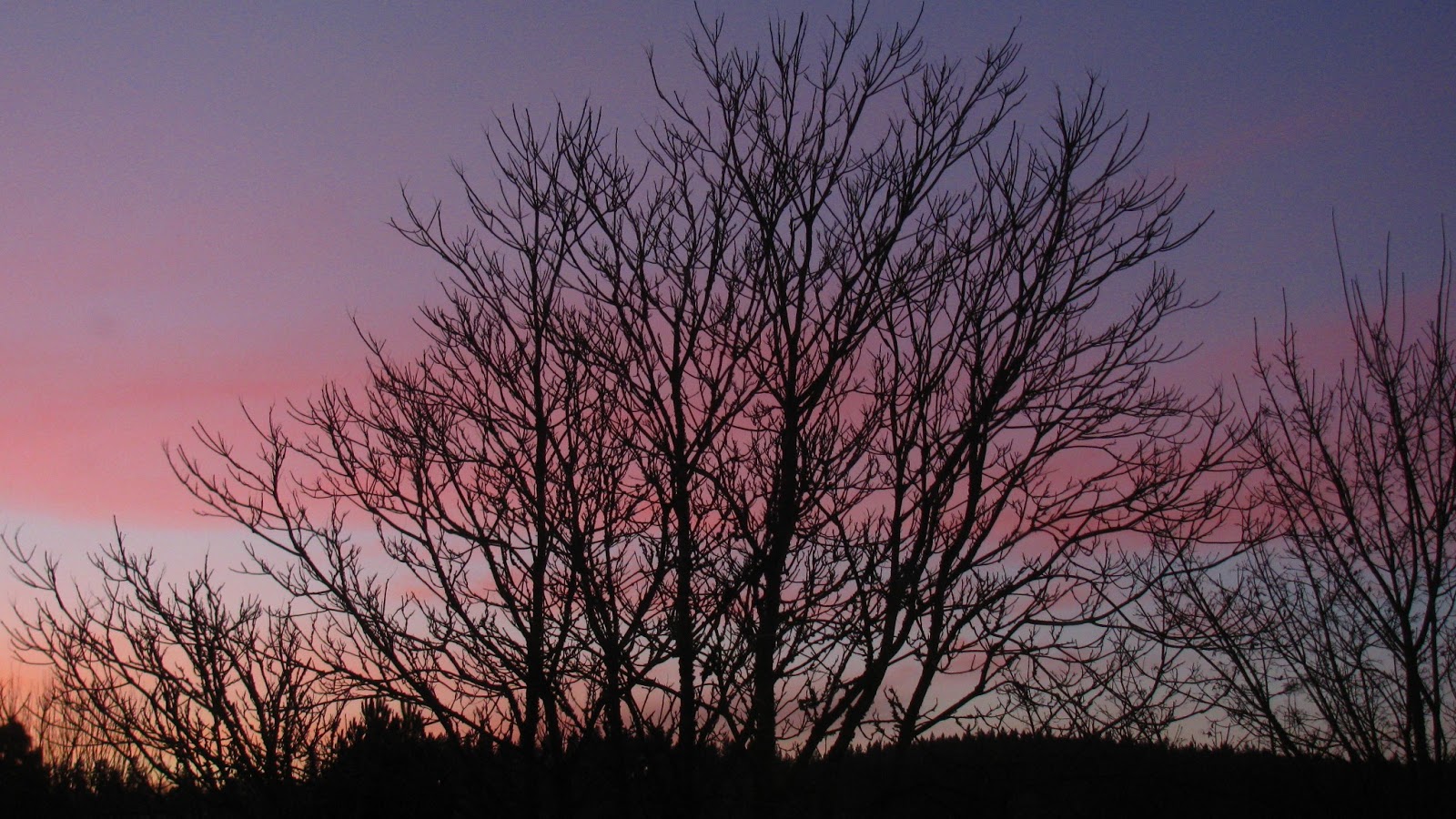 Evening Phone shot, out our back window

I grew up with my dad saying that old phrase " Red skies at night, sailor's delight. Red skies at morn, sailor's take warning." So, last weekend when I had the day free to myself, I took a special delight in our "false spring" and took an offer to ride with a friend .
Having to  trailer off property, only to the vet's place the past two times, I hoped the mare would be receptive to hopping on the trailer, as she normally does!

The mare was wound up somewhat that morning, as we had strangers trailer into the stable, for some lessons. So sensitive she is to changes and her surroundings. I coaxed her to come to me, inside to her stall from the run, and brought her out to load- after -I had packed up the trailer with all the gear for the days ride. I knew better than to do much in hand, while there was a hubbub of unfamiliar horses about. I just put her trailer "head bumper" on, and shipping boots and we walked away.

She was such a good girl...but, kinda uppity for the walk to the trailer. Not wanting to make another trip to the tack room, I had my hands full,  foolishly so, with more gear. The mare trotted  ahead cutting me off, then around me.  I just stopped and allowed her to do so a few rounds. Then I insisted she stop, back up, and only take a few steps before halting and waiting for my body to go on again. This way I had her attention, and she did calm down too. There was no hesitation whatsoever, to hop right on the trailer either! I so love this mare!

Arriving at the local State Park, "Milo McIver", there were about 15- 20 horse trailers in the lot already! It is a huge parking lot though, and I was able to park to one end. My friend had to cancel last second, but that hindered me not, here we were and with Blue Skies! 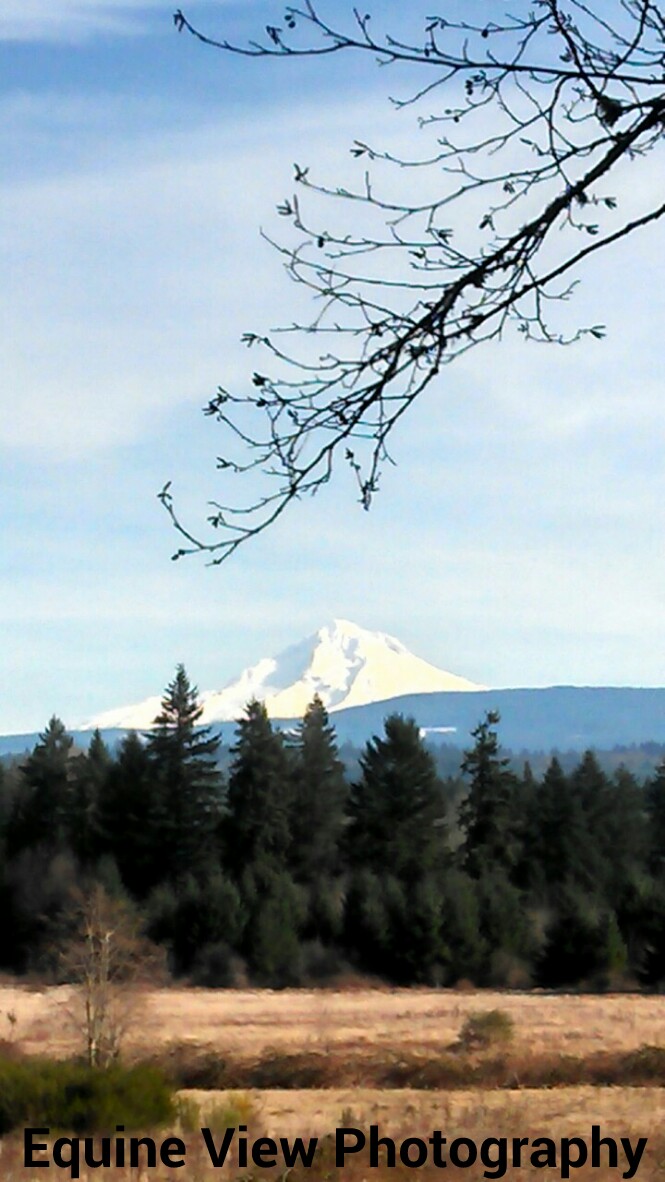 Phone shot from the top of the park

As I was tacking up silently and unhurriedly so, taking in the sights and other's commotion to go going, I realised there was a huge rig coming in and the spot next to me would be the perfect spot for them. I saw the gal driver scouring the lot for the best scenario for herself. I quickly moved my mare out of the way and waved her in. She smiled, and adjusted her rig to come along side.
It was just her this day, with a living quarters 3-4 horse rig!
After she parked and got her little Arabian out, she said, " I know you...what is your name again??"
I said hers first, "You are Becky!" Yesserie, we know each other from a mutual friend that does dog agility. She also has this wonderfully contagious smile and attitude about her. She called me up one time, after she found out I may wish to do endurance riding, and offered me to ride with them and she'd show me the ropes. Her photo is used for the "ACTION RIDER TACK" magazine. A real go getter! 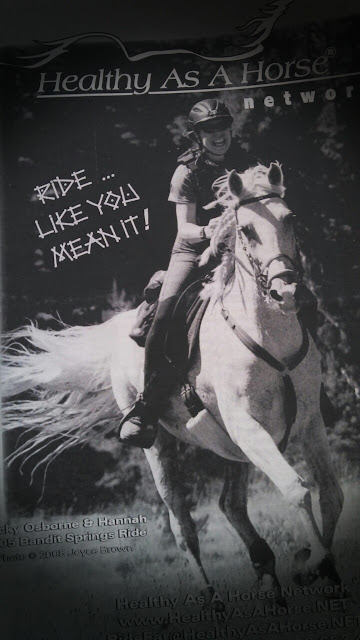 She was tacked and ready to ride out in 5 minutes. Decked out and matching in her gear. I should have gotten a photo, but was not in the mode yet.
I too was on the ride in a matter of minutes...the mare was astounded at all the activity around us, me too! I set out a direction I did not see any others riding, in hopes that we may not have to follow any or lead any. 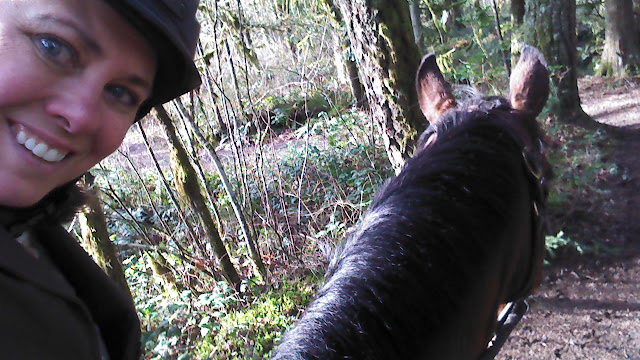 The really amazing thing about this park is that, even though you
can be riding with 20 or even 30 others horses, sometimes you see none! It's big, and this day I was looking forward to-come what may- since we had not been out at all.
This shot truly made me crack up. Us in the shadows, the mare wanting to go,I could bare see anything so, I just had to shoot it, forget about it and go! Normally, I would re shoot the shot over and over, till I had it the way I wanted it to look.
This is the result- haha! I never even saw those 2 little trees, off the the sides! 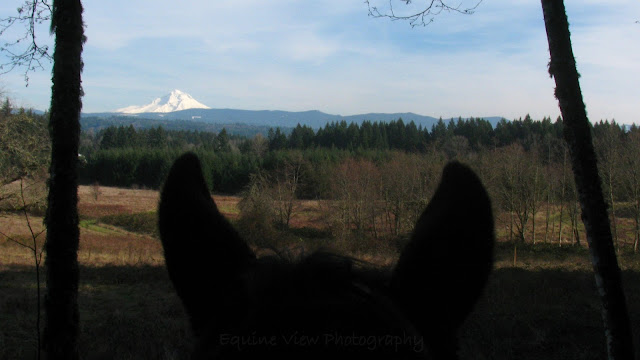 The mare was happily snorting most of the ride. Even down the hills, which were NOT slick, as this park is maintained so well by O.E.T. (Oregon Equestrian Trail riders)
There were some new objects at the park.....some obstacles. I failed to get shots of the Gate and the fenced in pathway, but the mare really stopped to look at them. We've been riding here for 6 years and the mare notices everything new!
I did get the shot of the polls here. They were large CONCRETE ones...and spaced out( photo does not show how far) a bit too far for walking, I am afraid. The mud was so deep also, I would not risk hurting my horse to go over them. 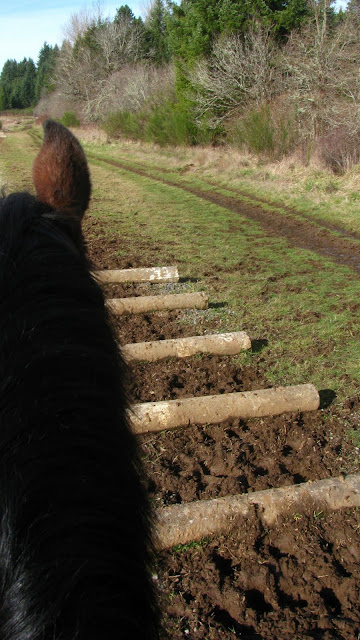 Though Washashe mare was wanting to trot and go-go...we held it down to a walk. I knew how far we'd be going and the hills that were to come.

We rode the normal trail around the perimeter, seeing only 5 horses this day, out of all those I knew were out here! We did not take the side line trails like the Dam road  jaunt or cut through the middle to make more miles. The 4.9 mile ride we took, looking down upon the river here from being right next to it, a mile or so earlier, was plenty for our first outing. 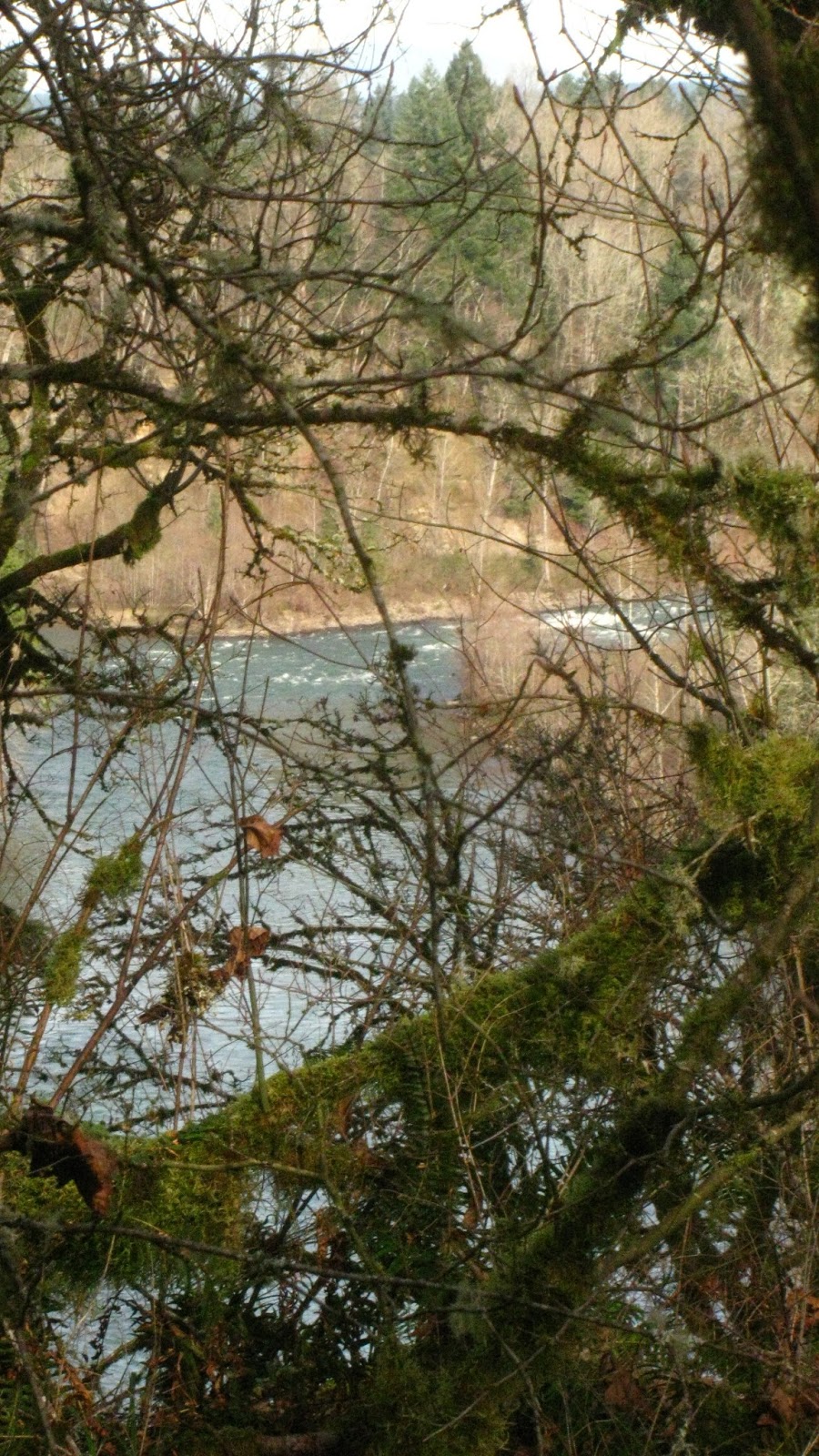 Soon after stopping for this above river shot...the rest of the hills, back up to the top came. The mare stopped a few times to ask, "Really, we still going further?" She forgot about her need for speed and we took them as they came.
I knew this ride would wipe her out a bit, but I also had good things planned, for afterwards.

Once we returned, I un tacked the mare, and proceeded to the goodies...none of it she'd have, except the massage . No beet pulp, no oats no water, hardy any grass....she just stood and stared at the continuing saga of riders- coming and going. 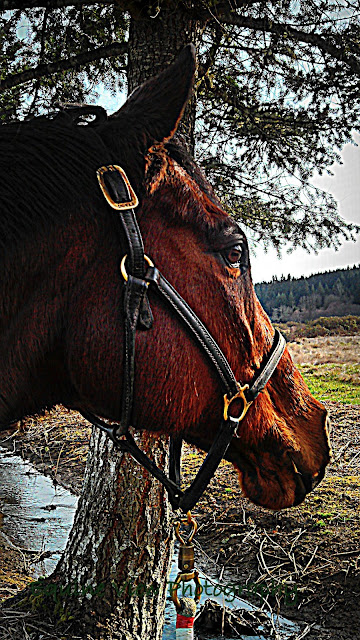 So I decided to give her a tube of Electrolyte paste, and call it good.

While most of the trailers were gone...a hole new group of them kept filtering into the parking lot, as we readied to leave. More and more came in, this fine False Spring day. To everyone's Delight, it was a beaut of one- to go riding! 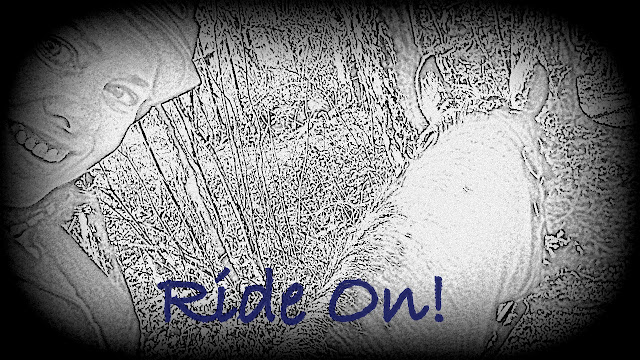 Posted by allhorsestuff at Thursday, February 07, 2013