While January was WET-WET-WET, this newly arrived February, looks rather nice.
The mare and me rode out during those very- soggy- days of last month and also, some of the prettiest sun spot ones. Sometimes  we  barely stayed dry long,  for the next front would roll in as we returned to the comforts of stable-cover! 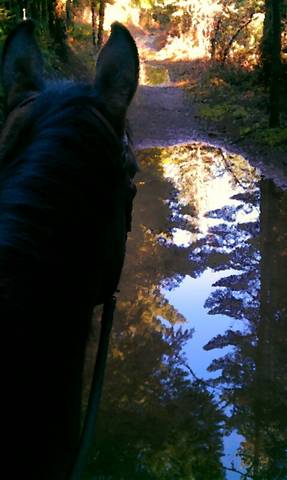 I got to try out my new -Water proof quarter sheet- my sissy got for us at Christmastime. She intended on making the bottom piping ribbon RED, for us ALL AMERICAN RIDERS...but her machine broke as she stitched it, so we remain green till another time ( hope I won't need it till fall ) and that is so fine with us!
The sheet was fabulous in the downpours we strode through, keeping my leg covered to my mid boot and- the mare's rumpus too! 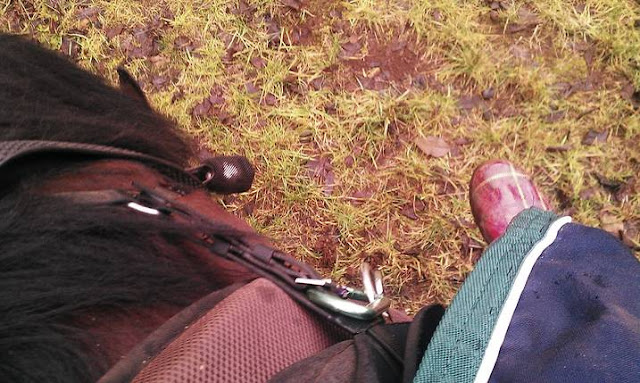 Wa mare was some what SHOCKED that we were going out in rain sometimes. There was actually a  person walking somewhere behind us, she was keeping track of  them with her ears here~ 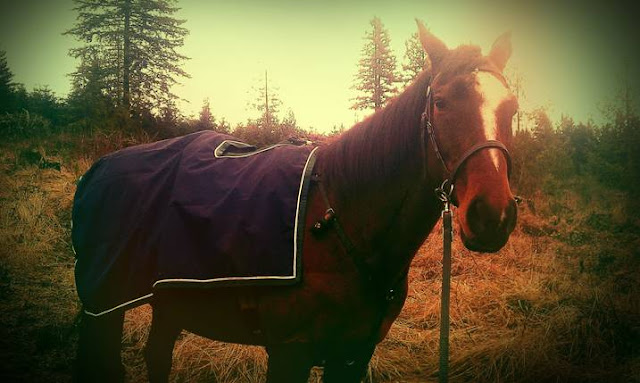 She was very pleased  to go even with rains falling;  walking nicely out, as we left the stable most those sogged rides. The totally flooded and muddied turnouts kept the horses in their own runs for a week or so.

When the snow finally melted out in the country, it was replaced by these warmer, heavy- heavy rains.
All the horses hooves were getting so soft! I began to ride out with Hoof boots, every time, for my mare  began wincing upon any rocks at all.
I was so toally pleased with my mare all these rides, she was willing and able, though we mostly HAD TO WALK, for the grounds were slick and sometimes deep with moisture. When we could find a place to trot or canter, she was meeted and measured in balance and calm. I  love her more and more, and riding  on bareback saddle has been glorious...my core has never been better...I have stayed totally fit this winter with riding the softsaddle.

After my rides, I would jet on over to Pantz's stable. My sister injured her kneeVERY badly during a work physical training, in late December. So BUSY -BUSY- with 2 horses and 2 stables!
It ususally was dark by the time I arrived to see Pantz. But, the snow shadow of her mare, made a neat photo for my sister . She had surgery scheduled and while she managed to keep working light duty at her job, I made sure her mare was alright, up here in Portland. 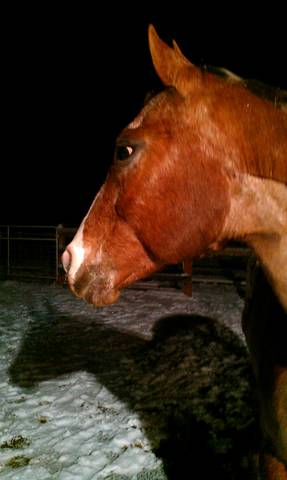 It began to sunshine a wee bit, just before February came along, and I was able to ride with one of my stable freinds! 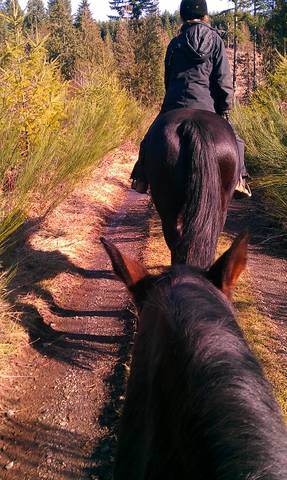 OH! The glimmers of warmer times ahead, made these rides perfect- even if we were all decked out from head to toe now -with insulation!
The air being so very crisp on these gorgeous "Looking" cold, dry days...the mare's breath hung in the air, like fog! 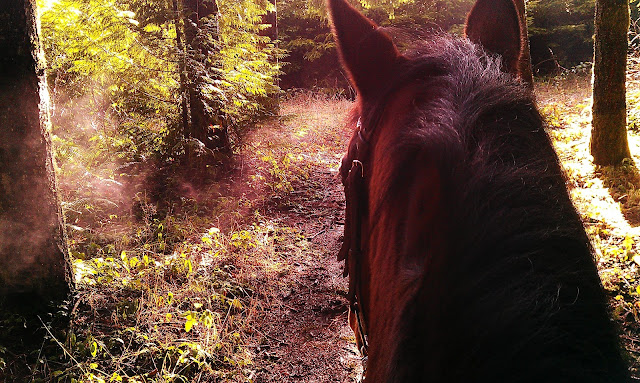 A really funny thing occurred to us on one wet ride out. It's only funny for me,  because my mare is well spook proofed. We had the quarter sheet on and while it is rain proof it is NOT wind proof!
Some wind came up fast, from another storm coming in before we could get back.  We had just come out of the woods to a clearing, where the clear cut area  slash was being burned away in huge piles. A far off pile of slash was smouldering...the whitish smoke would appear thickly,almost animal like, then get blown off. It would appear, and then disappear. The mare was fascinated, and high headed, holding her breath watching this. We could NOT smell the smoke, for the wind was coming from behind us.
All of a sudden, as asked her to move forward and closer to the billowing white forms, the wind caught the quarter sheet! It billowed too, above our heads, as it came off her back end- almost over and off ! I had a flash of thoughts quickly enter my head about if she'd react but- no problem, she hardly noticed. She was way more intrigued by the smoke
. WHEW! I knew right then, I would have something sewn upon the mid section of the quarter sheet, to the front of my legs, for keeping it RIGHT-WHERE-IT-NEEDED TO BE!
Excuse my photos..they are ALL from the Phone these days. My antiquated computer has totally shut me out of loading any more images from my camera. I really must  go forth and trade it in soon. So for now...the smart phone comes in handy. I found a neat case that allows me to take photos even in the rain, though it does add a sleight "blurry softening effect" to all the photos, through the plastic.
Our water world trails, at every turn we made a couple weeks in a row 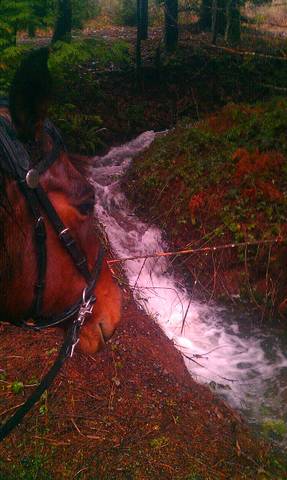 It brought many a new mud bog 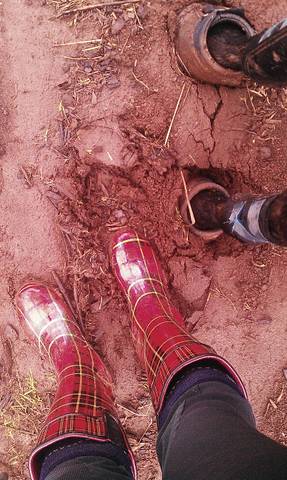 Tried to turn down this trail, nope, tis a new creek now! 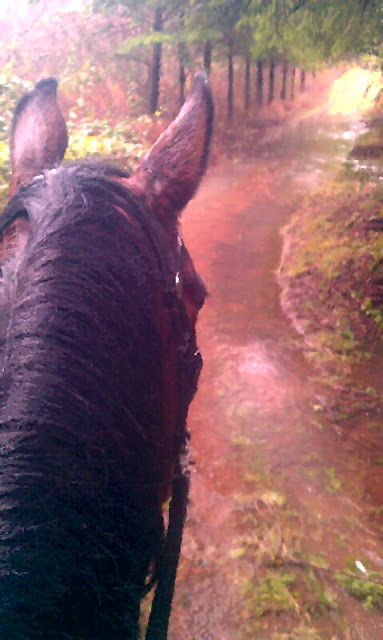 How about this way? 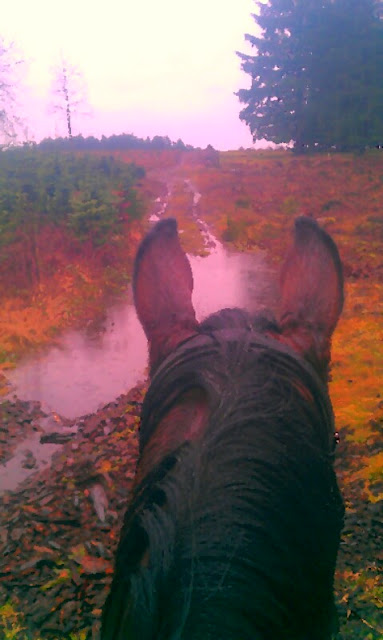 This road was okay, by the ponds. The waters were contained and stayed inside the set boundary. All these are from 2 weeks ago.
Then, the last Saturday in January, I got "THAT CALL" again from the stable. My mare had gotten injured running around when some fireworks or machine gun (sounding )shots had spooked her and Theo at dusk, when the stable hired help arrived. My B-man went out as soon as we got the call.
It appeared to be a terribly deep cut  through my mare's frog, a bad heal wound on the same Lf rear, and a mysterious edema- on her right chest, the size of a quarter roll...it just hung there. She definately was in pain and bleeding badly from the frog. She was weaving and yawning to try to calm herself.
I have this cool can I found at the second hand store, it has Greek looking people and horses...and this dude, he is doing a TTouch!! 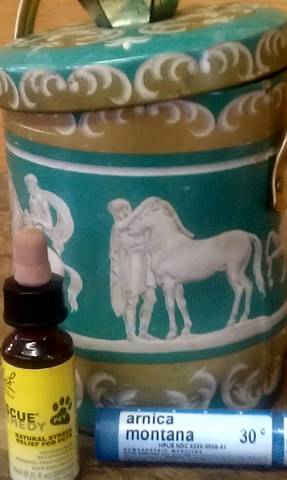 I have Ledum Homeopathy (puncture wounds) -Anrica  and Rescue remedy. I gave them all to her in some oats.  I "TTouched her" then  Nolvasan scrubbed the hoof thoroughly, before an Epsom salt soak for her  Hoof that was injured. The good thing was, it bled SO MUCH...if anyting was in there, it got fluched on out. It did appear to be a very clean cut. But boy, what a bruise...she would not let me touch it hardly!
She seemed to appreciate all and calmed down very quickly.  I also gave her 2 grams of Bute, put standing wraps on her hind legs, before we finally left for the night.
WHEWY!
I'm wiped...double horsey duty, mine and sissy's and double duty with my own, making sure to clean, soak, wrap and also cold hose legs and chest each day last week.
So, next post will be the outcomes... Sisters Surgery and my mare's health overall.
It's all pretty good!
Posted by allhorsestuff at Monday, February 06, 2012