One Ride at a Time 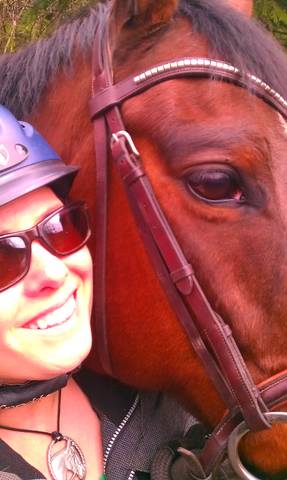 In the fashion of " Calm, Forward, Straight" blog I thought, as I tried to get my horse's head, and mine, in frame by only an arm's length away! C has a wonderful training blog, if you've never met her and her TB horse Val...take time to go see her today!
I think her arms are much longer than mine!

It was NOT sunny the day I found my Sunglasses on the trail...but I was so happy to retrieve them from the dirty resting spot I had lost them a year ago, I documented by attempting a self photo.

We have had much rain for the past weeks and a few riding days. YES, I have been riding, rain and shine...but not too much may be accomplished in the slick, but a soothing horseback outing.

That is what I have been seeking too : a soothing, calming ride on the mare. She has complied nicely with no falls, or spills or spooks. THOUGH-I did apply "Vicks" to her nostrils twice, in the past weeks. One week she KNEW there was a creature lurking about, behind the shrubbery, yet could not see it. The Masking scent of the Menthol, made the ride much calmer all around, as she had to wait to freak out " IF" she saw the danger..and no danger appeared for her, just as I thought.

Many things are going on here in our household...I've been stressed, almost to the max. So, I have not sought to train or to accomplish, just to soothe my mind upon my mare, as we stroll along in the wooded delights.
My man has had 2 health scares, with 2 ER visits and one Ambulance ride, in the past 3 weeks. His heart the first time, and 3 days ago, he blacked out at 2:30 am..hitting the deck in the house. It was so loud, it effectively woke me up -got me out of bed to find him in a heap, on the floor. OH! That was a terrible sight and flash of thoughts all of at once! I called 911 so fast...even before I checked his breathing.
We live 2 blocks away from the local Fire house so they were there within 2 minutes.(Almost faster than I could get off the phone and get dressed!)
I've never had so many men in the house as that morning...Ambulance, fire and all of them, right in the parlor!

None of the EKG's, or monitoring of both events were conclusive for heart knowledge for us to pursue any treatments. Though, it has my man going to the Dr. and also the cardiologist. Plus it has him taking better care of himself. 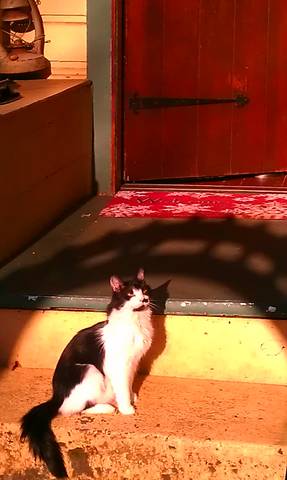 Also, our old man of a kitty Norm Thompson, became so weak and frail as he had stopped eating, had to be taken to the vet's for his last hour with us. It was a rough week and my man's boy was so good as to never miss the cat box. Norm even sought my man out, even when he could barely stand up...he layed in my man's lap, right before we took him in.

We sure loved that skinny cat with the silky long hair, even if it were only for 3 months. He loved us and we loved him! I got to hold him one last time... my man called me as I was at the stable, so I rushed home from riding the mare to see him. 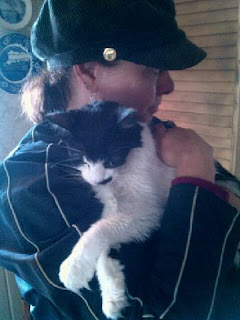 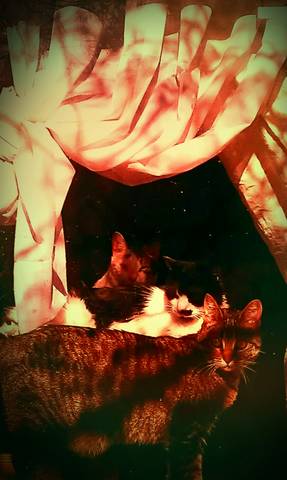 There is more rough stuff going on, but that will remain unwritten here...too much of a downer. I would like to share some horsey rides with you all though... just some, as we have still had much torrential weather and only some were to be had.

The most fun we've had in a long while was the day in the 80's..and sun shining bliss abounded everywhere!!  it was after we lost Norm but before the last ER visit. Funny thing was, out of the 2 weekend sunny rides...I saw NO ONE about...it was amazingly quiet, and JUST WHAT I NEEDED after all I'd been going through. The mare was ready too. We are taking it ONE RIDE AT A TIME for our minds health, these days!
The private land below us is being logged. We are officially kicked off of using it. It has about 1 mile of road we must ride to get to the main trails we ride all winter. They stay nice and are not muddy. That private land also had the OREGON TRAIL JUMP COURSE I made on it too...I surely will miss that!
So, for now it is hoofin' it across the street to the logging roads. Some trails, but MUCH MUD! Hoof boots are required for riding there for us. Blessing is...we still can ride outdoors somewhere, right from the stable!

I booted up, the mare and me both. I have to walk the muddy areas, as hoof boots are rather slick and it's just safer for us to do it with me on the ground, for the short stint to the roads. We were off like a shot once we hit those roads...cantering bliss..and no matter what road I faced myself towards with intent, the mare willingly set to it. We had so much fun!
Here we stopped half way out for grass munch and lunch for me. 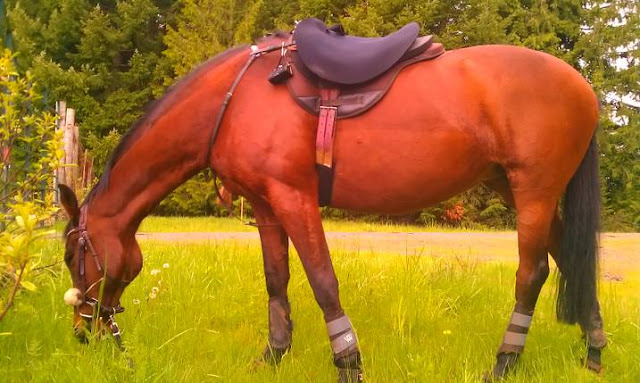 As you see, the trace clip is nearly all shed out, and the mare is in fine shape. I have been giving her a Gamma treat, twice a week, for muscle development.
We rode till there were no more places to go out there..about 12 miles. No lingering thoughts of any toils remained.
This one ride made us both smile( I think)...we ripped it up, on a certain sandier stretch of straight roads. The mare came back down to a nice trot with her 'High blowing" happy self. Just gotta stretch those legs like that sometimes!

So that's it for now...some training news to share and other stuff about my sis and Pantz mare, next time.
Until then, It's one ride at a time~ for health.
Posted by allhorsestuff at Friday, May 04, 2012