Looking to the future 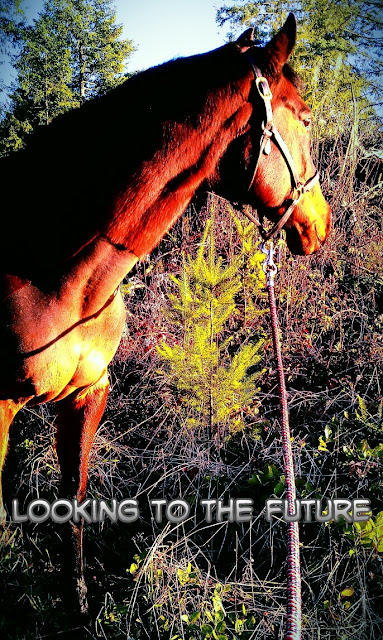 Hello there everyone!
I have sure appreciated all your lovely comments and emails regarding my disappearance, and inquiring in on the mare. It truly has been a super busy- past 12 weeks of Thanksgiving and Christmas festivities, sprinkled with daily rehab for the mare. My rehab will come soon I pray, with maybe a  ride with her.

I think she is almost back...though I wonder if some injuries of anyone-human or horse-  ever really come back fully to normal? With that in mind, I have tempered my eye, as I look upon Washashe's movement and general appearance of her left limb and hock. So many people have asked about what happened. I truly believe she got cast, maybe even struggled with her portable grazer inside the stall.

We've gone to the Vet twice, had multiple X rays that proved there were no bone breaks or chips ( which is very good). The real information regarding Washashes's injury came from my Equine therapist, that is a Vet certified Thermography expert. She was on the scene a little while after the injury, and then again several weeks after. She told me with her experience on these matters, it was not a kick but a trauma that included her bone surfaces all around the hock capsule and the long tendons and ligaments that run from her hips through to the hock. The heat/cold  images are truly telling. It is invaluable to know "how" to treat an injury because one knows "WHERE" the injury is. The swelling told us the hock was involved, but the heat readout indicated it was above, in the soft tissues. 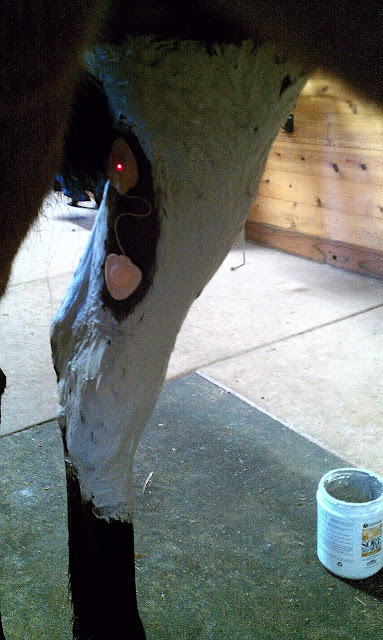 The above  photo is a" Micro Current self adhesive patch" by "MATRIX" and "Sore No More's"  Arnica cooling clay poultice. I have done these  2-3 times a week now for 2 months, along with 10 min. cold hosing twice a visit and a twice a day 15 min. stints of hand walking . She also gets a massage once a week too. Busy, busy rehab!

While Wa mare was certainly happy to see me every day (sometimes trotting to the door while nickering)  and very happy to get to the outdoors, or walk up and down a solid surface via roadway, aisle way and more recently, softer arena ...she grew tired of the routine of doing JUST that, like her momma was! 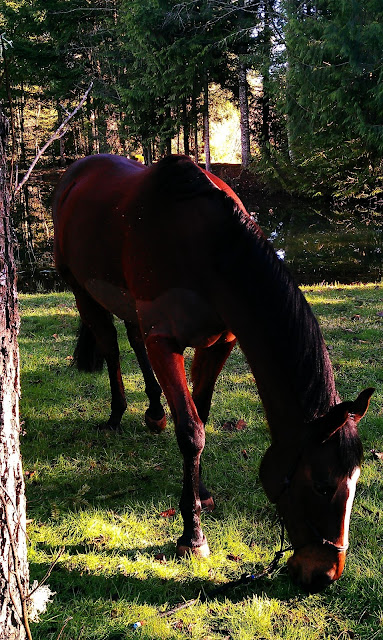 She did enjoy all the bites of winter grasses...but what a long haul of minimum movement, while soft tissue healed!

IN HOPES OF RIDING AGAIN.... just 2 weeks ago, to keep my spirits up, I gave the mare a mini-clip. You can barely see it in the above shot. Just a partial neck, chest and girth area. Oh and, one day before that clip, another boarder came in with a Western saddle...yea, we tried it on for size...the mare not too keen on it though! 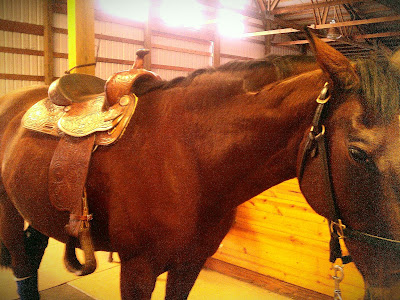 On other fronts of life,
my man and me have spend lots more time together, as I mentioned ere now, with me being home alot sooner nights. We'd sit with the kitties and stay warm...it has been ultra cold and grey in these parts. 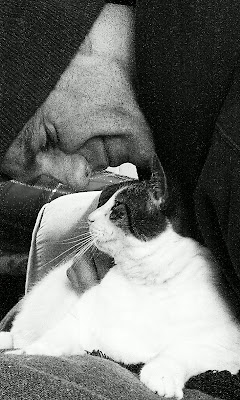 And...I did hint some, last post that I was RIDING.
Not mine of course, but my sister's rescue horse, D'Apple. She is Anglo/Connemara. She was the last of 17 horses that got seized, 2 years ago, to be adopted.
My sisters had her in a nearby town, pastured for free..they drove 50 mi round trip to medicate her badly broken down self. She has EXTREME allergies and was raw/bloody from bug bites. It took nearly a year to rehabilitate her body and mind from the abuse and neglect she had been living in before.
My horsey sister talked my other sister into keeping her. And my newly horsed sis told my horsey sis to come get her...that 50 mi drive was too much! So, she resides at Pantz's barn now.

She is of unknown age...somewhere between 12 and 20. Two vets said that. She still had Wolf Teeth last year. Too bad but, we know that she had been ridden that way, so unfortunate! She seems to have no formal training, so my sissy started with groundwork and lunging. It was rough, but she really seems to want to please.
She is SWEET!
D'Apple 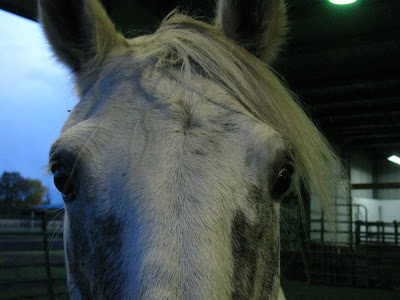 She has  "Blood Shoulder" markings, which are red roan in color on her. But she also has many, many black looking dapples..those are her scars. Both sides of her face, belly, shoulders,withers, legs,hips and rump. 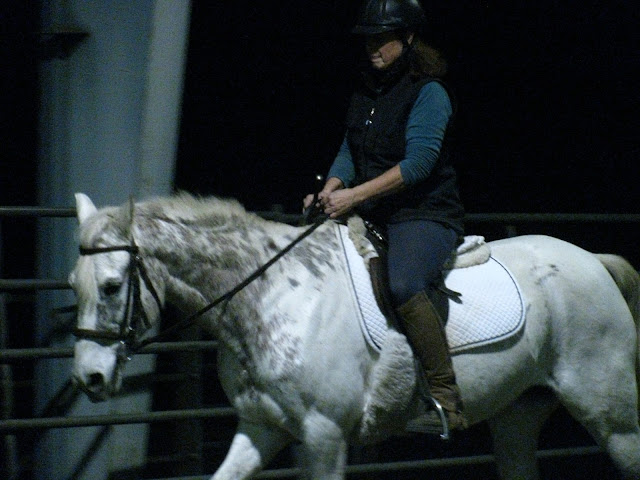 So, I helped my sissy to start her. She had gotten on once, asked for go and the mare wouldn't move. She asked till she got a few steps and then got off. I helped with the second mounting, a few days later.
I lunged her my first time with her, then got on and waited to see if she'd walk, or what she'd do....YES...we went a walking! I used verbal commands that she responded to on the ground, for pace and stopping. She is severely reactive to the bit... ( I would have used biteless- but sister wanted to use the bit ) so all communication would be with body language...what a teacher she is!!! Only would my sister allow me to squeeze my fists for anything( no demonstrative lead rein or anything of the like)...all was me turning my body or simply breathing out, while stopping my motion for half halt or halt. Fantastic! Steering was terrible if you tried to do it, with your hands...but if you did it with your seat and legs, she'd go anywhere.(imagine that!) She really made tons of improvement each ride. I leaned so much about how I will be riding my mare soon... subtly!

So, back to my horse front..... the last saddle I tried fall of 2011 was a  used "Stubben Tristan". It turned out to be my sister's very first Dressage saddle! It fit the mare well and I needed stirrups for the coast  horse trip that fall..so I bought it at $300. I had to pad the cantle, as it sloped back to much. It went well for a time but, my BUM was being squished...the seat was too small for me. 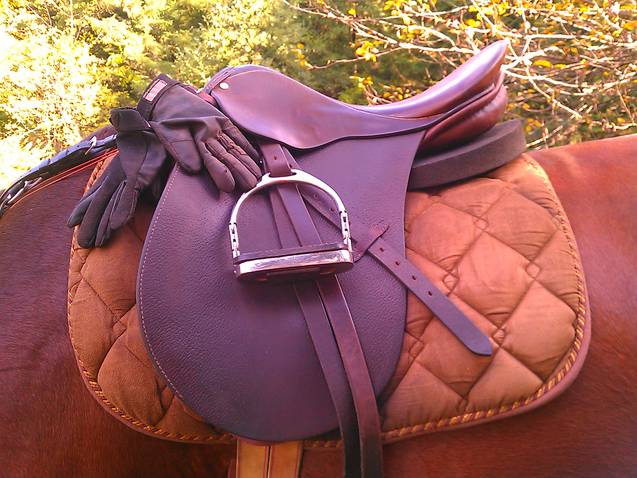 I recently sold it to my sister, and though I HATED to see it go, because saddle fit is hard for us.... it fits D'apple wonderfully. So armed with $300 and some other Christma$ dough, sister sent me an ebay add last week. ANOTHER Tristan!
But this time, it was my size in the seat! I got it for $250! And the gal selling it tossed in a saddle pad, leathers, and the NICEST saddle cover I have ever seen. It arrived this week.


It actually fits her shoulder better than the first Tristan. 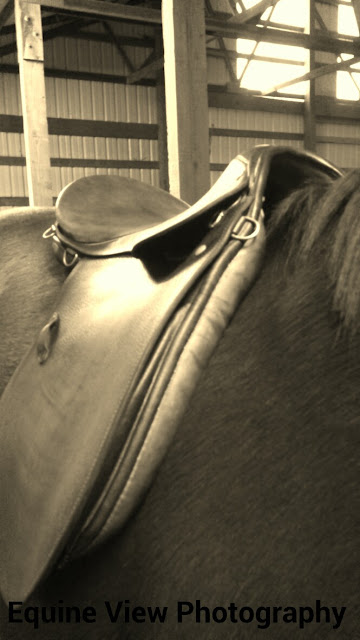 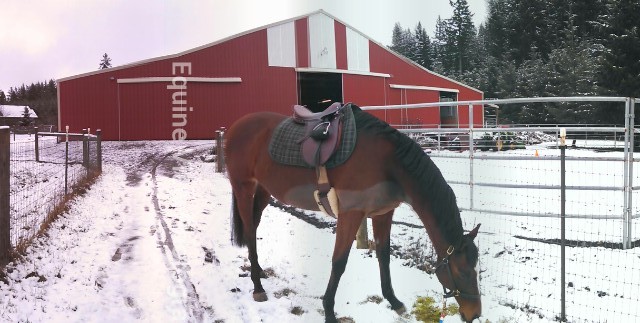 And something else new...today it snowed!
A Bright beginning!
Posted by allhorsestuff at Thursday, January 10, 2013