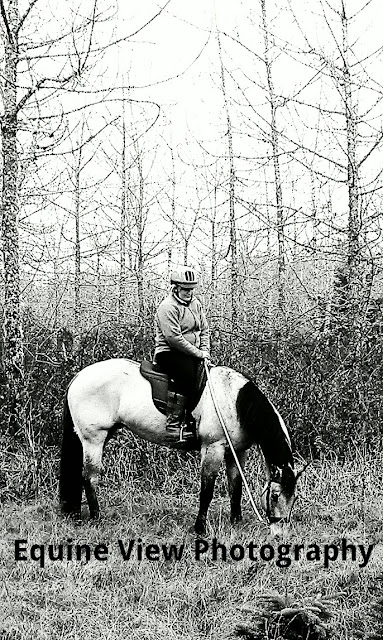 Last week, as the mare and me hand walked into new terrains, we heard a clip clopping canter of someone coming up a trail nearby. I saw them before they saw us, so I hollared to em'. Maddy mare, above, is Wa's best friend at the stable, residing in the stall and run next to her.
We had not ventured into this uneven footing till last week, trying to keep soft tissue from being re injured.  Nice to see someone for a change. I had not seen a soul for weeks, it seemed.
As I hand walked my mare, I made sure to make the mare walk slowly up and down any hills. She minded not, as the slower we went, the easier it was for her to choose which bites of grasses she wanted.
********************

Two weeks ago, (week 10) was the first week the mare would allow me to pick up her injured hind leg to pick her hoof. I was able to trim it early on, by pulling it forward and resting it on my Hoof Jack stand to rasp it. But, since week 2, no-go on picking it up...she'd over react and flex it till it hurt, and then she'd hop and almost fall on over. It was terrible to watch. I actually gave up on it for a week, one week. Then armed with a new plan, I filled my pocket with treats and went from leg to leg. I would stand at the leg, touch it as I said aloud, "foot". The fronts would come up, her holding them up till I took my hand off her leg. Treats for that! Onto the corresponding hind leg. The bad one, she'd lean into me and quickly pressure her rump towards me, till she was totally sideways. I had to remain calm and cool- or it was over. I pointed at her side and asked, "Step over". She'd do it, then I would go to the next leg..till I came back around and she finally decided to "cock the hoof" of the injured side off the ground. I Praised her and treated her quickly, and moved onto the next. I thought the small effort was best, since she probably couldn't really pick it up, due to the soft tissue damage.
We did that for a few weeks till she was calm enough for me to grab the hoof as she cocked it, and draw it out behind her..she didn't seem to mind that..but I had to get it, before she raised it to the hurting point. It was like building trust all over again with her.
********************
So, I was finally able to ask my barefoot trimmer out, to take off quickly the overgrown hooves and bars. It would take me too long now. My trimmer gal handled that for me, and also was successful at the injured hind as well. We were ready now..for our starting back to work!

TODAY was the DAY - starting walks under saddle . I new it would be freezing out, but at least the sunshine was peeking a little and the snow melted. I  groomed and massaged the mare. Sprayed Sore no more on her legs and back. Put her leg boots on and decided to use the faithful soft saddle, instead of  the new saddle. 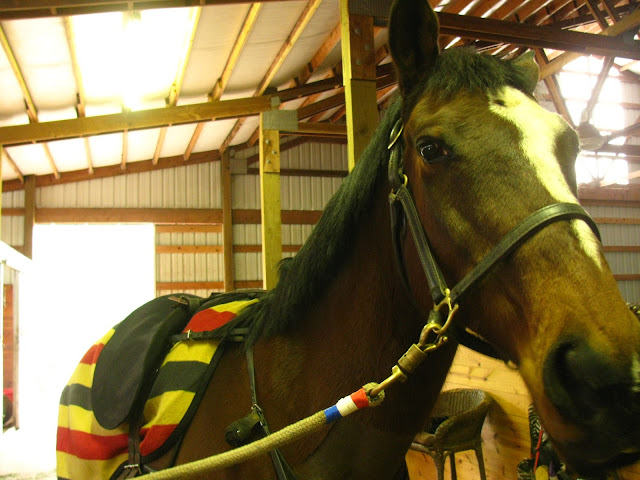 I was very proud of the mare, she didn't fidget or fuss. She kept her eye on me and seemed ready for this change of routine.
We entered the arena firstly. We walked about some, I adjusted the girth, walked over some polls then I moved the mounting block to the middle of the ring. Mounting from this 2 step is much harder than my 3 step block outside, near the trail head. But she allowed me to fling myself up and wiggle into place, without moving but one step!
She was forward and seemed willing. We did patterns and circles, straight lines and leg yields till I could tell, she was done. me too....lets get to the outdoors WA!

I mounted much easier from the 3 step block, and we were off for a short walk- up and back- on the straight trail, beyond our stable.
Her ears are so cute, totally fluffy/fuzzy! 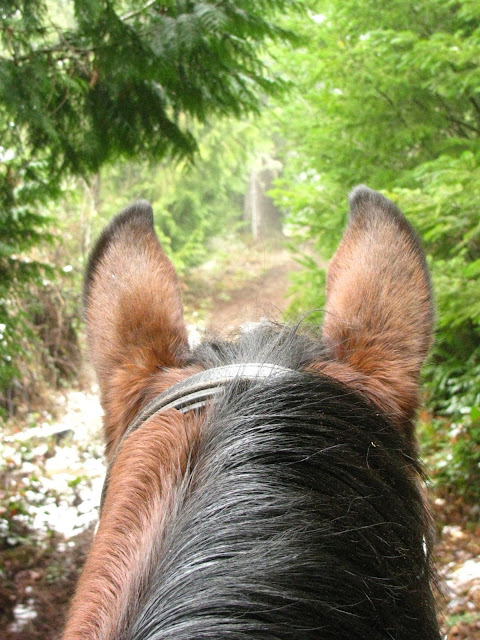 I tested the brakes some...and she has her eye and ear on me for the next move! 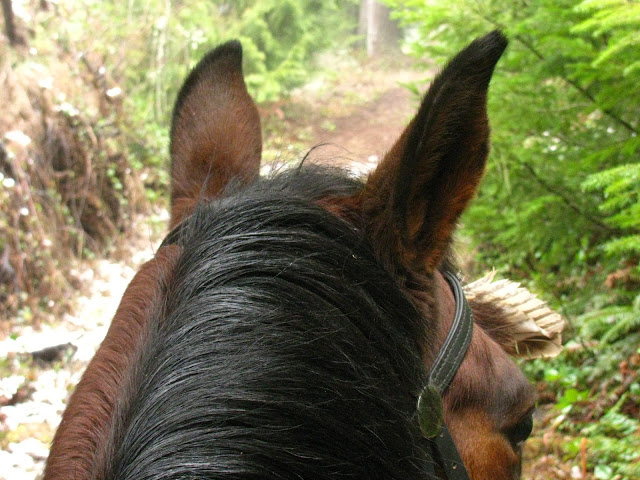 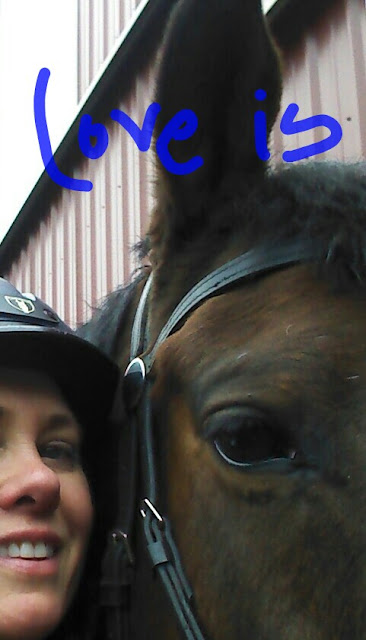 I allowed her a 15 minute graze while I put away the tack, and cleaned my messes. Her Turnout buddy Theo, was wondering why she was not out with him! 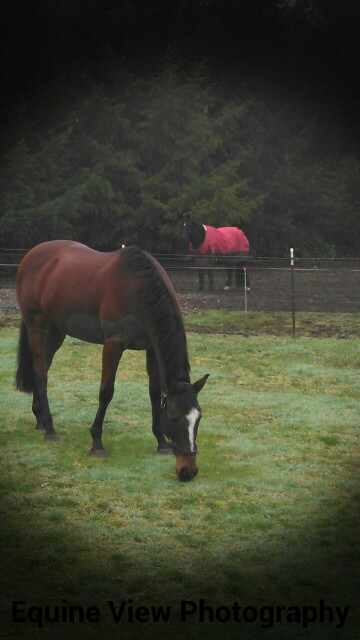 Soon Theo, she will be able to go and play with you!
Posted by allhorsestuff at Wednesday, January 16, 2013

Email ThisBlogThis!Share to TwitterShare to FacebookShare to Pinterest
Labels: First ride of 2013, recovery