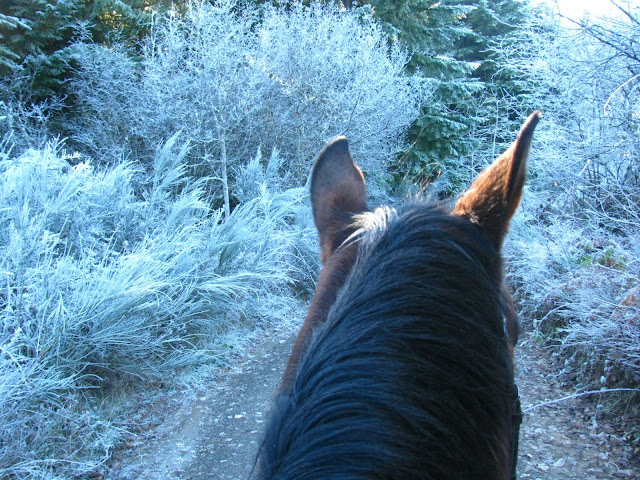 Trees in a silvery frost
Though Oregon's cold isn't as cold as the rest of the country's cold; in the single digits, ours was a record setting for this past January. I think we'd all just vaporize, if that single digit temperature stuff ever happened (or wish to)!
20's during the nights and 30's in the daytime,  for a few weeks. While it makes for a "cleaner winter" with mud frozen and such...it makes getting water to the horses harder, and sometimes driving out to the country, dicey!
We people here in the PNW were in a state of shock, at least most of us. It rarely stays that cold for very long. I am less active on those colder days, only getting to the stable and work.  It sure does make for a beauty and spender in the trees and surrounding vegetation though. 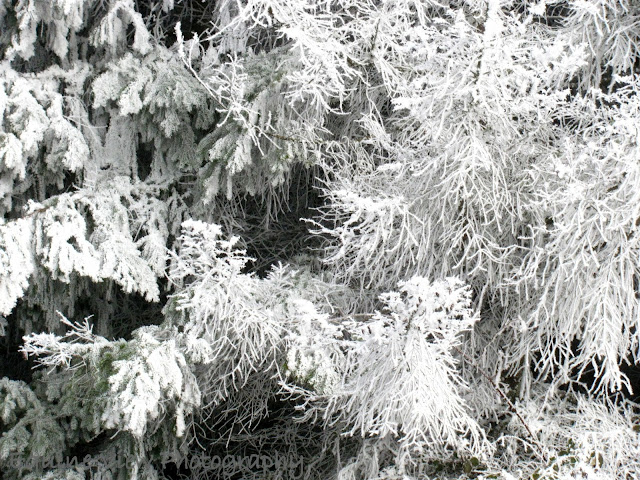 The mare was happy to see me those colder days. She longingly looked out her stall towards the back of the stable. I told her we were going out there, this cold day. It would be our 3rd ride since October. 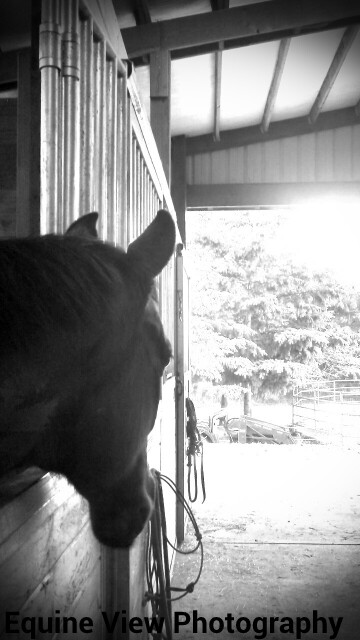 It was truly nice to get out on the open trail. The shadows of the bright white foliage and ice spots had the mare on her toes...last time we were out, it surely DID NOT look like this!! 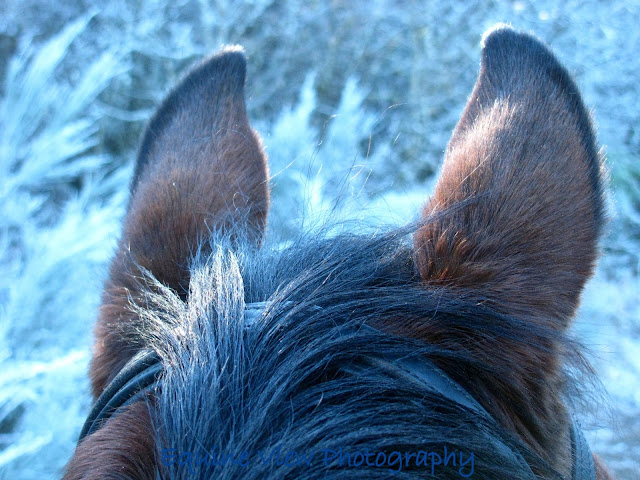 \
Coming home at sunset in the wintertime, never looked so good! The dense fog was perfectly glorious for seeing the sun rays of this frozen world. 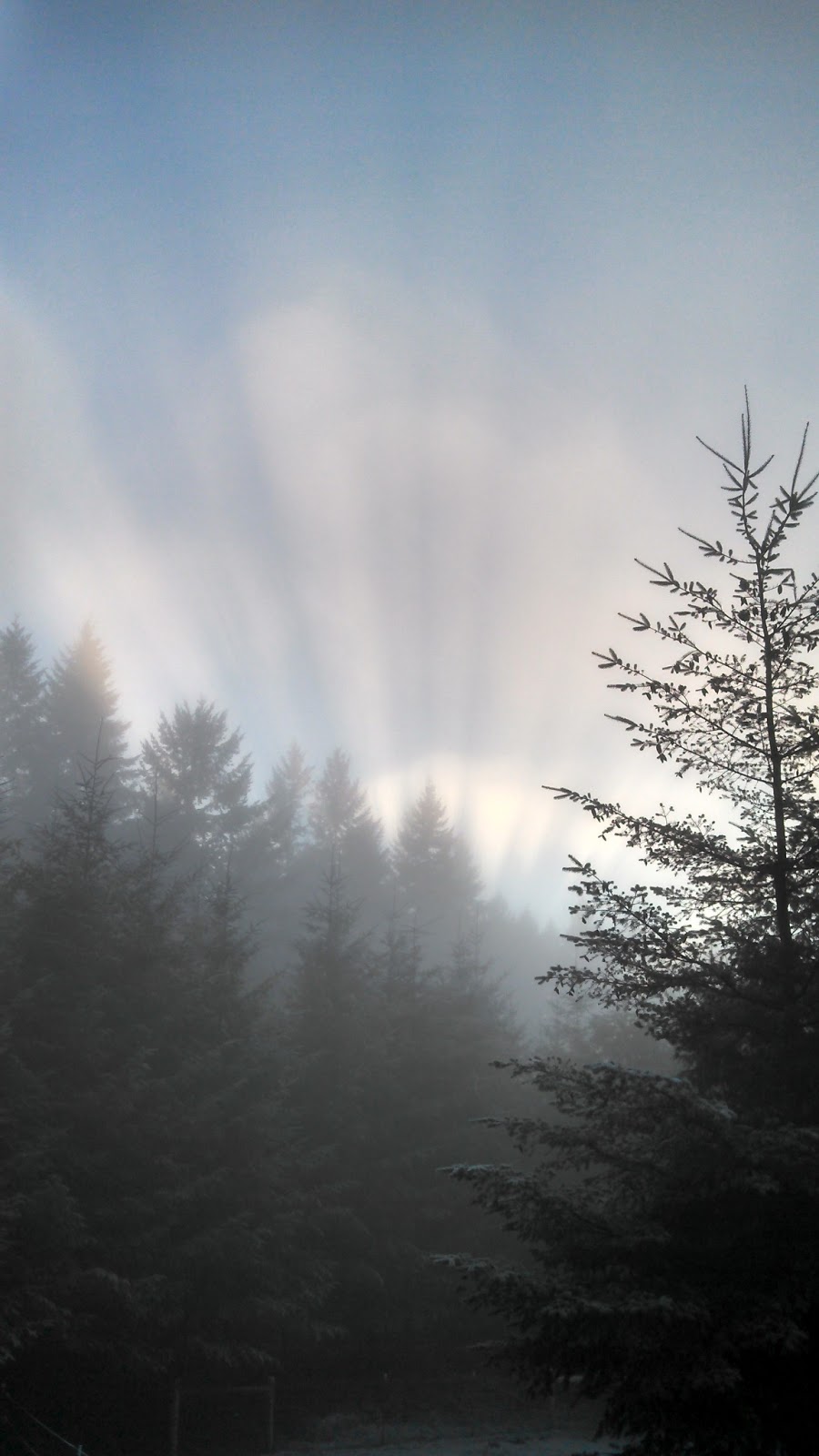 At home in the city, we have had Hummingbirds to look after here in Oregon. One would not think this would be true, that they may migrate onto warmer climates. But that said, there 2 species that will remain in our parts for the entire winter, one of which is Anna's. With the freezing temps though...the  liquid food will not thaw, if left out  all night. That would be terrible for our little visitors breakfast! So, I bring it in every night and have a "Hummer food alarm" set on my phone, to wake me 10 minutes before sunrise. Our  current resident hummer apparently is not an early riser. I am all bundled up over my P.J.'s, waiting for her to show, and she did only once at daybreak, for 2 1/2 weeks!!
In the past they have greeted us-hovering an arm's length away, as we set the feeder up for them . This one comes soon after we set the feeder up, she is quite shy, sitting atop the branches watching warily. 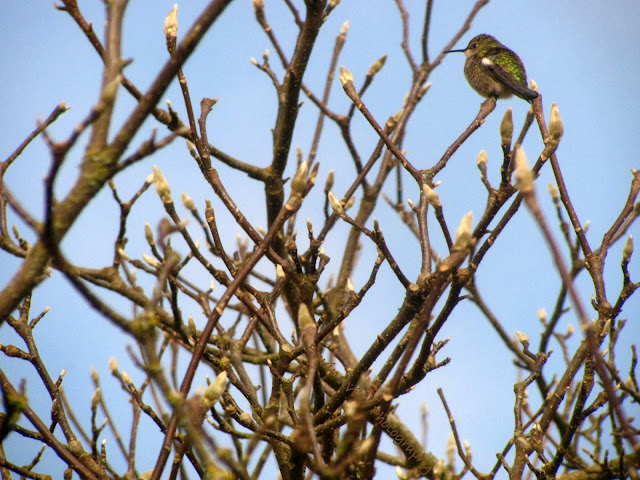 The first week back to riding with my mare was pretty cool, with the grounds hard and not slick, and the lands decked out in their finest!

Washashe was doing her best to keep cool, but she was bursting with pent up energies. I knew better than to allow her to go too long in a trot and to walk up the slick hills on foot, with her.  She has no muscle for being off so long, and trotting is easier(not better than) walking up hills. And much harder!

On our third outing, it was a dappled sunshine day. We strode along blissfully , soaking up the sunshine. I was aware of the mare's muscle atrophy and soreness in some sections of our ride. I plan on walking ,walking, walking with her for many miles and hours, to build her back up. 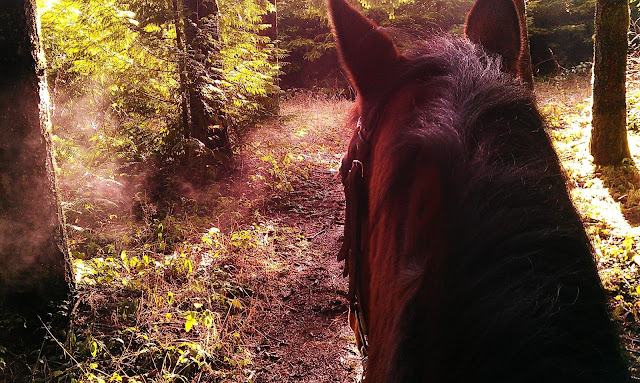 She is with this plan whole heartedly, I can tell. She has had no turn out since October and to get out of her small environment is healthy  and welcome!
We went by the lower ponds to find them frozen somewhat. It made them look glass like, and pretty. 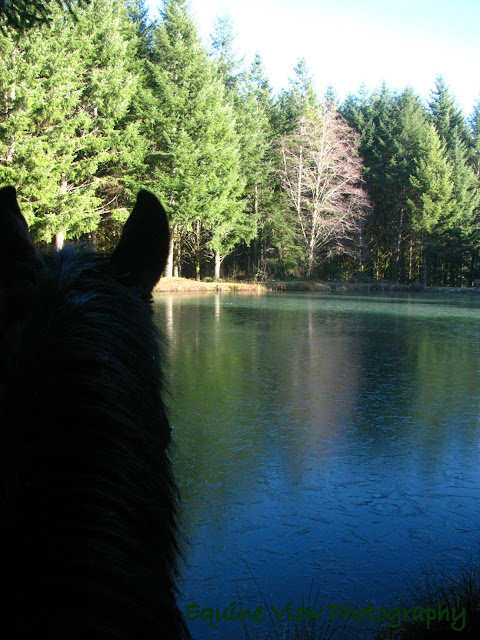 Another day , it was a foggy wonderland...making the roads look unending and mysterious~ the mare a little bit pensive for what lay ahead. 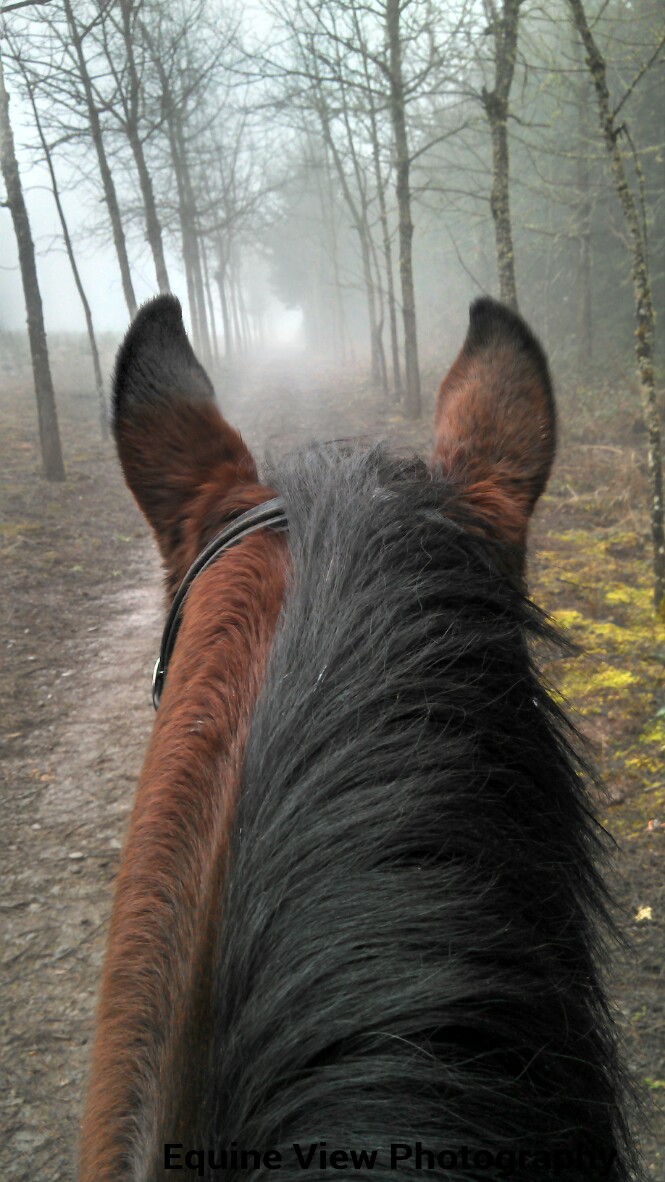 All in all the rehab has been good, though the hock has never returned to normal. It remains puffy, and also hard in some sections. There is no apparent heat or pain now. I try to do all that I can with massage, cold applications and micro current, stretching exercises and give her supplements that help ligaments and joints.
Her gait has been super strong, and she does tell me though, when she has had enough of any one thing. 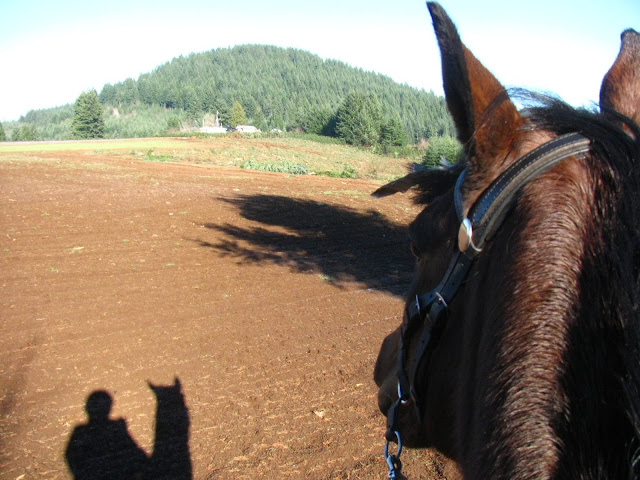 We both heaved out a large, contented sigh, the mare and me....we made it up the long, slick hill coming home . I walk this coming and going for now, while the conditions are quite slick. The mare walks nicely, while I hold to the  stirrup leather, near the bar.

Home again near sunset. The sun rays sliding gently down  through the trees, as they do, before hiding behind the earth altogether. This frozen earth went easy on us, for the first ride times out. 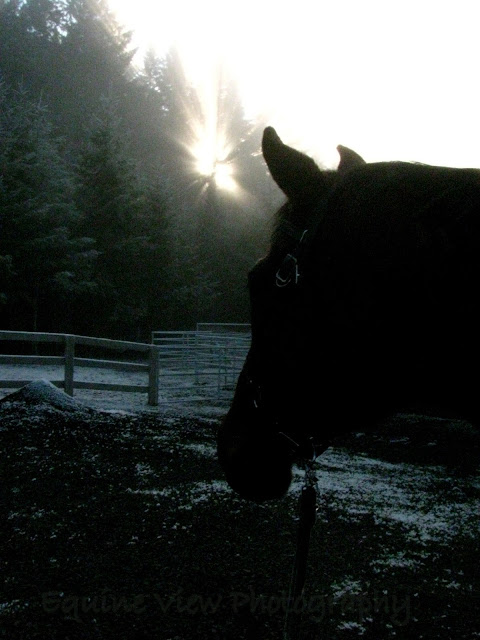 Now, as the world thaws out, and the sunlight begins to brighten the lengthening days and certainly~ spirits~ our mission is to
BE OUT IN IT!

Posted by allhorsestuff at Sunday, February 03, 2013