D'apple teaches me a lesson 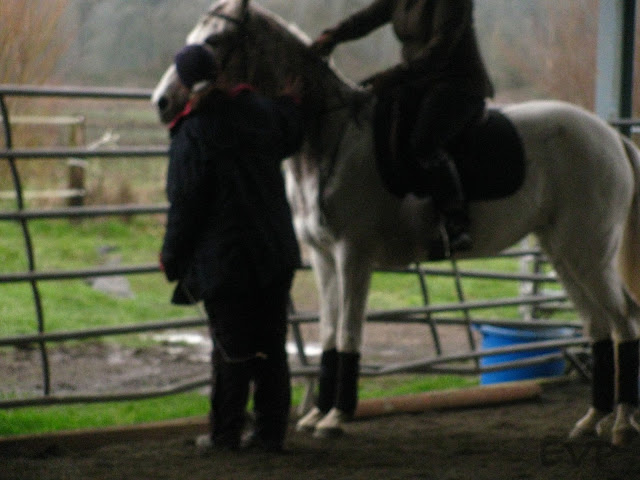 The lesson with D'apple last Sunday was amazing...for the both of us. While she was quite pensive and scared for some of it, like above, she quickly figured out how to relax, as our instructor soothed and refocused us.

Let me start from the beginning now.
For those who are unaware of who D'apple horse is: THIS POST tells a wee little bit. My middle sister is a humane investigator and was responsible, with her county team, for seizure and then the adoption of near 17 horses almost 2 years ago. D'apple is the last horse to be adopted. Her wounds were so extensive, she needed to be healed. As both my sisters have attended to her, since her removal from the abusive owner, they fell in love with her. So here we are today. She was quite gangly looking, when she came to live with my sister at Pantz's barn, and that was almost 100% better than when she was removed. No tail or mane, open wounds and no skin on many parts of her. She re cooperated in a large open field farm with some cows, and eventually another horse. She stayed far away form the horse, as she is very timid and that was part of her abuse, she was in with a herd that ran her around and constantly bit and kicked her. She is low horse, on any herds list.

We have discovered though she may have been ridden before, she has NO training. She is quick to learn and willing. If she balks, it is from not understanding or mental overload. My sissy has taken great care in not making too much an issue with any one thing, but being gentle and consistent with this sweet mare. She has huge distrust issues, but is not outwardly aggressive about protecting herself. She just gets rigid and holds her breath. So all is done around her slow and methodically, for her to gain trust towards you. Once you have gained the trust in one area, say, pick up her feet with out her slamming them down...it may not transfer over to the trimmer, my sister found out! Everyone must prove their "safe worth" to her.

She truly is a love of a mare and I am so pleased to be apart of her world.
***************************************
Onto the lesson's she has been teaching me.
Sorry about the poor quality of the photo's below. They are actually stills taken from one of 2 videos my sister took, while I rode. The videos are really good, and perfectly timed for the great moments of "AHA" for me, but I  am still working with (cussing out and fuming at) my computer to allow me to upload them. Untill that day, these stills will have to do. 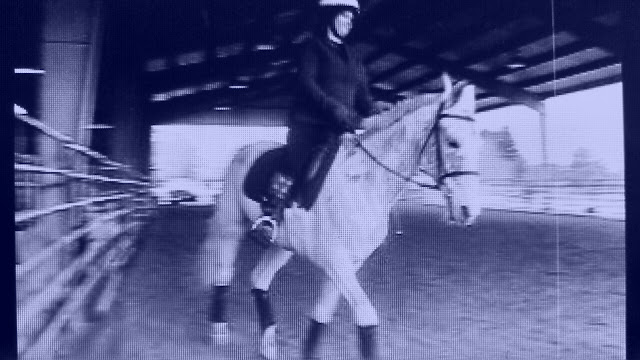 After a wild trotting session, D'ap starts to relax

D'apple reminded us that she has not been exposed to many things. From her hoof slamming, as you tried to pick her feet up, to jetting across the arena because something touched her while you were riding. While lessons were being given, she let us know that she was aware of the difference in the barn. Activities,  horses, people everywhere,  and that loudly speaking woman inside the arena with some of the horses. She snorted, as we finished tacking her up for the lesson. Her way of saying, "she was wary of things". My sister highly recommended that I connect with her through walking about the barn and then onto the arena. I was asking her to turn sometimes or slow her walk and halt sometimes. She is very good at this, and we did connect to the point where I felt confident to mount.
She sometimes takes to looking like a rocket ready for exploding, if you use the 3 tier mounting block, so I chose the 2 step, and sister held the offside stirrup for less pressure on D'ap's withers, as I mounted.

Now this is the FIRST LESSON D'ap (re)taught me:
(first 30 seconds)
ONLY APPROVED PEOPLE ARE ALLOWED TO BE INSIDE MY CIRCLE OF COMFORT!

She quickly said, "there is someone else in the arena -unproven person she added- not to be trusted!"  I failed to introduce the mare to our trusted trainer "C"!
After I mounted and we only walked but a few steps, she leapt forward in a trot-AWAY FROM- the unproven person!

SECOND LESSON (in less than a minute) BREATHING IS GOOD AND NON REACTION IN A NEGATIVE WAY-TO A HORSE SETTING THE PACE.

I was being praised by "C" in the fact I was not reacting by being frantic or grabby. I was trying to slow the pace, and not fight with her at all. I learned how to keep up with her and then, slow her down by gentle half halts and  a slower posting rhythm. By the way, it is very hard to keep at because you get behind the horse as they ignore your pace, with their head in the air- and persist in theirs!
But, we did come to a halt finally, and Da'p allowed "C" to approach. I handed her some peppermints from my side breech pocket, and all became right with the world as she became a friendly, treat bearing person.

We began again.Walking this time! 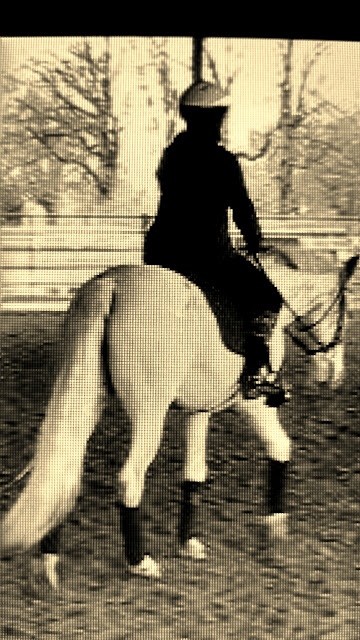 Using a pulsating leg pressure, we did turns.

The rest is all I learned from the D'ap, in her gentle but persistent manner of going.(towards the gate out please!)

I have taken so many lessons from so many folks, including my sister, but until you understand something said , you just don't. Of course people say, "Keep the horse in front of you and between your reins"....My brain has always told me to sit back a little and keep a forward horse. Of course the horse is between the reins! Well, maybe not!  D'ap, wanting to slide this way and that way, towards the other end of the arena usually,  or away from the semi -trusted person speaking loudly in her large arena sized circle of comfort taught me that: if there is a slack in the rein evenness or contact or the wrong bend, The horse is NOT between the reins, but on one.
I have had this fear of contact due to my mare reacting so violently with it, that I have "Given away" my contact in the arena. I have thought that if the horse is heavy in your hands you should give more... 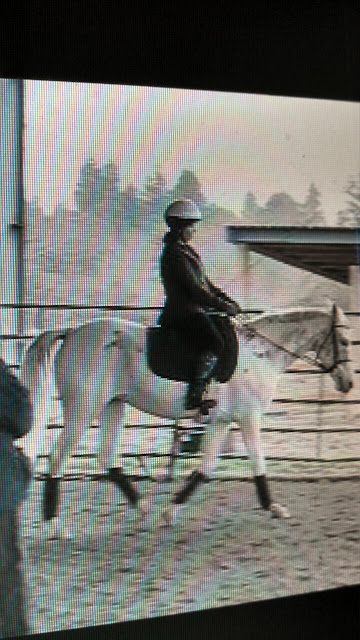 While D'ap is FAR FROM being heavy in my hands, when I felt her take a hold on my hands, I gave and my elbows became straight. The trainer mimicked me as I did so! 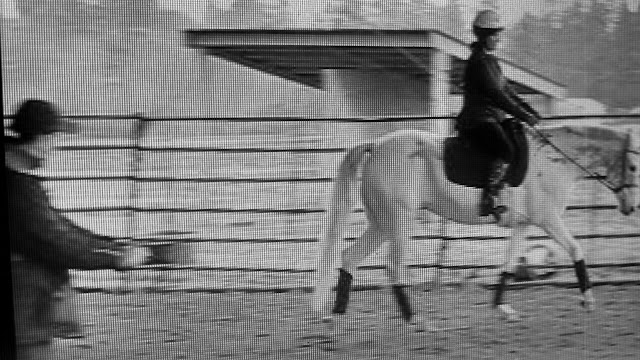 She taught me to remain where I was, so D'ap could "Find me there". It really was an "AHA" moment for me because that mean't sometimes, shortening my reins ( OH NO!).
I have never wanted to be a hard handed rider, but that kind is truly different than the one I need to be for D'ap and my mare. I have no problem with a light feel, but the "being there". It is the door to many good things ahead. Like turning...we had many mishaps with turning. When I allowed the reins to be slack, and the horse lost it's direction as my outside rein lost contact..of course, the body is the true indicator for this as well..but D'ap has no muscle and her rear end, and is not quite able to respond well yet. So her rein framework is totally needed, as I turn my torso and vision the direction we are to travel.

It got so much better after I began to "BE THERE" for her!
I also loved the fact that I was not being told to correct my leg, but she did say, once or twice, she liked my constant and soft leg. 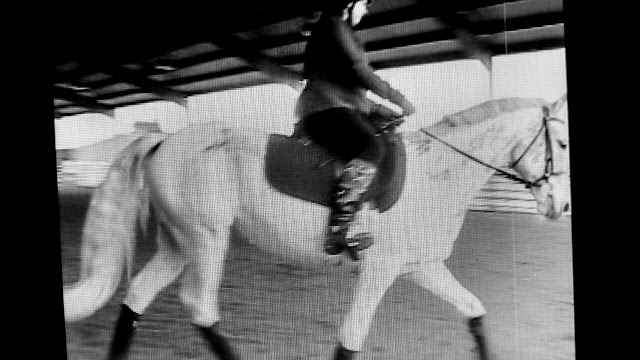 D'apple is someone I can trust to tell me things about my riding, with out making a big fuss over it, if I am wrong. Sometimes she messed up and down with her head, but I minded not and was told to carry on "being there for her" as I did, and allow her to keep moving forward. It is reciprocity, this non fuss riding. I allow her to
experiment with where she is and is going, and she does the same for me. We are forgiving of each other.
I adore this mare.
At one point, she had had enough...she was not tired physically so, but her BRAIN WAS ! She stopped by the gate and I was unable to get her to move. I did not fuss, but waited for trainer "C" to come over. She had me rub lightly upon her side, with my leg feeling how rock hard it was. She began to rub it lightly with her hand and the end of a Dressage ornament. D'ap became soft again, and she had me rub her slightly again...OH! Her skin moved with my touch this time and she also stepped over!
We did that once more and she began to say, "Now hop off"- but I was in mid hop already!

Love this mare and hope to ride again soon with her, maybe tomorrow eve. And maybe even in another lesson! 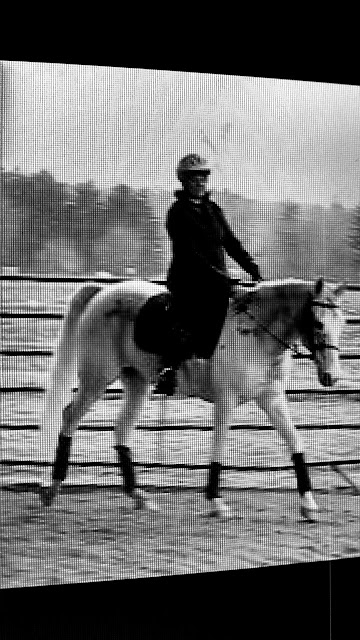 Posted by allhorsestuff at Thursday, February 14, 2013