Weekend ride with the barn girls... WINDY-WINDY!!
My stable mate from "Equinemine" blog. Maddy and she, looking on. 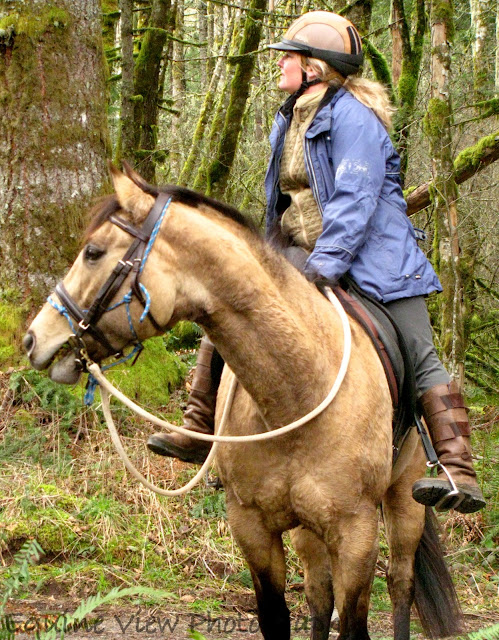 This was my stable mate's "Maiden Voyage" with her new trailer and her Maddy mare. She also was trailering another from the stable. I know she was nervous...I was when I first started too...and sometimes now I still can be, wanting for all to go smoothly.
I waited to load mine up till they had theirs inside safely...
It took just a few minutes for the girls to allow the two horses a peek inside and then ask them to go all the way inside. I was so happy they both really trusted their human partners to go ahead into this new -BIG- white box!
Then I went ahead and loaded up mine too, in our rig waiting nearby, with the door, invitingly open.
Wa mare hates to ride alone and she frets and weaves, so I prefer to not have her in there just idle...it rocks the whole rig! I prefer to trailer her with someone in the front spot, but this day, we needed to go it alone. I think the two larger warmblooded horses in the stable, are TOO large for my slant load trailer. So we may be traveling alone alot this summer. If I could have been at the stable the day before, I would have dosed her up on the "DAILY CALM" herbs in the night before grain, and the morning of as well. It seems to help alot with the "edge" of her nervousness.
BUT.... I was at the local TACK SWAP SALE..it is the largest in our area and I'm on the quest to raise enough money to get my new ANSUR Saddle- on time.
I have a trip planned for late MAY and seriously-don't wish to be riding bareback for it!!!
(More on the sale later)
We had three trailers and 4 horses going out this trip. I showed them where to park..as this area was my stomping grounds for the past 2 years. It was, like I said -WINDY as heck- and my mare was coming into season on top of that...so she was in rare form..and having a group of horses is NOT my preferred riding habit. She is so competitive, and quickly  today, she had her adrenaline up. I knew I'd go first and she is an angel TRAILBOSSHOSS  for that position..head low, neck longer, ears perked forward and attentive to where we are going, ..striding out. She usually sets  such a walk pace, others have to trot to keep up.

This trip was to condition on the non muddy, firmer roads. Skye, I call him the "Big Skye", is recovered well from the Tendon injury of last fall..now needs to build up muscles and stamina, as most our horses do, after a minimal wintertime schedule of riding. We were getting tacked up and Julie said..I forgot my girth! Well, since I just went through all my tack and considered, but did not sell my "Wintec Dressage girth"- it was in the trailer! YEA, otherwise two of us would be riding bareback!(her more so than me)We got going. 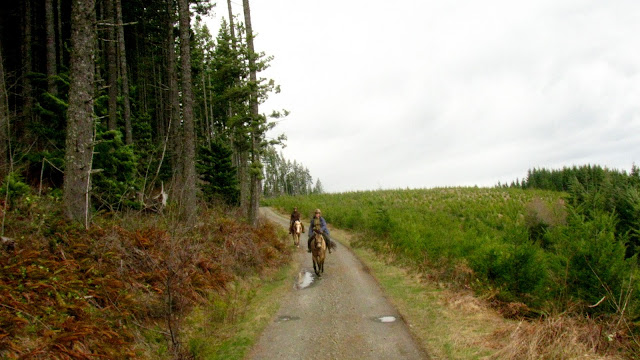 We started out with 4 horses...but our stable owner dropped out and went on home. The roads are service roads to Forest lands. They have gravel surfaces and with our areas soft soils...harder hooves to take the rocks are not easily found. Even Mustang Cazi I ride..who has hooves of steel...gets sore about this time of year, being in and around muddy paddocks.
Her Paint Willow, had all four boots on, like Wa mare did too..but hers  began to twist and she KNEW WHAT THAT MEANT..a pain in the rear..having to get off and adjsut. NOPE, she called it a good trailering day, and went home to ride our" mostly" rock free lands near the stable.
Us girls rode on into the WINDs of MARCH...not too aweful bad as a LION..but more like a Lioness. Sometimes we'd get a nice break in the trees, like this. Bothe Maddy mare and Big Skye were tenderfooted, having only front shoes on, they sought the sides of the road, over the middle. 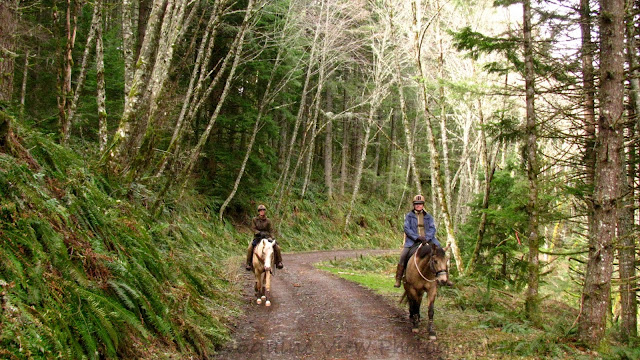 We only rode out about an hours time, their horses were not in shape to go on further so we all turned around. My mare had a FIT thinking she'd have to be in back and leaped forward, as she does, a little too close to Maddy. My stable mate offered to help with training, weaving in and out and circling...but I was already beat being bareback, and-after the previous days 5 hour tack  sale-a-thon, on concrete.... I wanted to..but I have to be in better condition mentally and physically, to outlast my mare with  patience and calm. I also must pretalk the ride with others...I feel as though I put others off..if they must babysit the High strung mare-o-mine.
It's easier just going in front or Solo. Washashe does not give in easily and I end up alone most times, either ahead, or sooo far behind that she sees other horses-NOT- to have a walking calm mare. It'as teadious and sometimes stressful/ dangerious..according to where on the trail or road we are.
After 4  years of trying...I'm not too sure  it's worth it, to get all the TB out of her-is that possible? (ha, kidding)
I do have 4 other riding partners that have gone the distance with me,  these past 2 years..the mare is  willing to be in front or back and trade off with them...but it did take time in-each ride to make sure she remained relaxed.

We adventured a bit on the way back. There are two properties for sale in these deep woods. My stable mate went up to one of the houses and barns to check it out~ 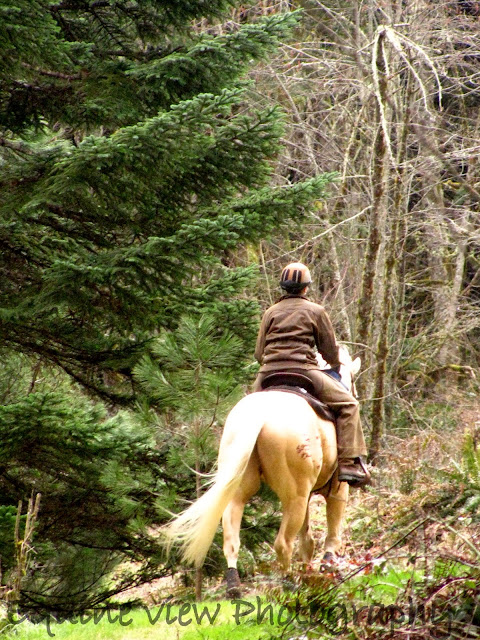 Up and back down, she and Big Skye went 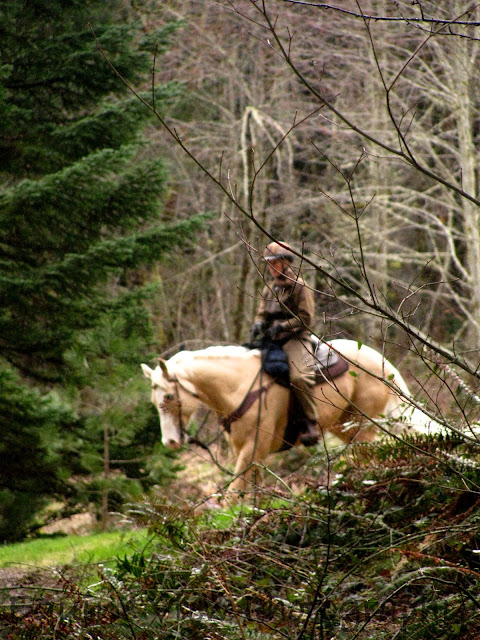 At one point, I knew I wanted to allow the mare to stretch her legs..so I got clearance to go. We then flew off..what a nice gallop we had! She soon realised though...the other horses were NOT behind us! She neighed and neighed...she rarely does this, but these are "her horses". I got to one of the forest land gates and heard a weird noise..it was a truck driving up...humm...the other gals soon arrived too...and we all looked at these intruders, to our quiet ride day.
EARLY for a beer I thought! 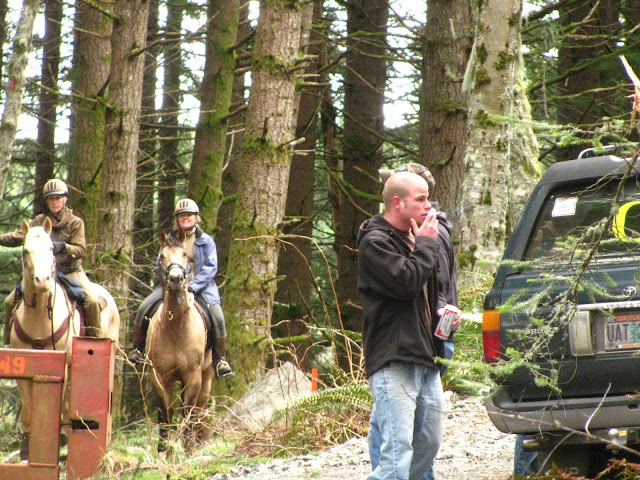 They soon were around the gate and I was decidedly hand walking now...we'd try this behind them to start with, I thought. Wa did alright with many "half halts" in my walking, she payed attention and did not rush -oo much. I forgot to put my blue plastic bag in my saddle bags..it helps with her keeping a distance when I put it behind my back..she can be so trying sometimes..I use any help i can get to refocus her competitive nature. 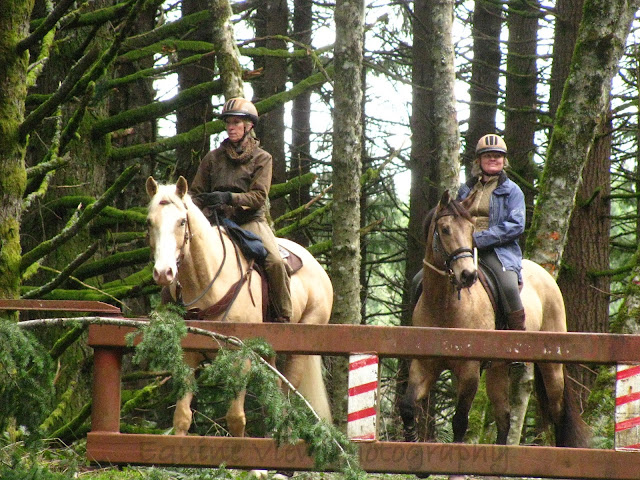 Once back at the trailers, the nice, calm  loading ritual began..I loaded my Washashe mare  and then they soon loaded Maddy & Big Skye. Uneventful and reassuring for the future. 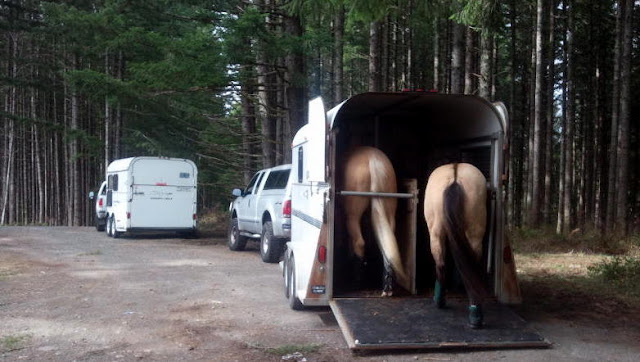 The  Maiden Voyage for Julie was a success! 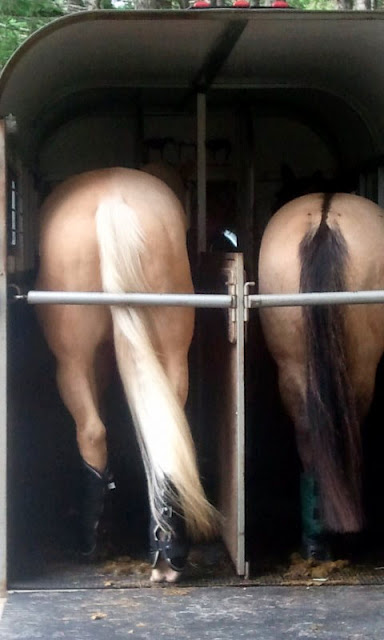 The END
Posted by allhorsestuff at Tuesday, March 22, 2011