Serene, calm and willing, the mare had been last 3 times out. I was enjoying the run on peaceful rides!

Starting the descent of the first hill  to the main road...she stopped and searched the horizon. She is keenly perceptive to her surroundings and tells me about any and all changes to them. 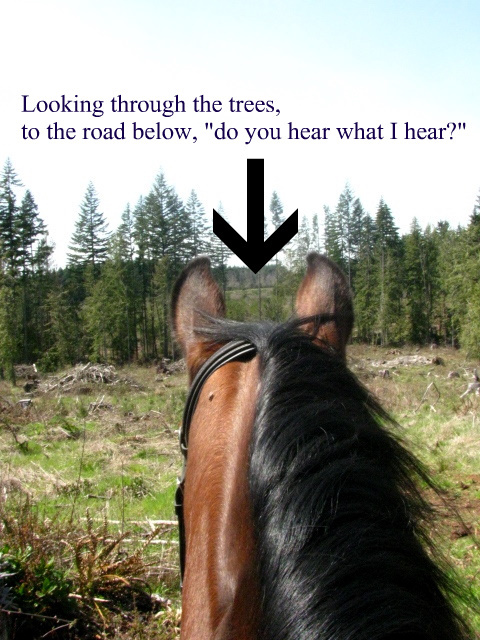 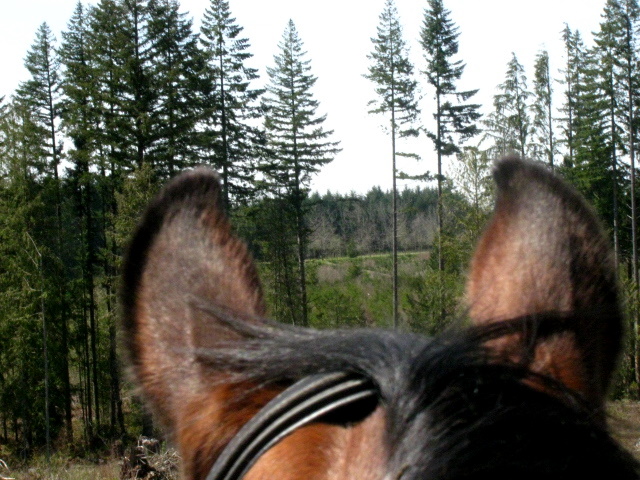 ...and looking harder and longer....but no one was appearing to us-yet. 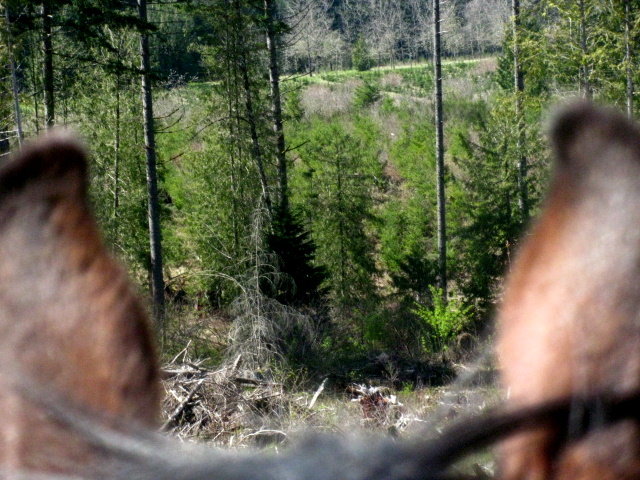 Once we made it down the long hill to the bottom and started up the road...yuppers there they came, two riders. I usually initiate the yield process myself, as sometimes if I wait, other riders THINK they may pass us closely. These types do not have a "personal space" challenged mare  I do .
A NOPE! Did that once, and won't again. We took a step or two off on the side and waited for them to come along by. As they did, we all exchanged our  happy riding smiles and greetings.
Washashe  then chose the Forest trail to the the upper pond area, as it has the softest footing and gets her off the graveled road.
Happy Springtime mare she was! 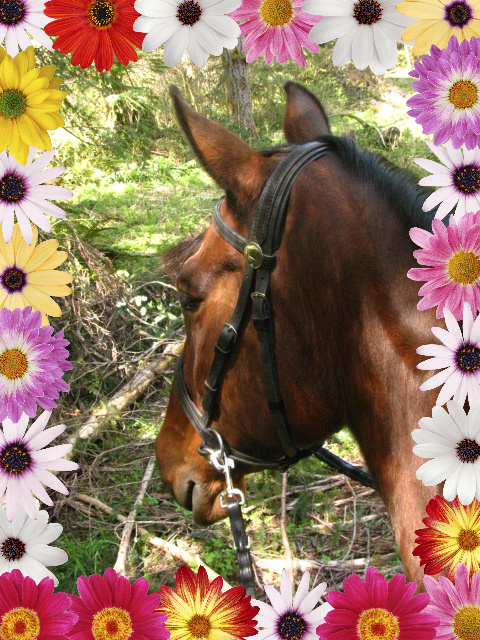 I had her front "Cavallo" hoof boots on, as she really has been the tender foot from the slogged, muddy grounds. She seemed to appreciate them this day...though I did detect some hesitancy, going down hills.
We traversed the upper pond trails for a time, then came around one to find some fishermen enjoying this first sunny day. We  all were lazily doing our best to not wince for the brightness of the UFO in the sky! 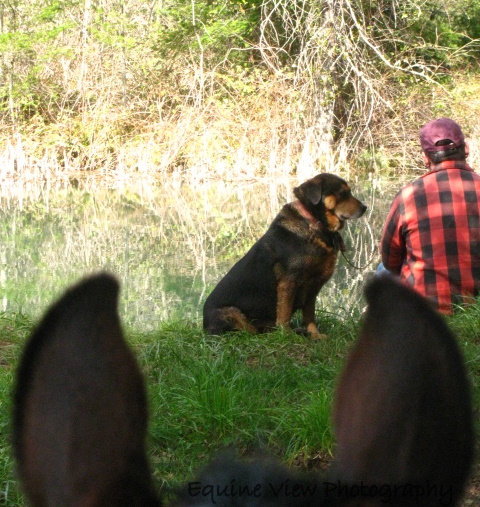 I loved how they happily sat upon the banks of the pond, instead of  the benches that are there for use. It was perfect. 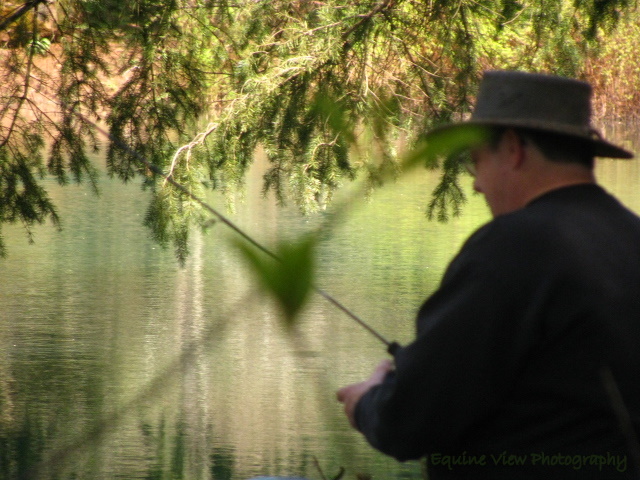 Though the small docks and benches always look so inviting to me, the simplicity of these two friends sitting on the bank in the cool grasses near the dreamy waters edge, was absolutely storybook! And with "man's best friend" too. 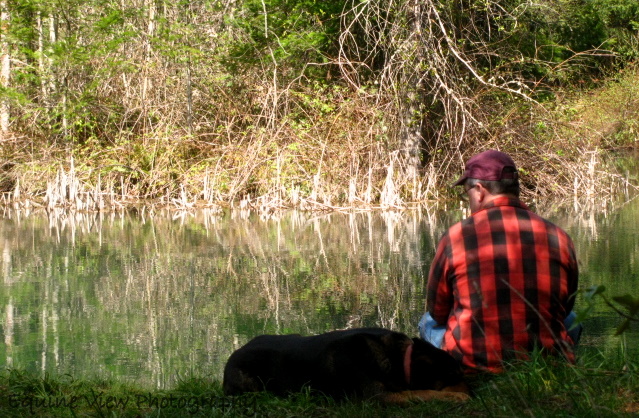 We exchanged happy, sun shining  greetings of how the day was made for fishing and horseback riding. Then the mare and I were off~
We made our way up another road, passing nearby the Cattle farm with Alpacas and the cute white donkey. I have been letting her stop to investigate each time, and she has had less pensive thoughts when I ask her to turn up that way now. I usually allow her to trot or canter up the small hill after we pass them...it is her reward.  She really canters in a long frame on this particular hill...it feels really neat as I roll with her gait and push lower body towards her mane as she flys with me.
It was about the most perfect day, this one actually being sunny.
We were on the way homeward and I spotted the two riders from the beginning of the ride, coming up the paved road. I went past the last pond and down to the roadway...we were approaching each other, and my mare just started to dance then-BOLTED forward in a canter! OH! They looked on with horror at this gal riding bit less and bareback(padded) -flew by....I had a rough time stopping her since I had the reins on the rings of the nose band and not under the chin.  We did stop though, and I looked back to see them still looking on in horror and calling to me, "Are you going to be alright??!!" I sheepishly called back, "YES, and we are coming back to try that again- calmly so!" They did not wait around for that!
SHE LOST IT..the mare..she totally lost it, for some reason! I was really embarrassed too. I am sure stories were told that night, at their barn.
We did go back and we did a do-over  ride. But it was the other horses that sparked her..and they were now gone. I had changed the bit less to it's normal stance-  but now - with that frenzied stunt, she has also LOST HER PRIVILEGE of bit less for a time.
I arrived home to tell the tale to my friend Joni...her having come off her Big Skye previously. I had begun taking off my personal gear and horse tack when she and a friend walked up. As I told the story of me being embarrassed about these folks seeing that I was bit less, saddle less and out of control...and the friend of Joni's pipped up and added ,"And helmet less!!"
HA HA -Joni and I just laughed, as I showed her the helmet I had just taken off, along with the verbal out loud factoid of -"after what happened with our mutual riding partner here, you think I'd be riding without one!" Now that would be embarrassingly- stupid!
So, as I took off my bareback saddle, Joni asked if she may put it upon her horse, so she could get back on him in the arena this day.
I was happy to see her back on the horse! 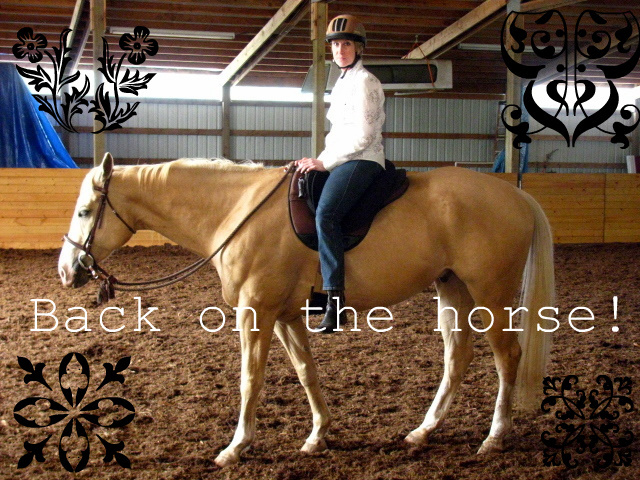 Well, so now I will ride with my Waterford bit. It seems to be the least offensive to my mare's tiny palate and huge tongue. It is simply rounded links on a  D ring. They are used for cross country riding, if a horse likes to grab the straight bar bit and go (kinda like what she did do). I got it for the beach rides when she is more likely to want to grab and go like that, in the wide open spaces.  She salivates nicely with it and has not told me it bothers her. 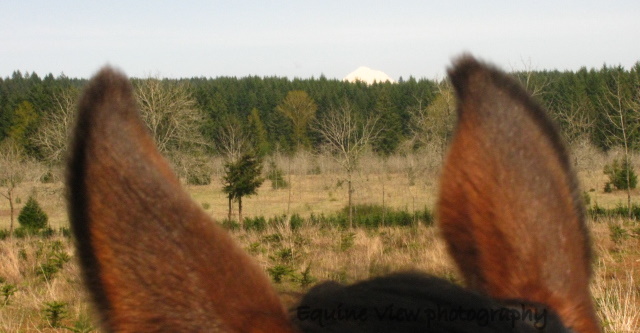 We saw something new, our very own peek view of Mount Hood...and also something NEW cropped up in our riding as well.
Ya know, nothing EVER stays the same!
Posted by allhorsestuff at Tuesday, May 10, 2011