Have you ever thought about the ways you and your horse may resemble each other? 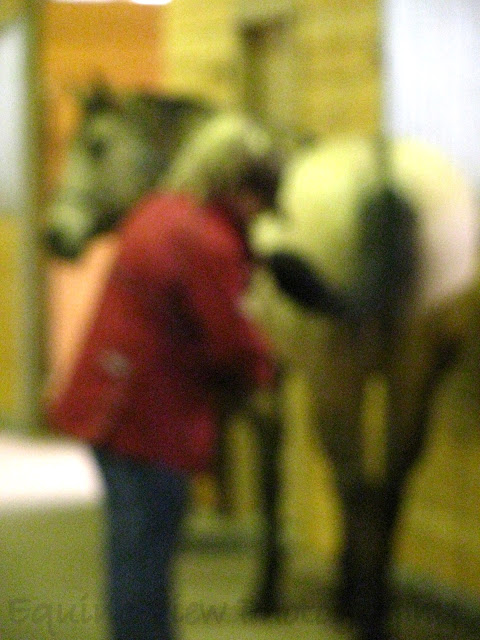 Now that may be an -out of focus- concept to some, but to others, and they may not admit to this, have definitely thought, "why yes, my steed and myself- we share many (or none) similarities." 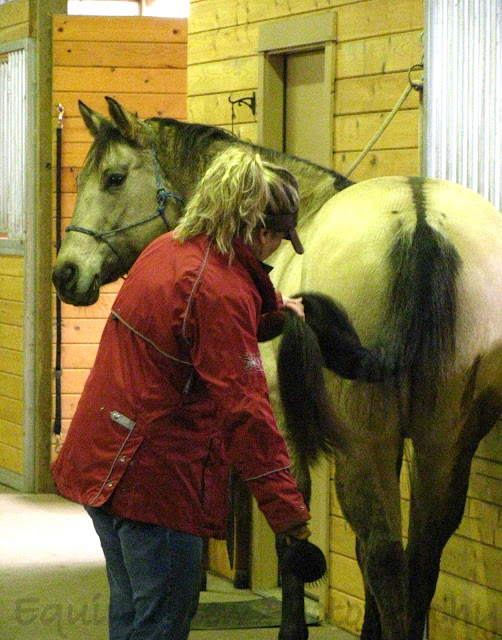 These two are such a great team at my stable. They obviously share the fair haired, physical likeness. Behind the scenes, to me, they share a deep thinking, sensitive- quick to adjust nature, after a cautious consideration period.
Of course, this is not based on any study or scientific-anything- just my perceptions as  I spend time with /around people and their horses.
﻿
I recently watched these two, doing  ground work at a clinic at my stable. It was neat to see how watchful, alert and willing this mare was, trying very hard to understand what was being asked of her.  A trait, I've noticed,  she shares with her girl.
How many (funny, annoying, amazing or otherwise) ways do you line up or resemble  your horse??
Just one (for now)  of the ways I resemble my mare is:  the knack of putting off nature's call ...till...you finally, just have to stop and go!!!
This has been tried and true, proven over and over again through the years I have had my mare. The most HILARIOUS TIMES that could have won us the $10,000. prize money on "America's Funniest Videos" was  in a boarding facility not long after she came to me. We'd go out riding for several hours at a time, nothing unusual there...but when we went with male riders..I did not feel comfortable answering nature's call in the woods, so I would wait till we got back to the stable. I  then would immediately go to the outhouse.
I knew I would have to do this at this barn so I taught her to stand patiently so for me by the outhouse door. She would receive treats, if she stood close. She never once pulled me from the outhouse, before it was time!! The small, tall box like container I went into became a nice break for her, as we rode the arena at that stable.
The first time we could have won the prise money was the most hilarious....
We  returned  from riding several hours, trip on down the lane between arena building and hay house to the "Outhouse"... you know the rest -except-!!! My mare went at the same time!!! Yea! I was laughing inside the outhouse, knowing what was happening! It not only occurred that once, but nearly every time I came back and did the routine from rides. Too funny! I really should have had someone try to video!
So now,  knowing she has the knack of waiting and putting off, and it can make a ride tense,  so I whistle for her to go, having taught her to do so. She normally "goes" when she sees me arrive at the stable...it's habit now. BUT-she sometimes waits for the return from a ride...like this, just the other day;
I put her in her stall with the cooler on, to wick the moisture from her back.  Wa mare walked outside to see where her horse friends were. She then came inside for a bite of hay and outside again..... and started to come on back ....but before she stepped upon the  matted porch area, she suddenly stopped- and spread em!
OH YEA...FORGOT, I have to STOP for a second, and do this!! 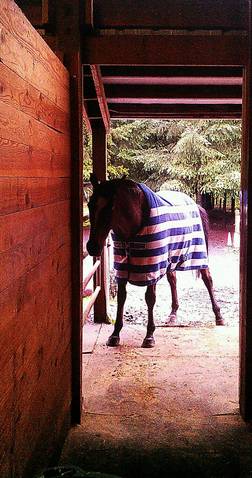 Yesterday, thinking about this concept of resembling one's steed, I asked another riding partner if she thought there was a way she resembled her steed...she seemed taken aback by the thought. She only thought of her steed's attitude towards certain aspects of life...he gets grumpy and angry. She did not see herself like that. And that is not what I mean either...they are NOT US- and we ARE NOT THEM!
Having been around this gal, I've noticed that she is- calm, easy going, meted and measured. To me,  her steed is JUST like that...not overtly active, not very distracted with much other than the details of direct concern (food , comfort, safety) .
And even when something comes up, he seems to decide to remain calm. He is the perfect riding horse  partner for my mare and me. If we wish to walk by him on the trail, he may not walk up and keep up ; he is not competitive,  and would rather take second spot behind. Likewise, this gal is one that likes to go with the flow and be at peace.
Though yesterday, he was able to ride next to us for short times, and  it was nice to look at her as we talked, for a change!

I really am not ANTHROPOMORPHIIZING...it's something I have noticed, I don't go looking for the similarities, they appear.
I'm just sayin!
Posted by allhorsestuff at Saturday, December 03, 2011