The signs of spring are all about, and we here in the PNW have thoroughly enjoyed the light and warmth of it all!  At home, even our cats are enjoying what it brings! 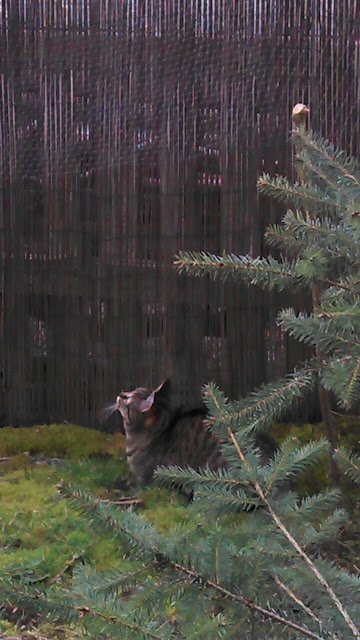 Glory B our rescue kitty, stares at a springtime visitor..... 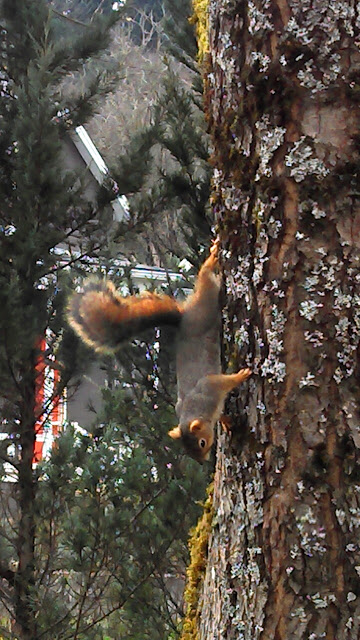 And he stares right back at her! 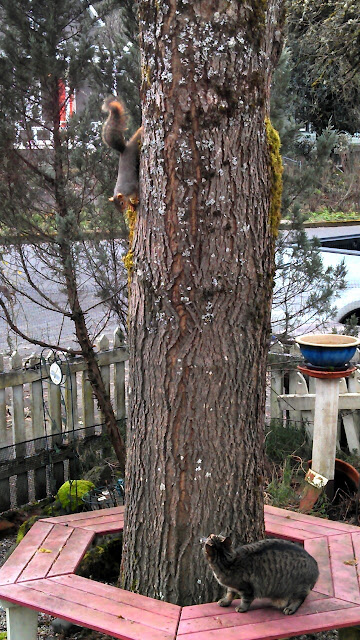 Fortunately, he stayed up there and she stayed down. It did not amount to anything but a -frozen in place- staring contest.

While the first week of springtime was quite  stormy-volatile, we made the best of it at the stable by doing extra grooming, working in hand and over poles in the arena.    After one grooming session, a stablemate noticed the cool hair formations right off the "Grooma" massage tool.  The large faced rubberized brush, doubles as a nice shedding implement!  I took a sample home and put them on a plate.
Here is one of the "WA"ffles Teehehe!! 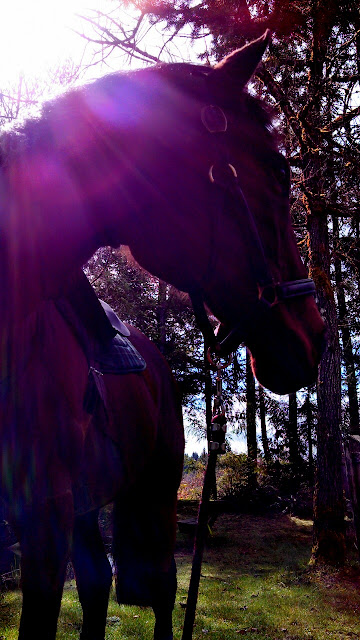 The mare takes in the sights around her, as the light makes everything worth taking second glances.

We had one particular outing last week in which I wish I had a video of the event that occurred!  I am calling the mare my
"OnTrailTB", after we finished,  a sort of race.

We were doing some trotting about the trails, as they had nicely dried, making secure footing, for some speed. 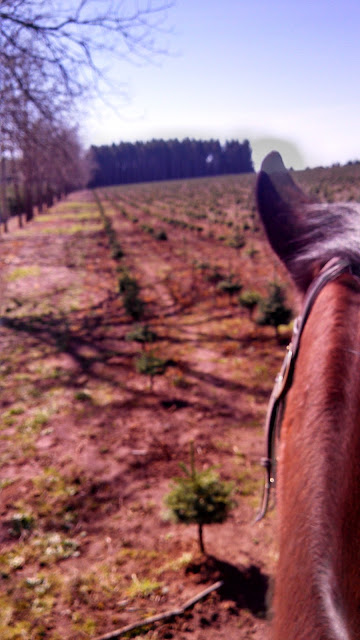 We  trotted down a long road away from home, then up the hill towards another  LONG stretch of grounds. Being between the rows of evergreen plantings,  it is very soft footing without rocks.  There so happens to be a nice road as well,  just to the left, on the other side of the larger row of deciduous trees.

We had already seen a couple fat bunny rabbits and the token Jack Rabbit that lives in those trees. He with his longer ears and legs, could reach nearly 3 foot tall, should he stand all the way upright!!  Appearing for a second, he  ducked into his private forest once we began up the lane trotting.
While I was asking the mare for transitions from longer to shorter...all of a sudden...a Plump grey squirrel (the size of a small dog) popped out of the trees onto the road to the left of the mare and me.  He decided to run straight up that road, paralleled to us. We soon joined him, as we continued trotting.  While I was not racing him, we did gain in trotting speed with my attention not focused entirely upon the mare.
HAHA!!
I was laughing out loud, as this rather large squirrel, that kept slightly ahead of us but never looked back, just ran and ran and ran! When we finally came to the end of the lane, he ducked back into the tree grove, out of sight.  We stopped and then decided which way to go from there, as my "Cardio Trainer" App on my phone, spoke up in his  British voice saying,  " 7 miles per hour".
That was one fast squirrel, I say!
What a hoot that was, delightfully and so naturally derived from our surrounds! My kinda fun!

The week up to Easter was fantastically busy, and fun in it's own way too, in the salon. I had my "all star line up " as I call them. Faithful clients of the past 25 years, showed up for appointments made, 12 weeks ago for the Holiday.  I Love springtime hair styles!!!  I am always surprised with some of the requests, and so willing to comply for a change always. It revives my creativity, and is always a blast.

Right before Easter Sunday, I decided to jaunt about with the mare early in the morning time. Knowing that Sunday  would be full of Church and family, and not too much time for horsin' around.
I packed a light fare of Banana w/ Almond butter and an Espresso coffee for me. The mare was still eating her hay when I arrived, but I convinced her that it would be worth it to come away with me! 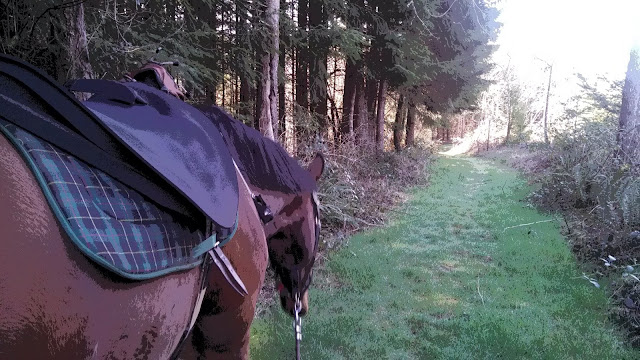 GORGEOUS! What a day!!!!
While the mare delighted in eating the luscious greens of springtime grasses for an hour or so,  I nibbled my treats as well. These outings are fantastic times to contemplate blessings and riches of spirit. The mare seemed to do her own meditations, often she'd stop chewing to stare down the trails. She seemed very soothed....Springtime was tasting and looking fantastic! 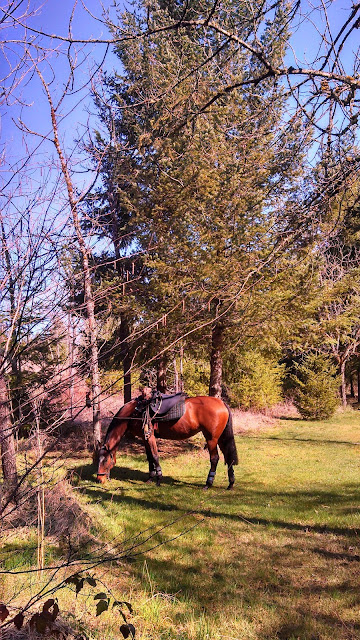 I am proud of Wa mare for standing well when I tied her, taking a pit stop. I had not done this for awhile, going out of sight. Sometimes she acts like she may be the "ceremonial offering" to the beasts of the wild, and gets a bit frantic...this time, not one move. It was awesome to spend the early hours in nature with the mare. Calm and soothing, clearing out  some cobwebs of unrest and doubt.

Easter Tidings were abundant and full of Joy and a refreshing of spirit. Our Service at church renewed me in a different way; reminding me, " therefore, if anyone is in Christ, he is a new creation; old things have passed away; behold, ALL THINGS HAVE BECOME NEW."  2 Corinthians 5:17
Letting go of the old ways of living...yea!
The transformation of the mind, depends upon what one chooses to dwell upon, and  to live for. Being not conformed by this world we live in, 'cause ya'll know what it can do to one's spirit.

PEACE...it is such a Peace allowing oneself to let go of  bad habits and mindsets that stunt. I wish to be free of those that hinder, and full of that which  seeks to serves others; their best always. Being kind and longsuffering.
God knows, I have needed that from Him! 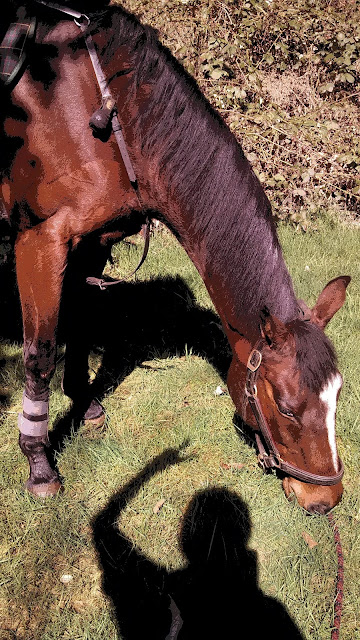 
The mare totally agrees with me too..... Being found in a peaceful way, things always go better! She has been such a love lately. Having a bright sky and a warm breeze, that will always help the mind's eye too! 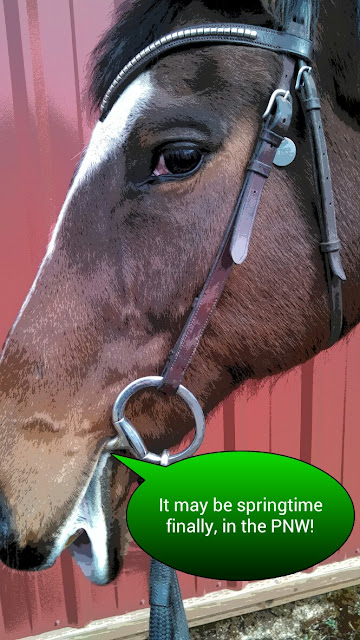 Sending  Peaceful Springtime's offerings to you all; in hopes you were able to enjoy Easter, and be refreshed in the ways most beneficial to you!
Posted by allhorsestuff at Monday, April 01, 2013

Email ThisBlogThis!Share to TwitterShare to FacebookShare to Pinterest
Labels: Easter, Renewing of the mind for God's ways, spring, sunshine