Off Horse On Mend 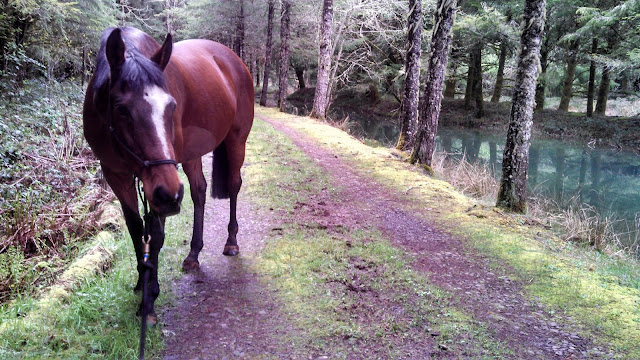 Scene of the spook jettison- incident

I had planned on our first outing for "Mare Walking" to go back to where I was so abruptly parted from my horse. Wa mare seemed reticent to walk the road, and as we did...flying fish(Trout) were
flinging themselves from the waters to catch flies!! This made the mare jump, more than once.
She was super good not to pull on me though. I can't have that going on right now.

It brought up a thought for my mind instantly too; though the fisherman was all the way across the pond, maybe a fish did a leap nearer to us- in the little section of waters seen above, at the same time?
It is astounding to see these 7-12 inch, or better, beauties suddenly fly out of the water!  It made me crack up as this particular Trout jumped four times, in about 3 seconds.

Phone panorama of a place we walk

Wa has been enjoying these walks and all the grass grazing. I have enjoyed getting into the outdoors, in between working a little at the salon, and sitting with ice and a cat on my lap.
The near constant ache is weighing on me, and I feel for those that have had these sorts of pains for years. I am about had with it, and the amount of drugs it does take to stay off  the ache-OH! 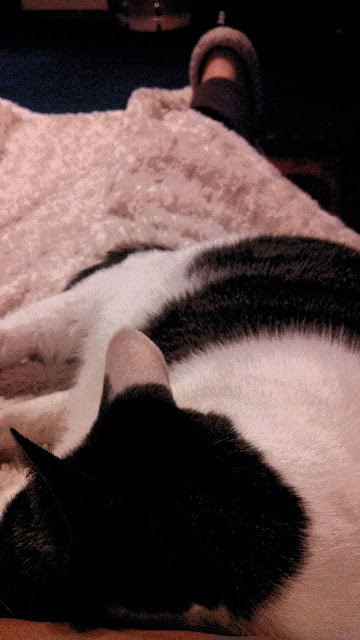 I have to be careful with these "Mare Walks", everything must be done with my right arm. I have been well pleased with the mare, as she still is acting as if "she KNOWS" that I am on the fragile side of life, at the moment. She has not pulled ahead or even made the rope taunt, as we walk and I allow her to graze . 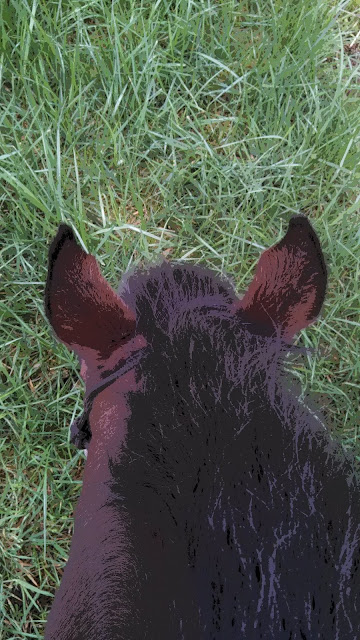 I am waiting for my X ray results back soon. My therapist focused upon my neck and the C 4-5 disks Friday. The pain and tenderness there, with throbbing  left arm,  has me worried about the possibility of having fractured a disk.
Of course, one of my friends from church came into the salon this week, she had a "ruptured neck disk" a few years ago. I have strict instructions not to cut her hair shorter at the neck...as she has a scar from the surgery. It made me slightly nervous thinking about that, as I looked at her scar.
My Therapist has been reassuring me that he thinks; while I did injure my disks pretty bad, he knows the signs of burst disks and mine have shown lesser symptoms. My arm strength has not decreased and while the throbbing has continued, it has moved up my arm and out of my wrist and forearm, in the past 10 days.
I'll go with that positive till we read the X rays!

I will be thankful, as I truly am, that things were not worse and of course, be thinking of how I may decrease injury rates for riding again. 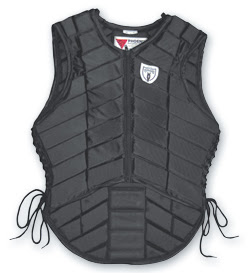 I wished I had my VEST... but will be for the near future.
My therapist also mentioned something that had me cracking up...Mouth guards.
Yea, I broke a tooth too in the fall. The first thing that hurt, was my jaw that day. Now I know why...it probably ( like I mentioned) was open in  sudden shock and snapped shut. So, tomorrow I not only have to get my mare's hooves trimmed by someone else, though trusted, it is because I am unable to do it myself now. I go to a new dentist as well. I HAD to find someone  new and on our dental plan, as  somethings I need will be covered 100%.
~Sigh~
*************************************
So while I miss the mare terribly this weekend...and getting out in the out doors places.
BUT,
"the-entire-day-resting-healing-up-program", is what the Dr. has ordered...when I may steal it!
So I will think on our last 3 mile outing walk...The mare allowing me a pit stop here, but keeping an eye out for me, over her shoulder all the same! 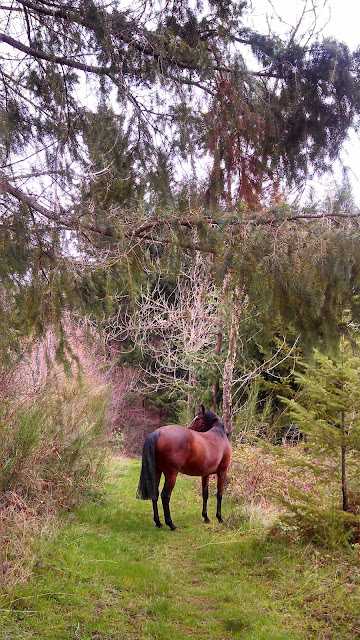 And I shall think on the D'apple mare too. We got to ride  once or twice while my sis was at the coast a few weeks back, when Spring looked nice. 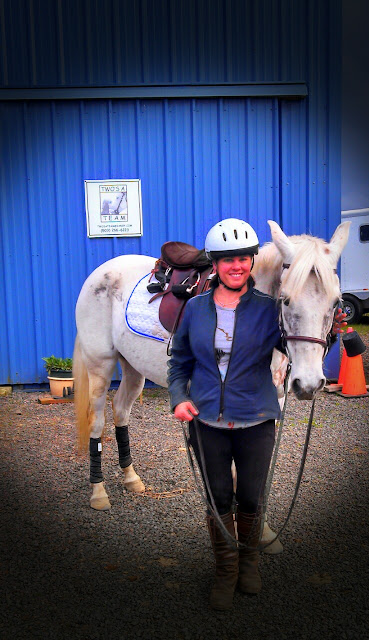 D'apple mare was super for me, as we worked in the newly reworked round pen. It is awesome  having the new sand layers, with the boards around the pen, to keep the investment in place.
Very soft, with no protruding, offensive rocks to make the horse have to think about anything but -YOU!
It was so warm, she looked dosey! 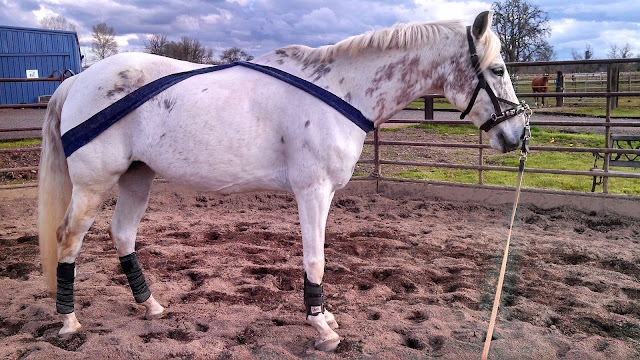 It has since turned fierce, resembling winter again. Like most of the country, high 70's then freezing overnights!
I missed the last lessons with trainer "C", because of the accident I had.  But my sister told me, it was a total crap day for lessons. The arena where D'ap is , is partially open and the Wicked hail and winds of the day, had them stopping  frequently so, for not being able to hear!
I am glad I missed that.

My sister is still mending her Sciatica problems. She finally got to the bottom of why she has been in so much pain...Atrophied muscles around the nerves.
So, she is now doing therapies to try to remedy it and heal up. So JUST MAYBE, she and I will ride "TOGETHER", sometime in the future. We have not since she moved up here last fall, due to her fractured ankle bone and now the Sciatic stuff.

Lots to look ahead to...and feeling up to par, is the first on the list!