Summer of trails and new Friends! 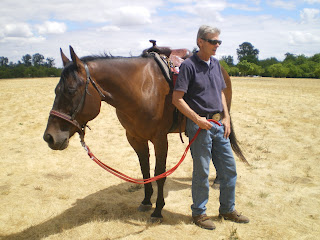 Can any of you horsey Bloggers identify this horse and rider?
I met him for the first time last weekend riding at Mission State Park... though many of you already know him here in Blog-land, I am sure. Nice Guy, very large horse.

The riding at Mission was a bit of sensory overload for my mare...but to my great pleasure, she actually did alright; though the start was rough by getting left behind and she really was uppity about that. She made up for it later by being ultra calm for one of the new friends I met and her Gelding that was on high alert after having kicked out at another gelding for running up on him.

She did some in saddle "attention back to rider" work here, then when that did not yield the right response, we got off and did ground work, while the other 2 rider went on...which insighted some mmore response from him.

It was worth the time taken and longer ride time to do this for my new friend Carrie. She is leaving town in a few weeks or I would totally have been calling her for trail ride times too!

I really enjoyed Mission and look forward to returning there very soon to meet new Friends and their mounts.

Until then, be safe and courteous riders on those multi-use trails. I don't care for them too much myself..the bicycles have a difficult time yielding and the Whistle that my good horsewoman at-Equine mine got for me..I ride with it ready now..it is an attention getter for those bikers that want us to yield to them!

Just me being forward and by the book again! after all- it is posted on the trail head signs!

Posted by allhorsestuff at Wednesday, July 30, 2008