OH...I have really been dreaming about ..a lone ride...just me and the mare!
The start of our venture out was pretty, weedy flowers, all over and under us! 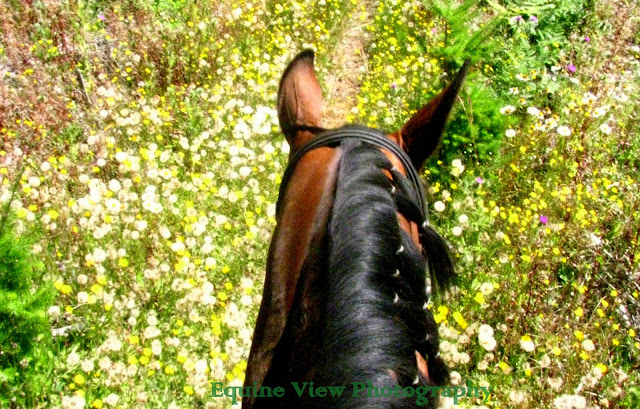 This summer has been so busy, with riding plans with others...I have truly MISSED my lone ventures  with Wa mare~
I actually dreamed of our ride yesterday- the night before...trying to remember the route I wished to ride backwards, since I have not done this particular one alone or in the direction I was thinking of.
It is the "Stoney Mountain loop", I did with my PBO on Danny and Romeo, while there was still snow on the ground up there.
That was April..and I have Not been around the loop since.
So I leisurely got Washashe mare ready.. she seemed very happy to be chosen to go, since I take my sissy's mare, Pantz, often  now.
My man has been gone to Alaska for the past 2 weeks time with his Army band regiment. So I have been really horsin', as you know! He come home today...so I thought I better take my LONG ride now and around home.
The mare was excited and wanted to trot and canter...I let her do whatever..and we got up to the second clearing site, on the 900 foot accent, pretty quickly!
I allowed the mare to graze and catch her breath..she was in such a hurry...the air was scarce.
It is normally a 4 hour trip...lets see what we do this time??
Now you see her.... 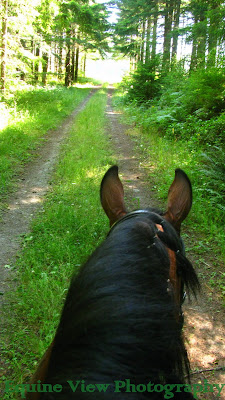 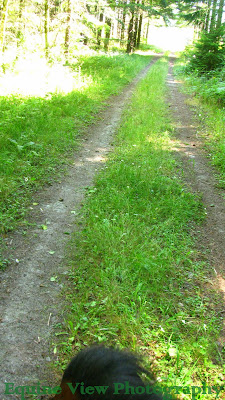 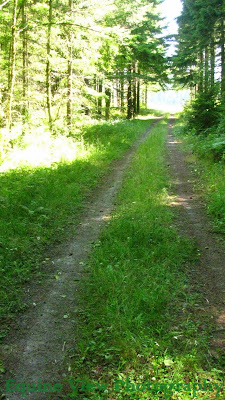 I think all the work it takes to come up here, her carrying my butt..she appreciates the bites of mountain grasses!
She got sticky a bit when we entered the woods here...but then, decided it was cooler in there..and we had a good " fern path" ride.
One thing that can happen when filming though...you'll see...the rouge foliage can gang up on you!
We almost took a wrong turn. If I had looked at the photo's from the first trip( linked in post) I would have seen - what road to take .
As it was, I started to take the wrong road, then decided to go down, and It was correct!
Whew...Okay here is where I totally understand what JANE Augenstein means by "FLIES FROM HELL"
We were just moseying down the back roads( out in the open) that leads to trails and more roads on our 7 mile journey, around the mountain loop.
I could hear and see, a few of the nasty flies buzzing the mares head..I had a branch-swatter in hand, for this purpose..I was swinging it around my body and her head in a figure 8 fashion...it seemed to work at keeping them at bay. TILL....OUCHY- CRAP-OLA!
I had been focusing on the mare..and they snuck up behind me and 3 of them lit upon my back!!!
All at once, they bit me, and I  yelled out!
The mare leapt into action...trotting down the hill now..we left them behind!
Holy Mole...I still felt like they were there...so I swatted my own back for a time...like 20 minutes! My arm hurts pretty badly today, from over use.
We finally got to the final push hill...I was going to get off and have Wa mare pull me up from behind, with her tail...but, she decided to canter up- the entire-rather steep-long hill!
We walked together on down the hill homeward..she was a pooped out pony~
I really loved spending time with this Mare -O- Mine!
She was perfectly willing and able to spend the afternoon gallivanting the hillsides with me.
Here is the new time for the Stoney Mountain Loop.
3 hours! She and I did stop quite a few times but..that is a great time for the 900 foot climb, and decent we did!
Love you Wa mare!
Have your gooey, sloppy Beet pulp with added Salt electrolytes- I  prepared for you before we left!
OOOU what a treat she says!!
Posted by allhorsestuff at Friday, August 13, 2010

Email ThisBlogThis!Share to TwitterShare to FacebookShare to Pinterest
Labels: my mare and me time