Though the wind whipped herself wildly so and the bitter cold well- he tried to defeat our goals. Having been shut in the stall runs for a few days of snow, my Mare and me needed TO GO!
I started by using the bucket in the tack room that was filled with really warm water , to make sure the Bit was acceptable. This water line stays available for the horses stall waters, when the water is shut off to the rest of the barn lines. 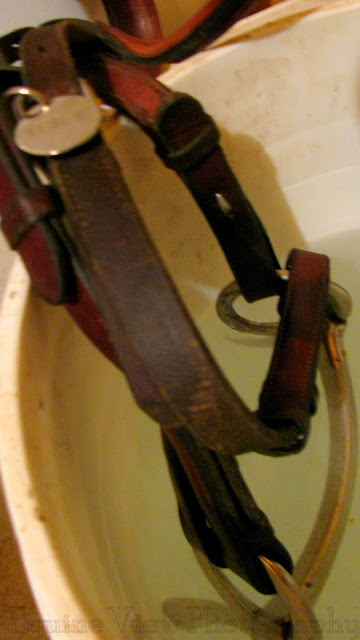 I made sure that the Mare was fully dressed in her Winter Attire. I had to get it all out again, from above my locker storage space.
CCCoooold Ride ahead. 3o on the temp/Feels like 45 in the sun/ when the wind whips..it then feels like 19 degrees! 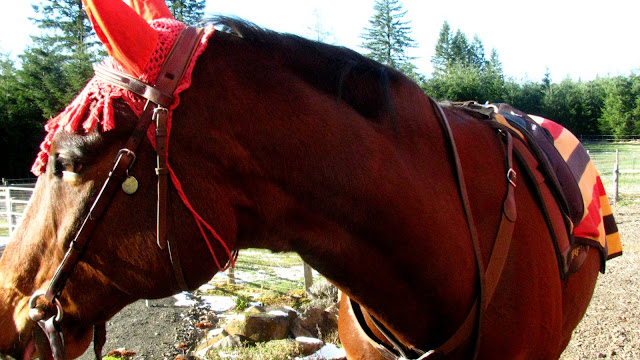 Just 2 weeks ago, as it was near 50 degrees, the owner of the stable had warned me NOT to put it away...as I could bring on another cold snap. She had mentioned Murray's law earlier in the fall about something happening...if you prepared for something else.
HA!
I did not know about "MURRAY"...who was this??  I only new about "MURPHY'S LAW" of opposite reactions that could potentially be against you in the universe and cause you to work harder or foil plans -altogether!
We decided...Murray was MURPHY'S brother! Not quite so bad a dude, I was hoping!

I was pleasantly surprised with the mare's attitude. She was very happy to be going, and we tacked up in record time.
I know "WHEN SHE IS WITH ME" for a ride, as the first leg of it  after I mount from the "Mounting STUMP", she either begins with her pulling towards home or walking on and forward happily so. 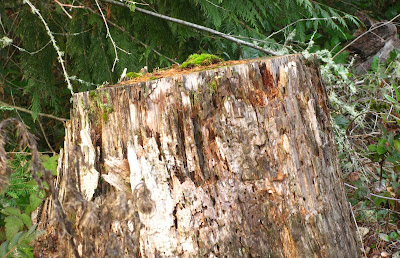 I let her choose the direction this day too... She chose something I did NOT expect her to.  But I think it made her feel good today, as she had her favorite horse to follow into the woods~ 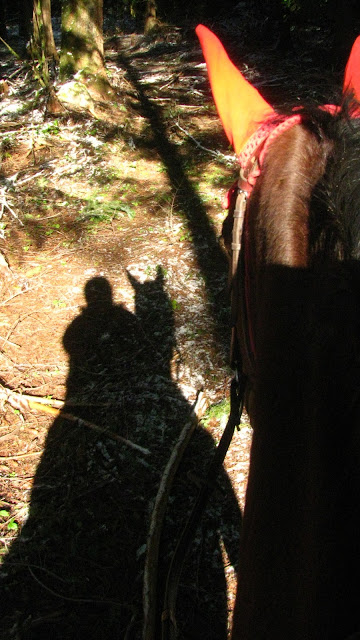 We have had Logging going on below the stables and also, on our road to the stables. It is the beginning of preparations for a 2013 all out assault on the forest we ride in.
I posted extensively on this last year...it made some very INTERESTING RIDING TIMES.
For now, on our nearby forests, They are only making  the solid and packed gravel roads into the forest making ready for the heavy equipment. It has been really noisy with  loud THUMPS and CRASHES as the large evergreen trees come down.
The Logging below the stable is on PRIVATE LANDS we are allowed to ride on. It has made for some mushy, muddy messes to pass through now...the BIG TRUCKS tried to gravel the roads...but some of them won't stay above the mudd caused by the heavy dump trucks bringing in more gravel for the logging equiptment to stay above ground and work.
The PRIVATE land owner made  new routes in the past 2 weeks, into his forest...my mare noticed it before I did and asked to check it out!
Okay Wa...you follow your shadow-leader! 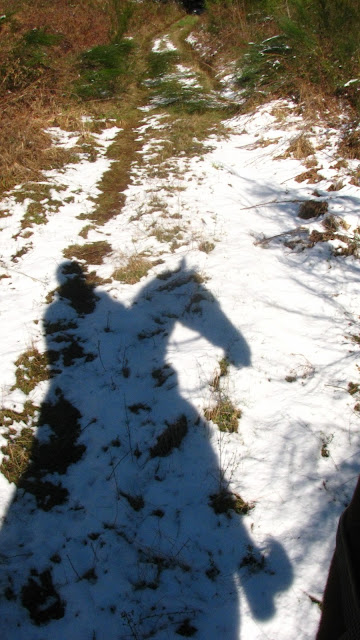 She normally does not ask to go into heavily tree'd sections, so this was a treat for me! 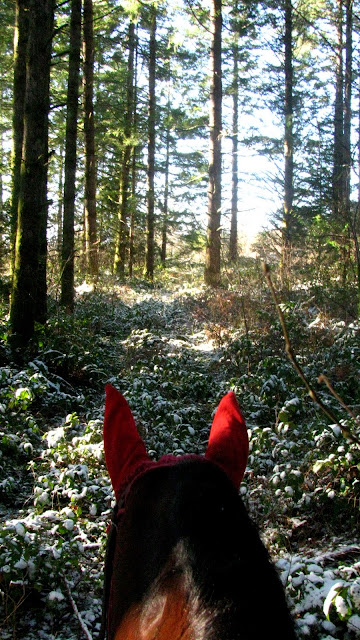 We wandered about in the forest and saw pretty snow covered sights,
laying in the stillness. Casualties from previous years, that had made the way for our trip this day. 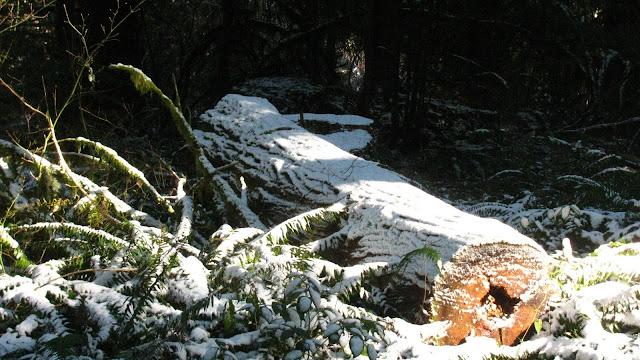 I was thankfull that we decided to venture in the deeper woods, though Cccold indeed...we were free from the biting wind. 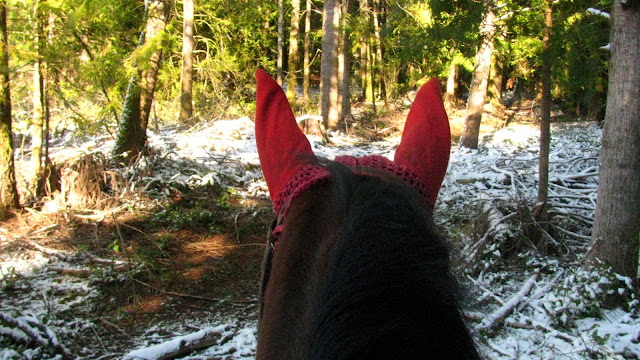 We discovered a pass through from this PRIVATE land to our other normal riding area. I had to dismount to move some brush and make sure the mare didn't tangle with an old rusty fence line that was down. She stepped on over it and we went on towards home...though she asked for more time out by choosing the longer paths away from the way home -(another surprise this day) . I asked her to turn towards home and we began to go back into the welcomed sunlight. The unwelcoming Winds, tried thier best at biting us again!

I was prepared for them!! In my "Stay Puff" vest, and  soft fleecy head and neck cover, we strode forward. 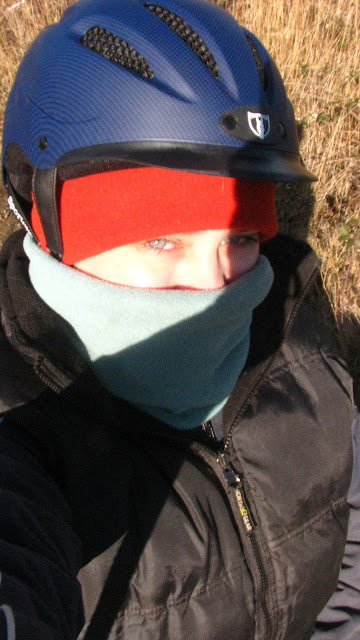 The mare seemed to be thankful too, that I had put her Ear Crotchet  on! 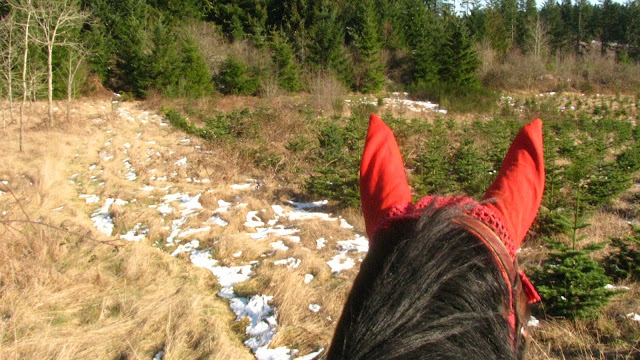 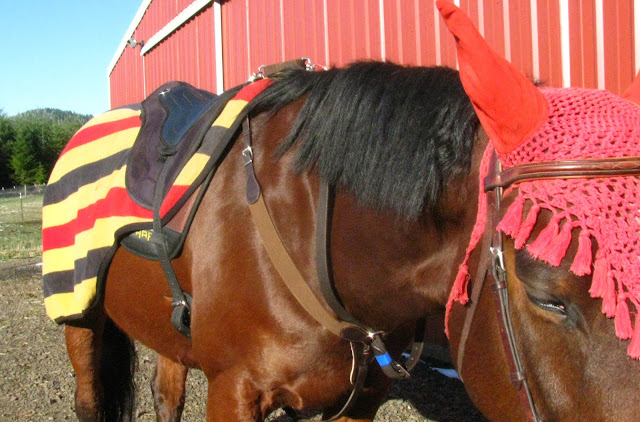 I took her gear off and noticed her "Bad hair Piece" look, from the Ear Crochet. Sometimes when  I take a braid out of her forelock, this occurs too. looks like a bad Toupee! 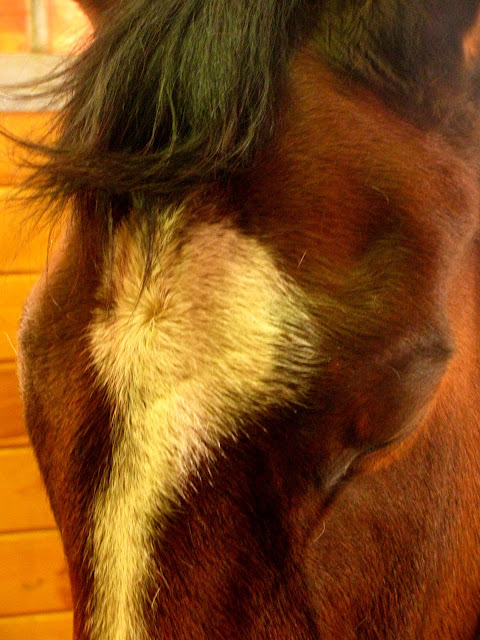 We then went back out into the sunlight for hand grazing.
She was so happy to find some tender grasses pushing up . Very much a delicacy for these pre-spring times! 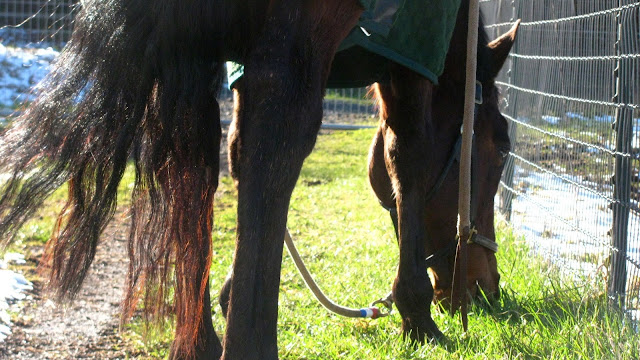 We stood together and SOAKED UP THE SUN -that was to dissapear again soon for the next storm due in anytime. 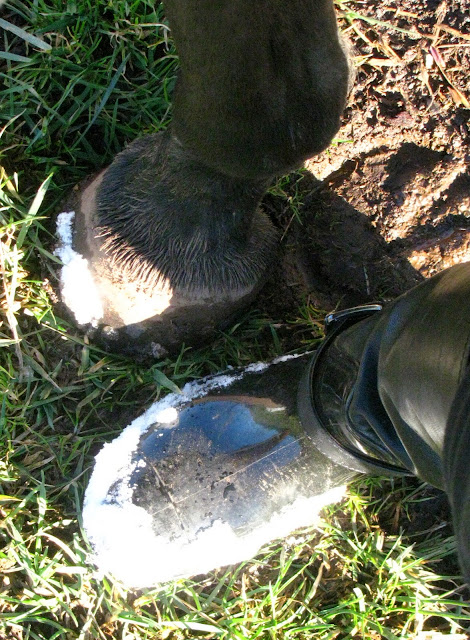 Little funny clip here to end with...As the mare wanted the grasses in chill mode, under the snow, she'd wiggle her lips over the area to clear it...made me giggle~
GOT SOME TOALLY FUN TIMES TO SHARE NEXT...Meeting up with fellow Bloggers!!
Posted by allhorsestuff at Monday, February 28, 2011