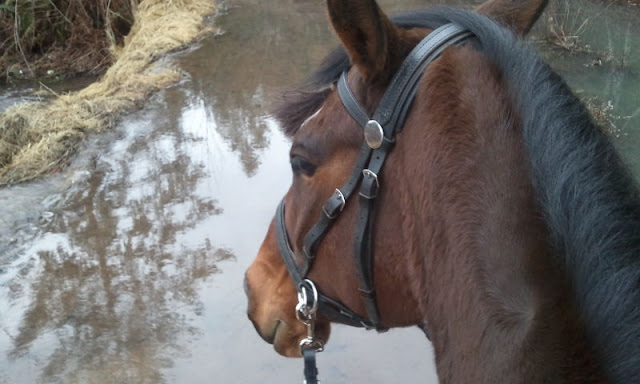 Our rains have begun for springtime~
The pond to the right of us, seen to be slightly greener in color at my mare's mane line, has overflowed the roadway. To the left is a 6 ft or more,  drop off to the creek.
There is a man made bridge, we must ride over the creek. It is layered  with soil and gravel..over ?
Lately, since the large Dump trucks, laden with loads of gravel and also the HUGE-O-Logging  equipment vehicles have been up and down - it's wearing thin. It seems to be packing down and  now coupled with Spring rains...ooou, not good.
I noticed it the last time I rode out. My mare was pensive. She does ALWAYS KNOW THE TRUTH. I sometimes think she has work ethic issues..but, it usually has (hindsight is perfect sight) been pain or her instincts, that make her foreboding unwillingness to go or do what I ask of her.
Last fall, as we rode a familiar territory, the mare stopped dead and refused to move forward..I began to sing a silly/happy.."nothing  is there" song. She grudgingly moved forward for me..looking into the forest on the left. SUDDENLY, a man with a machete popped out of the woods !! See,  she was so right! Who would have thought he was in there?!
She knew~!
So back to this day...the mare had inoculations a few days before and I was not sure I should even ride..but thought to go out for 30 minutes only. She told me..she was not sure with that decision, by standing out in her paddock, looking at me as I beckoned her in.
She and I got to the Creek crossing that was overflowed with water..she stopped, snorted and looked. I asked for her to move forward..she did, and all was alright. I gave her a treat for the good efforts and willingness. 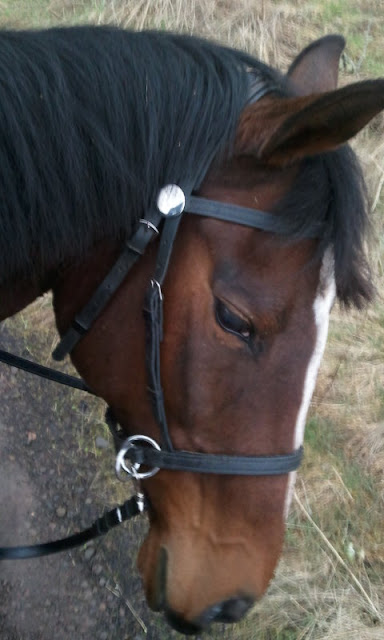 Good girl bending around for the treat~
We rode for the short time, as I had arranged with the mare beforehand. When we came back to the  overflowing road/bridge,  she again stopped, put her head down and snorted. I said.."comon' lets go home, it's starting to rain!" She again obliged me with the willingness to go..but this time, as we hit about the middle of the obscured, watery roadway..it gave way and she tripped forward into a hole!
I had images of Lytha and Baasha in Germany...falling through the bridge!!
She was able to jump out of  the sink hole and remain  upright. Something was not right, and the murkiness did not allow me to actually see that hole developing...yet-
SHE KNEW!

We returned as it began to rain. I  dismounted and took the photo of her waiting for the gate to be opened availing her shelter in the barn and hay... Washashe mare looked so full of disdain for the documentation! 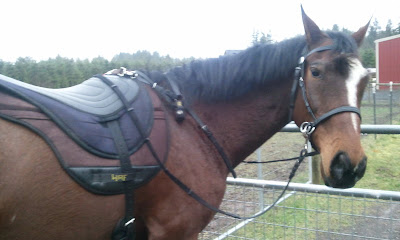 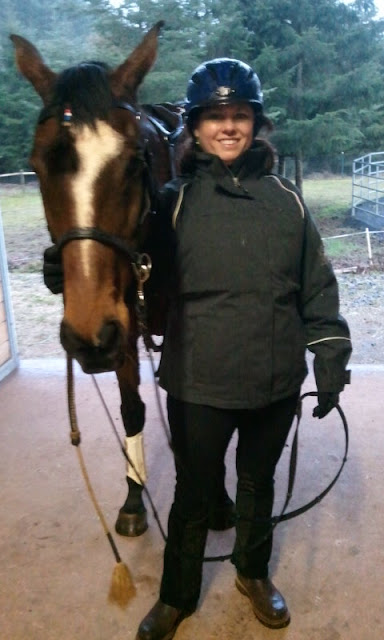 I told the Stable owner of us almost falling, as there was an  apparent,developing hole on the road bridge.
She was about to go out and ride too,with the others.
They had an uneventful ride and then today, days later...I opened my mail up and it said, "WARNING", from her to us all at the stable. She had gone out for a ride on her paint gelding,  and he and she fell through the landbridge- up to his knees. He did not panic and they removed themselves from the bridge- that is returning to the creek in a hurry!

Thankful I am that she and also the mare and me did not go through. She has since contacted the land owner neighbor to tell him about his bridge- it is about to go down!
I BETTER WISE UP, is what I'm repeatedly being told, by my mare! Good thing she has patience with me!
Posted by allhorsestuff at Saturday, March 12, 2011