Mr. Sunshine appeared, and it happened to be my day off!! 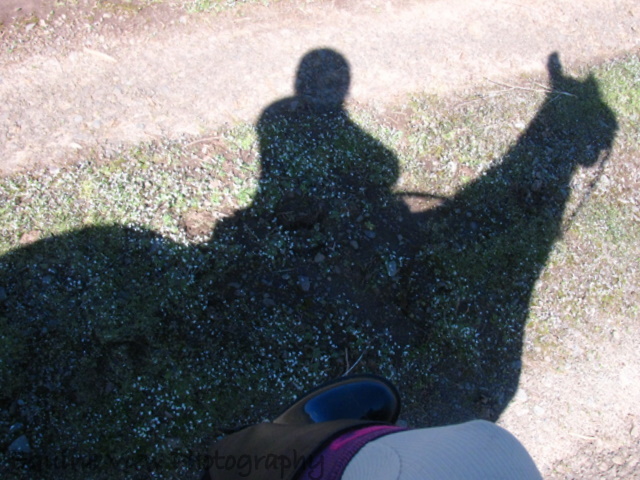 Since having the flu-throat-cough-stuff... this is week 3 of just a little cough remaining.  One or two sunny days gives me hope without doing me in! I'll take what I can get for sunshine- to me it is HEALTHSHINE!

Everyone is itching to GET OUT THERE and RIDE-HIKE-GARDEN-and WALK about!!! Mee too.. SO to get this day, that is above 45 and sunny..I am in it and on my mare!
Unfortunately lately, when my throat hits the differing temps, warm air of my rig to icy cold to all across the board through the stable and taking a ride..woo..I HAVE to keep my neck warmer on or It croaks and spasms...and feels like it may relapse into something. But one MUST GET SUNSHINE in their eyes and also its goodness spilling warmth  throughout the body ! I HAD to go for a ride..even if bundled up to the neck!

As I arrived, someone was leading Wa out to the turnout fields( or was it the other way around?!) the mare was so pleased to get out...prancing along.  We have had rain storms mixed with  heavy, pelting, hails.  So the horses were in most the week.
I drove  up right before the mare was to the fields, I tapped the horn to get the attention of the handler..they heard me and turned around. Washashe felt VERY slighted! I could clearly see that!

Three people had horses ready to go, as I entered the stable. A trailer was hooked up and I thought for sure- 2 of them were jetting off together..nope. All were heading in separate directions this sunny, warm day.

The mare and me too...headed out for our  only solo- ride of the blustery week. It was finally inviting us to come play! 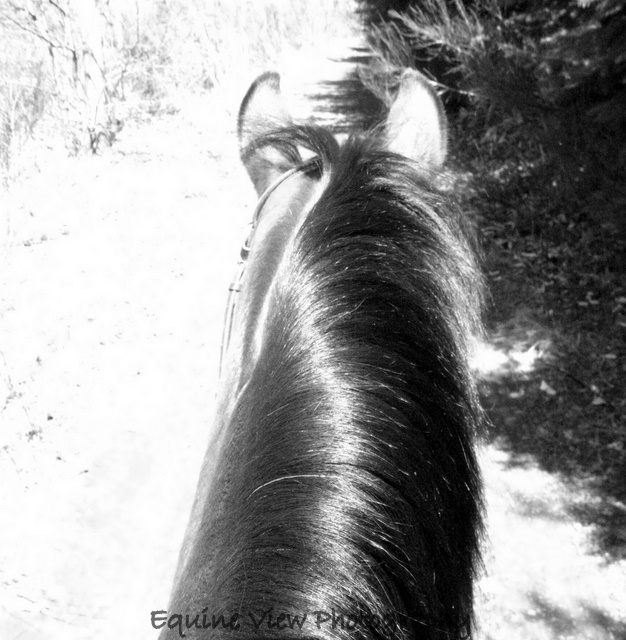 I had no training agenda in mind, we both were so content to get out into the sun shining world.
I let the mare choose the directions. She picked a new trail loop we had worked on a few weeks ago, as I walked with her. It was forged by the logging trucks of last month, and takes us to a neat-o-trail that will will be good enough for jumps later, when it dries a bit. When I took her for that  "Mare Walk", she rather liked the new scene. She does love her change of venue and scenery.
This new trail spilled us over to another road we trotted up. As we topped the hill, I looked at the foothills. They were freshly dusted with a snowy  icing. Those hills  are (and will be again)  our summer riding places. Hill training grounds- 1000 feet  up to 2000.
I am wondering how we shall do later in the summer, we have reservations for Eastern Oregon with the stable to stay in Joeseph, Oregon. It is much higher in elevation. 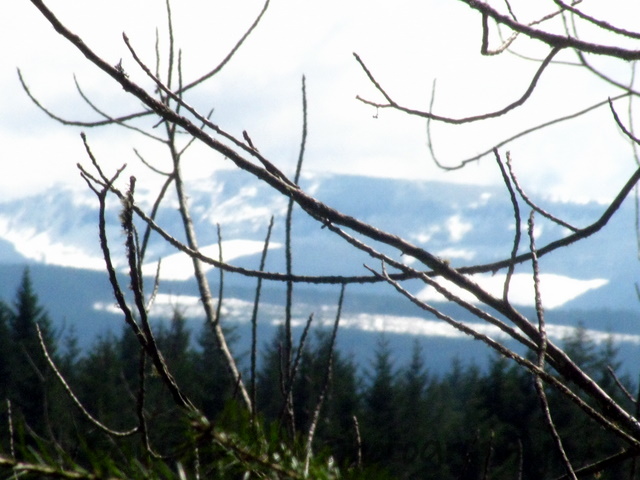 Some of you may remember me mentioning a Clinic I was to Audit  at a nearby stable with one of my stable mates. It was supposedly on Biomecanics of riding. I say supposedly because..I  was so disgusted with what I saw there.
It to me, was no less than horse abuse and poor training at a HIGH price. I won't mention any names or publish any photos...but, it was sickening and the older trainer-( my sister remembers riding along side them YEARS ago)  a judge at one point in their life, allowed one local trainer to abuse her poor horse and some other talented girls to have some of the worst postures, creating their own riding problems.
The well known instructor..tried to get the younger riders (not the puffed up &seemingly on crack or speed- abusive, local trainer) to ask their horses for things(unsuccessfully so) for something my mare and I do ALL THE TIME...
SIDE PASS!!!
I did not see one step without a jerk of the bit and or, a kick of the heal...unfortunate!!!
As I thought of them jerking and kicking and hitting...the trail I was on had some low hanging branches...I asked the mare for halt-I breathed out- I shifted my weight to the right slightly, without collapsing my hip. It is easier with a stirrup to step into but, I pretended it was there...I gently touched her left girth and the mare stepped over, accordingly, one correct step at a time. Then we were smack-dab-next to the branch for me to tweak out of the trails line of travel!  She got a big rub and audible praise, each step too!
It is hard to see the remnants of the fir tree branch upon her mane..but with tweaking, comes the drizzling of the needles! 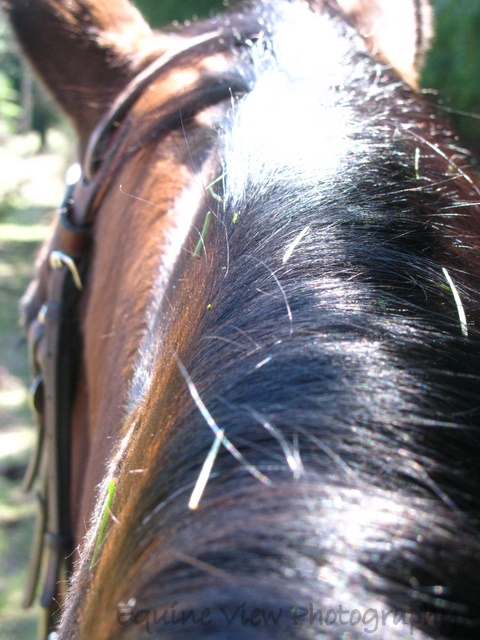 Wa mare used to become upset with things crashing around/above her, and also the trickle effect, of needles,  leaves and bark falling on us- as I broke the branches. Now she is really patient..after the many years of doing such things on trail rides! I think she enjoys the standing time now. I can let the reins rest on her withers ( I tether them to the grab strap-in case of sudden movement)  and use both hands to tweak our favorite trails!
We went onward riding, after the tweaking of branches- to the "BIG FIR LANE". It was  pleasantly dappled with the shadows of them! I let the mare drop her head to the ground and walk...it was so peaceful! 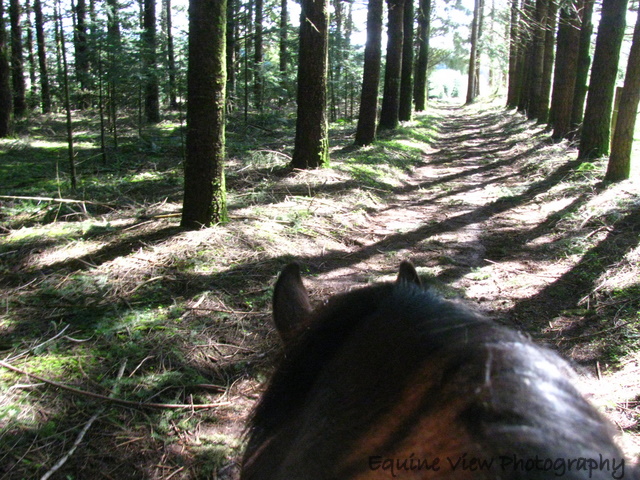 Now here is where my Wa mare actually surprised me...she apparently had a training agenda -for this day-I was SHOCKED TO DISCOVER!!!
She turned up the clear road way and towards the farm with llamas ,  donkey and many other assorted noises, that usually have her saying in her mare body language,
"can we turn around now?!!"
Not this day! This day, was hers to discover her own strength to face down her world, with me being very encouraging for her to try- one step at a time-allowing her to stop when ever she wanted and start again, at her will. It was a glorious SUNNY DAY, I had no where else on earth to be!!! 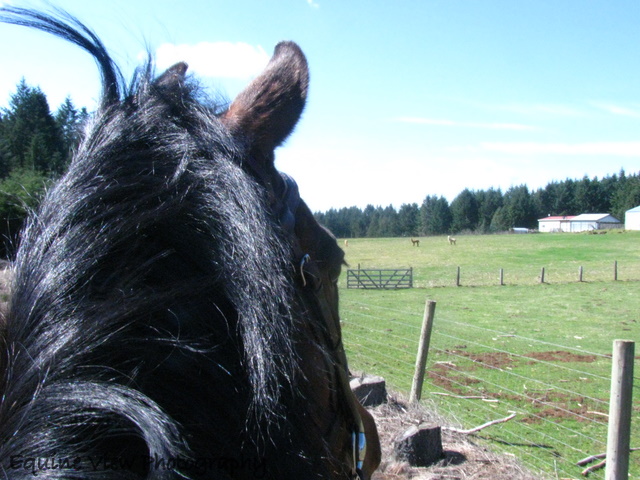 She took in the sights..sniffed the winds for clues to what she was up against...I zoomed in on the cute little donkey, checking us out too. 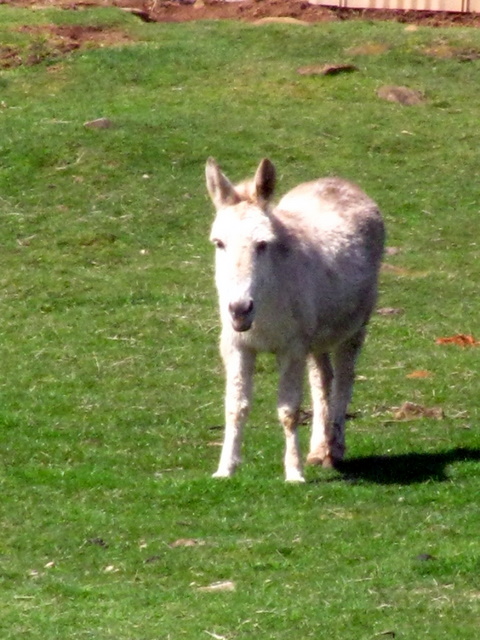 No one decided to come nearer the fence line this day. I was  secretly happy about this as, I wanted Wa mare to be able to make the entire fence line with out  (seemingly)  an apparent challenge from the inhabitants of the farm. 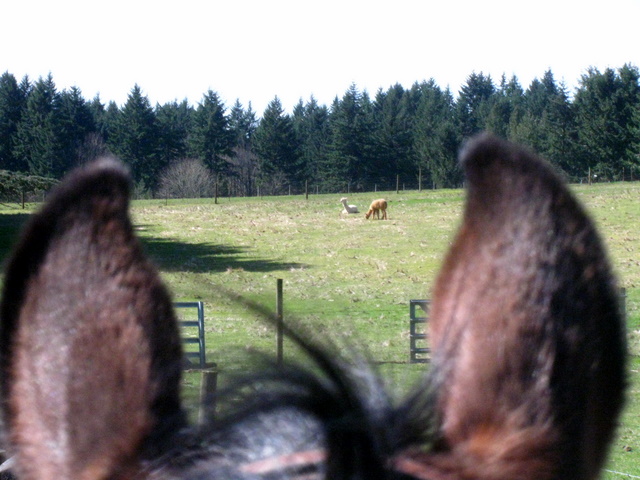 As the donkey walked slowly down the the llamas, they rolled and bucked and tossed the top notch of furry masses of hair around. We delighted in the distance we could watch all this from! 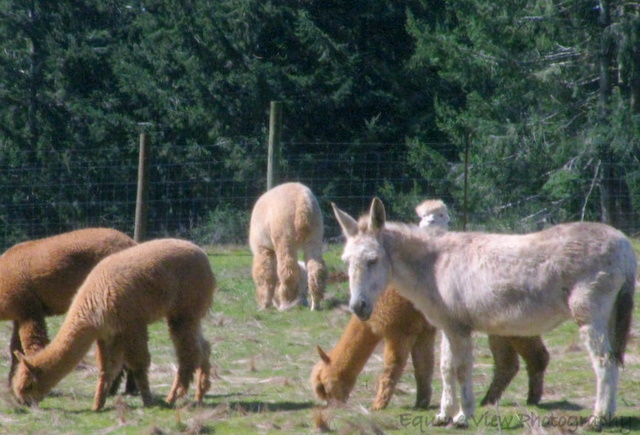 As I asked for a step at a time towards the herd of unusual creatures...it happened....
The wind blew the strong scent of them to the nostrils of my mare!
She caught the unusual scents-snuffled it in and into her thought process...! I was so giggling inside too...she would dip her head up and down..look to the left and to me, then back, then to the right and to me, then ahead again. She never tried to move away...I loved it!
It was delightful..we moved on around the field and then cantered up a small hill and turned right, to go towards the next set of llamas. This is her disliked avenue. She did not want to go there and thought she saw something in the distance, so she just had to stop to check it out. 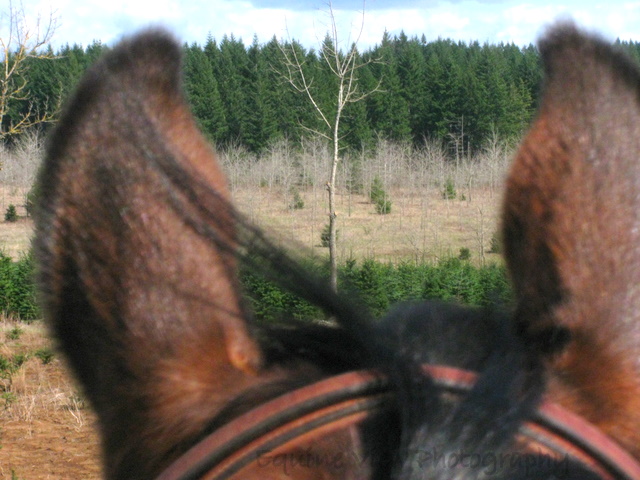 There we NO llamas this day, in the avenue of fear..but she stopped dead soon enough. Something else was coming!
It was my PBO on her Neat Paint gelding, Skyler. Sometime I'll show you all the quirky, cool things he does...like smile and fetch. HA!
We stood and talked it up for 10 minutes, which was excellent for Wa mare to just chill with someone new. I had to pull her away from touching him a few times...she can be a hypocrite. IF HE  HAD TRIED TO TOUCH HER...oh..  snarky face and maybe a LOUD squeel! 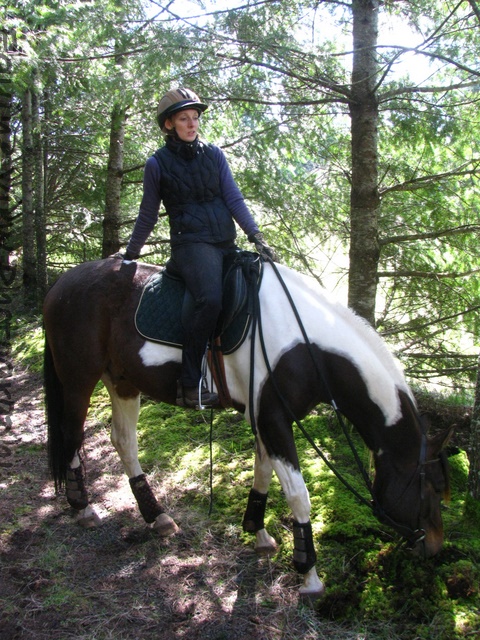 But no, Skyler ignored  this Mahogany bay mare and stood his distance. He was interested in what he may find to nibble on, below~ 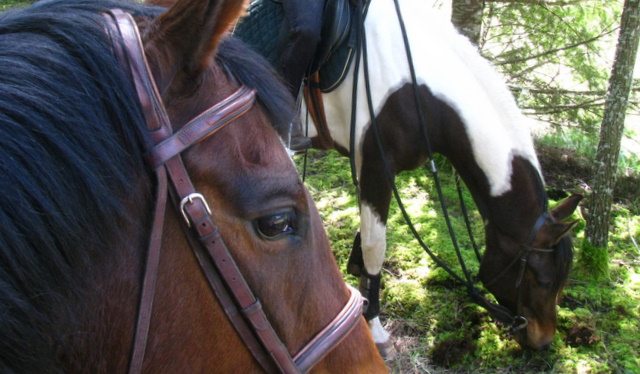 It was such a nice ride, hopefully back to health for me and the start of training for the mare and me.
She was really sweet, and to be with out on the first nice day- LOVED THAT!
She got frazzled once, when someone above the road level and out of her view at one of the ponds, chopped something loudly.  She startled and jumped forward. We turned back and as it happened again she jumped again, but we went even  higher, to see the noisy humans.
All was well again in her sunny world!
Home safely from the solo ride...the mare relaxed in the sun. 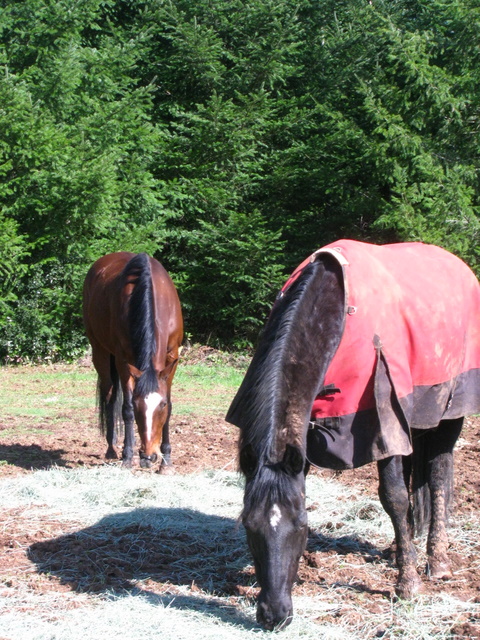 This look cracks me up...she must have heard something behind! 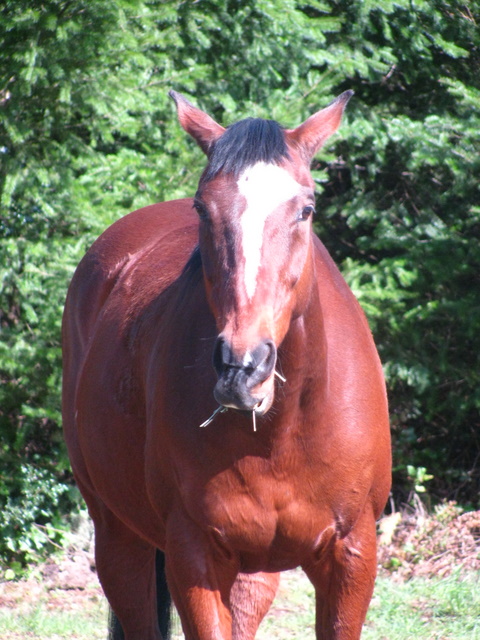 I actually did not put her blanket on for her remainder of the days turnout knowing... she'd love to muddy up herself...but to my shock, she did not roll. She visited with her turnout buddy Theo, lazily sunned herself and went to seek some springtime grasses. 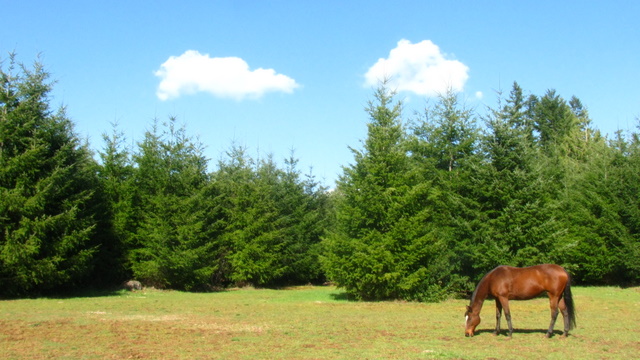 Next time out- we go for some time with her Lead mare Pantz..."A barn-over" !
Hope you all are enjoying some springtime!!
Posted by allhorsestuff at Thursday, April 14, 2011