Prairie Riders of the Zumwalt 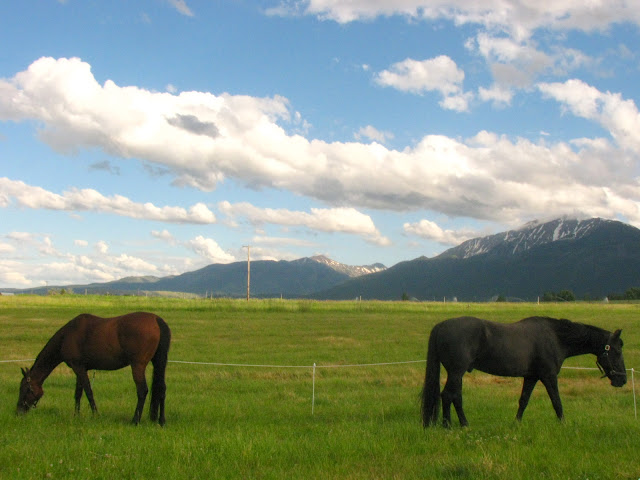 Our Trip to Wallowa County last week, was smooth traveling. We arrived to our destination 7 hours after leaving the Portland, Oregon area. The horses were very happy to get out of the trailer and stand on solid grounds.
The near 800 mile trek we made following our PBO, that made me happy to have a focal vehicle, and the security of if something happened to us..someone would know. I very  happy with my truck, it gave us all a good ride with enough power to manage the massive hills pulling the 2 horses in the 3 horse space.


My husband set up the Temp fence in the 1 acre field...it lasted all of 7 minutes! Oops happened, as someone forget to latch their temp fence gate and that allowed their horse to escape...it then proceeded to allow our horses to escape!
That scared my turnout buddy and I into using the 4 board fence corral, up by the main house! Barbed wire and new spaces with adjoining herds of horses...nope..we chose security over grass.

The view from across the street to one of the pastures, from the main house~

Looking up to the main house and our horses in the board fenced corral, happily munching hay from the "Porta Grazer" hay barrels. These barrels simultale grazging,  as the horse must pull hay from the incert. A hard form with holes the size of  horse mouths, makes the horses pick hay from it, as they would grasses. It is great for keeping horses from eating sand on the grounds, as well. My PBO found them at a horse event and purchsed them for her stable's horses. They are awesome! If it takes a horse 1 hour to eat a given amount of hay, liberally so...this makes them slow down, and take twice the amount of time.
The building above my mare & Theo below, is where my man and I got to stay at this 1904 farm house. Our room was over the carrige house that has been converted to loft room, over the current garage storage space.
It was luxerious!

Our first ride the next day,
was to the ZUMWALT PRAIRIE.

Everywhere we went we saw the mountains of the Wallowas. Someone said it is called "Little Switzerland of Oregon"...I saw why!

looking forwards or back, all we viewed were glorious mountains!

Then we arrived...after a REALLY long, rutted, gravel roadway of about (felt like) 20 miles!
I was the last to mount up and my mare got uppity as the rider started walking...once I said, "
please wait", and we went second, that was it for her compettitve attitude! YEA!
We see these corralled off areas all over the hillsides of the Zumwalt. They are to protect select sparce vegitative outcroppings from the  Elk, moutain goat, Bear, and other larger hoofed and pad footed animals.
The 330,000 acres of prairie is the last remaining in the continental U.S.- for the natural "Bunch Grasses" and other species + wildlife in the preserve.
It's Harsh climate, and poor soils have  preserved it from the plow, unlike most other areas of it's like, around the U.S. .

We pretty much rode through dappled, but  minimal shade. It only occurred when the scattered, dense clouds banks rolled overhead. it gave us such pleasure to have the shade for a few minutes...there were NO TREES here for us to get relief!
Us Western Oregonians have it so good, for that shady relief of riding the wooded parts of trails.
I was extremely proud of my mare, for she would travel in front, in the middle, and almost anywhere I put her... it is what I (HOPED) thought would happen, as she looked over the vast prairies, with NO END in sight..NO HOMEWARD direction!

We had gotten some distinct impressions from our host, about places to ride that were a bit confusing, when all said and done. I believe she thought us to be wimpy Westerners for our riding habits...none of the places she sent us to were as she described, or even where she said they would be...we frequently got turned around with faulty directions. It was rather frustrating. I have decided- WHEN I RUN our Ranch B 'N' B, I shall have GPS units, with preset routes programed for all the rides there are- to take!
AND, we shall give a course for how to use the GPS unit so all can manage themselves!
We rode and rode and rode, into the prairie loop we set out to accomplish. It seemed so much longer than anticipated!
My friend with her hoof booted Theo horse and me,  with my rear "RUBY SLIPPERED" mare, had some problems with the boots...mine twisted and contorted..I constantly had to readjust them. So we fell behind as the 3 others trotted up and over the hill.
We all managed the GATES of the place..there were at least 10  barbed wire and post gates on this trek.
I looked up our riding lands HERE-BUCKHORN RANCH wow what a property!

After our 3 amigo friends  trotted up and over the ridge,  my riding partner and I adjusted our hoof boots...we saw them no more..so we went on down to a pond, to see if the horses would drink.
Proves again, you can lead or ride a horse to water.... 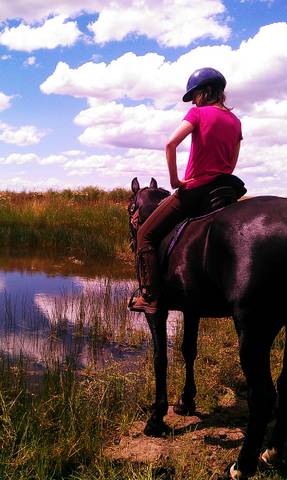 Theo just looked at the water and ate some grasses next to it..mine drank heartily, making me happy.
As we left the pond side, I heard an unfamiliar statement from my riding partner ( I won't repeat the   exclamation) it made me laugh and wince and moan- all at once...
. . . she LOST A BOOT!
We then went back over our tracks to find it...I was already off my mare so when she actually said, "THERE IT IS!" I was able to pull it from the bog and then rinse it off in the pond....Can't believe she saw this...
Can you imagine seeing it from atop your horse. . .

. . . with just the smallest part of the red showing!

Again, after reapplication of the red boot, we mounted up and began the Open Range Ride homeward. While beautiful, it was warm with no shade in sight, or riding partners.
I fantasized out loud, many times, about how
I should have given our partners my truck keys...just in case they felt pity on us, and decided to bring the trailer round to shorten our road ride.
We had accomplished 8 out of the 13 mile loop... while I do this kind of millage in just over an 1 hour and 1/2 at home...our elevations here, made it slightly more difficult.

My mare was still perky though...with a forward walk..good girl!

We saw a car coming once...a large dust cloud, is what you actually see..then the vehicle ahead of it. Again...I said aloud, " OH! Maybe they sent that vehicle to come get our keys, to bring the trailer round!"
Nope...not this vehicle, this time...drat!
BUT THEN, we did see another dust trail, and a truck this time...it was one of our riding partners to the rescue!!! She and our friends had trotted and cantered most the way back and decided to spare us...she got the keys from me,  and we just sat down and waited!

I was saying, "holy-crap...is that MY RIG cruising at high speed
down the roadway??!!"
Yet, we were all smiles when it got to us!

My friend driving my rig exclaimed, "how much easier it was to go 45-50mph
over the ruts,verses the 30 mph we drove in at"...man! I was thinking, that is my rig and you flew like that with ...then, after we loaded the horses..I found out, she was right! It WAS  a much smoother ride, going faster...so we flew on home and left only dust behind us!

Posted by allhorsestuff at Saturday, July 23, 2011