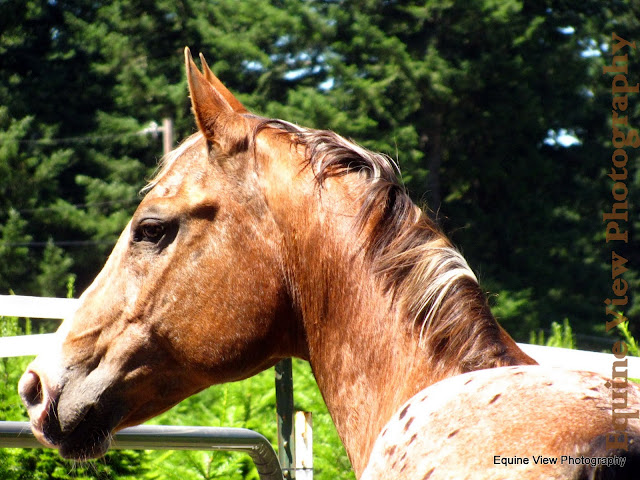 This is Pantz, my sisters 21 yr old Appaloosa mare. She inherited her for a dollar about 5 years ago, the current owner was afraid of her. while my sis is a TB fan of dressage & previously enthusiast/avid eventer, she has enjoyed her very much. They did Competitive Drill Team for a few years and now she mainly trail rides, with me.
My sister moved Pantz to my barn "at the time, late last summer, it was  -way the heck -out in the country.
The mares below, enjoying a romp through  in the large field they had to start with there. 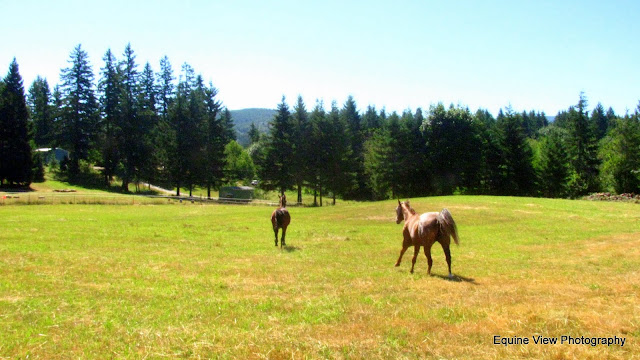 My sister does not live in the Portland area permanently yet...so I looked in on Pantz, as I did my mare and had the privelege of riding her anytime. This was the second time I had had Pantz at a  stable with mine, and it was really fun. 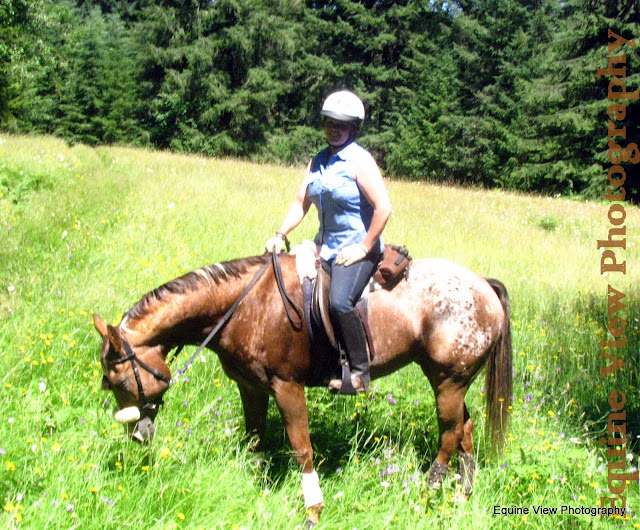 My sis and me would take the mares to all my favorite riding spots, it was so nice to have her there more often, and so convenient to ride together from the barn! 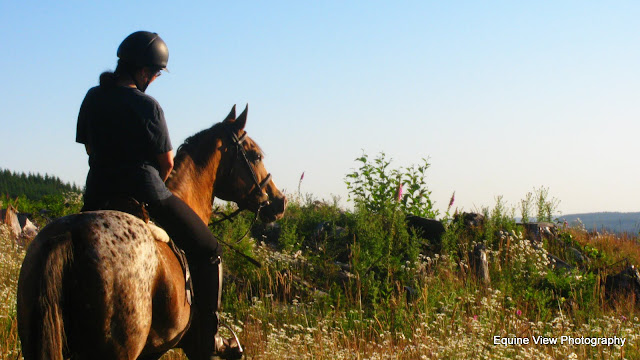 Late in the season last year,  while I  ponied my mare from Pantz, we had stopped by a nearby pond for a rest. I was about to head on home again with the mares. Suddenly- in less than the time it would take to breath in and out-I was heading right for the ground, off of Pantz. She had done a tuck and roll move and was no longer under me, but the ground was!
I looked up once to see the mares standing there...but my mare, was pushing Pantz to go. It was terrible to see them running off and to track them to find, they had done the unspeakable!
What happened the NEXT WEEK was part of the history that lead me to happily move to my current stable. Too many chances for harm, availed themselves-plus- I wanted closer boarding w/arena and other amenities. 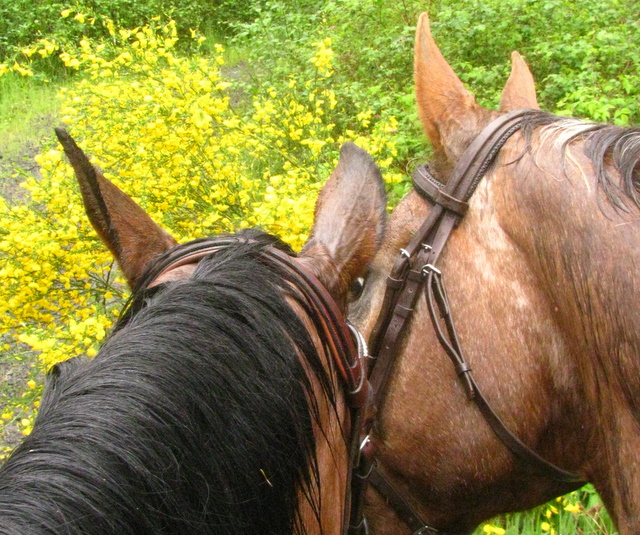 So, it has been a whole year since I have ridden Pantz solo, on the trails. I really did not think about it too much. Lately though, my sister really wants to get her in shape for an upcoming beach trip we have planned for October.  I have endeavoured a few times to go over to her  "new"current facility and retrieve her to ride at mine. (that is another post-"Pantz's move") While I am very confident trailering and riding solo...the doubtful thoughts had begun to hit my mind, " What if something happens? What if she dumps me and gets away again?" It was disconcerting for me to have to face these thoughts. And you know...these things are always present. I, while being confident in my skills and also very safety conscience while solo riding; am able to come off any horse, at anytime and have accidents occur, just like anyone can. But, it was the fact that I came off-while standing still, that had me scared somewhat.
Pantz was so good for me, trailered over to place and waited in the arena, while I got my gear out~
(phone photo) 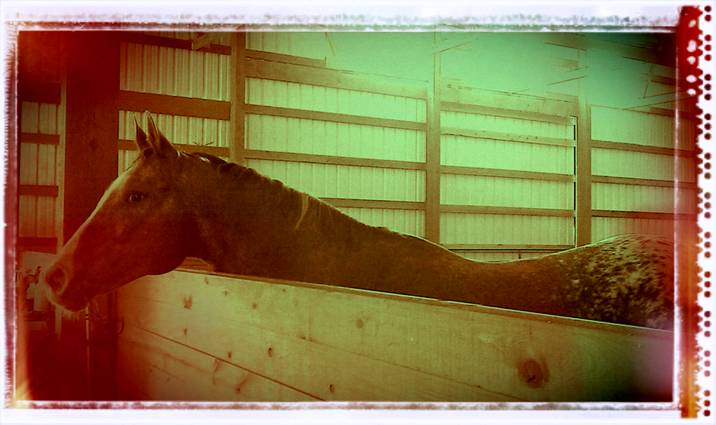 My sissy's place is only 4 miles away. Pantz, she loves our arena, it's so soft to roll in! I set her up with some hay and water, as I groomed and tacked. I did NOT allow her to say hello to her best bud-My mare, Wa- out back in turnout..as I thought it would be upsetting for her. They never saw each other, yet did answer each others call, once. One thing I do know about this mare Pantz is- she takes over and will not listen if she is upset..it takes alot to get her back. 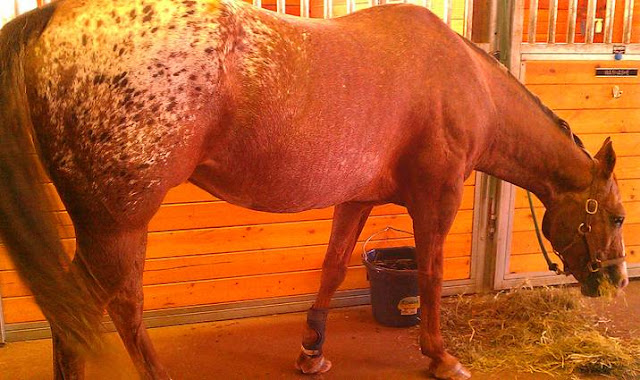 She was great and I only had to confirm who was the boss once or twice..she is such a bossy lead mare...she does challenge sometimes should you waver.
This is something I really caught onto this ride, being extra vigilant is Pantz's thing.... look at those ears below! 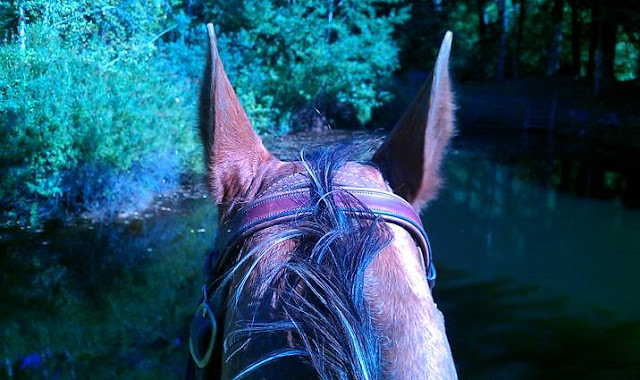 While my mare would be looking over the pond and the ducks and whatever else would be swimming around...Pantz here, is concerned about her back. It was very hard for her to keep her head straight at all...I call her  "Looky Lou". She always has her head craned around to make sure the Lions are at bay! It is really annoying, when You are trying to do something, or get on...she is terrible at being still. THAT is what we practice the most, when I ride her. and THAT is where she dumped me last year..in a moment of still.
Pantz, vigilant mare In a still moment, before I mounted up to go forth... 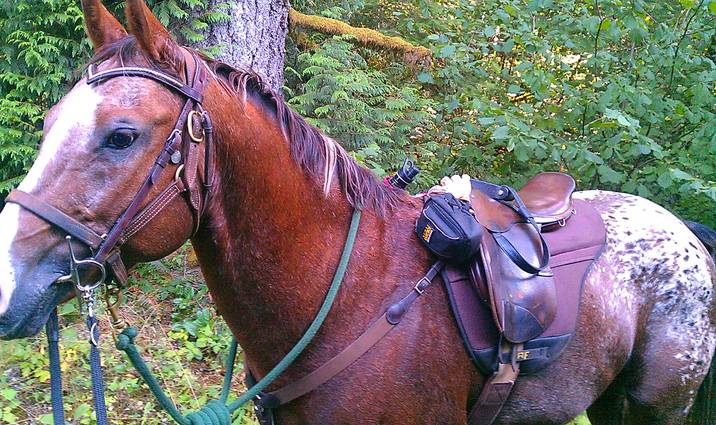 She was happy to be out and took to the trail, eagerly so.
I was  amazed at how quickly she was ascending the first hill- looser rein and no leg (both things I have to employ with mine) when- she spooked! I was not ready..but it was not a bolt or spin, thankfully...it was one of my mare's spooks too....a crouching stump, hidden cougar! Tall grasses hiding a 2 ft stump...ever since last years cougars attack...both my mare and this one, are wary of the stumps!
I don't blame them. 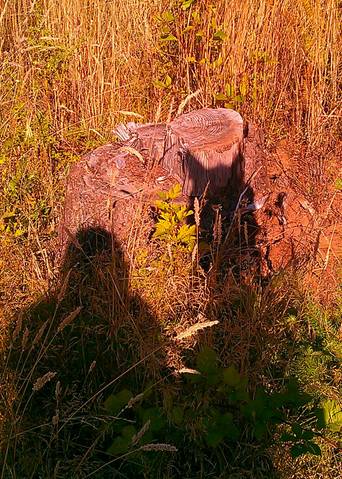 Our ride(s) were very insightful to me...as I rode along looser reined, Pantz did become more aware of things..spooking more often. Now this is opposite of my TB mare..the more contact Wa mare has with leg...the more wound tight she becomes. This mare it seems, becomes less relaxed and more aware, having to take care of things herself on a long rein-translation-LOTS OF SPOOKS!
I learned a great lesson from this mare Pantz...she is confident with leg on, boundaries set and a light and constant contact. She gave me such confidence between the two days I picked her up to ride! I practiced being a strong leader...as we cantered down a road...and I felt her pushing away from something as we neared..I put the outside leg on and actually looked to the other side of the road...wow..she stayed straight as if there were only the middle to travel, instead of jumping to the far side of the scarey object. In this case...an out house, tucked into a campground...we went back to investigate. 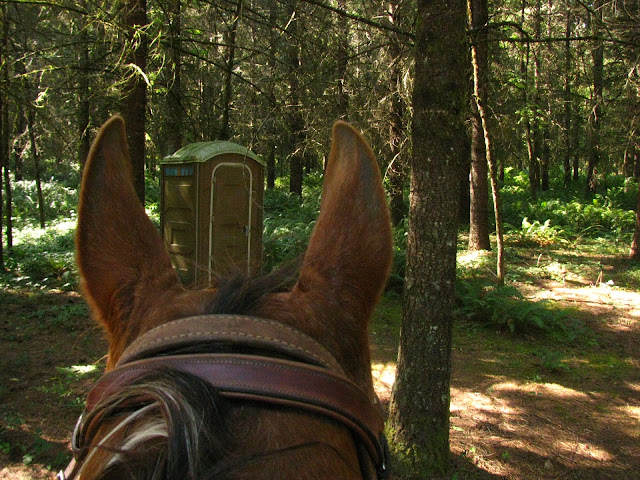 I am happy to have had the alone times with this mare to ride and to connect with her. She has helped restore my confidence again.
I just love you  Pantz! 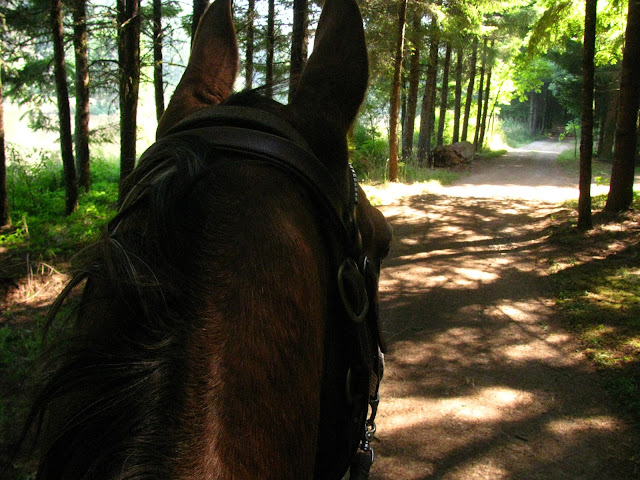 Posted by allhorsestuff at Thursday, September 22, 2011

Email ThisBlogThis!Share to TwitterShare to FacebookShare to Pinterest
Labels: Fear to confidence Pantz