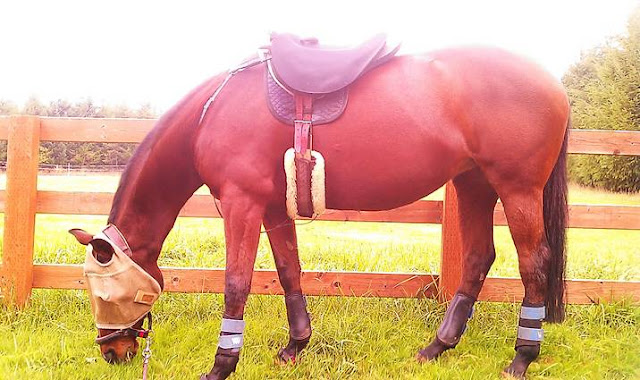 "Falling Back" an hour last weekend, coming out of the daylight savings time, is making  us step up the ride TIMES-in order to not be in the dark.
I readied my mare....and then hurried up to wait for my sister to pick us up.....Wa mare did not seem to mind as she grazed by the drive. It does get dark so much quicker, we had to be on our way home, before the State park we were going to this day closed.

Until I get the" Load leveler bars" installed on my trailer, Sis will be taking us places. I will feel much better about hauling mine, one that weaves if alone making the trailer rock. AND-  safer knowing the ball will never come off the hitch with them installed- for when I assume the care/responsibility for others horses as well.

.. Um...for this sunny weekend -EVERYONE else- had the same plans- Head to the Equestrian park!!! I
While it was still on the crisp side- it was dry! Look at the parking lot...almost full! 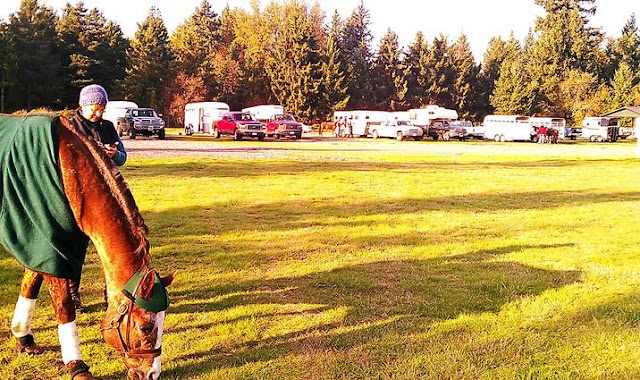 Sunny goodness we've had in these parts of Oregon mostly for November.  What a gift to ride being able to remain dry. Off we strode, on down the trail at McIver State Park. I went first, to start with,  simply because my mare has begun to balk, not wanting to go down the hill and over the bridge. She'll follow fine, but the balking at going first is what I wanted to face today with her. She and I were riding with the cushy bareback saddle and she was booted..so aside from maybe a little stiffness, no pains coming from tack... (no excuse!). 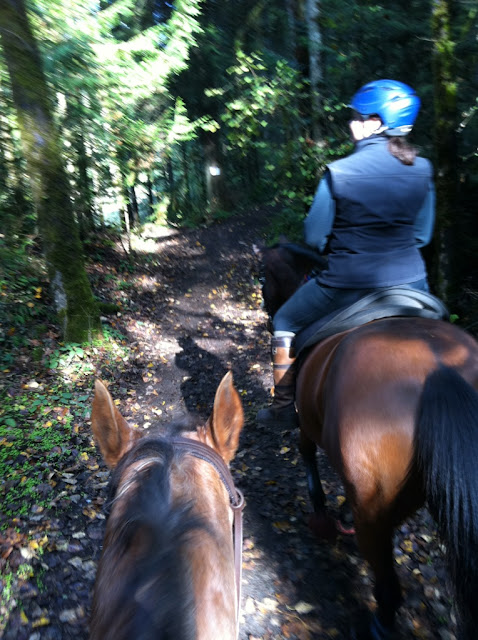 It was GREAT to NOT have to wear our BLAZE ORANGE vests and neck covers on the horses!!! I do love seeing my mares mane and neck. But untill our hunting season is over, riding here in the horse park, will be one of the only places I get to see her naturally.
My "Turbo Trailrider" stablemate took this the day before, from her phone~ 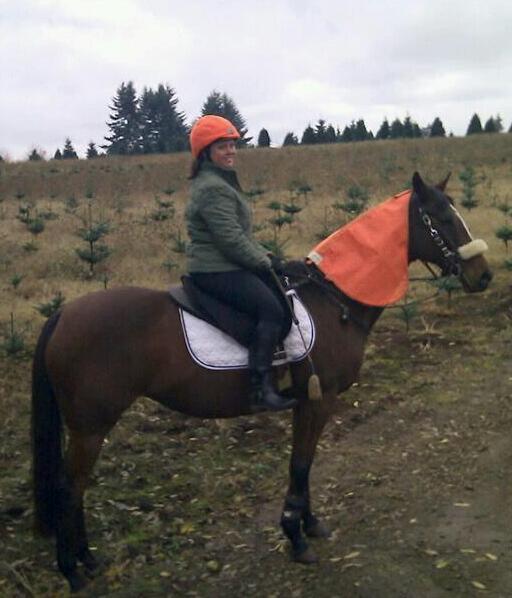 Most the times I have ridden in our local horse park here, there can be a full parking lot like it was this day, but you hardly ever end up seeing many riders, for the vast space the park offers. It is kinda cool. NOT the case this day for us sisters...we met with many various riders. I normally execute a yield, as my mare is "personal space challenged" and can intimidate other horses with her uppity ways. 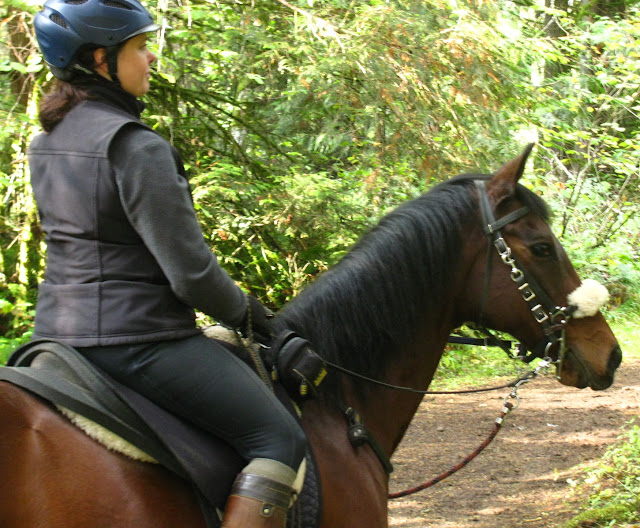 I never wish to endanger anyone over right of way..so, if they have not thought to stop out of the way on a narrow trail, I make sure I have myself off of it, and out of the way for them to pass us by. We did this quite a few times, with willing steeds and no incidents. Sometimes people thank us for yielding..sometimes I thank God-  I did it -cause they amble and allow their horse to reach out towards us or even get close enough to touch.
I'm sorry, but to me this is not right( unless they want to get in a tangle of hooves) and so I like to take charge and get the heck out of their ways!
My sis and Pantz mare lead the way mostly, while I made sure my mare had her attitude for leading in check. She was pretty great this day. 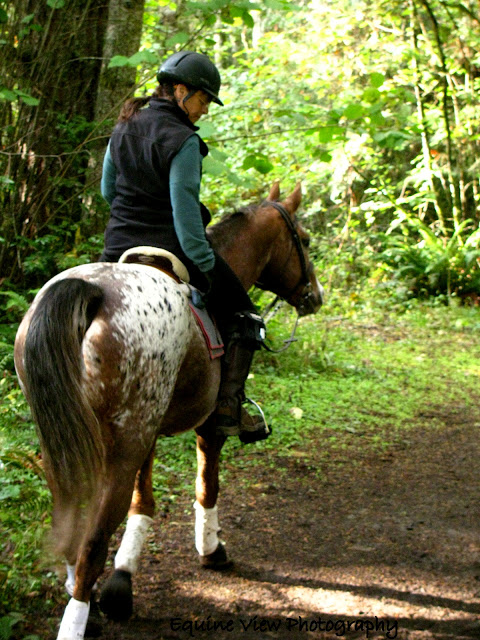 Down by the river, we paused for the watery sights below after we had trotted the straight "Dam road", to the end. 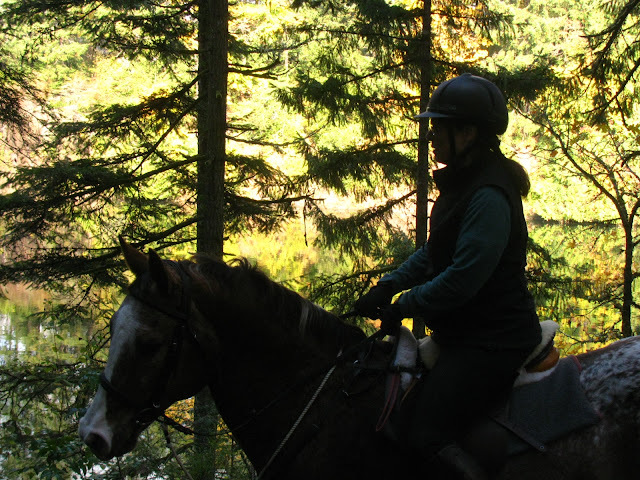 Pantz was good today mostly, but once I headed back to allow others to pass or went further away to take a photo...she'd get uppity and not stand for my sister. Pantz rarely stands normally anyway. My sis  and I have plans to do some training next time out for "coming and going- away and back" with these two horses. Mine could care less to head away from Pantz...but Pantz..ooou she flips somewhat. 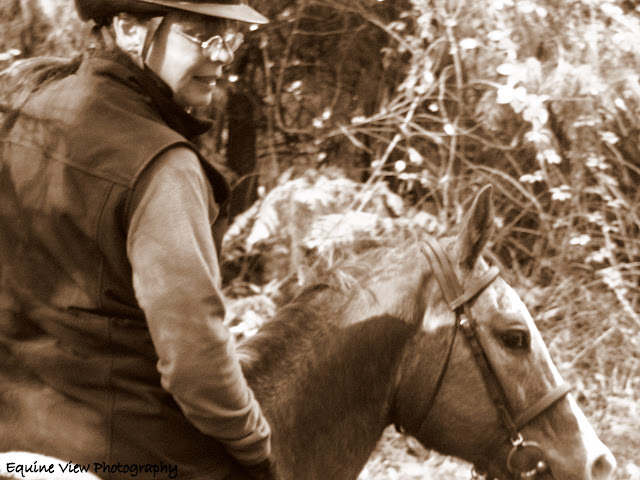 My mare's issues stem from a nervousness with new horses. I mean-remember when there was that new horse, "The RED HORSE OF DOOM" I called him, at my stable for a few weeks, while the owner was selling him-??? She was beside herself and he was not ever close to her. So my point is...she just has issues with strange horses..she takes it personal if they look at her and she can be a handful. I would practice calming her and having her behave while around them...but they would not be NEW would they if I could practice with them!
So, this day...my sister was on me about my attitude and the way my mare acted around close encounters on trails with strangers. To me, I have overcome SOO MANY obstacles with this mare and to try to make her walk calmly ,closely by a new to us stranger..is asking alot. I would much rather yield, as I said before..I KNOW how that situation ends up like...safety and a controlled environment for all.
So Once -I listened to her- actually just got guilted into keeping my walk pace up behind Pantz as we passed some strangers on the trail..their side was cliffy, ours was on the upside. Then, what does my sis do??!! SHE STOPS..CRAP-OLA...! I said, "Hey, don't stop please!!!  But, it was too late, my mare wigged out and began to canter in place before I could turn around...those poor other riders! The first horse took her at her word( her bad evil eye going out towards them) and began to act up himself, wondering where he could escape to...it turned out okay, as I made her go by quickly but...after apologising profusely so to them, I told my sis, I would not do that again!
We chilled out for a second and then resumed the end of our ride that crisp Fall day. 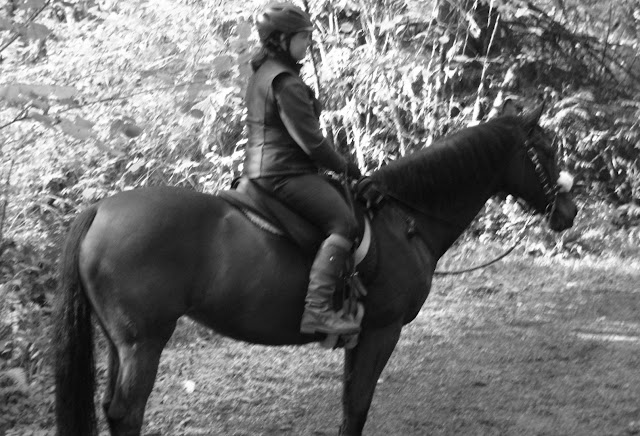 My sis was mad at me, telling me I brought it on somehow. Well, here is where I differ greatly from her. I rather think I'm a realist and though sometime I may try to change a situation and turn it into something else..I was So NOT PREPARED to wing it today- and knew I did not have permission from the strangers to involve them in my training issues of a hyper-sensitive- TB mare!
So all that aside, we did have a great ride...the mares were relaxed and though we canter twice ,for like 200 feet, and trotted up the "Dam Road", they were very wet for thier winter coats are in. So we put theirs coolers on them for moisture wicking as they mucnched grasses. 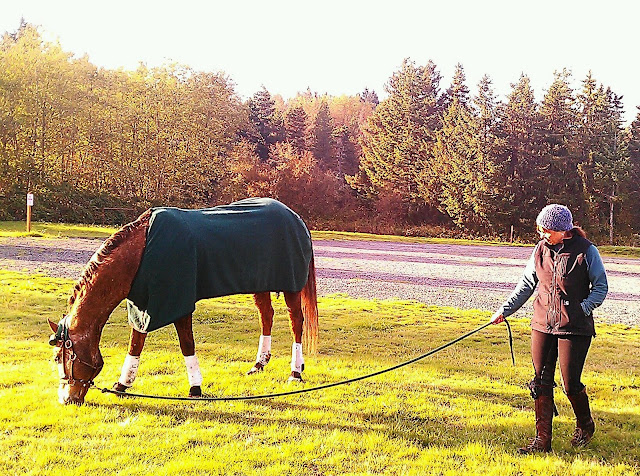 We also made a plan for the next time my siter is in town...days from now, to have a "clipping session" for both the mares. I have had to towel mine dry several times in the past 2 weeks for not wanting to put her blanket on over wet hair.
So...trace clips it is...I am excited, I alway love how they look -and-
love how they work, even more! 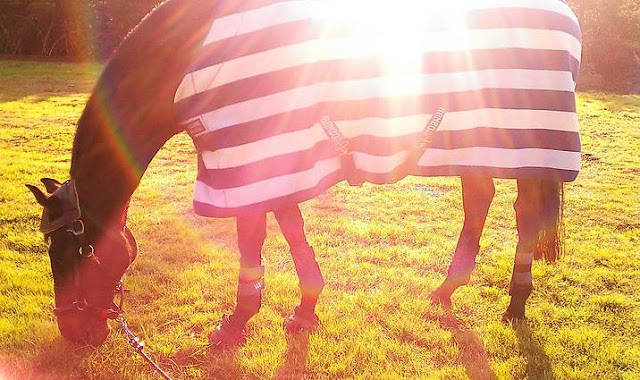 Posted by allhorsestuff at Thursday, November 10, 2011