The mare and I have had the pleasure of showing a new boarder at our stable the trails.
This gal is bartering for board at our Private Barn, with her husbands talent with being a farrier.
Her husband did the hooves of the 3 Morgans at my facility, last mo.

This cute little 5 yr old horse, she started at her private arena nearby. Yet- she has no access to trails Hence- the perfect situation to barter for some experience riding trails here.
He is a Iberian Warmblood (Sorraia cross Paint)
His name is "Certain to Impress"-spelled in Portuguese. His human partner calls him "Certo".


I decided that Romeo would be a good horse for this new venture . . .  I thought wrong!


Romeo is so herd bound that he was nervous and barely would walk...but did a jerky jog/jiggy thing...ick!
No matter what I did..he neighed constantly so, and would not walk...surprisingly...our first ride went okay...even though ~
Our only hitch was the gate to the service roads at the end of our no-outlet road. It has some darkened soil, mud almost dried up, that bothered him. He tried to skirt it dangerously, over a boulder. She dismounted and I tried to pony him (why I took Romeo in the first place..to pony if things got weird.)
That too did not work, he kept trying to go over the boulder. We  then went to "unplanned C" go up the private driveway to the woods, and make a trail through it= quickly!
We were off and walking down the sunny road, soon! 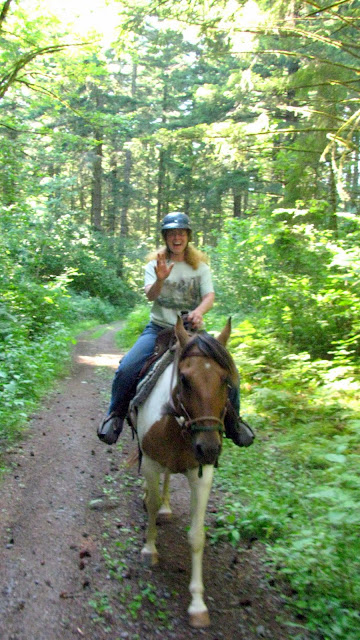 We had a nice first ride...with just a few jumps off the trail, by Certo, to avoid mud...he definitely has an opinion of mud. Romeo gave me his worst ride to date on the way home...jolting and rough.


Since my mare has had her fly sheet in a wad, since this new little horse "Certo" arrived at our barn, and
she was recovering from her Trials on the Trails, over the weekend last...I decided going ahead of a newbie would not be a smart idea.
After that first ride on Romeo...I NEW I could TRUST my Little hot headed Thoroughbred mare  to be a better mount , up for the task of leading calmly.
And, it is a training ride all the way around...me keeping her calm and requiring her to be a lady in front of this new-to-the-trails 5 yr old.
My GOALS:
Keeping a checked speed, stopping for nice calm "standing -waits", before walking on again, doing some  circling of the new horse,Clearing trees..all of this and MORE!

Our second trip out proved to be*** MORE exciting than the first!
We started out much better....Certo had had some ground training, the day before, at the gate. His human partner lead him to it,  sprinkled some grain treats on the ground he was afraid to tread upon. He stepped willingly upon the feared areas, nibbling as he did..till...he was all the way through it and had not a thing bad happen!! He forgot to spook, so that was that.

He was very good this day behind Wa mare...and she was not bad either, allowing me to tarry for the traditional photo op! 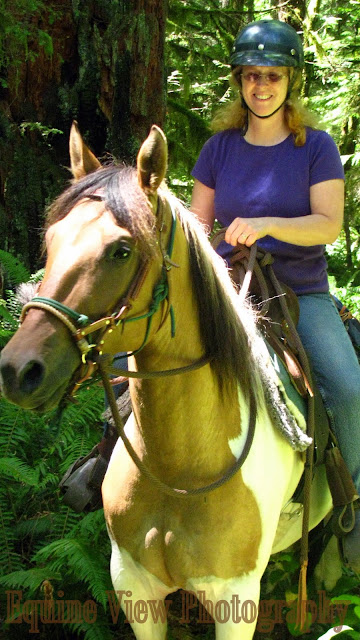 We had stopped some and I had cleared trees and branches and spider webs (not intensionally so!)...we began our downhill journey and I started to tell a story about a time while riding in this exact location, only once out of the previous year worth of rides , a small band of horses had run up to the fence, from the shadows, and it was a spooky thing...then they ran off.

As the words left my mouth...IT HAPPENED AGAIN-TO US, Right then!
***Whoosh and whoosh and I heard an "Oh  SH - Tttt!!"
My riding partners young mount thought he may be eaten and bolted, as well as Wa mare for 2 strides. Then  I turned her to look at her seemingly attackers...
while she stood still...Certo still went ahead with his bolt, wayyy too closely-on-past-our-hind end! She was good, not to kick out.
3 horses had come running up to a fence that was 10 feet away, out of no where!

This is what happened to me before with my mare, but since I was talking about it...my voice masked the subtle -beginning noises -to our horses- of the other horses looming nearby!
My friend jumped off as soon As Certo stopped...he realized that Wa was not with him and his rider was asking for stop!
Whew...that over, we walked on the ground for a time to get all of our adrenaline down again!

No problems...soon we were on the horses again..riding towards home.
Bath time ensued our arrival at the stable. 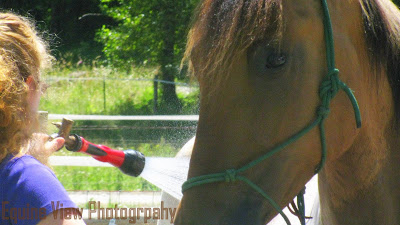 I soon realized...after taking my saddle off...oou!
I had an UNWELCOME (by me) stow away on my seat fleece..with his prey! 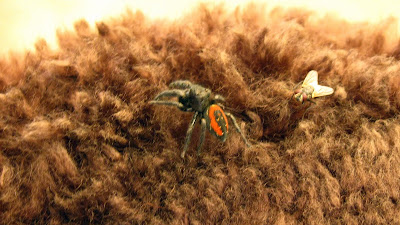 He totally freaked me out!..What kind of spider is this?!!
THANKS JENI..I think you are tight in identifying her!)
I am wearing longer sleeves...on my trails outings in the future!
He was not long for this world once I discovered and photographed him...ICK.

OUR third ride was really great...
we had left the horses in overnight. Washashe mare next to Certo..she was telling him what for the night we left... squealing and tossing her head, being aggressive.
When we arrived the next day...they stood quietly together...by the outside gate, separating the paddocks.

I had decided to take a different route..one that was calmer with no mud or running horses involved...up to the rock wall and creekside road we went!
This ride afforded me a training situation for my mare..side by side riding.
She needs to get over herself and her personal Space issues! I love this little Thoroughbred mare of mine...she does so well sometimes...gives me hope!
She walked nicely by her young follower...giving him a chance to experience the view of- almost leading.

I then asked his human partner to go ahead for a photo...(and not thinking of anything but that..she got him to lead the way and turn around willingly!) Success, on many levels we achieved !
I had one riding challenge that the mare presented to me, a sort of STALE left over she learned from our Trail Trial last weekend...balk and get a pass to comply- NOT!
She asserted her will and evil eyed me, as she hopped up in the front end, as I asked her to go forth on up the trail. OH! I jumped off so fast..she new not what hit her!
It was my crop-on-her-but!
I circled her...then, since I had my bareback saddle and no stirrups...she had to comply going forward, and on up the trails...pulling me behind her with her tail...that was a good workout for the both of us!
All in all...an excellent ride!


Until the 4th ride out , which will be leading the new horse to a creek,
goodnight sweet mare of mine~we begin again after a time of rest~ 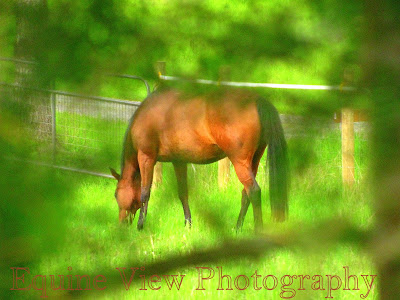