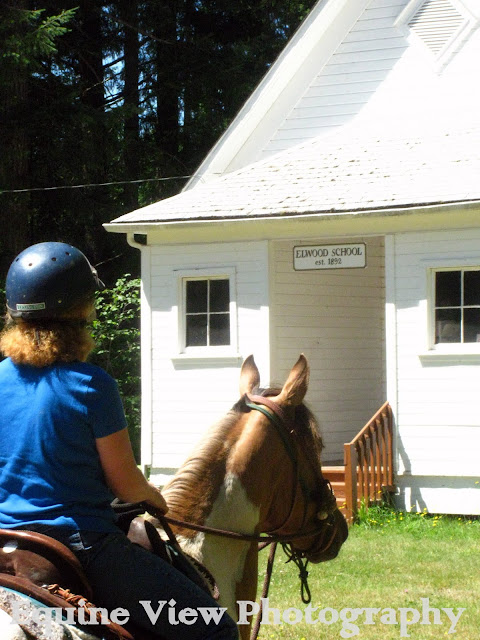 For the past months, my sister has been considering moving back up to Portland area to live with our mother. And of course, that means Pantz, her  Registered Appy mare would be moving in with Washahshe.
We are giving it a go at my boarding barn, as my sissy had a little time off and her self care facility leaves her no option for being away...
Pantz is here! 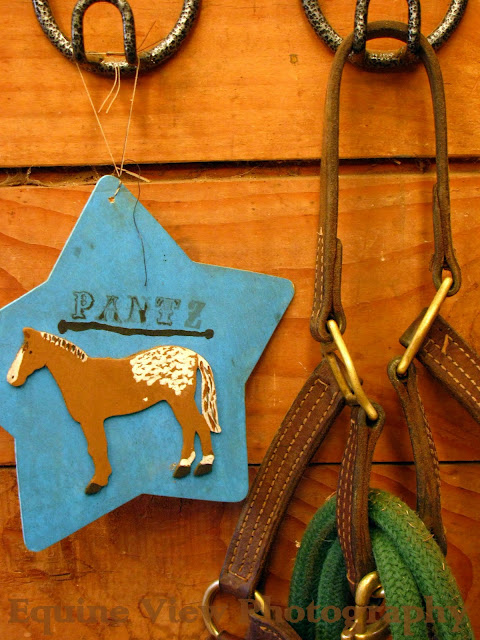 I just love this mare my sister inherited for a dollar- (Yea $1) 4 years ago. 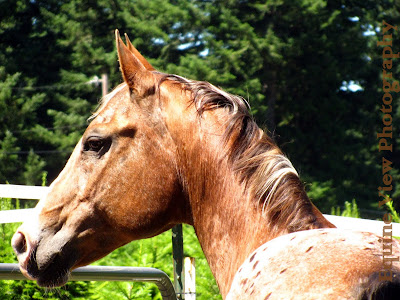 Sooo, we have been riding and riding together...giving the mares a day off in between ventures out and about. I have lots to share!!
Yesterday was the first time I was able to ride Pantz, my sissy left the day before.
I called our other boarder and said...lets train at the creek!!!
Since Our summer temps have been like most (save the humidity!) at around 100 degrees of late, we went out in the morning and into the shaded woods. Aiming to take Certo, the young 5 year old Sorraia/ Paint, to one or both creeks on the 80 acres next door.
I can pony off Pantz...she is so good!
I went ahead and fit her for the Bitless Bridle (thanks Jules) I am borrowing still. I think she will enjoy that, I know Wa mare does!
Well, the first creek that has a bit of mud and a decent involved...Certo wanted nothing to do with. His owner dismounted to allow me to try without her firstly.
He tested me HARD- by  trying to get away, by ripping the rope out of my hands...or my arm off..one of the two!
I decided, after getting a few calm steps toward the creek and praising, we'd go for the other creek and leave this one for another day...and going towards home next time!
We walked around and about- on the line- before attempting the creek. It was mostly dried up and rocky..but he could see the pond on one side and hear and see the water on the other.
I established my "ponying boundaries";  stay behind or at my shoulder, do not go in front,  halt when I ask, back also,  move away from us when we move into you, and if you balk...the pressure will build-till you take one step with us.
Young Certo was awesome- mostly... 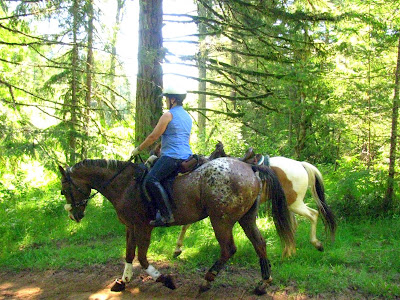 He complied with all my standards willingly..then when it came to the creek..he started to balk again.
I told his owner to lightly toss pebbles or sticks at his hind..making it uncompfy from behind... just a second of that...he walked on! 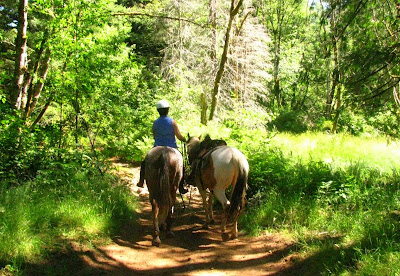 As I neared the creek..I employed the "ONE STEP AT A TIME" routine I use on Wa mare, when she gets hesitant. One step, I stop us and praise.. another step- and so on...
Praising the sweet Certo~ 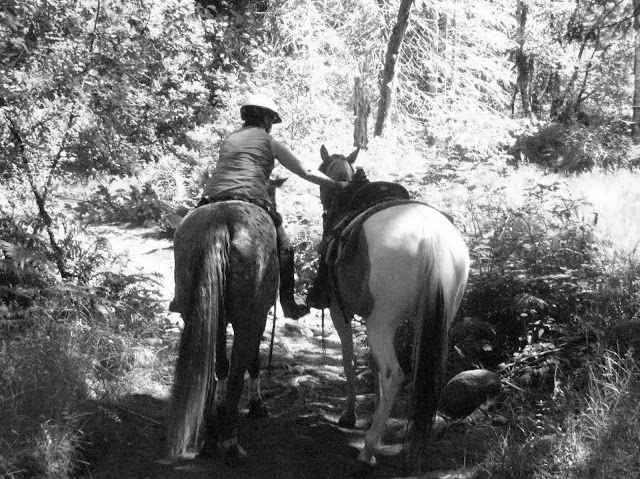 We made it across, with no frantic leaping or any other hesitations! 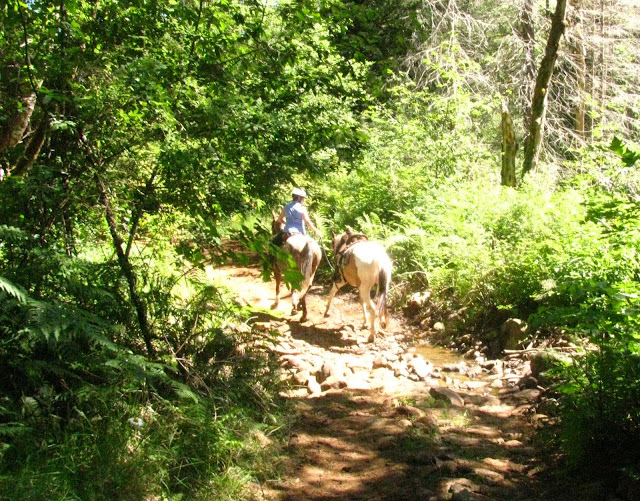 I traversed the rocky creek with him several times, before his girl remounted and rode across herself! 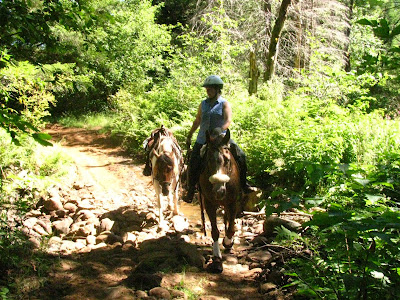 We then went forth for a bit of a longer ride...but before we could leave the woods..there was a rather large, watery, muddy tracker rut  across the road, where the creek runs over it.
Certo again was fearful.
We reestablished the ponying line..and his rider and I attempted the muddy road...he did it..but before he could step out...I quickly turned around and we went into it again..then again and again!
We stayed in the water and mud till he cared less!
His cute rider said, " I feel like I have training wheels on!"
We had an excellent little hour and a half ride...going past the Old school...Perfect THEME for the day's events! 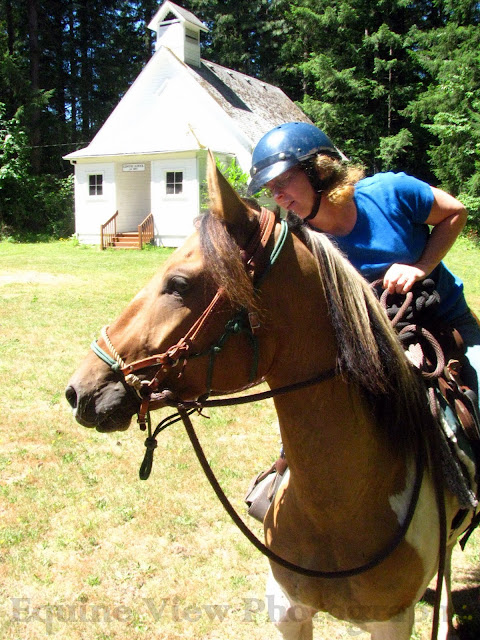 Then Certo lead the way for a time...back towards home again! 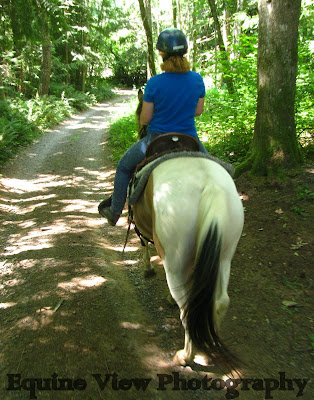 Stopping only in the meadow, for a sunny photo.... 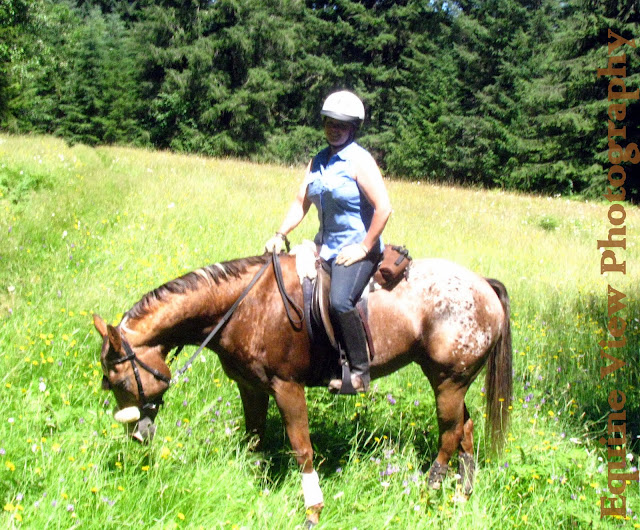 ......and time to praise the young horse, and reflect on the efforts he made! 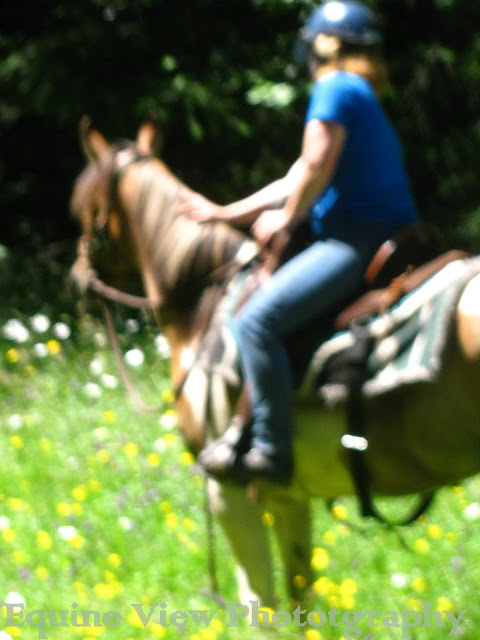 Email ThisBlogThis!Share to TwitterShare to FacebookShare to Pinterest
Labels: The old leading the young