Fall is showing herself 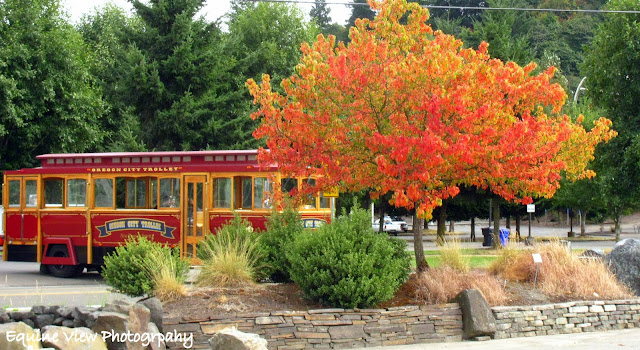 My husband and I got to work on a project together of late... while we were gathering  up some Basalt stones, at the local Landscape supply, I looked up and spotted  my first glimpse of FALL!
The Oregon City Trolley, was appropriately colored to match.
Last week was super busy again..I only got to ride the weekend a little. It was the first riding I have done on my 3rd set of EASY WALKER horseshoes.
Plus=Wa mare had to heal up from the Hock injury.
So my sissy came, and we rode 3 days.
To my dismay...found that my shoer has really skipped town, in the professional department.
At a suggestion of someone, I asked for the "clips" not to be applied to the EASY WALKER SHOES. WRONG...I should have watched the installation video again before I took that advise... and the E.W. Web site recommended shoer for the shoes,  should have too...
No clips at all =It is not recommended for the riding I do. The clips really help the stability of the shoes.Only the toe clip can be removed for breakover and the side clips should remain.
AND, since he does not use the recommended equipment (he seems to have an answer for all my queries on this issue too) he is unable to actually SET the nails into the shoes.
THIS...is what I got, after the first ride..to my great horror!
Raised nails!! 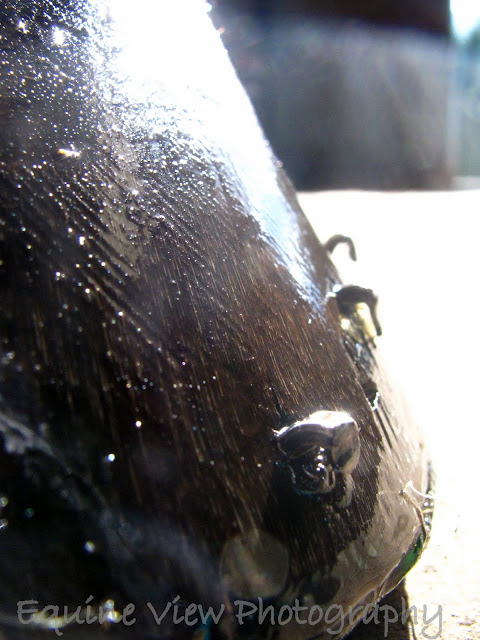 I have called the shoer man TWICE...no answer.
I mean, I asked for the clips to be left off, he is not at fault that way...but not knowing why I should have them ON and Not bothering to call me back, totally inexcusable!
I got advise from the dealers and have remedied the problem, as best I can. I have bell boots on the mare still...for the stupid unclenched nails are sharp.
He is so fired and reported too...called the Canadian dealer and will contact the American one.
He should NOT be on any recommendation list for the shoes.
So, that ill said...I was able to go out to the barn on Wednesday last, for a small ride on Pantz...and I ponied Wa mare.
We passed our herd on the way out. 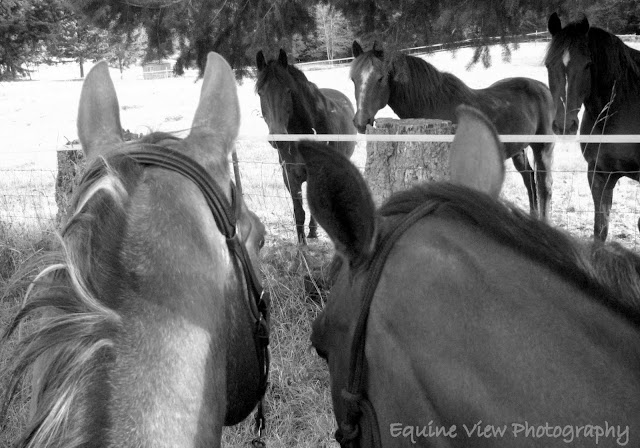 It was such a refreshing little ride..the weather had given us a BLAST of HEAT WAVE again..so I stayed to the forests.
I made for home, after about an hour and neared the neighbors pond. We stopped there.
I took a relaxing deep breath, as I watched some ducks swim out to the middle of the pond with their babies...wondered if......... Pant.....z...z.z.zz.z.z......OH!!!
Pantz suddenly levitated south...I stayed north...I mean, it totally happened so fast,  it felt like someone pushed me off the horse!!
I flew in slow motion, the few feet to the ground...opening my hands breaking the fall...oops letting go of Wa mare too.

It took me, a minute to get off the ground.
I looked up the first time, to see the horses wondering what to do..but Wa was persuading Pantz to move away...the next time I looked up...they were gone!
I called my Barn owner...she called her husband and said, " they'd come out to look for them."
I tracked the hoof prints back....oh! They missed the first turn home -up the trail....
Oh! They missed the second turn home, up the trail...and to my great dismay, the hoof prints got father apart and deeper...meaning= SPEED=
Yep...speed, and now going towards the road.....
My heart totally SANK...I prayed out loud for them and the situation.
I made it to the road...and saw the storey unfolding in the hoof skid marks....Wa knew it was a left turn..Pantz did not...so I imagine them colliding...Wa got the worst of it...I saw herflesh and reddish- brown  hair, from one side of the road to the other, barely missing the wire fence on the other side.

My water container was smashed...and on the ground..tea bags here and there...lid...I looked up the road to the left and to the right...poop I see POOP!

Up  the right direction!
I had terrible walking boots on..made for riding..not walking!
I had a mind to take them off...I could barely get going up the paved hill..then, My Barn owner drove up and gave me a lift. WHEW'''
They were in the stalls...the barn owners husband- bless his heart- caught them, put them in. He was breathing hard and said not a word about the horses having injury.
(for some reason I think people look for injury, automatically-like I do)
For some reason, I was worried for Pantz more...I looked her over...she had one scrape and a skinned nose...by the looks of the reins...she did bite it, in the dirt...up by the attachment of the bit less...was embedded soil and brush.
She would not take and apple or carrot later.  checked her teeth...no blood, all there.
I decided to get back on and go back to reclaim that POND area! I took 10 minutes to do that...it is close. 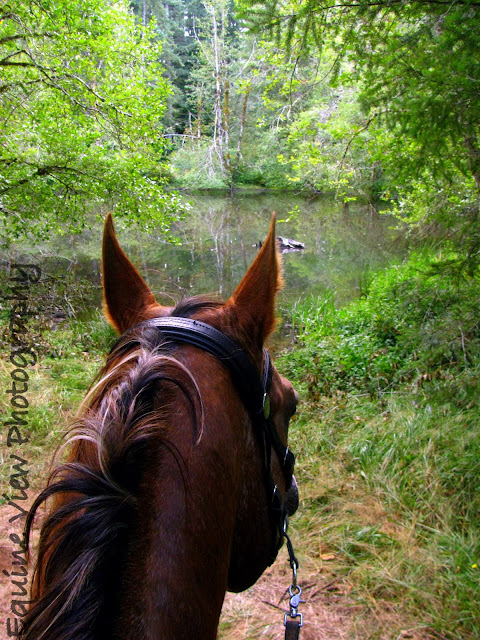 Getting back untacking....
I went into my mares stall to take her legs wraps off......OH HORROR!
I can't even share the photos I took with you  friends...Bloody mess of her knee and elbow, her Stifle had a   golf ball sized CHUNK- right out of it!

I don't know what I thought...not checking her too, right away.....I think now I thought the barn owner, that put her away, may have said SOMETHING! Guess he did not notice.
She was stomping and tossing her head..pawing in pain.
WA mare...I felt terrible...called the vet straight away.
Since it was late and he was on call...I took his advise and gave her Bute and no grain. I stayed for a couple hours to make sure she drank and did not go into shock.
I gave her Anica and Rescue Remedy in a handful of oats...As she was wondering,
"where is my grain?"!!!
I sprayed the wounds with a soothing cleaner, that numbs it a bit...but there was nothing in them at all..totally clean.
Small miracles..and answered prayers all the way around!

I thought of poor Teddy Pony...owned and loved by Olympic riders, the O'Connors. This wonderful eventing pony;  he had an unfortunate accident, right on site of his stable by getting away from the handlers.
He had to be put down...that day, for the extent of the injuries.
I was thankful...so thankful, Wa appeared to not even be lame...just SUPER SORE. Pantz too.
Next morning, I called the vet to come out...the skin around the areas needed to come off.
Without sedation...there was NO-WAY I was touching it!
He came on out and sedated her, clipped off skin and hair from the 6 sites of injury...scrubbed the bacteria right out of them..and even with sedation, she managed to protest for pain...poor thing.
She is on SMZ's for 14 days...I am to wash the wounds, then put appropriate cream on them.

It has been  days now, and Wa mare has been wanting to go out to fields...but the stall and runs have given me a way to heal her  faster...no dirt!
She sometimes gets a shaving or two, in the only remaining wet, open stifle wound. But allows me to pick them out..
She has bee SUPER GOOD PONY for all this!
I did let them out finally...for a few hours, in the nice grassy field...no dirt...it is not over grazed like the other turnouts.
She trotted and cantered a bit..tossed her head up in approval of green grass and movement that felt good to her!

So whew!!...I am super sore too. I actually had gone to the CHIRO, that morning...felt like a million ...
Now I go to  physical  therapy tomorrow, and will make another bone apt. soon.

All in all...am freaked at how easy things can go south....how fast trouble brews sometimes and amazed at how dangerious this horse back riding can be.
I have renewed "HEALTHY FEAR AND RESPECT".

One thing I MUST do now...is make a laminated " EMERGENCY CONTACT CARD"- for my horses saddle . If this ever happens, and I am not around when someone finds her..I want them to know WHO she is, WHERE she belongs, & her vet!
After these recent events and because,
I noticed a flyer on a telephone post recently....LOST HORSE- like 2 months ago...It is STILL lost, in some of the woods I have ridden in the area. How totally scarey!

So...with all this news of the downer sort...I do have some really cool news to share too~ Next Post!
Posted by allhorsestuff at Wednesday, September 08, 2010