Healing myself and the mares

I have to say, that healing me , my mind after the last 2 incidences, has come with difficulty.
My mind has been shaken, with coming off Pantz and the Cat attack on the horses.
I had kept the mares in the open Stall/ Paddock runs for 6 days...hand walking them  daily and taking them out everyday. 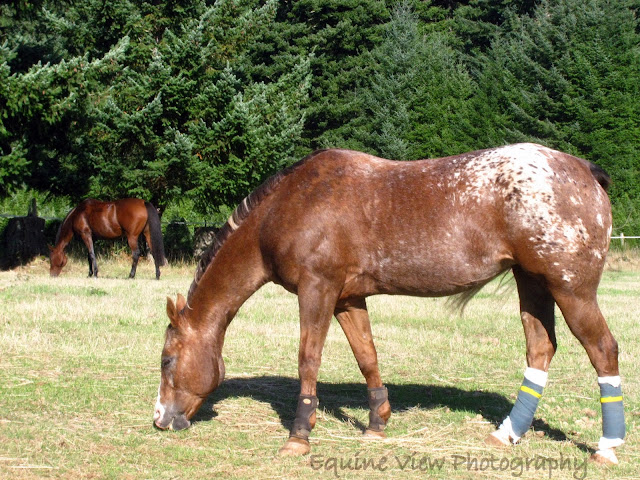 Using liniment and massaging them. Poor Pantz's hind legs  have stayed so swollen. She is off her feed and is seeming to be depressed.  It reminds me of when My sissy competed with her...she got ulcers. She is acting a bit like that, again...very worried mare.
So, I was afraid for them and I did want to put them out, in the fields again. Wa had open wounds still, and that scent of blood from the road running incident may have been what attracted  the Cougar in the first place.
It means "weakness" to a predator.
I have a new thought about the "Original Spook"-  weeks ago.
Pantz mare can be spooky sometimes...she sure had been with my sister and I, days before she dumped me in that VIOLENT spook, that made me loose the both of them.
THAT is what I am remembering now...how the mares really wanted to turn and run a few days before, on a ride.
They absolutely WOULD NOT CONTINUE down a trail, just a few miles from the pond. My sissy was almost unseated then.
Could Pantz and Wa mare smelled the Big Cat Predator then?
I am believing that more now...it may have been moving through the area...and I unfortunately, chose to ride near the pond that day.
Ducks may have caught Pantz's eye...but the SCENT of an animal, altogether different, made her whirl and dump me!
6 days and nights later....I conceded to allow my PBO to put the mares out to field- BUT- NOT the same field of the attack. It is too close to the woods and smaller.
So-Last Tuesday, she was walking them out of the barn together. She probably thinks differently now about what she chose to do with her truck with  a horse turnout blanket hang drying off the end of it...
WA mare went BALLISTIC!!
She saw that form- 3 feet off the ground- in the direction of the woods, and reared and whirled around the the right and to the left.
My PBO said she was thankful I had done so much round work with her...she kept out of HER space as she tried to flee.
My sissy and I came out the next day, to tend to them and  maybe get them out for a small ride. We noticed Pantz was really sullen as we tacked up....
Sweet Wa mare...looking at me always.."Whatyadoing KK girl??" 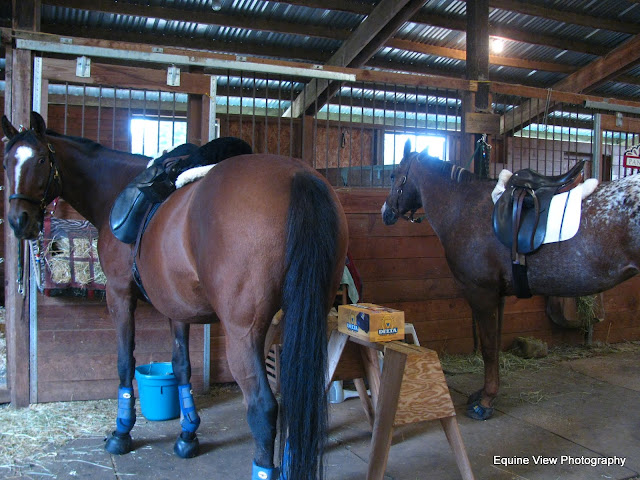 We decided to take a short version of a ride...just to stretch their legs...WA was not wanting to go down the hill and kept the halter on her ..I suspected 3 weeks off may be like this.
My sissy ponied us for a time. She was very groany, and unwilling, as we went down the hill. 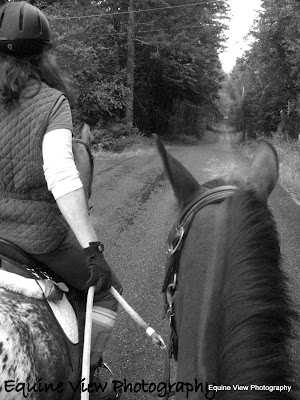 Pantz was REALLY , REALLY OFF. Short striding in her hind. When we returned, 20 minutes later she would not eat anything we offered her.
We put them out to field,  for a time, after liniment baths...Wa mare prepared a spot to roll for herself...
BUT- after much toil and going down to her forelegs, she abated trying ..for it must have hurt too much to release all the way. That was going to be rolling on her road fall side.
She got up right after this move- 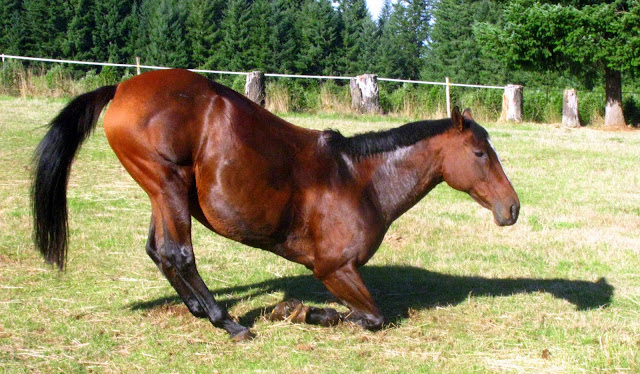 Poor mares..they are still very much affected by the incidents....
Healing continues....for me too.
I have NOT wanted to ride alone..on either one. I stopped by the vets office today, to hand in a release for Wa mare...in prep for our move on Saturday to "PAINTED FOREST STABLE". The gal that was at the front desk told me a story about a Cougar in her driveway...she is less than 20 miles away.
And visiting my new BARN today...the owner said that her friend that lives in a nearby town, has shot 6 Cougar this year...and was stalked yesterday, on horseback, by one!
Okay, I am looking forward to a covered arena and riding with others this fall...my exploring times will be on hold for some time...
More time, for healing.
Posted by allhorsestuff at Monday, September 27, 2010

Email ThisBlogThis!Share to TwitterShare to FacebookShare to Pinterest
Labels: Healing MOVE to PFS