...You can stretch right up and touch the sky... 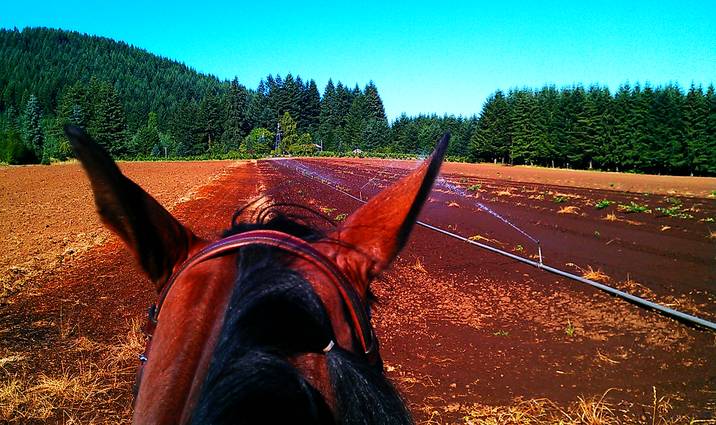 Considering a path through the sprays....
Do dado Cha - do dado Cha-
"In the Summertime, when the weather is hot, you can stretch right up and touch the sky-
When the weather is fine- You got riding, you got riding on your mind !"Have some fun, take a ride, go out and see what you may find!!" (Lyric change-mine)
It's a fun memory song from the 70's...never knew what the lyrics were till I sought it out recently,on "You tube". They were not what I expected. Still, I hum this song, "In the Summertime" by Jerry mungo and now, think of riding and sprinklers!

The mare and me on a hot summers day, went up to a nearby Farmer's field. It has a nice, soft footed sawdust track around it. We have hand galloped this track before, and the mare really loves it, even to gallop on past the trail home, she'll keep on her highblowing pace-to gallop on.

This summery day in the warm goodness of it, we came across about 21 large, sprinklers... the path we normally take had overspray happening...and to veer off, was not to be done into the harrowed, soft dirt to the left. So we considered our path to take,   watching the timing of the spriknklers. The mare was alright with the varried voices of them all. Some  with a lower tone, as the water leaked and sprayed  water randomly, out of both sides..spraying us a little. Some with a higher pitch and quick to come around towards us, in watery spraying.

After watching the patterns for a time..I asked the mare to venture forth.... 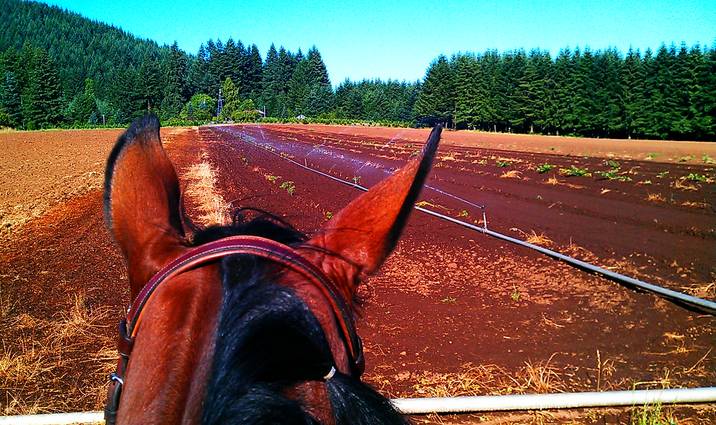 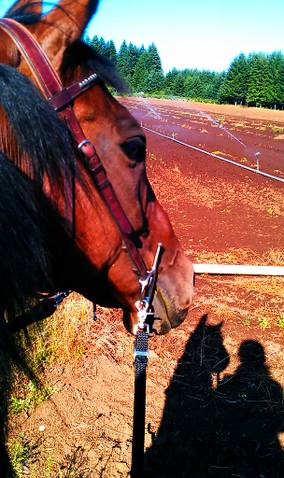 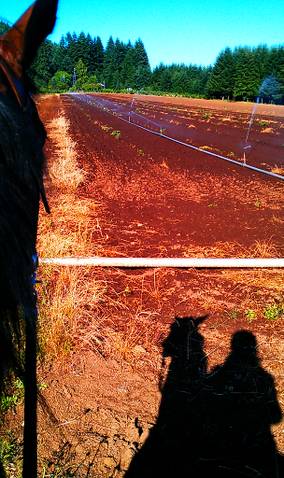 She was so good to try for me, not balking but pensive somewhat. I imagined us trotting through-no matter what spray occurred we'd keep on keeping on...well, that was not the case this first time through. We started and she was fully aware "WHERE" the sprayer was going and when It started to come around behind her..she definately wanted to keep moving forward. So, after we had entered the 21 sprayer lane of cross firing water jets...um-there was really no turning back!
I kept my wall leg on, so she would not evade or side step to the plowed part of the field on the left.  I also had to have a short cross for reins, to keep her from bolting....all in all she was pretty centered and looking ahead to the next. In fact we were almost through all of them and I had that feeling- that it could have been a disater- but had turned out nicely. THEN, she spied something at the end of the field (farmers equiptment) and thought to stop moving through. I said with a confident squeeze to both sides at once, we are still going to ride on!
We made it to the other side...ALIVE!! 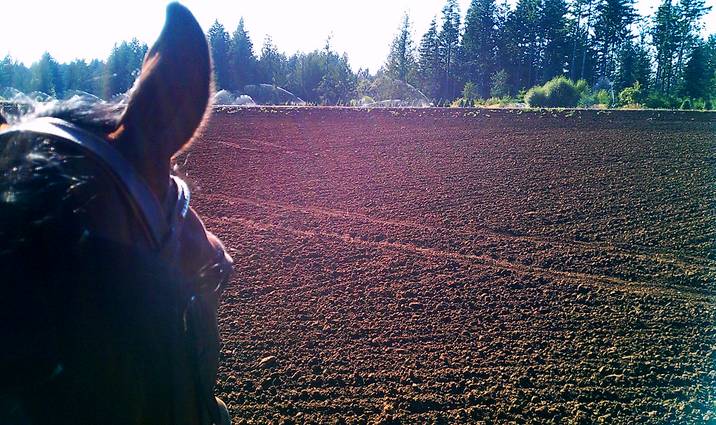 It was alot of fun trying something completely different with the mare...a summertime adventure!
"Sing along with us-da, da, dadada,    de, de, dedede- we're always hap happpy.  Life's for livin'  that's our phil-os-ophy!"
Posted by allhorsestuff at Sunday, August 21, 2011