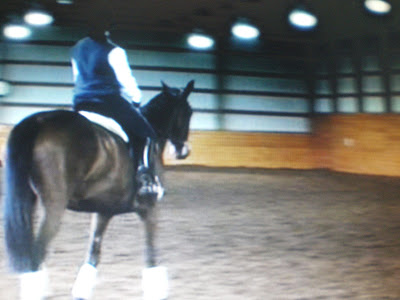 This was my first clinic and boy, was I anxiety stricken. . . I was told to, " have everything spotless and to make sure I had leg wraps on" ..um...I use "Sports medicine boots" for trails and training. I do own a set of the "Polo Wraps" -because my former trainer had given me some as a gift last year-though I have never learned how to wrap the Bright-fluffy-white-clean- things onto my mare's legs. It seemed a bit much for a lesson and never for the soggy,muddy trails I ride!


I was first to ride on the first day-ooou- because I was the last to sign up-and I got in on a cancellation. Nobody was around yet and I was about to faint= for not knowing how to put the blame wraps on...someone finally came around to help me..and man...it seemed that my set of wraps were definitely for "Warm bloods" for the length of them! The gal helping me actually had to cut about a foot off all four of them to fit them to my petite mare's legs.
So now, I was praying the mare would not stop dead in the arena again, and LOOK straight-up- at the overhead speakers. like she did the day before. . . to see what- the- heck was hurting her ears up in the rafters. She couldn't imagine how a duplicate person could be sitting there!
It had been such a volatile ride in the arena, just the day before.

To my great surprise and JOY-my friend,  came in -just then- to help me....She leases a mare at this barn. She fetched her up and brought her inside to stand in the grooming bay with me and Wa. The grooming bay has been a source of fear for my mare as we have only been at this stable for less than a month..first time we were in the one by the stall wall...a design FLAW... showed up for us ,  a horse put it's head over and freaked my mare out, as her back was to the horse behind her.
And , I admit, my love of the trails has kept me outside more than in. So  Wa's claustrophobia really showed up in the partially enclosed grooming bays...and frankly, she was not altogether sure about that arena either, with it's loud voices from the rafters!
So, my friend  went into the arena with me for the first 10 minutes or so as we warmed up.
What a lifesaver you were/Are, my friend!!!
All went soo well..in fact, it went better than that. The gal from California, Colleen Reid, apparently took a liking to my little green Thoroughbred mare-that rather looked like a small-fat Warm blood, for her weight at present.
Another stable management  flaw- having two horse's together for feeding time, with no one managing the feed intake!!. One will always eat faster(mine) than the  other, and try to get more! Mine did...and unfortunately my sister's did not. Pantz lost weight and Wa gained.
The clinitian, she cooed over her and told me that she'd take us through 4th level Dressage.(I don't know what that is yet...but I know= it is a good thing)
I just knew in those first 15 minutes ==that I was going to have a Fun first clinic !

Ah~ it's over now....time to relax and view the DVDs 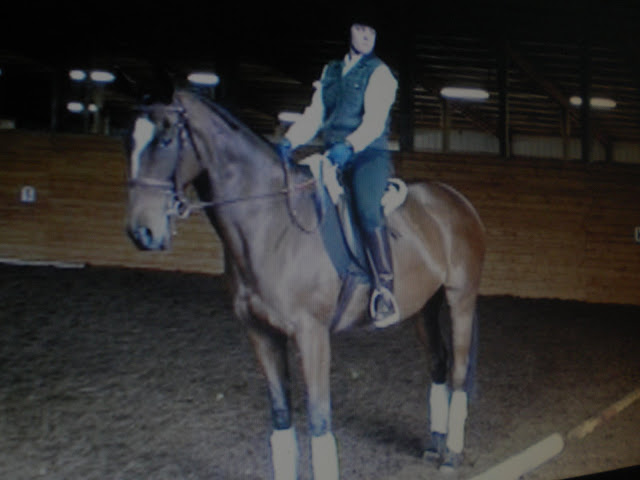 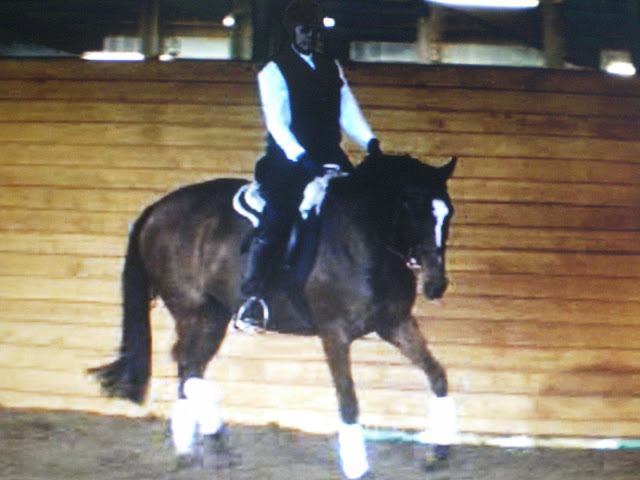