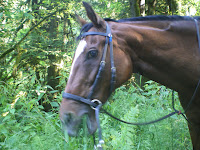 Okay...well, I finally got the courage up to ride on the trails with my "Bit- less Bridle" yesterday--My-thinks she is a racehorse-Thoroughbred mare did well the lone ride we had earlier this week, She also responded well in the arena, the few times Used it.

YEP! it took my entire body as a cue just once yesterday..
when we cantered some and she was behind...was not that bad.
I actually had it on her and then took it off and put it back on her at the trailer getting ready. 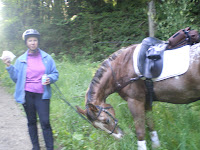 I knew that we were stopping to have a "Picnic Dinner"...thanks to Nora's cooking and packing it all...Nora was riding my sister's mare Pantz, and she had on a bridle that doubles as a halter ,with the bit coming off when wanted...so Wa needed her mouth to be free as well for munching, I thought!

It was great and I feel pretty good about the trust relationship to my mare. And>>>>
we found a new trail system to ride in! I called it "Howard's Canyon"YEEEHA!!!

Nora has no idea I got her on film....Ya gotta watch out for me, I love to document the fun!

Posted by allhorsestuff at Thursday, June 19, 2008