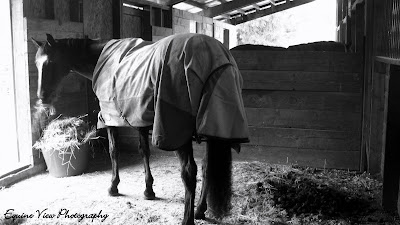 Easter Sunday, late afternoon, I was able to sneak out to the country to see my mare.
The storms that had been a raging all week and work also, kept me at bay.
When I arrived, my Mare was standing expectantly, at the gate.
Once I had gone inside the barn and saw her stall and the grain left in her feed barrel- I knew why she waited there. It had been a fast- paced- Holiday- morning and she had not gotten her morning Eats in!
At Once, I collected her and Romeo and she began to happily finish eating her breakfast remains and more I heaped on for her. She snorted a sigh in delight.
I decided to clean my PBO stalls for her. NOW it had began to really storm outside!
As I cleaned the four stalls, I would take breaks to visit my mare, take her blanket off, and set up my grooming tools+ the clippers this day. I had to decide to give up the hope of riding..it was nasty!
As I started to groom her, finally finished with the mucking, she did something totally unlike her...she turned around and pointed at her barrel,  just near her elbow...Okay....I took my soft , red curry and circled it there for her...HA! She grew the familiar "Long Lip of delight", showing me I got it right and to continue.
That was cool, she normally does things like for herself, not being a mare that favors me brushing her.
I have a use after all!
Another hour had passed, and as I looked outside the large, sliding barn doors, the rain/hail mix looked as if it may have subsided some...though as You all know....when you are inside a barn with a metal roof, any amount of moisture sounds like a storm outside! I checked and YEA, it actually was quite sedate and inviting.
I tacked the mare up- booted up, and mounted up in good time!
~Easter Sock-Shot~ 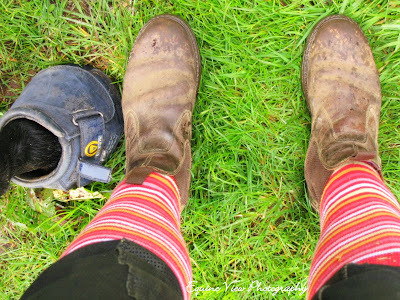 I had not been out to the mare all week and decided that maybe a bit was in order this time...but not without concessions to the mare~ A promise from me to her for a returned willingness.... I shall keep my hand upon her wither with a slight taunt rein, for her Willingness to take my seat and leg cues only for direction and also...I want long and low trust from her.
She was Willing....Long and Low up the service road...so low, she escaped the photo, unless I put the camera almost on her neck! 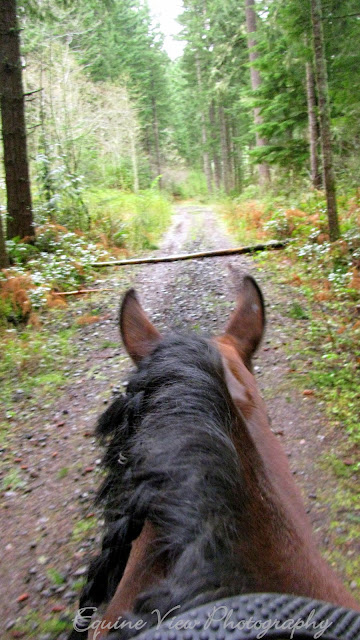 She continued in this fashion past the trail Y, and I allowed her to make the choice of which one...okay the upper road~ 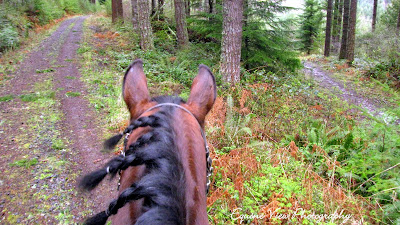 Oh...a slight hesitation...., we turned around, and I decided to go check the found GPS note... seeing if it were still there on the trail- near the spot I found the unit, over a month ago.
This trail is very much stripped of anything to slow one down if a hoof slides...motorcycles use it to go from one dead end road to the one I board on.
YUP...note still in place...see it at the bottom of the tree base? It is a bit brighter than the pic makes it out to be. 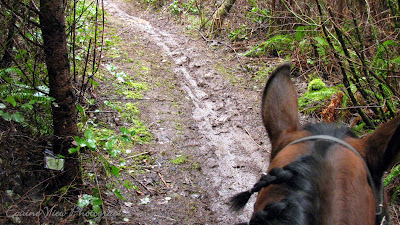 I have to say...the mare totally kept her end of the bitted -bargain- ride...she remained long and low and I kept my hand upon her withers. She felt no resistance, if she slipped, no sudden hit.
It is something I have deduced was a bother for her...me raising my hands when she slide and trotted downhills...I needed to trust her so much more by waiting longer...I see now that, she only does what she has to, to stay upright with me aboard. Waiting longer, trusting her motives, I see that even if she trots down the hill..it is relaxed and she stops as sooon as she regains her sure footing.
She is now WILLING to trust me!
Back up that slippery trail.... 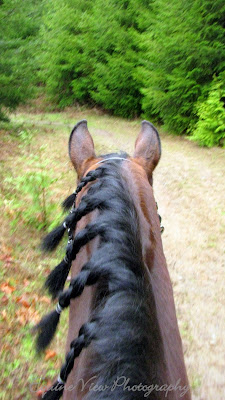 And down the road again towards home~
Long and Low she goes. 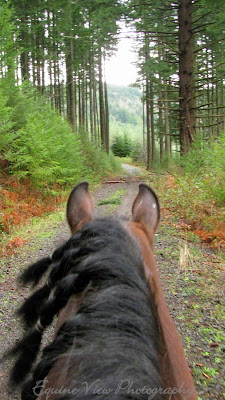 Her Willingness Factor now raised by my apparent sign to her...
my hand upon her wither~ She high blows home...walking in peace. 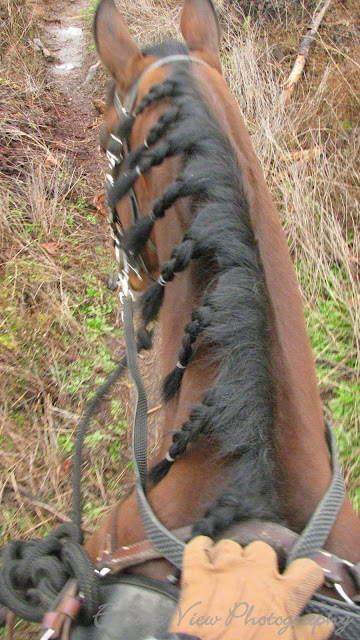 Posted by allhorsestuff at Tuesday, April 06, 2010