Trials on the Trails!

Woo hoo...that was one long and hot day of Trail Trials last wkend!
I know My mare hates to ride alone in the trailer and weaves fiercely- as we travel...I can feel the truck being rocked to and fro, when she does it. So I enlisted the help of "Daily Calm" it is a Springtime Inc. Natural Product- to help soothe nerves and make transitions easier for the horse to handle...
basically= A horsey downer! 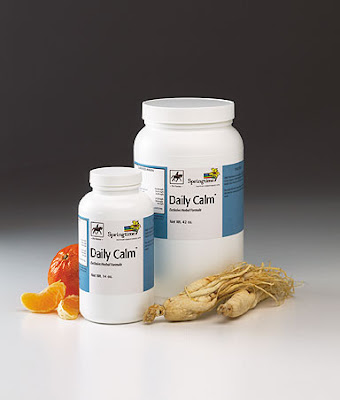 I dosed her up the night before and some the morning of...and man! She was very smooth and calm handling and riding in the trailer..on the freeway for an hour and 1/2~ I do think it caused some memory loss though..she seemed a bit out of order...she normally pees upon my arrival...seemingly to ready herself for a ride!
She did not...in fact, she did not urinate the entire time- all day...which made the ride home like a child in the car that really had-to-go! Yea, the ride home was her pushing the truck most of the way..I felt badly to  for her.. knowing she would not go in the trailer...she never has. And you should have seen the river that came out of her when we did get home to the bedded bliss of her stall!!! No splashing.

Okay, here is the disappointment for me and you both...I felt it was unfair to take photo's knowing there were 10 folks participating in the T.T. behind me. I did have the camera with me on the saddle...and MAN-Ooulala! Theses lands were so pretty..and the farm equipment and the outbuildings and such...I have never seen the like. NEXT year....I am going to be dead last...so I may take some photo's! 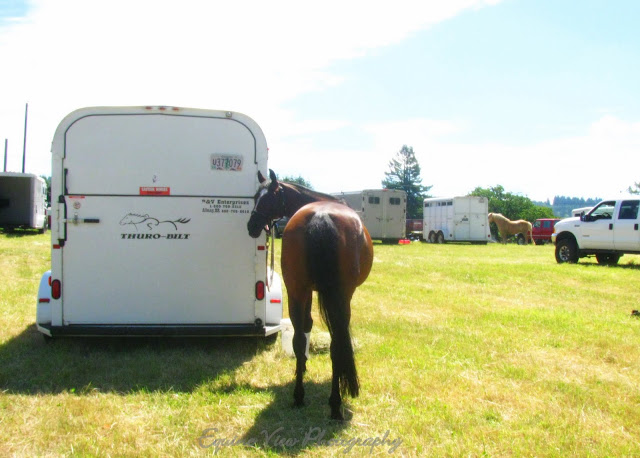 So, there were 4 rows of trailers...some spots were vacated and then refilled by the time I was ready to ride... hence, the 10 riders behind me! I bet they had over 100 riders altogether that day! Someone said they hold this event there every year. I imagine it was a joint offering of lands of 4-5 farmers...it had creeks and bridges and such cool outbuildings..some looked to be little rental cottages and some of the barns were fabulous.

I will list all the Obstacles...and how we did under. I wanted the "Schooling Ride" but they told me that it was not offered...maybe because of the volume of riders...they got finished after  5 pm as it was.
1) Steep downhill
I am sure we got a 0 (no points against us) on this one. The mare felt slighted somewhat...that she had to go downhill...but she did it!


2)Mudd Bog
This one was a glorified muddy tractor rut...and it would have been fine...but it was next to a New Zealand Wire Fence...and you can hear those..I am sure my mare felt it too! There was NO-WAY she was getting closer to it and going through the mudd!
It made me upset that  I asked something unfair of her.

3) Creek
I could tell she was on sensory override...she actually balked at this creek...and it was shallow and no rocks. We could see the horse ahead...way above us, on the hill, and she kept looking up to them.
I seriously think, if I had the time to allow her to look around, and go around the chosen obstacle a bit...instead of heading right for the obstacle...the times would have been very different.
She did comply, eventually so. I decided to apply for the " one step at a time " routine..asking her to halt after each step, then praising her accordingly so..and it became redundant for her and  finally, she walked right in as we neared the creekbed.

4) Steep uphill climb
No problem, she and I used our butt muscles, me standing up and forward, she powering up the hill!


5) Gate
NOW THIS WAS THE ONE...obstacle, I thought we'd fail on...she hates to slow down the do minute movements, while I am leaning....well>> it was an excellent gate.
TALL and with a rope to simply lift over the post. It also was level. She complied with my sidestep right...2 step forward, turn on the forehand, 2 step forward again, and sidestep right again, to loop the rope back over the post!
Wa mare...you rock!

To me, this was another unfair obstacle.
It was a 4 foot piece of railroad  rails...metal rails and all...set into the ground and the ground fell away on the right side...we were to sidepass the entire length...well, she gave it a go...but kept slipping off behind and I finally said.."I am done asking her for this one". The judge said everyone had a problem with it".

This was a working windmill! Gorgeous thing of beauty!
Wa mare did not notice the mills hovering/rotating above her at all...making the creaking noises they make as the wind turns them this way and that.
She was en-rapt with the "flag banners" flapping in the same wind...at the base!!!
We were to go to the base and pick up the Hoola Hoop and then walk it over to an item to place it over...
This was timed...and we timed out...right before I could get to the Hoola Hoop!
Oh well!


We rocked with this one!
Grab a basket from a post top...ride with one hand up a set of 5 stairs set in the hill...as you go, drop bread crumbs/from basket in your other hand, on the steps... continue up to a cottage and go around it, then come back down the steps and replace the basket to the post top.


Again, the mare and me rocked on this one!


this little metal grate was only 2 feet squared...in my mares eye..something to simply step over, and move along little doggie!
I got her to touch it once with a front hoof...but they wanted 2 hooves to touch it.
Another-oh well-


This ramp was a bit narrow for the mare...she did get on it with the fronts once...it moved and she stepped off..I tried several times before, I could tell she was getting fried with it all!

11) Water trot + embankment drop
Having to quit some previous obstacles...I feared something was occurring now in the mare's mind-
BALK HARD AND GET TO GO and NOT COMPLY.
We took the cup of water...trotted slowly so towards and embankment...we were to either trot over it and or walk on down over it, hand the water to the judge.
She got to it..and truly...her brain was so fried..she litterally turn her little head and placed her nose on my leg..as if asking to be released form some terrible trouble. I asked once more and she tossed her head up ...THAT she has NEVER done before.
The sympathetic gal and I said..not worth it...she was over stimulated to follow through !

12) Beheading the poles with a bat


Wa mare simply and easily allowed me to pole bend through the 5- 7 foot poles and hit the rubber human heads off each, as we passed...then we placed the rubberized bat in a sleeve on a tree= we completed the task and left smiling!


Now this one...it looked so ominous to me...the mare shocked and surprised me with her willingness to seemingly...walk into something that was clearly...a hole and dead end!
WOW...she balked slightly...then I did the "ONE STEP AT A TIME " routine again...she walked straight into the 10X10 3 sided enclosure...stopped, sidestepped to the left. I plucked a ribbon from a fake princesses head. We backed  straight out- and I plunked the ribbon into a bucket.
YEA! We did it!
The judge commended us for "our steady persistence" till we completed the task. Me cooing -with a step forward and growling -for one back!


14)Downed tree stumps and ravine
Again..this very deep woods shady obstacle..made my mare nervous...she totally refused to go through the Stumps to a rather hole drop off looking ravine.
We were to go into the ravine/turn left/ back up the entire length of the ravine lined with 2 downed LARGE tree trunks/ about 20 feet. And there was a jog at the end of 4 feet left then right..all at back up.
But then...the judge said, you may step over the large tree trunk and comply that way...Okay!!!
We did it..she was excellent backing the entire thing and never stepped out!


15)Bridge crossing
This was more a human bridge...and she new it..it was narrow and the rails were as tall as she was...boards gave way and bent as we stepped on...she refused!
I was allowed to dismount and cross...tarring 10 seconds -counted out loud- in the middle.
I got her to come across...but when i looked back to tell her to stop...she was COMING FAST!
I abandoned standing in front of her and got across myself, as she whooshed over it too!


16) Dark barn corner with Geese and goats
THE LAST OBSTICLE!!!!
It was HOT outside..and all these obstacles had taken us about 2 hours...yea, hard to tell reading about it= that the land we covered was pretty vast!

She was a pretty fried little Thoroughbred!!!! I heard about 5 judges on the radio saying..."there is a BIG BAY Horse coming your way!" TO THE NEXT JUDGE. Ha ha!
She is really not big...but big presence!
The barn with white geese ,a flapping their  wings...was a bit overwhelming for Washashe mare...at the third -straight legged-snort..I yelled up to the judges..."for safety sake..the mare and I are forgoing this one!"
WHEW, DONE!
The mare and her official number-retired- and she enjoyed some fresh hay, in her safe stall! 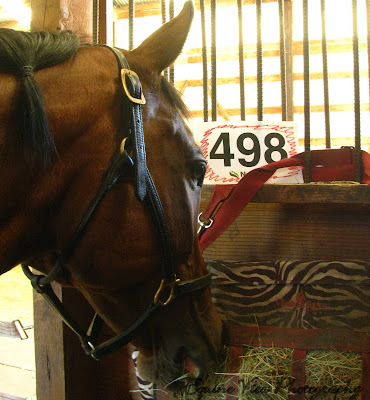 Now..I have some complaining  to do...but, will end the post now...and fill you in later..
THANKS FOR EVEN READING this!

All in all, I am so proud of the mare...but next time...No TRIALS FOR US..unless we may train during it!
Posted by allhorsestuff at Wednesday, July 14, 2010