My Washashe mare...spending some time in the stall doorway, during a  sweet smelling fall rain . 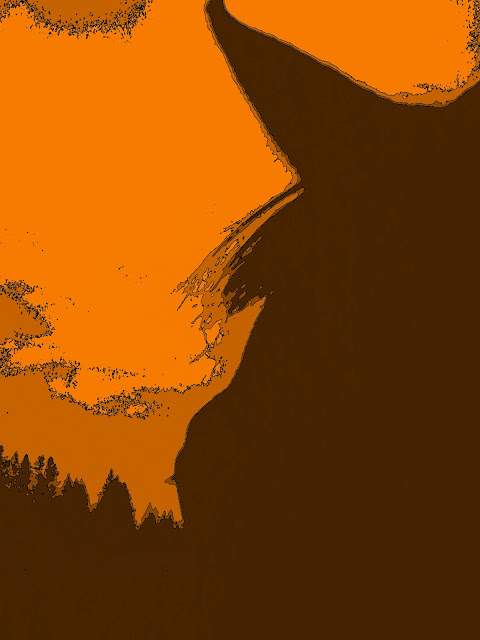 Autumn times have been quite beautiful around our fair city and some sunshine even  blessed my sissy's visit last weekend. It has been so good to have this Indian Summer type weather...lifts the spirits.

I parked on the street in front of our mom's house, to pick siss  up, to go to the barn.
We are both "Truck Girls"...I call it! 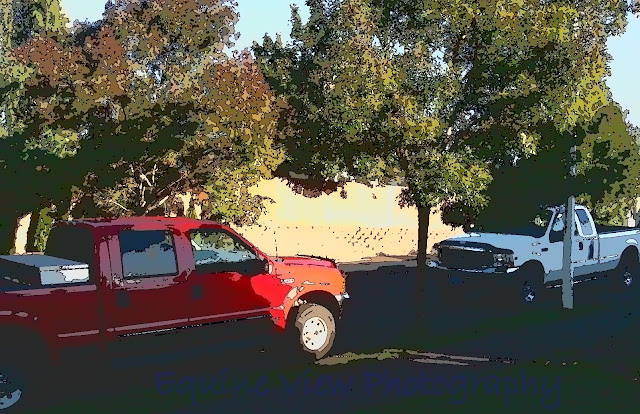 I am loving my new Phone...it takes pretty nice photos! Since the computer is fritzing out with no memory left and old attitude...my phone is the way to post any photo's, of late!

As my Sissy and I drove to the country, the recent rains had cleared the city airs, enough for us to view Mount Hood from the road out of town! 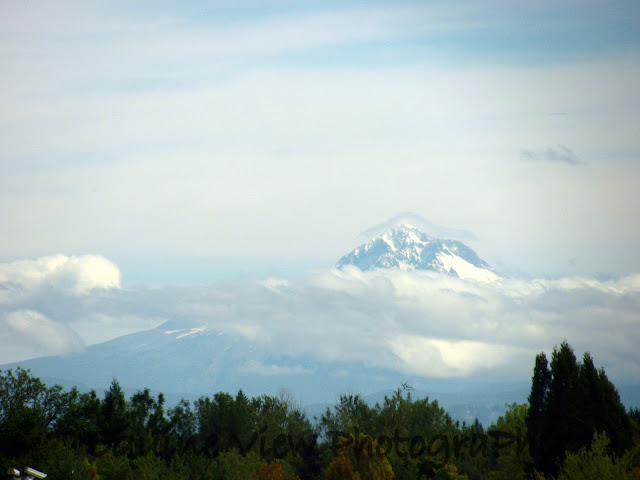 I had a plan for this days ride... a Smooth, safe and healing ride...little to no hills and no need for hoof boots either, for Pantz mare.
That is- IF we deemed the mares fit enough and in good enough spirits to travel and ride.
The day before, we had ridden out from the barn( that little 20 minute ride I mentioned last post)...first ride on them since the original fall on the road 3 weeks ago.
The  revelation about that  day and Pantz dumping me over some ducks...
I am sure , that was not it now.
Me seeing the unusual dropping of scat..now I know, were not Bear or Coyote.
The local aggressive logging, may be what is moving the Cougars  around so much.
ANYWHO.... After we got back from that ride... we had been talking amongst ourselves about how terrible Pantz was feeling...kinda wondering what she was going through... We were overheard by our  PBO.
She then told us,"Pantz had a nasty sliding FALL, yesterday".

AGAIN-I am amazed...maybe it is all "just horsey behaviour and happenings" to some...but I am into the DETAILS, if any of you have not noticed yet.
NO wonder she would not eat and her stride was short. I mean, she's 20 years old and a bit fragile.She has had a hard life before and some during, my sisters ownership of her.
We think her POLL was out and her Hips hurt.
We did some massage and Liniment rubs...released her poll and called it a night!

My sissy, since she is staying at the current Private barn, is thinking about putting up and "INCIDENT" board.
A place where things like that ...that are seen by the handler
and mentally noted, CAN BE NOTED...because, those things, specially of  injury,  make a differance to us folks who can not be on site withn our horses.
We need to be consciencious of what happens to these equine partners. Even though a natural occurace to fall sometimes, we must try and apply it to what we ask of them. They are athletes and and off day, usually does not come WITH OUT a reason.
To the best of our knowlege, we shall gently be,  partner with our horses
Extra "EYES" on the scenes...wow, can tell us stories they may not be able to.
Wa in her paddock,  enjoying the warm sunshine. We've had an Indian Summer this fall. Some rains, but warmer..and lots of sunshine! 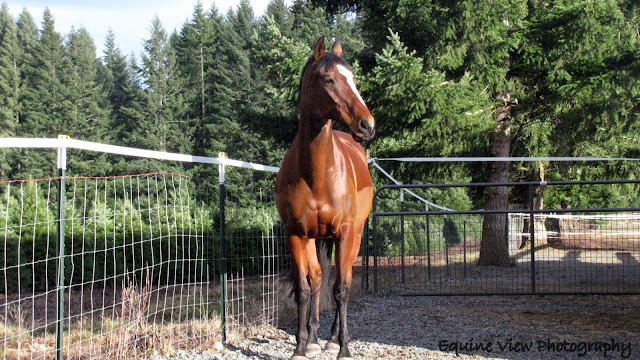 So...we gave them extra loves and waited a day to let them settle into-going out to the fields and -let Pantz heal some.
She came good soon enough for our planned outing, last Saturday. It was slated to be a WARM Autumn day!
- BUT-
Friday,  we got a msg from our PBO saying, she was off for an early ride somewhere...
it so happens that she ended up getting lost on that ride, somewhere else too...sometime LATER she called her  husband, to retrieve our horses from the fields.
(I WOULD HAVE LIKED THAT NOTIFICATION as well)
So, he  did the horses Friday night...they may have stayed out too late per my liking, and I find now... ..Mine got over grained, for the note I wrote, in the tack room where the feed is, again got overlooked.
A NOTICE BOARD...is sounding better and better..Maybe right on the stall!

So, we got there Sat...my mare was having PROJECTILE- POO.
It so shocked me!!! I mean, to see your horse's poo come out, like urine!
NEVER, has that happened in the 5 years I have had my mare.
OH! My mare can't get a break!
I am sooo glad she did not colic!

-WE HAD TO GET OUT AND RIDE-

So we did!!!
We made sure we had water and hay for the mares... I made up some beet pulp with electrolytes in it, knowing my mare had shot-out-the-back-end-  most of her moisture.
AND WE TOOK OFF!
Here the cute horsey buts are...at FROG LAKE Mount Hood, parking lot apon arrival. My mare had shot poo OUT THE TRAILER DOOR...her tail was green, when we got there!
I am glad I brought 2 pales of water...I soaked her tail and it became black again. 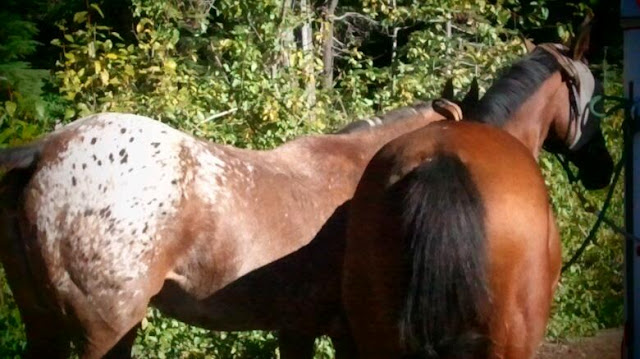 It was PERFECTLY sunny...PERFECTLY.. Sweeeet! 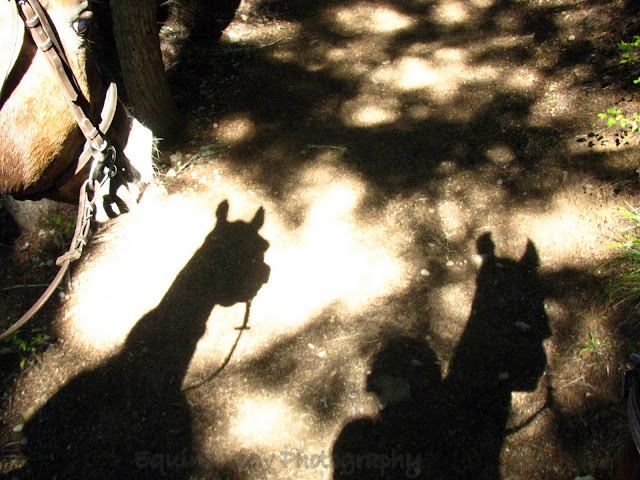 I took snaps on the nordic ski trail..perfectly flat, wide and with out root or rock!
The mares were in good spirits, and seemingly had enough energies, from past tramatic events, to carry us up the moutain to the lakeside. 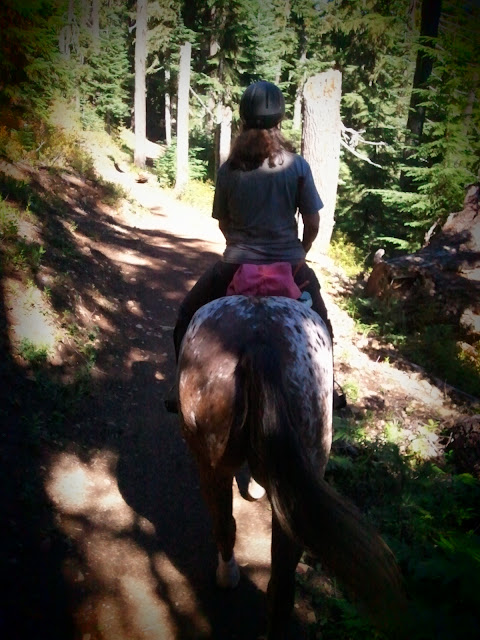 A nice compy ride- for the both of us!!

THOUGH...she  was really out still and sore. She groaned -SO MUCH- upon heading down some easy slopes.
She even misbehaved by balking some..so my sissy took her headstall in hand, a few times.
She seems to calm quick, with this strategy.

We got to the LOWER TWIN LAKE...ooulala! 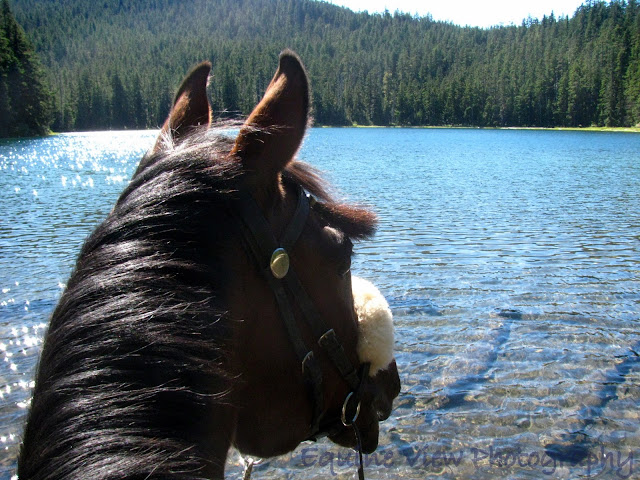 Wa mare was talking loudly...with her LOWER LIP too!!

Pantz mare...looking at  all the activities~
there were TONS of folks out camping...though you have to pack it in here..the weekends SUNNY/WARM forcast, could NOT be Missed!!! 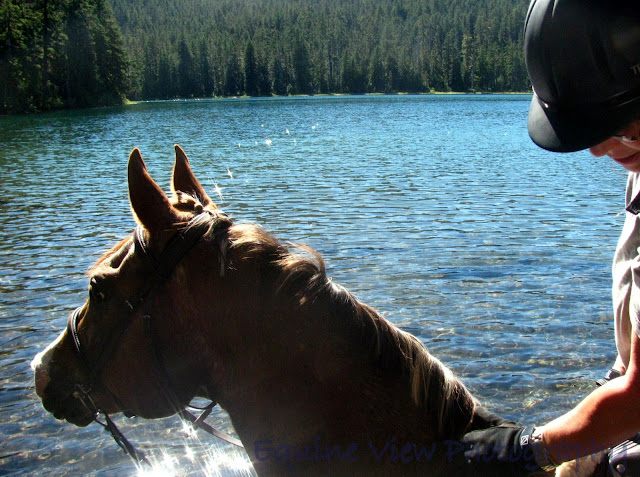 We went into the water...the horses drank well...both of them...from the huge watering trough nature made! 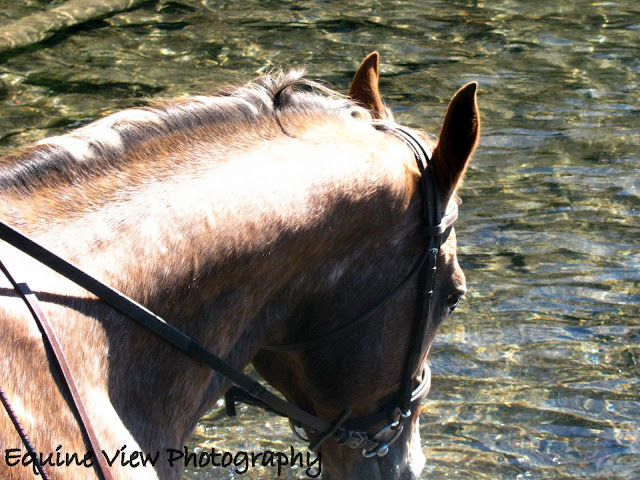 We decided to lunch on the other side of this small lake...a bit aways...from  the rope swing activites and campers. 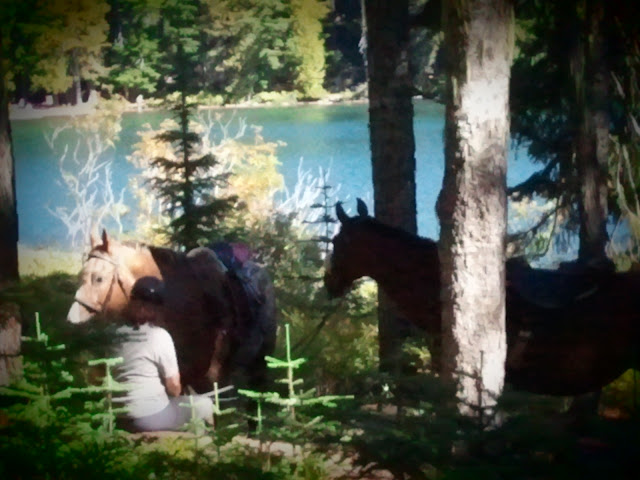 Such a nice little trip...ir did ease some of my sissy and mine's concerns of late....at least for the day!

And the colors..oouu!!! They were so fantastic! BLESSED are we, being sisters with horses and able to take little jaunts as, such easily.
I can only sing praises of thanks to GOD, for these prevailing pleasures.

He has been so faithful and I do- NOT -wish to overlook anything. Even though Life is difficult and trials seems to squish the spirit at times..I CHOOSE to replace the memory of the difficult...Replace it, with a time like this. With those that love me, and wish for my best.
I love that my sissy will be nearer to me soon, I pray soon!

The huckleberry leaves, on the mountainside slope...flaming red. 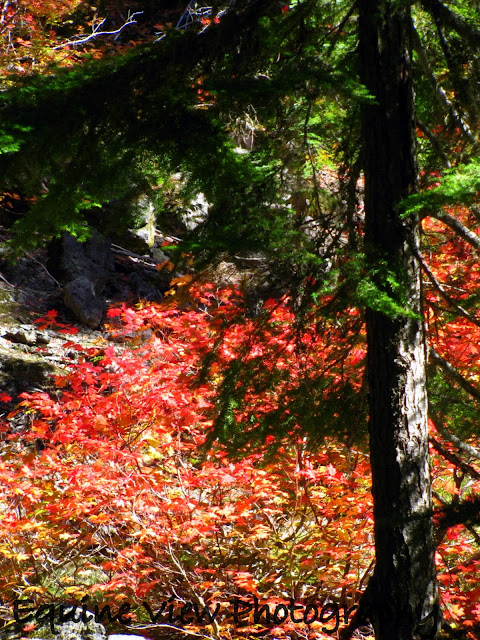 My sister was excited to share this pic, she caught of ME, on her phone's camera!...doing what I DO ALL THE TIME....
I now, share it with you,
Chuckle it up...go ahead! At least I was not on my belly or upsidedown!!!I look rather normal...with helmet of course~ 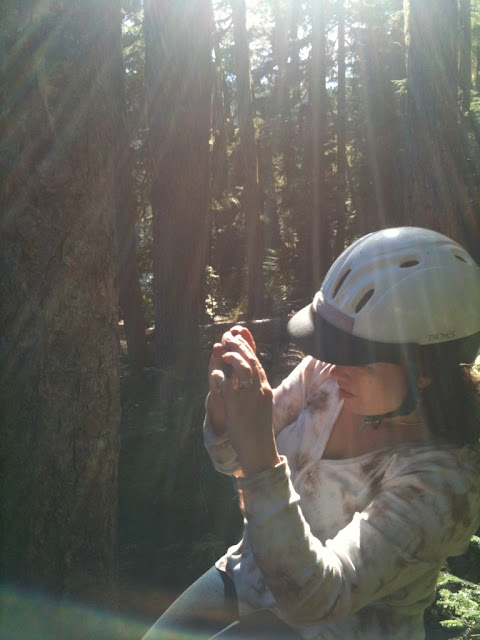 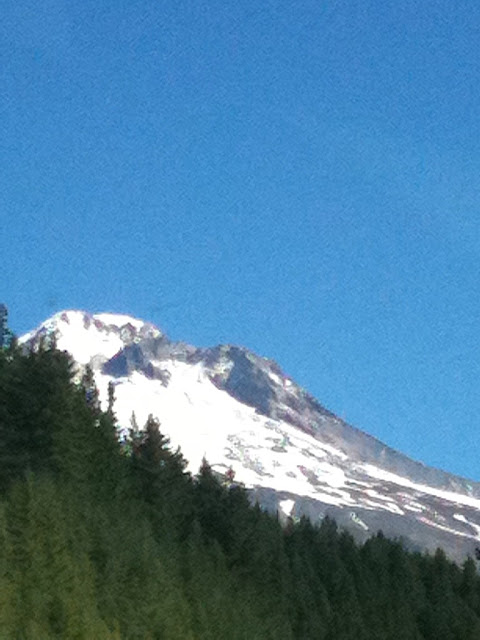 A LITTLE NOTE:
I have been packing and packing...a little remorseful too...such good memories at this barn, and such a good freindship.....I now believe I am saving for the leaving.
In fact, my PBO and I went on a little ride, yesterday. It was about 82 degrees and she brought home a new horse to try out, earlier that day.
I had been packing for a couple hours...cleaning up gear and organizing as I went along...I thought,
"I WANNA RIDE- I GOTTA RIDE!!!"
So I called my friend  /BO up and said..."wanna go take  your new horsey for a ride with me??"
She was surprised, and even moreso, Idid not want to ride WA mare.  But, I still don't..and probably won't here again.
The trails are steeper and muddy now..I want to begin again in the arena,on the ground.Contained.
ANYWHO... WE DID GO! Her new gelding, DUDLY"
is very level headed. He is 8, about 14.1 hands maybe 14.2.
They say he is a QH...I beg to differ...maybe a Quarab...but..definitely an Arab or most likely, another Morgan.
What do YOU think??? No papers. 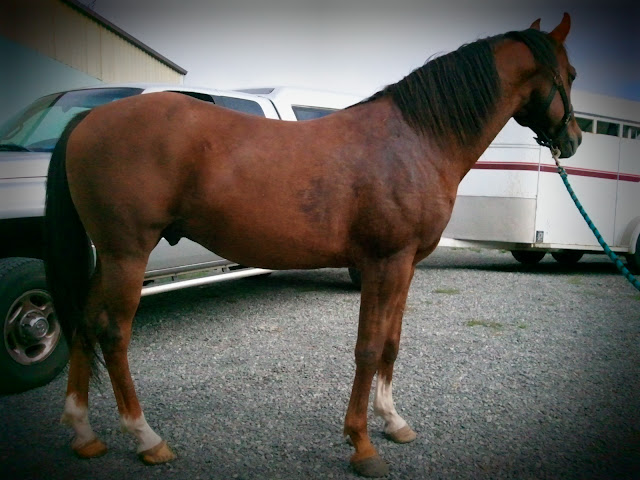 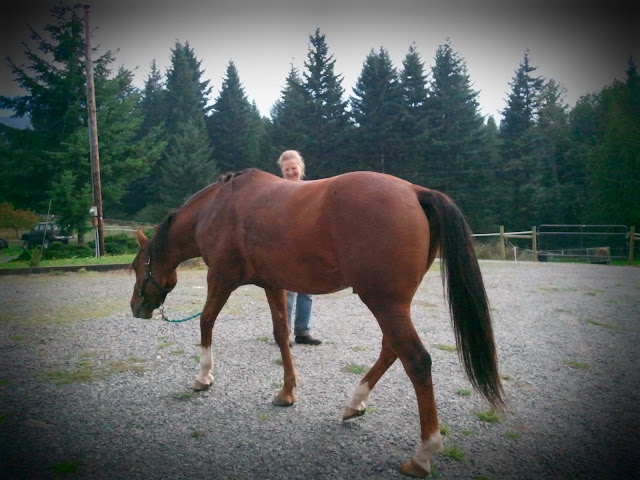 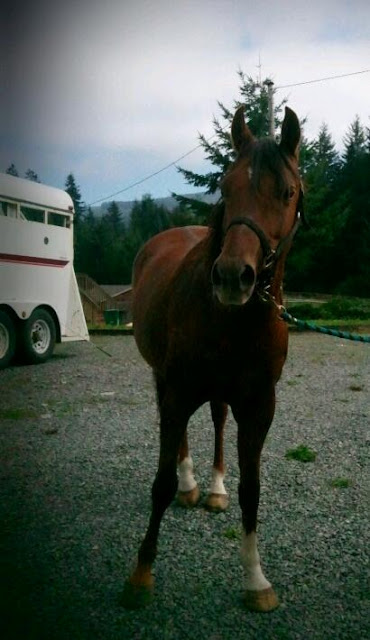 We set out,   The mares Washashe and Pantz ran and played in the fields next to us as we rode by..me on one of my friends  Morgan steeds.
We had a nice parting ride together, and I feel so much more at ease. I know I will be back and back..and maybe she'll come over to ride with me, on my new trails too. Anyway..A nice soothing, sunny ride and the gesture of goodwill...and..she said, " take your time with all your gear"...woo..I mean..man, I have so much.. + the Timothy hay!! We settled on me taking what I can manage on Saturday...and being able to leave some, till I get organised.
WHEW!
Things are looking up...at least , I am!
Posted by allhorsestuff at Friday, October 01, 2010

Email ThisBlogThis!Share to TwitterShare to FacebookShare to Pinterest
Labels: Ride an Autumn Mountainside