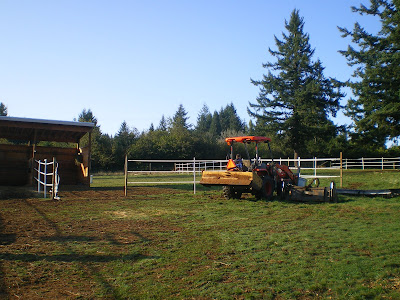 Okay, This I have never thought would or could happen.
Today, after getting my Pea Gravel footing delivered and laid atop a felt ground cover base, I went for a trail ride...and what my mare did was simply amazing .

I had some daylight time left for riding, as the gravel man got me outa bed earlier than normal on a day off..all week I have been coming out later and riding till dark and once, I came in after dark with a head lamp.
It looked less foreboding then the weather experts had predicted, yet the very COLD, Nip in the air said that the snow in the Cascades forecast was indeed near.
Any who~I planned to go do some trail renovating by setting up some log jumps + something NEW!
The mare looks a bit dejected here...but *WARM, in her quarter"Blanket" I made 2 years ago. 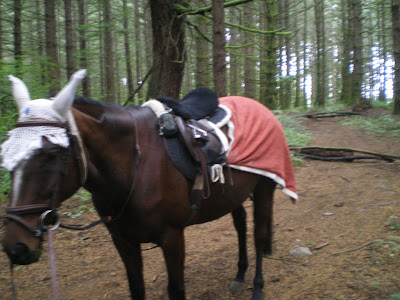 2 New jumps behind her. Notice the white bonnet and blue spec in the middle of it... is a "Flashing light" I turn on now, while hunting season is going. I too, have a BRIGHT Orange vest to wear! So...after jumping the new Trail jumps we made..though Wa seemed astounded they were there though she was with me as I set them in place and we walked them together. Once we were trotting towards them, they must have taken on a different appearance, I guess.
After jumping the logs, we set out for the next mission-a few miles away- (Stacey, I must get a Garmin for the mileage!)
I have been wanting to make a batch of new trails, that the motorised vehicles-that are illegally riding around out there- can't use.
Firstly= because they are hidden, they won't start or end in normal places. The bikers most
likely will never see them... they are usually flying up a slick dirt trail so fast; that they most definitely won't see something that still has ferns, moss or branches on it!
AND Mostly= the existing trails are sooo blame slick because of our clay like dirt, that it becomes dangerous for our horse's leg health and up-right-ness to remain that way! The motorised vehicles strip the soil, plus they "trench" the trails into narrow tracks that our horses fall into, making wet winter riding impossible.
Without the tires on the trails, the track we ride on would have needles and leaves, ferns and moss to help it hold together. 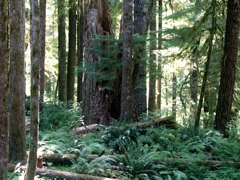 Anywho, I saw the beginnings of a one of the new Equine- Only- Passage trails...looked for my ribbon, that I was only going to place upon trees =ONLY= for the beginning stages of the trails, because you can not distinguish direction well in the raw thicket, and I did not want to get lost! It was not there, must have taken it out for a snack space in my little pouch . Hummm--- well, Heck! I decided that we'd just try it for a time and I would break some eye level branches, for myself, as there was NO-WAY to see a hoof mark on the ground a 1ST, or even, a 4Th time through it ..it is very thick!
Now Wa, I must tell you, does NOT like things touching her at all so this is a dreaded event to enter a thicket with no trail! She even hates trails that she may see plainly..if they have some overgrowth on them, that might reach out and touch her! But she really proved herself worthy of a challenge today..she just went forth.
Into the thicket and we just choose our way as we came to it..looking to miss holes, stumps. I did not go straight as I hoped..because I thought I better see if I may find the other established trail somewhere below us. And we did, escaping most of the slickest spots we dropped back down onto the last 600 feet of established trail. We went out to the clearing and took in the fall view, then headed back.
NOW THIS is where I was utterly shocked at what occurred next. I decided that no way was I asking the mare to try to retrace an untraceable path.....OH..WHAT...She, on her own, took the unmarked point of exit we had made minutes ago, up into the thicket..before I could even gather the reins from the buckle to stop her from turning up the brushy hill! 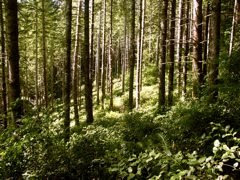 I just laughed heartily..and let her pick the way...off we went and without hesitation or hitch, we plopped right out where we had originally started the whole unmarked adventure!
MAN!!! I love this mare, she totally astonished me today! She somehow used her MareGPS to
backtrack an otherwise, nonexistent trail back through this landscape! She is talented fore sure!
Posted by allhorsestuff at Thursday, October 09, 2008

Email ThisBlogThis!Share to TwitterShare to FacebookShare to Pinterest
Labels: Way to Go Wa