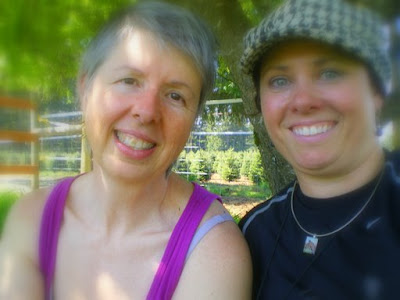 This is still catch up from last weekend...I am breathing a sigh of relief for all that went on with mom last week. Thanks for all the well wishes. She seems to be getting on better now -though was quite a scare!
After I was released from Mom's bedside..I met Nora finally, at my place for a ride.
Nora and I (above) were sooo happy to be together again, horsin'! She, being a Naturopathic birth nurse , introduced me to her like minded friend Debra. She lives very close to me..nice surprise...I am parking there now for a particular set of trails nearby...Jules is able to meet me too, from her facility.
The day was very nice In Oregon...70 degrees with a breeze. I was to ride Danny boy, a Morgan on the property that the owner wishes me to Analise for ability and " paring"we may do for him in a lease in the future. 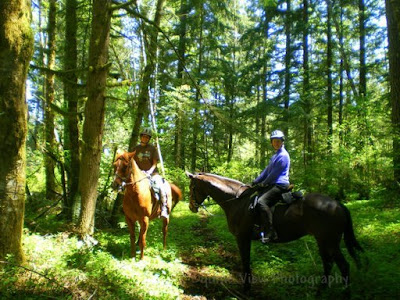 This is the neighbors 80 acre farm,I have the privilege to ride upon. This barn is so fantastically intricate in wood design, I really must get some close ups sometime! 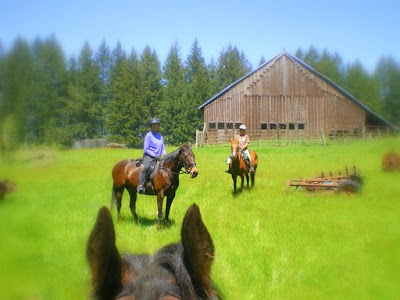 It was a great ride, I think I mentioned a bit in the earlier post...we made 5 creek crossings! There are quite alot of creeks and ponds nearby and it makes for interesting riding a training.
Once Velvet thought she'd skip crossing and pass...I was very pleased to see Nora persist gently, and she went ahead of all of us . She has really bonded with the mare enough to have a trust and respect with her. 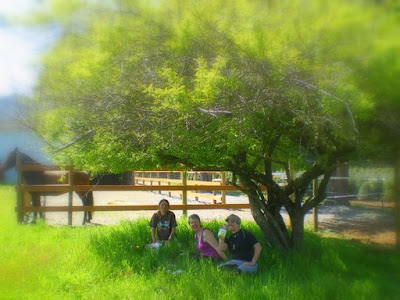 We enjoyed a small picnic after in the shade,while the horses relaxed too. 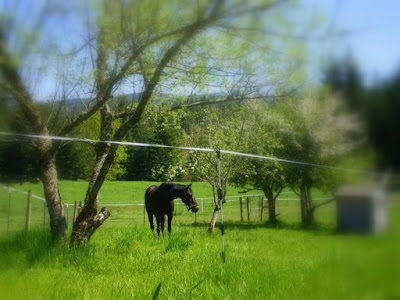 As if it weren't enough to ride for a couple hours already..I was dying to get on my mare and head out again..she had the week off and I totally wanted some saddle time before the coming beach weekend outing over the Memorial day holiday. So the gal that is staying with my PBO wanted to go out again and look for the pack we lost the weekend before...I thought I knew where it was too!
I just love this tree!! It's branches are like arms reaching over the trails. 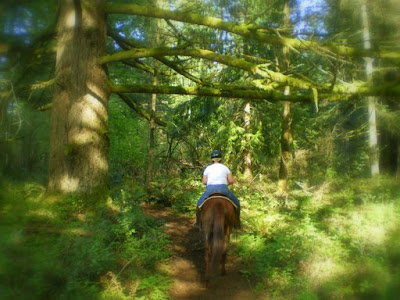 We reached the creek at the bottom of the steep, cliffy hill I walk down with the mare, and I remounted and we crossed and headed for the bog area. I usually cross on the left and there are huge round rocks the mare dislikes so I decided to cross in the open area...though it appears muddier.
WRONGCHOICE! OH MY! We were sucked down upon stepping in and she faltered to her knees...I was still on at this time,as she lunged up and back trying to regain herself. Then she went down all the way, to the left side. As the ground met my foot, I stepped off and held to the reins...it was terrible to see Wa floundering around! She made it and we just took a breather as she appeared totally dejected for the experience.
My rider friend decided to dismount and head over the rocks..better choice. We found the pack just up the hill from there and turned back to recross that bloody mess! Dismounted, it went better, though she almost lost her half chaffs and boot! Gotta make a better crossing place! The "TrailsShangrila"are on the other side!

Poor mare of mine! I gave the her the next day off too....for my ride over at Jules place, I took Romeo instead. BUT...before headin' out..I had a big blowout...it was awful looking and I wondered how the heck and when it occurred?? My PBO's husband helped me change to the new tire....I was fashionably late to see Jules...though as ere mentioned..she is the horsey fashion plate! 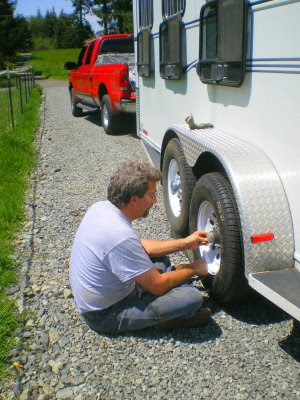 Next door to her stable, we were able to ride to a private fisherman's club. There are these beautiful ponds, all stocked with fish and for a mere$2,000 a year, you too can go anytime and fish! A.....I think we will just enjoy the pristine trails for free thanks!
Jules Stable owner has rights to ride there, like I do for my neighboring lands....it says something, for being a GOOD Neighbor! 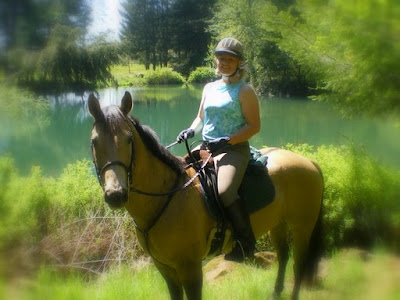 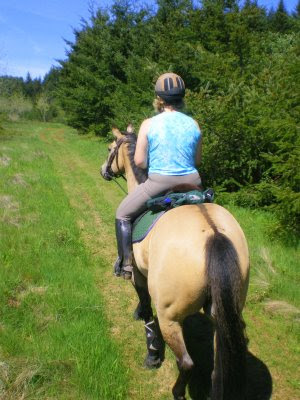 I am so happy for My freind for moving to this area that has so many nice places to ride ! 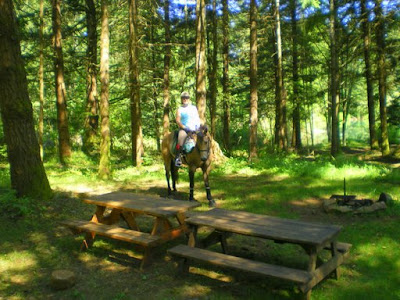 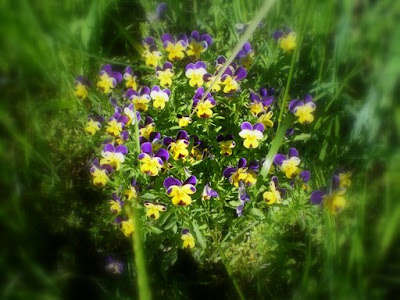 These little Viola's were sitting pretty amongst the grasses at the back gate to Jules Stable...a kind of welcome home for our Reunion Ride!
Posted by allhorsestuff at Tuesday, May 26, 2009

Email ThisBlogThis!Share to TwitterShare to FacebookShare to Pinterest
Labels: Together Again