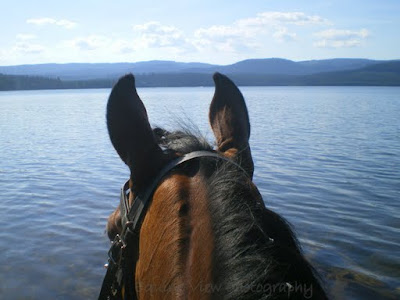 This is what we experienced as we rode the 13 + miles around Timothy lake. We'd go up into the shaded mountains and then down again to the Lake waters edge.... It was soo cool & wonderfully refreshing! 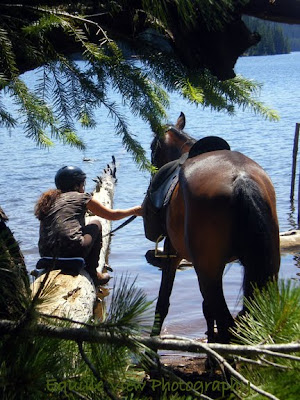 On Monday last, my new trail bud(s) came to collect the mare and I for another trail outing. We are now calling these times, " MUST RIDE MONDAYS" . I am so thankful for my new trail bud(s). Since I am a bit stranded at present, having trailer and no truck(yet). This newly found close friend, has been such a joy to get to know...absolutely no hidden agendas and all heart. She has been yet-Another Major Blessing-to me here at my new Private facility.

It makes me think of "Lori of Skoog Farm"...she asked me, after the last barn fiasco..."Now do you think things happen for a reason?" A resounding YESSS!!! And not all because of good things that have been occurring...as the fire tends to refine the soul. The trust I've gained in God's ways+ the new growth /discernment, are priceless. Not to mention the quality folks that have been provided my heart, after dealing with the opposite. 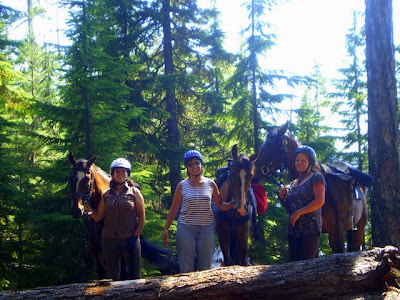 It was a Very early morning for this not-too-good-a-sleeper. I had to be ready , with mare in hand, by 7am.
My mare was surprised to see me, instead of my PBO. I got the wonderful "nickering-neigh" from her, as she anticipated her breakfast Oats and such. I hung out while she ate and groomed to be all ready when my friend drove up..then....
Off to get Simon, her young mount that I rode for our first Timothy Lake outing-last Monday. Then, jet over with the 2 horses to pick up another friend and her little Paso Fino. We decided to drive the paved roadway up to Timothy lake instead of the very rutted, unimproved roadway that is shorter(but is it..for the slow travel?) We had a near death experience...it took our breath away and we almost stopped to regain our composure's.
A Illegally loaded log truck came around a corner over the line..my friend scooted the truck and trailer over to avoid him..and just as we all thought to praise God for the safety and time we had to anticipate moving over...here comes a single LOG- placed sideways on his trailer- because of it's length, RIGHT FOR US- IN OUR LANE!!! We all gasped...hearts stopping for the few seconds...as we looked at the small red hankie, dangling from it's end approaching the windshield.
Just as we drew our breath again...and reopened our eyes.... realizing,it missed us by inches. I tried to call 911 to report it...and the signal was not available. We barely talked but had a profound sense of awe, that we were spared the freak accident. It made a very DEEP appreciation cover our time, up on the Mountain. 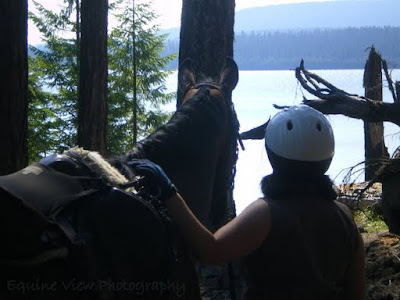 If you read other West Coast blogs, you know that we here in Oregon, had a weirdo Heat Wave - with temps into the 100's. I did not even know if thistrip would be cancelled...turns out my new trail bud is as tenacious as I, and it would take much more than heat- to make her cancel!!
I LIKE IT! ( I hear Jim Carey)
What a great decision it was to go too! Up on the mountain in the shade of the mighty trees there, and down near the watery splendor of Lake Timothy, it was about 20 degrees cooler! And with the slight breeze we had..The best place to be on a Hotter than Hoowee day! 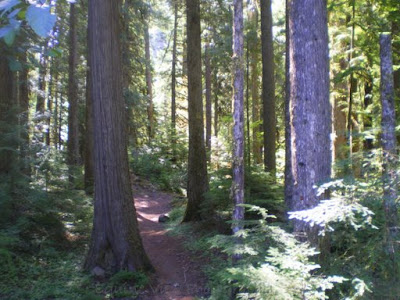 We endeavoured to travel the entire loop around the lake, which turns out to be 13 miles or more. The mostly flat and almost rock free trail goes up into the trees and then would come down to the Lakeside again. Often crossing the many water sources contributing to the lake. There is no mud to touch on these trails , but we did deduct that- you MUST have a steed that can and will cross MANY various bridge structures.

The first bridge we encountered was the worst for wear...there were some rather large nail heads rising up on one side and I thought to dismount, to make sure my mare traveled the side of the bridge without those. 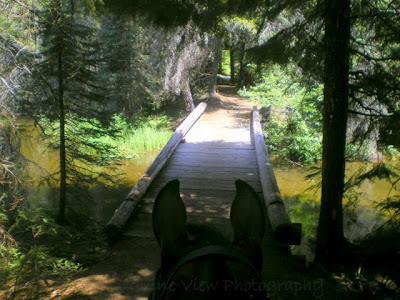 BOY was I glad that I did that too...halfway across...some rather loud and fluttery foul..probably ducks...decided to flap and run right under the bridge as Wa was above them! I did not want to look back...but kept going and from the sound of Wa behind me..she kept an even tempo and did not change her speed. I was soo proud of her..she did not rush me, but kept her head.

A training trip right from the start..lots of new things. I am glad to know that my Wa mare is seasoned...not too much phases her..or if it does, not for too long as she does trust me.
It was too funny too, at one point on the ride, as the 2 young geldings were in the lead position and beacme overly pensive. My mare became impatient with the stopped action in front of her and this time, instead of making her hesitate for them to regain confidence over the sight of some rather large, scary grouping of stumps, I gave no cue to hesitate behind them and she indignantly passed them up!!! No notice -whatsoever- to the stumps that stopped them! We all cracked up...the "Trail Boss Hoss" & matriarch mare leads the way !

About half way aroundf the Lake, we dismounted at some hitchin' rails made for this purpose, to go on a short walk to "Little Crater lake". A boardwalk took us there. 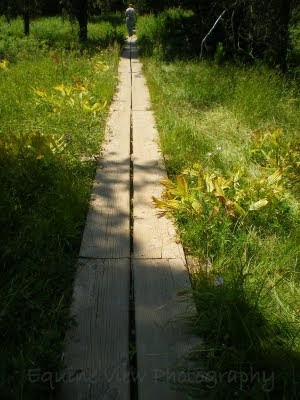 Gorgeous! The Crystal clear aqua mountain waters, of about 34 degrees!! We splashed and got refreshed. I took some grasses back to th mare thatbI had dipped in the cold water. 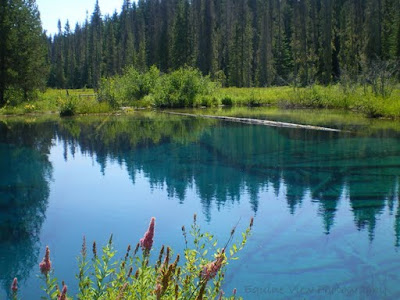 We then remounted for the rest of the trails. We were up in the mountains and as we came down, the mare here, is looking intently at our next bridge, on the trail below the boulders. 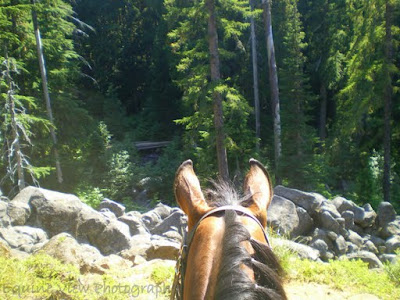 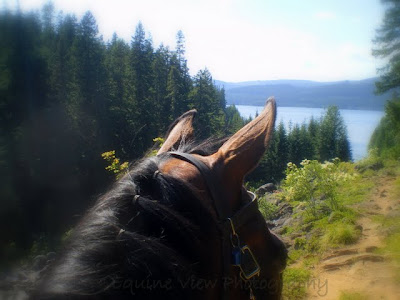 Here are some of the other bridges we crossed..some like boardwalks...very cool.


In between mountain trails that took us to the hills, the trail would soon again go down to the waters edge. It allowed us the perfect timing for taking the horses in to cool their hooves and legs and drink up. 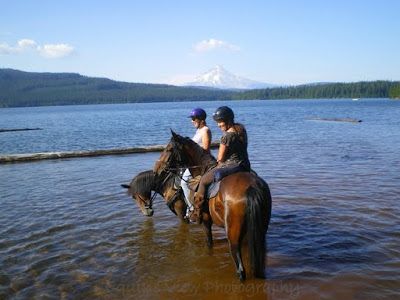 I brought my sponge..it has a string attached and and 2 clips. You clip it to the saddle and when you enter the water, you unclasp the secondary clip, the sponge falls into the water; You reel it in and bath yourself and horse !
And thought I also brought the Cashel Soft Saddle too...but decided that- this trip around the lake- with no stirrups- was not even an intrepid riders gig.
Though Next time, I will wear it on Wa, as she really got into the water stuff..she would dip her whole head in and blow bubbles! I did not detect reluctance to go in deeper!! 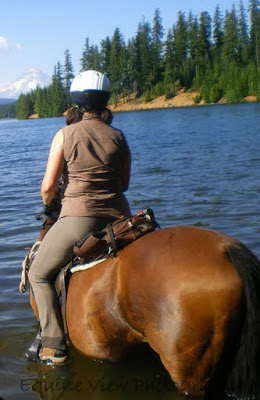 Getting back to the trailer again...we all cooled off! 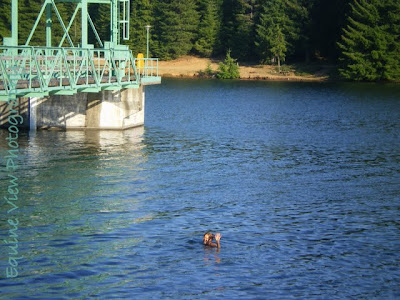 Next time, I will go all the way in and swim with the mare! She really did seem to like it! 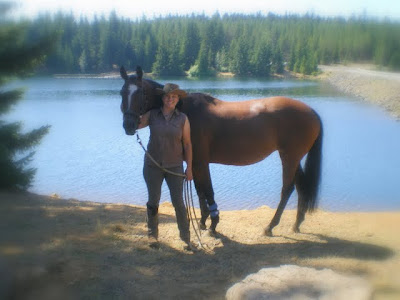 Posted by allhorsestuff at Friday, August 07, 2009