Away with the mare and friends 2nd day 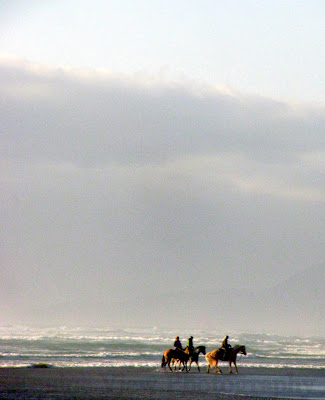 Though the day, our first whole day at the beach, was somewhat windy and grey sometimes.....
we liked it all the same!
The morning was lovely...looking over the bay through the Calla Lillis. 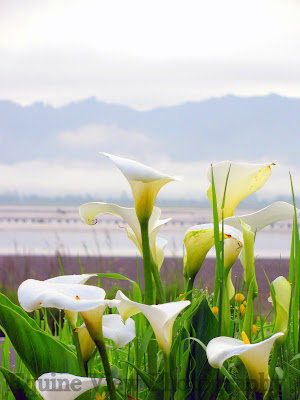 Then the riders started to groom and ready the mounts, for another time on the sandy shores. 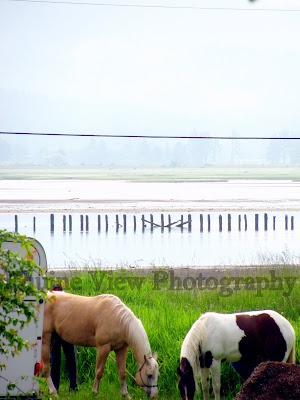 It was a unique day for all of us riding. Jules and I, being veteran beach riders...know of the difficulties and sometimes, unusual behaviors our horse partners may display.
Like Rolling...horses sometimes find the deep, soft sand overwhelmingly inviting and are overcome with the erg to go down in it = and ROLL!
For our little 5 yr old paint, Willow, she really was uppity at times, like all our horses can be when they get their adrenaline going. Her human partner decided to not fight, but to do ground work on the way to the beach. It was more effective . 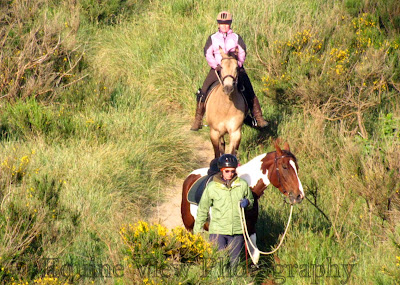 Other behaviors are a strong sense of  the-will- to-not- move -when confronted with the VAST VIEW OF THE OCEAN! You come over the top of the large, hilly sand dune- that is blowing with grasses...to POP..a huge view of rolling movements and multi colors of blue white and green water stuffs...as far as the eye can see!
Big Sky here got "the stops" with the sight..so Maddy mare lead the way down the hill. 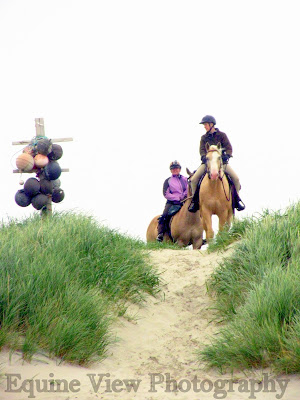 Once we hit the beach...it was nice to just chill out and stand. Jules enjoyed her mares willingness to do just that...as we trotted and cantered in circles and patterns around  and about her, for a time. 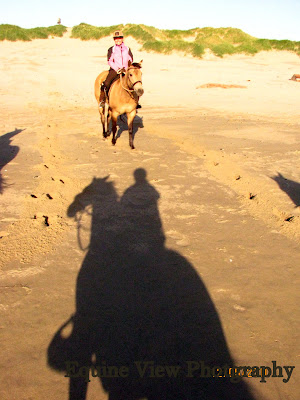 I had my mare's pissy "I'm not going to focus attitude"...so I calmly  kept at it, till I could get a round bending circle and some serpentines. I just refused to look at her. She does feel my focus and the dead body stance of a- stare- at -the-head- rider. I chose not  react.. just tons of praise with the slightest effort and forward movement and ear stance.
More movements for misbehaving and less for a willing mare!
The worse, in my opinion, issue on the beach though...Is The horse that gets dizzy in the waves!
This is not a chosen willfulness, by the horse, just a certain problem that many do have.
Willow Here...rocked somewhat sideways, as I looked on her and her rider once... 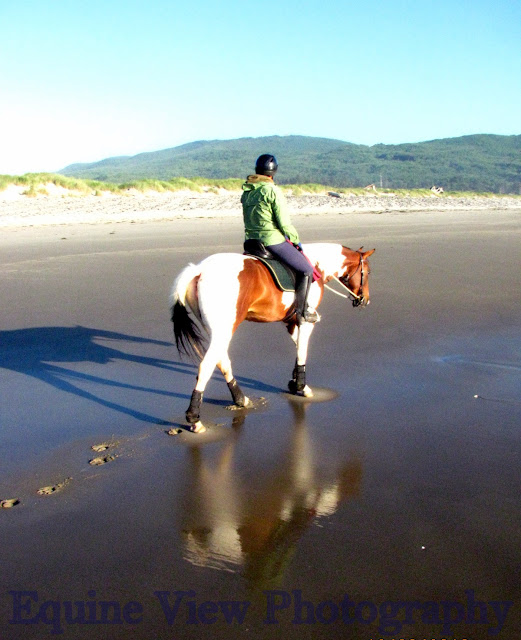 .... I have found that heading into the oncoming waves/and likewise, as they retreat, become vertical with them, by facing the direction they travel. Remaining Perpendicular...can mean...
"Horse and Rider down" FAST.
I have seen it happen, a few times, without damage...but a certain loss of confidence in both horse and rider will ensue.


We headed up the beach..I found it easier to stay a way
s away from the others...it excited my mare so much that going towards the water was my training technique this time...it soothed her and trotting in the moving waters made her think and have to work it out. It felt so neat to be so buoyant as well, her lifting her legs higher.
Jules had her Video cam camera on so maybe sometime...I will get to see us in action..photo and moving pictures too!
They began to canter up the beach, so I joined them, from where I was.
I quickly got my camera out, and got them in a row! 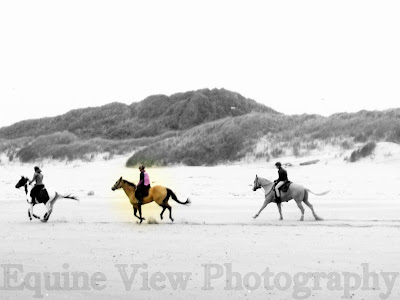 After spending about an hour down at the beach, then went back for our delicious brunch.
It works out nicely to take turns at the main meals on these trips. I made dinner Saturday eve.
We gave the horses a much needed break and brunch delight after ours, as well! 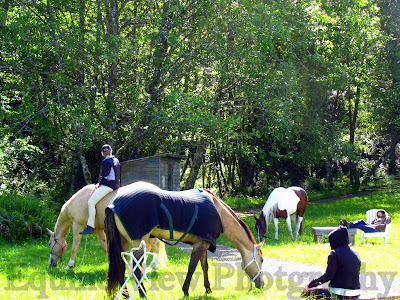 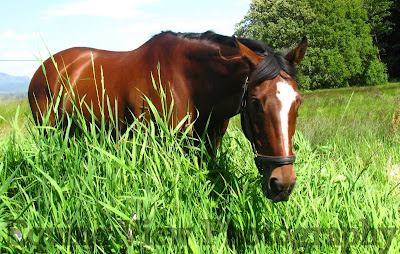 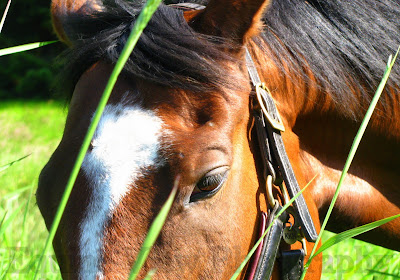 We also did something I had NEVER done...we watched
"The
Lone
Ranger"!!! 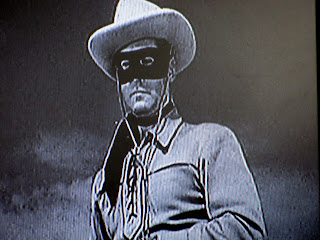 I found it quite hilarious for the terms and slogans they used..that were all true! Hours had passed and we werte a bit lulled and tired ..but rallied for a Sunset ride.
We  made a quick dinner and decided to have it on the beach-picnik style....
We rode out near sunset...the horses were in TOTAL and utter disbelief! It was cold and windy and we ate as fast as we could... 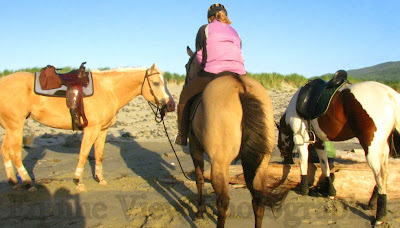 Jules stayed aboard Maddy mare and forwent the dinner...till later...we were all quite tired and dismounting just was not appealing to her. 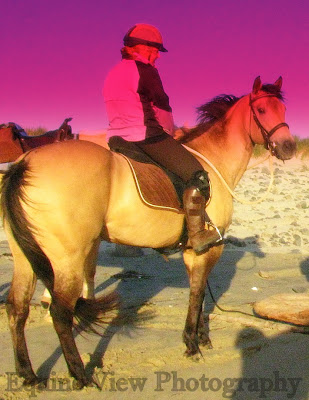 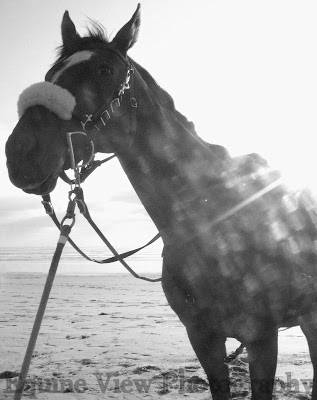 We headed away and back towards home...it was Coooolddddd, in the partially clouded sunset. 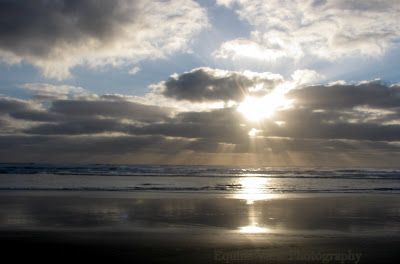 I decided then...that was all my mare would have to do this beach trip, instead of trying to ride before we left the next day.
Maddy and Jules...riding in the sunset of the Oregon Coast 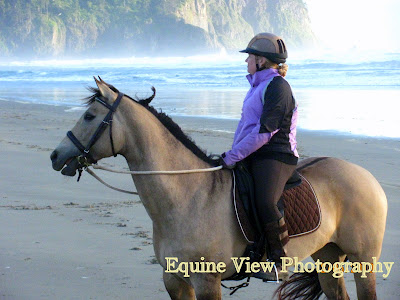 Thanks Jules, for coming along for my special treat, making it even more special!
Nice to ride with a group of dedicated, and devoted horsewomen too!
I look forward to meeting you on the trails this summer...yea
Posted by allhorsestuff at Wednesday, June 16, 2010

Email ThisBlogThis!Share to TwitterShare to FacebookShare to Pinterest
Labels: BOH Julie and stable