. . . .I rode the dog﻿, but there are NO photo's of that!
Just this "slide" and some other raggity pics, documenting the beginning of my Love affair with all things horse! 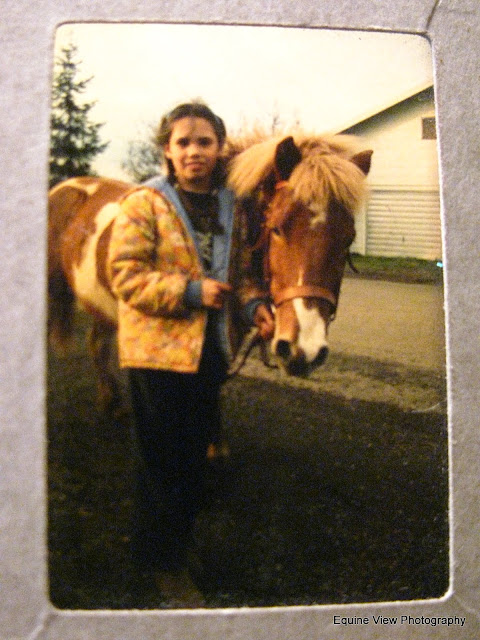 I read this wonderful Post that "GREY HORSE MATTERS" wrote, and it got me desiring to tell you all my riding beginnings,
Here goes!
The above slide is of
my PONY TRIXIE and me...must have been fall of 1969-cause I got that -NEW-Light Leather Bridle, for my 8th birthday!
Trixie herself, was my 7th Birthday present.
Recently mom went through  "some" of our family photo albums, and gave these to me yesterday.
I was complaining about not having any photo's of my Trixie pony.
Sorry to say, very poor quality images here, as I took photos of really OLD photos!
(yea, I'm feeling it)

I was wanting and wishing that it could be me, upon those wonderfully large and amazing horsey creatures, my mother and sister  floated  the sky upon.
So, they thought they would give me the chance to FEEL what it was like up there.
At  4 years old, when they did set me up on Bunny mare, my sisters first horse....they had no idea..
( THAT EQUINE LOVING GENE GOT IGNITED!)

NOW-I WAS HOOKED on horses!! 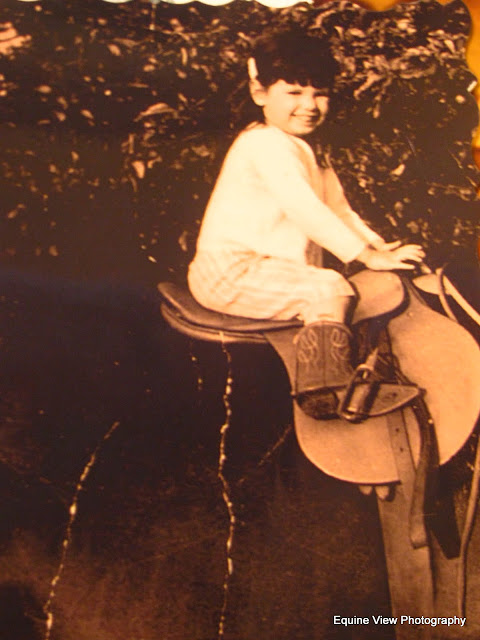 My sister and mother, were responsible for my" horse gene" as it is described.
Mom, in her younger days in Grants Pass, Oregon 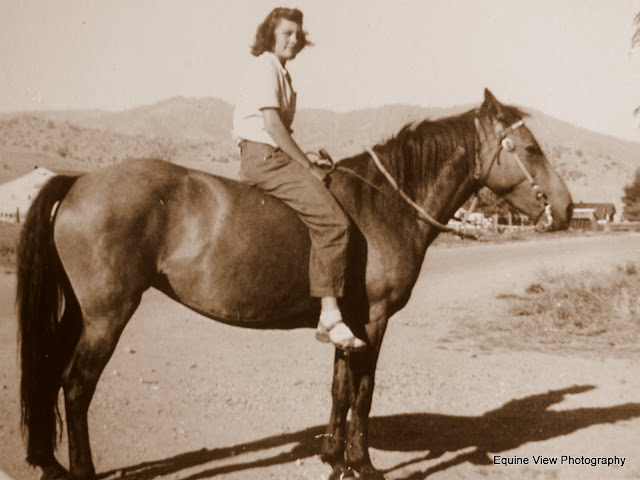 And again mom, many moons later, and now with 3 daughters (two of which she passed the" Horse Gene" to).
This was part of our 10 acre parcel. Dad had made a track for us to ride on. My mother is on "Verda's Star" Washashe Grand Dam. 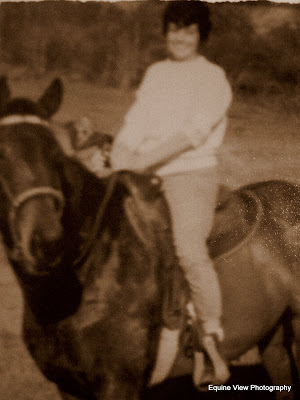 My sissy on one her first horse rides ...and my mom reliving her childhood dreams, through passing the "Horse Gene" to her! 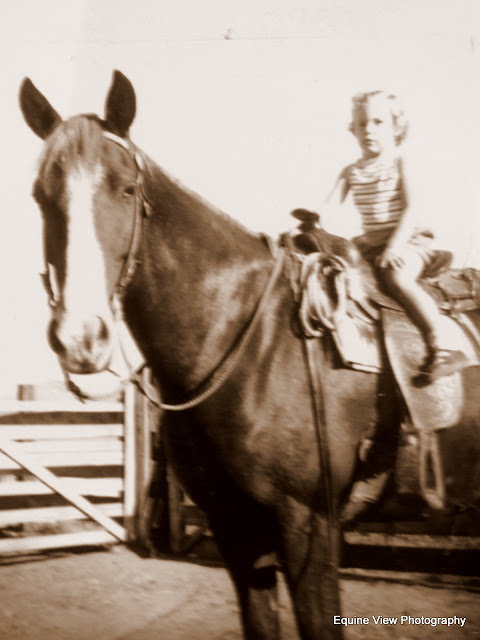 My Sis rode that dream through United States Pony Club, then "evented", all over the countryside... then had a successful side business, giving dressage and jumping lessons. She also worked  10 years with the Portland Mounted Police, training horses and riders for the downtown work.
She is on My mare's half brother, here. 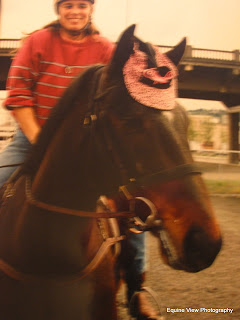 Before the pony and even the dog riding...for me...was the "Stick Horse" 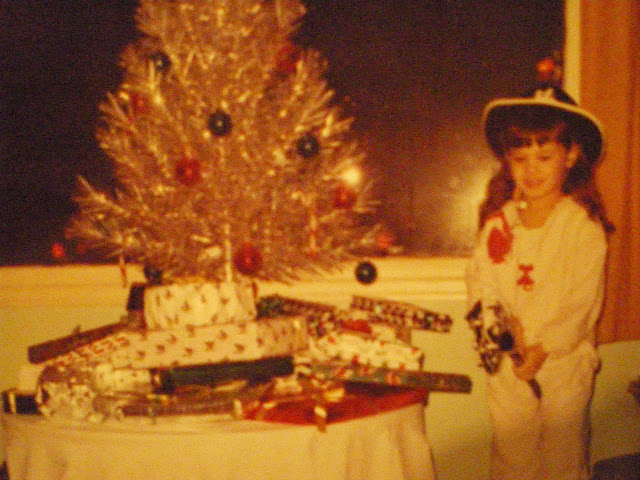 I soon became tired of that stick pony...the dog came next, but before I got into too much trouble with that
dog...they found me a pony!! 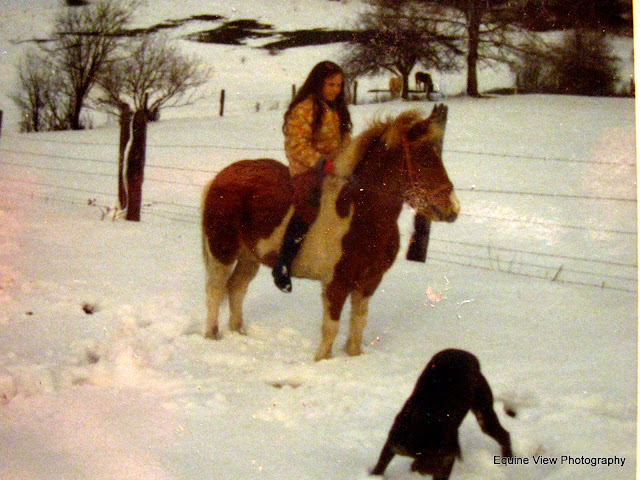 I loved my Trixie pony! She was the best ever, and we went absolutely EVERYWHERE.
I was eight in most of these photo's, our first snow!
The large field below us is where I had to ride, when I was grounded.
My father had made a track around it and we set up jumps sometimes, on the flattest areas. There also was a creek that ran through the middle. The creek made for hours of fun, jumping  and walking in it! At our fence line, a nieghbor boy, Mike Nickols, lived...he had a pony too...but was afraid to ride it.

My sister's trailer behind Trixie,Victor, the German short hair and I 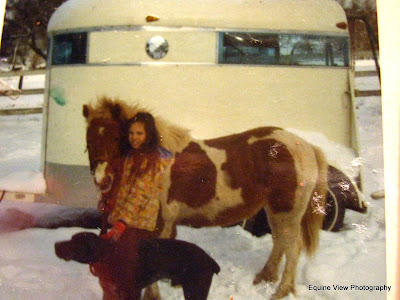 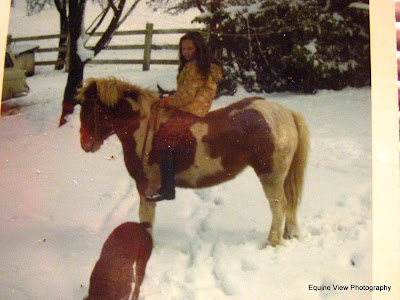 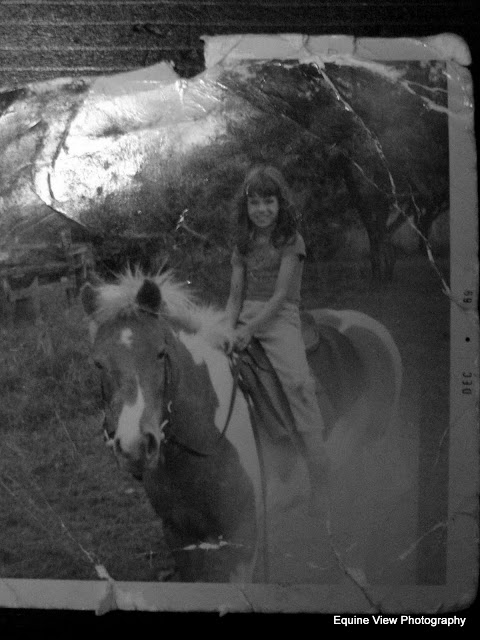 My Little Shetland/Welsh Pinto pony Trixie, took me to so many cities...only touching 1 or 2 roads back then. That was before housing developments were so popular.
We'd take off from our driveway in West Linn, travel down to "Chaffy's fields", go through  "Green Fields". The "Green Fields were a series of fields and trails in between them. Altogether, there were 8.
And by a rough estimation of miles, since I clock miles with my GPS frequently now, it may have been 7 or 8 miles- to my pony riding partners barn, over looking the Willamette River.
My Pony riding pardner, Lisa Shennamen, was my  baby sitters daughter.  That was convenient!
From there, we would ride private fields down to the city of Willamette, take a road through the city and then join up with a series of fields and trails- all the way to Lake Oswego.
The Lake Oswego Hunt Club was where my sister rode in Pony Club.
I dreamt of riding in the BIG ARENA!
Oh, so many stories to tell...but this is only the "Beginning" so will leave the other tales, for another time. 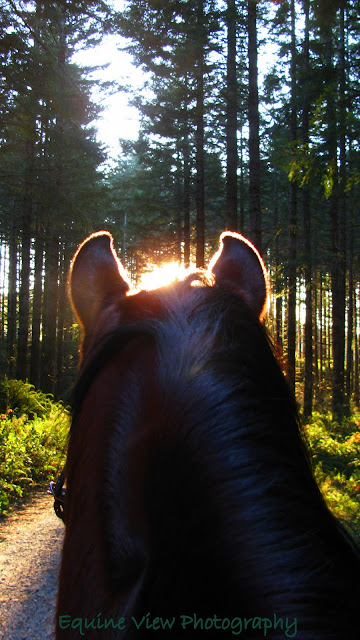 Adieu for now ~happily in love~ Still riding into the sunsets, thanks to My Trixie pony and now,
Washashe mare!
Posted by allhorsestuff at Tuesday, November 02, 2010