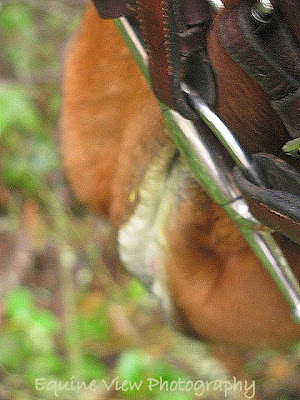 I have not gotten to ride very much, with my mare being lame for a few weeks and also...the weather has been icky poo!

So today was ride 3 in 3 weeks and there are some NEW Goings on to report with us these days. I actually noticed some of these last month..but since the nice changes have continued, I thought it worth mentioning here!

Firstly, I learned a new leg, seat position at my last clinic ride on another horse and it has greatly helped my mare relax. She reaches down, and stretches into the contact so much more. I thought it to be the bitless bridle at first. She really enjoys the freedom. (But one of our last rides out..she challenged me with what direction we were heading...I did not have good control, I found out suddenly as she was able to ignore the pulling of the bitless..and then we were going a new direction I asked for NOT!)

So,  not having ridden her in so long I have to admit , I  wanted to know we could stop and also stay the desired (by me) course.

The second thing, is because I did put the bridle on the last 3 times I have gone out. I  used her full cheek, jointed with a roller, snaffle. Which leads me to the second wonderful thing....she is really, really frothing now...not just lipstick in white, but enough to settle down at her lips and sometimes it floats off, away and unto her legs as we ride.

It is way cool to know that her jaw is loose and she is relaxed enough to make the froth!

So today we went down the paved road to graveled service roads, around our trails. It was Windy!

We were going along and suddenly, we startled a deer apparently, which in turn- started my mare to slip into a canter from a shuddering walk. I had booted all four hooves..and the smooth road is not a good surface for this speed...she calmed again quickly.

Other than that little freaking..she was great..not a sign of lameness.  I  did notice something  before booting her.( I trimmed her hinds right before to fit into the boots) She has barely any heal in the hind...and I bet ya since I had her trimmed the week before she went lame, that is a reason for it...kinda a huge difference. I am not sure why I did not notice it right after..I do trust my trimmer but. Maybe she had too little left for such hard frozen ground!

Onward and forward...into the New Years tidings...be well my friends! Posted by allhorsestuff at Friday, January 01, 2010